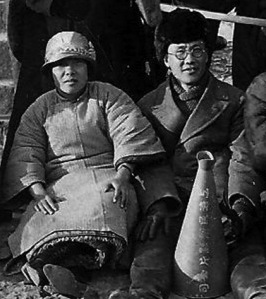 In histories of early Chinese cinema, Pu Shunqing is only mentioned in passing as China’s first female scriptwriter for Cupid’s Puppets (1925), a Great Wall Film Company film co-directed by her husband, Hou Yao, and Mei Xuechou. The film is noted as the first Chinese film narrated from a female perspective (Li and Hu 143). Great Wall was founded in Brooklyn, New York, by Chinese students studying in the U.S. and then relocated to Shanghai in 1923. Pu had worked for Great Wall as a scriptwriter and as an actress between 1924 and 1926 before she moved on to Minxin Film Company where she wrote her next three screenplays. Although her contributions are rarely discussed or even known, until the late 1920s, Pu was the only woman to be credited as a scriptwriter both in film prints and publicity ads. 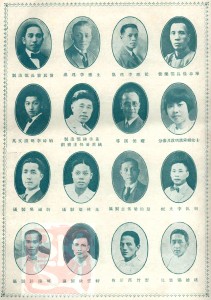 Before making films, Pu Shuqing was already a known playwright. While majoring in political economy at Southeast University, Nanjing, Pu pursued her love of stage drama by writing for and performing in the Southeast Drama Society, a club she co-founded with her then-schoolmate, Hou Yao (Law 42; H. Li 23). Pu’s renowned three-act play, “Paradise on Earth,” twists the plot of the Book of Genesis by introducing a female character, “Wisdom,” who encourages Eve first to eat the apple in the Garden of Eden and then to build a paradise on earth. Eve then persuades Adam to work hard on their own paradise, playing “an active role in shaping her own and Adam’s destiny” (G. Li 3) while reversing the literary pattern of women as receiver of men’s enlightenment (Liu 116). Pu’s call for women’s liberation is loud and clear when “Wisdom” declares, “if you don’t believe in God, he will disappear.” Before the curtain falls, the character of God actually disappears. Her one-act play, “Daybreak,” presents a nameless “woman” and her husband “man,” whose peaceful rural lives are disturbed by the appearance of a Factory Demon. The Factory Demon takes them to the city where they encounter Money Demon, Ethics Demon, and Public-Opinion Demon. The demons enchain the woman’s body and her husband cannot save her. “Wisdom” appears again, bringing a light of Consciousness and encourages her to fight.  When the woman begins to fight the demons herself, nine fairies with lights marked Independence, Autonomy, Self-improvement, Self-encouragement, Self-respect, and so on help the woman rise to her feet and tear off the chains around her body (Pu 1927, 96-98). As later critics observed: “although adopting a non-realist form, it touches real problems of society and thus carries a realistic significance” (Chen and Dong 129-30). 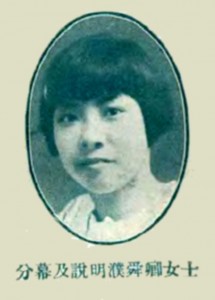 Major dramatist and director of early Chinese film Hong Shen notes the mutual influence between Pu and Hou, particularly when it comes to style and didacticism, but it is possible that Pu also had an impact on Hou’s advocacy of women’s rights during their years of collaboration (93). The first film they made together, The World Against Her (1924), was adapted from a play Hou had written during his years as a college student. Both the original play and the film script focus on the troubled life of Zhifang, a young mistress who, disowned by her husband’s family, is left to struggle against various patriarchal forces as a young female professional. Pu played the role of her maid, Cailan, in her screen debut. While the original play has Cailan ultimately sacrifice her life for the sake of her mistress (Hou 1929, 61), the screen adaptation offers a more optimistic view of women’s future by allowing the lower-class Cailan to survive her mistress as a figure of hope and strength, one who promises to carry on Zhifang’s unfinished quest for women’s rights (Hou 1925, 163). In retrospect, Cailan and Zhifang’s relationship might be considered a precedent for the pairing of the working class activist A-ying and struggling writer-teacher Wei Ming in Cai Chusheng’s famous film New Women (1934). 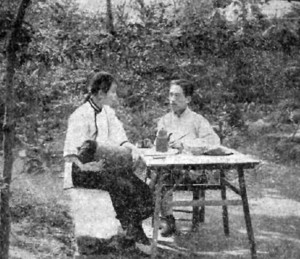 Following The World Against Her, Pu adapted her own play “Cupid’s Puppets” into a film script that depicts what one journalist described as “various situations regarding love and marriage—such as misinterpreting something else as love, wanting love but failing to get it, or rejecting love but still being loved” (Jun 14; Qian 12). Compared to her earlier works, Cupid’s Puppets is more of a melodrama.  The heroine Guoying’s stepmother and evil cousin-in-law want to trick her into a marriage so they can steal her inheritance, but she fiercely rejects their scheme and ends up in an insane asylum where her cohabitants are two women who are both driven mad by broken hearts. The rejected suitor Renjun manages to infiltrate the asylum and proposes that they escape together. Guoying asks: “Where are we going after leaving the madhouse?” Renjun replies: “Let’s find a life in a new society!” (Pu 1927, 82). The film presents a unique perspective through the complexity of Guoying’s character. As the heroine, she not only rejects an arranged marriage but also hesitates about the hero’s love proposal, wanting, above all, her own autonomy and independence. Even after she accepts Renjun’s help in escaping, the question as to whether they will remain “friends” or become “lovers” is left unresolved. The accessibility and theme of both The World Against Her and Cupid’s Puppets made them a good fit for Great Wall’s commitment to making “problem dramas” or films dealing specifically with social problems (Harris 54; He 1065-6). Moreover, many such problems center on how women relate to love, career, independence and self-assertion. 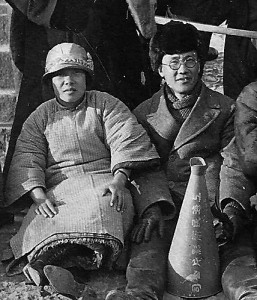 Although the films Pu Shunqing wrote screenplays for between 1926 to 1929 are seldom discussed, they were from her most prolific period. Pu and Hou married in late 1926 and both joined the Minxin Film Company where she began by assisting Hou in editing God of Peace (1926) before being entrusted with the roles of scriptwriter and assistant director for Way Down West (1927), a film based on the ancient Chinese drama Romance of the Western Chamber (Pan 511).  The story is an ode to freedom of love, but it seems that Pu and Hou focused more on the period visualization of the tale rather than giving the heroine Yingyinga stronger subjectivity, as they did with their modern female characters (Harris 72-3). Later, Pu and Hou co-wrote Divorcee Comedies (1927), a comedy attacking arranged marriages by ridiculing the “God of Matchmaking” as the victim of a bad marriage himself. 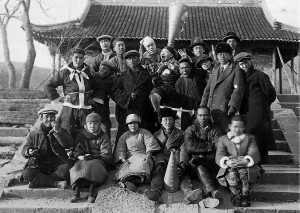 As regional tensions escalated in Asia, Pu’s work also shifted towards more patriotic concerns. Pu wrote the script for Cai Gongshi (1928), a film based on recent events involving a Nationalist Party emissary, the title figure, who was tortured and killed by Japanese soldiers. To write the script, Pu interviewed Cai Gongshi’s widow. Both Pu and Hou were also involved with various underground anti-Japanese activities including transporting arms for the Chinese army before the second Sino-Japanese war officially broke out in 1931. Another patriotic film project was Mulan Joins the Army (1928), which required them to travel with key production figures to Northern China and acquire the help of a warlord general who offered his soldiers as extras. The film took four years to complete and included landscapes from four different provinces, but still failed to compete with the Shaw Brothers film of the same title released just slightly earlier. In fact, the failure of this project resulted in the Minxin company filing for bankruptcy. When it was absorbed by United China Film Company in 1930, Pu’s filmmaking career also ended. 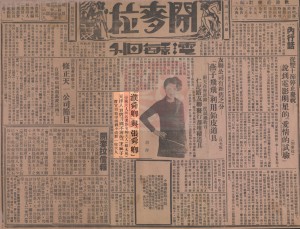 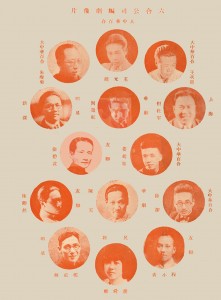 While working for Great Wall and Minxin, Pu remained active as an independent screenwriter, ambitious professional, and public figure. She wrote several screenplays that, although they received prizes, were never filmed. The newspaper Shenbao reported on her winning the first prize for Hibiscus Tears in the Anti-Opium Screenplay Competition of 1926 as well as the second prize for Her New Life in a competition organized by the Young Women’s Association in 1927 (1926, 15; 1927, 15). We know from a 1932 newspaper report and also a 1935 new year’s resolution she published in Shenbao that Pu became a lawyer in Tianjin while continuing to write screenplays (Wei n.p.). In her capacity as both writer and lawyer, she contributed to books such as Life of Soviet Women (1935) and acted as a legal consultant for Shenbao by answering readers’ questions in a special column. During World War II, she is mentioned once in the press as a jury member in a school drama competition. She even ran for office as congresswoman after the war.  The 1946 article that announces her intentions, however, still identifiesher as Hou Yao’s wife even though they had long since separated. The last mention of Pu in Shenbao announces that although Pu was not elected as a congresswoman, she was named as a candidate to represent women’s organizations in the National Delegation of People in Nanjing, China’s capital at the time (1947, 2). 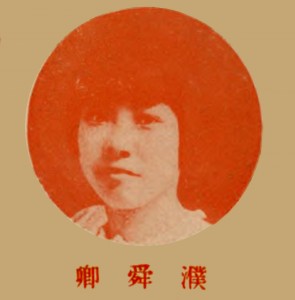 Looking back at the history of silent cinema in China, Pu Shunqing is not only the first woman scriptwriter, but also the only university-educated woman working in China’s early film industry. Her career began with writing, but moved quickly into social practice. In every sense, she should be remembered as an unabashedly feminist writer and a true champion of women’s rights.

The author generously thanks Mr. Lai Shek and Mr. Frank Bren for the images in this entry.

He, Xinleng. “My Impression of Films of the Great Wall School”/“長城派影片所給我的印象.”  Great Wall Special Issue of The Hypocrite/長城畫片公司特刊 僞君子.  Shanghai, 1926. 1065-6.