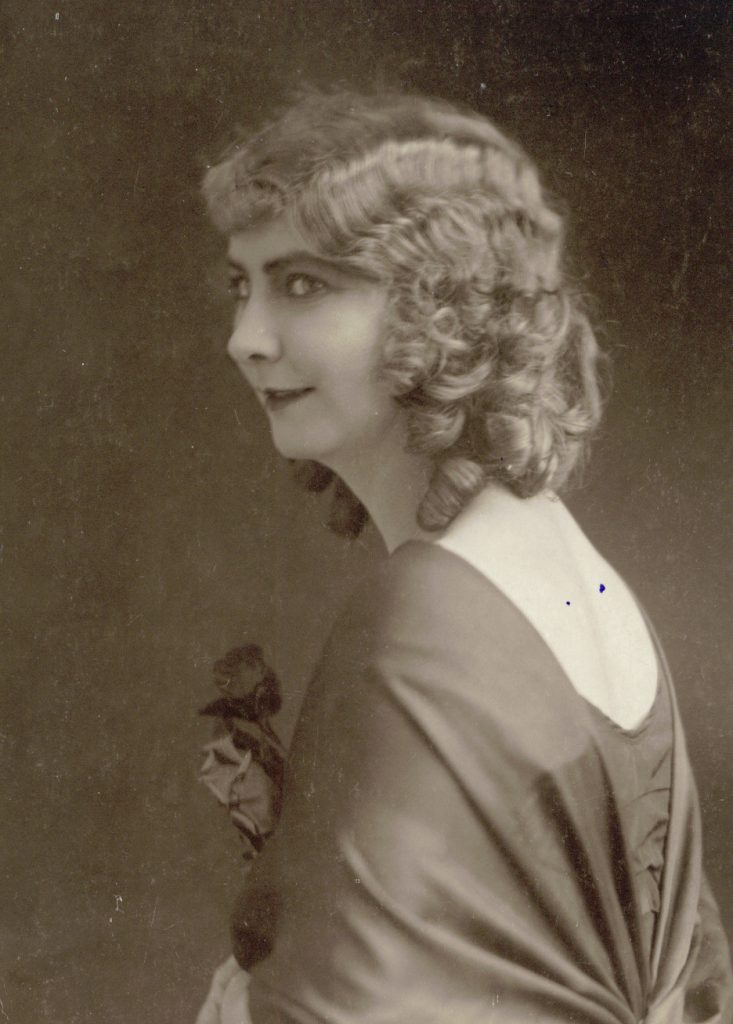 “Frygten for Døden var ikke så stor/Større var Frygten for Livet på Jord” [Trans.: The fear of death was not too great/Larger was the fear of life on earth]. These lines, written on Emilie Sannom’s headstone, are from a commemorative poem composed by the famous Danish author Tom Kristensen at the time of Sannom’s tragic death in 1931. Sannom died in front of an audience of 8,000 people when her parachute did not unfold while performing an aerial show in the Danish town of Grenaa. Her early death–she was only forty-four years old–marked the end of a remarkable life and career.

Sannom was born in 1886, in Copenhagen, to Fritz Emil Sophus Sannom (1854-1935), a first mate and furnace stoker on a ship, and Johanne Kamilla Hansen (1861-1936). In 1887, the entire family immigrated to Florida where they unsuccessfully ran an orange plantation. After seven years abroad, the Sannom family returned to Denmark and settled down in Copenhagen, where Sannom’s mother dreamed of seeing her daughters on the stage. According to Sannom, she made her theatrical debut as an extra at the age of nine, and her sisters, Charlotte (1884-1954), Thora (1893-1954), and Ragnhild (1896-1953), acted on the stage and in films as well (Nielsen 2003, 914). Sannom continued to perform in Copenhagen theaters, and also toured the Nordic countries before making the leap to the new medium of film.

Emilie Sannom as Ophelia in Hamlet (1911). Courtesy of the Danish Film Institute.

According to Sannom, she first appeared onscreen, between 1907 and 1909, in small parts in productions by the leading Danish company of the silent era, Nordisk Films Kompagni (Nørgaard 1992, 116; Nielsen 914). However, the first film that we can be certain that Sannom participated in was Gøngehøvdingen/The Partisan Chieftain (1909), made by Biorama. In the company Kosmorama’s famous Afgrunden/The Abyss (1910), which launched Asta Nielsen’s career, Sannom played a supporting role as the flirtatious Lilly, who tempts Nielsen’s lover and gets into a fight with Nielsen. Nielsen and Sannom also appeared together in Balletdanserinden/The Ballet Dancer (1911), produced by Nordisk. In another of the company’s productions, Hamlet (1910-11), Sannom played Ophelia, Hamlet’s wife-to-be. In a spectacular scene, Sannom throws herself into the castle moat, and thereby became the first stuntwoman in Danish cinema and laid the groundwork for her reputation as a daredevil. 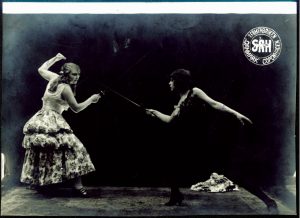 It was Sannom’s engagement with the Danish film company Skandinavisk-Russisk Handelshus/Filmfabriken Danmark that led to her fame. The company specialized in the genre known as sensationsfilm–films featuring spectacular action scenes and stunts. Sannom signed her first contract with the company in 1912, at the same time that the French film company Pathé Frères offered her a lucrative contract of 2,000 francs a month. However, Sannom chose to stay in Denmark. From 1912 to 1919, she was part of the company’s core staff and became its main attraction, marketed as “Danmarks Vovehals Nummer Et,” or “The Number One Daredevil of Denmark.” In numerous films, she performed her own dangerous stunts: participating in wild car or motorbike chases, performing balancing acts across a dangerous abyss, or hanging on the rotating blades of a windmill. “I’m born with the conviction that whatever will happen to me, I’ll make it,” Sannom once said about her stunts. “I’m never going into panic, never clueless, never senselessly flustered” (qtd. in Debora 4). Besides doing her own stunts, Sannom also worked as stunt double for the company’s other actors (Nielsen 914). It is unclear if Sannom designed her own stunts, but as Skandinavisk-Russisk Handelshus/Filmfabriken Danmark worked with a small central staff, a plausible assumption would be that she collaborated in the staging of her stunts. Hardly any of Sannom’s films have survived, but a short compilation of her films, Filmens Vovehals/Daredevil of the Movies (1923), gives an impression of Sannom’s spectacular stunt work. 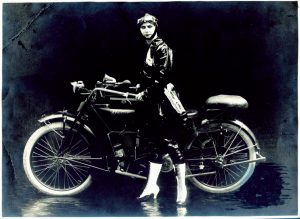 As a member of the core staff at Skandinavisk-Russisk Handelshus/Filmfabriken Danmark, Sannom was also involved in the creation of two scripts during her time there. The extent of her contribution is uncertain, but she is credited for the script of For Barnets Skyld (1915), in which she also had a role. It also seems very likely that Sannom came up with the scenario for the film Elskovsbarnet (1916), which is now lost (Nørgaard 73; Nielsen 609). More research is necessary to better understand Sannom’s possible screenwriting endeavors. 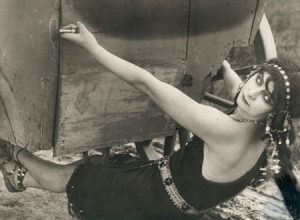 In 1919, Skandinavisk-Russisk Handelshus/Filmfabriken Danmark ceased production of fiction films, and Sannom went back to the stage, performing in Denmark, Norway, and Germany. Sannom returned to the screen in the early 1920s, making two films in Germany: Die Frau im Delphin (1920) and Das Land der Finsternis (1921). Additionally, invited by a fellow-countryman, director Alfred Lind, Sannom shot La faniculla dell’aria/Mistress of the Sky (1923) in Italy, which was ultimately her last film. From then onward, she earned her living performing on the stage and in the circus, as well as performing parachute jumps from airplanes, sometimes only wearing a bathing suit and high-heeled shoes. In 1929, she tried in vain to get a pilot certificate, pretending she was six years younger than her actual age. In an interview from 1919, Sannom, unwittingly prefiguring her own untimely death, explained: “Life is not worth living without danger, and if death arrives, well then it arrives…” (qtd. in Nørgaard 107). 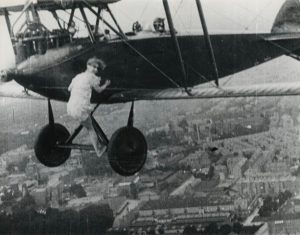 In her time, Sannom stands out as a modern, emancipated woman. During her career, she supported herself and her family economically. She gave birth to a daughter, Grethe, out of wedlock in 1912, and never hid the identity of the father, the actor Axel Schultz (1890-1974), whom she considered a good friend. Though she had many admirers, Sannom never married. In an interview from 1925 with the headline: “What would you have done if you had been a man?” Sannom replied: “I would have been a really wild cowboy” (“Hvad vilde De gøre” 14).

1. Emilie Sannom as Screenwriter and Actress

Although unconfirmed, it is very likely that Sannom came up with the idea for the lost film Elskovsbarnet (1916).