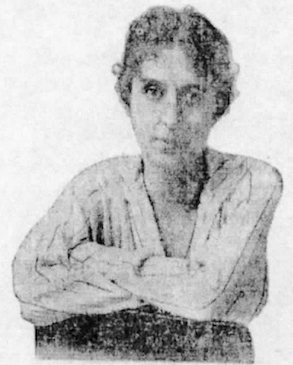 Born and raised in Des Moines, Iowa, Dorothy Gottlieb was a family friend of A.H. Blank, who owned the largest circuit of movie theaters in the city and elsewhere in the state. In 1914, she and Mrs. Blank won top prizes in a card game involving forty paired players (“This Page”). In August 1915, she began writing a “News of the Movies” column for the Des Moines Tribune. As the newspaper’s coverage expanded, she eventually was identified as the editor/writer of all the material printed under the “News of the Movies” banner and assumed the nom de plume of Dorothy Day.

Often chatty and colloquial in her communications with readers, Day also could concisely summarize the essential elements she looked for when judging a movie. In praising The Golden Chance (1915), for example, she focused on the “uncommonly strong” story, with its “well constructed introduction” and unexpected twists that—in a domestic metaphor shared with several other women writers—so neatly wove together the plot’s three “threads” into the film’s “exquisite texture” (“News of the Movies” [28 January 1916]). 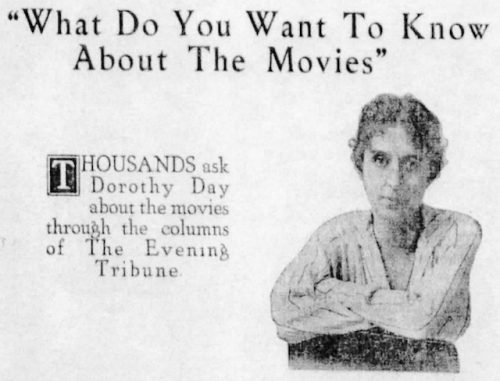 In September 1918, a Tribune advertisement promoted Day as such “an authority on photo plays” that “her name is a household word in nearly every home in Des Moines and Iowa” (Advertisement). She continued to be as chatty as before, directly addressing her readers as “girls—gurls—girruls!” when claiming that they might prefer a more ordinary player like Herbert Rawlinson to familiar stars like William S. Hart and Douglas Fairbanks (“News of the Movies” [8 January 1918]). Similarly, in watching Cecil B. DeMille’s Don’t Change Your Husband (1919), neither she nor the “girls” in an afternoon audience could resist the “he-vamping” of Lew Cody, and they “giggled and laughed  […] at the typical ‘husbandish’ details” (“News of the Movies: Don’t Change Your Husband”). While fans “stormed the Rialto” to see Salomé (1918) one Sunday, Day seemed unsure if what appealed was the horror of the story, Theda Bara as “a creature of evil,” or her plentiful costumes—even more than she had worn in Cleopatra (1917) (“News of the Movies” [4 March 1919]).

Day’s film reviews continued to appear until the summer of 1920, but, with few exceptions during the last year, they became shorter and less trenchant, perhaps because, from April through November 1919, she also penned a column in the Des Moines Sunday News that drew on publicity materials to summarize the new feature film releases of the coming week. She already may have been transitioning to a new position, for Dorothy Day disappeared around the time that Dorothy Gottlieb became head of the public relations department first for Blank’s circuit of cinemas and eventually for the Central States Theater Corporation, aligned with Paramount, from 1933 to 1965.