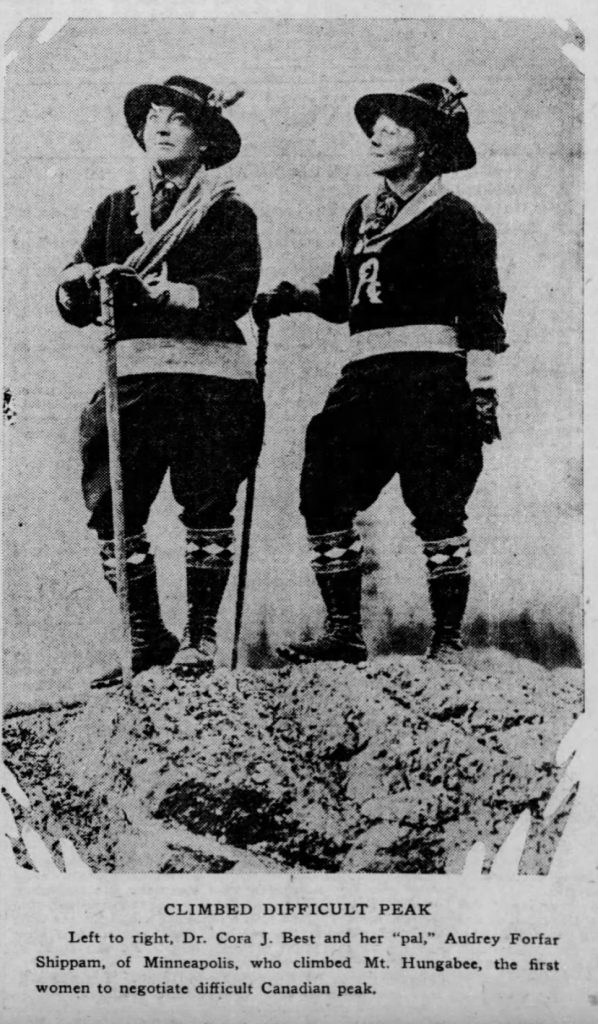 Through most of the 1920s, Cora Johnstone Best and Audrey Forfar Shippam engaged in what seems to have been in this period a rare if not unique form of professional collaboration, with Best delivering lectures illustrated with lantern slides and motion pictures that had been shot by Shippam during the pair’s adventures in the remote Canadian Rockies. Best, a medical doctor who became widely known for her mountaineering exploits, had been a public speaker since at least 1918. Her active career as a lecturer lasted from 1922, when she was hired as a representative of the Bureau of Commercial Economics (BCE), until her death in 1930. During these years, the film lecture was a widely popular nontheatrical exhibition format, and Best was possibly the most successful woman in the United States working in what was an overwhelmingly male-dominated field. After Best’s death, there is no record of Shippam (who lived until 1975) continuing to shoot film or to create hand-colored lantern slides. Unfortunately, none of the motion pictures shot by Shippam for use in the lectures seem to have survived.

Virtually the only sources of information about Best and Shippam are the promotional material they generated and the newspaper coverage of Best’s performances. These materials regularly note that both women were married (Best to a doctor, Shippam to an Army officer), but these men never figure in accounts of the women’s challenging treks into the North American wilderness. The press discourse instead highlights that Best and Shippam were “pals” and “companions.” These terms usually appear in quotation marks in the original text, with no other speculation about the relationship between the two women, who, in a widely reprinted publicity photograph, pose dressed alike in stylish trekking attire. Newspaper accounts do not explain how the two women met. Given the focus on Best, the featured performer who was often billed as “the biggest little woman in the out-of-door world” (“Dr. C. J. Best to Lecture in Ju-Co Pay Assembly” 1), it is notable that Shippam is mentioned at all, underscoring the novelty—and likely promotional value—of educated, securely middle-class female pals becoming acclaimed mountaineers and intrepid media-makers. 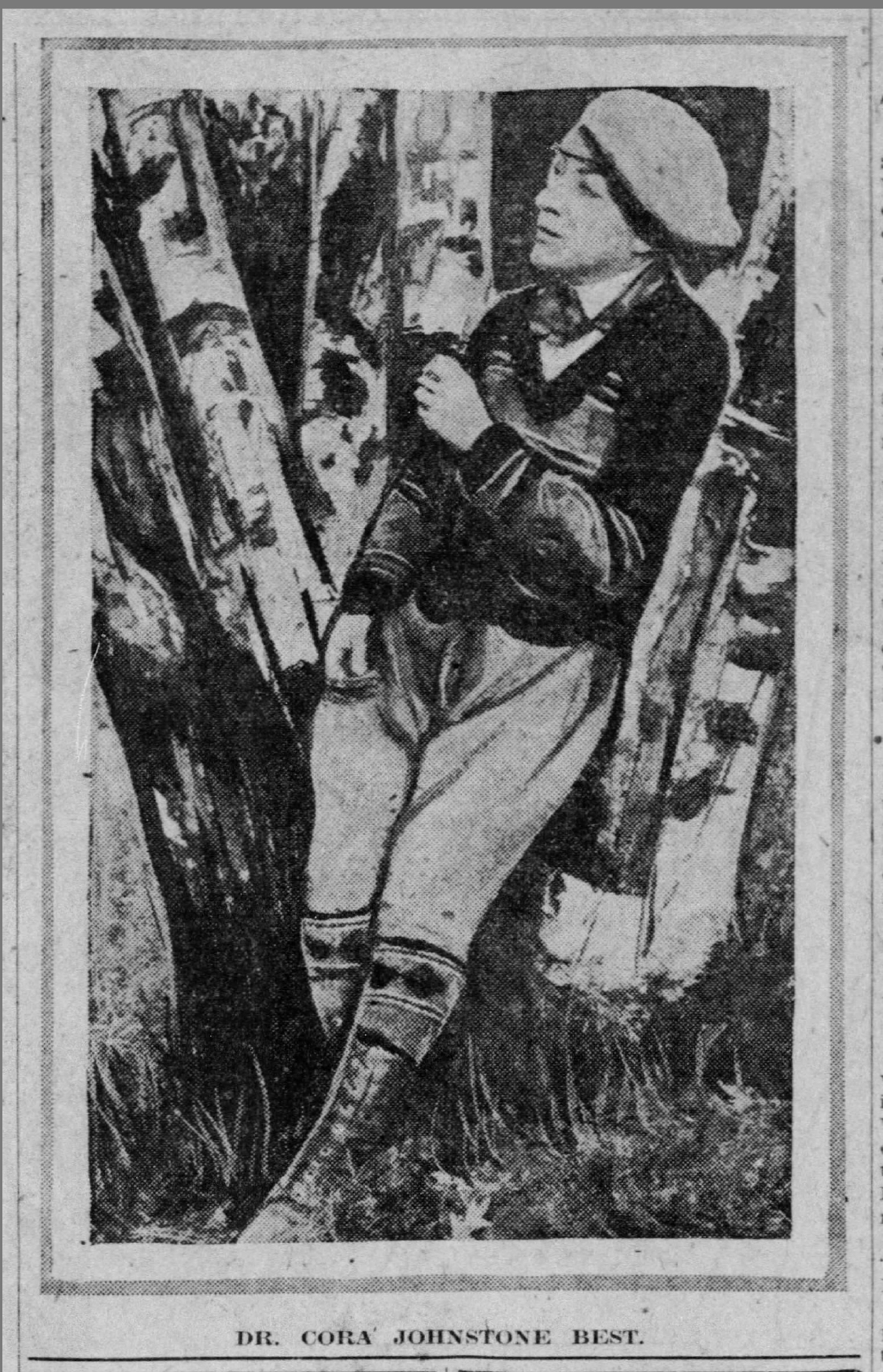 An obituary from her hometown of Minneapolis, Minnesota, described Best as an “internationally known lecturer, mountain climber and huntress” and “a conservationist and leading exponent of outdoor life” (“Dr. Cora J. Best, Mountaineer, Dies” 1). Her success as a traveling lecturer during the late silent film era not only stands as a prime example of what a woman could achieve in the expanding world of nontheatrical cinema, but also underscores the significant role of the Bureau of Commercial Economics in that period. Never actually a part of the federal government, the BCE was incorporated in 1914 as a non-profit organization dedicated to distributing sponsored industrial motion pictures for free screenings. It attracted much attention for its investment in truck-mounted projectors, which allowed films to be exhibited in open-air sites. As Laura Isabel Serna has explained, Anita Maris Boggs, another long-overlooked woman film pioneer, played an essential administrative role in the BCE, which, in addition to hundreds of sponsored films, also had a roster of what it called “special lecturers” (2015, 135-43).

Although initially many of these speakers were men affiliated with commercial firms like Standard Oil and General Electric, by the late 1910s the BCE’s roster prominently featured multimedia “travelogues” that pictured remote regions and thrilling outdoor adventures—with Canada and the American West as prime locales. Hence the logic for engaging Best, whose three lectures for the BCE were:

“Unblazed Trails and Shining Peaks,” covering her wilderness adventures in the Canadian Rockies, climbing previously unnamed peaks over ice fields and “labyrinths of crevasses,” and capturing as well images of rare flowers, birds, and animals (Best 1924, 11);

“Kingdom of the Clouds,” recounting her successful effort to be the first [white] person to reach the summit of Mount Pope in the interior of British Columbia (“Speaks to Clubs of Explorations” 2).

Unlike other BCE lecturers, Best was not directly promoting Canada or the American West as a tourist destination or as a repository of potentially lucrative natural resources. She extolled the benefits, more generally, of strenuous outdoor activity, called for an appreciation of North America’s natural splendor, endorsed conservation initiatives, and pitched “visual education” as a valuable pedagogical tool. Without question, when she was making these points her physical presence and gendered self-presentation registered strongly. According to a 1927 feature article, Best was “a short, rather slight woman, who might be a music teacher or a librarian” (Childs 1927, 93). But promotional notices touted her fearless adventuring. This presumably gave her credibility when it came to criticizing the 1920s version of the American male who, in Best’s own words, “looks like a modern Ajax,” but was weak and easily frightened, not least of all because he thought playing nine holes of golf counted for exercise (“Woman Tells of Adventures” 5). Channeling the spirit of Theodore Roosevelt, Best made clear the all-important racial implications of her critique of modern American masculinity: “the whole life of the white race,” she told an audience in Battle Creek, Michigan, “depends on learning how to live, to eat right, exercise properly, to really live” (“Die from Worry, Not Over-Work” 14). And clearly this responsibility was from her perspective equally important for white women. Best insisted “there is no sex in mountain climbing,” which was not her way of demanding that climbers take a vow of celibacy, but rather her oft-stated belief that nothing prevented women from taking on the challenges of the great outdoors (“Mountains No Barrier” 3). 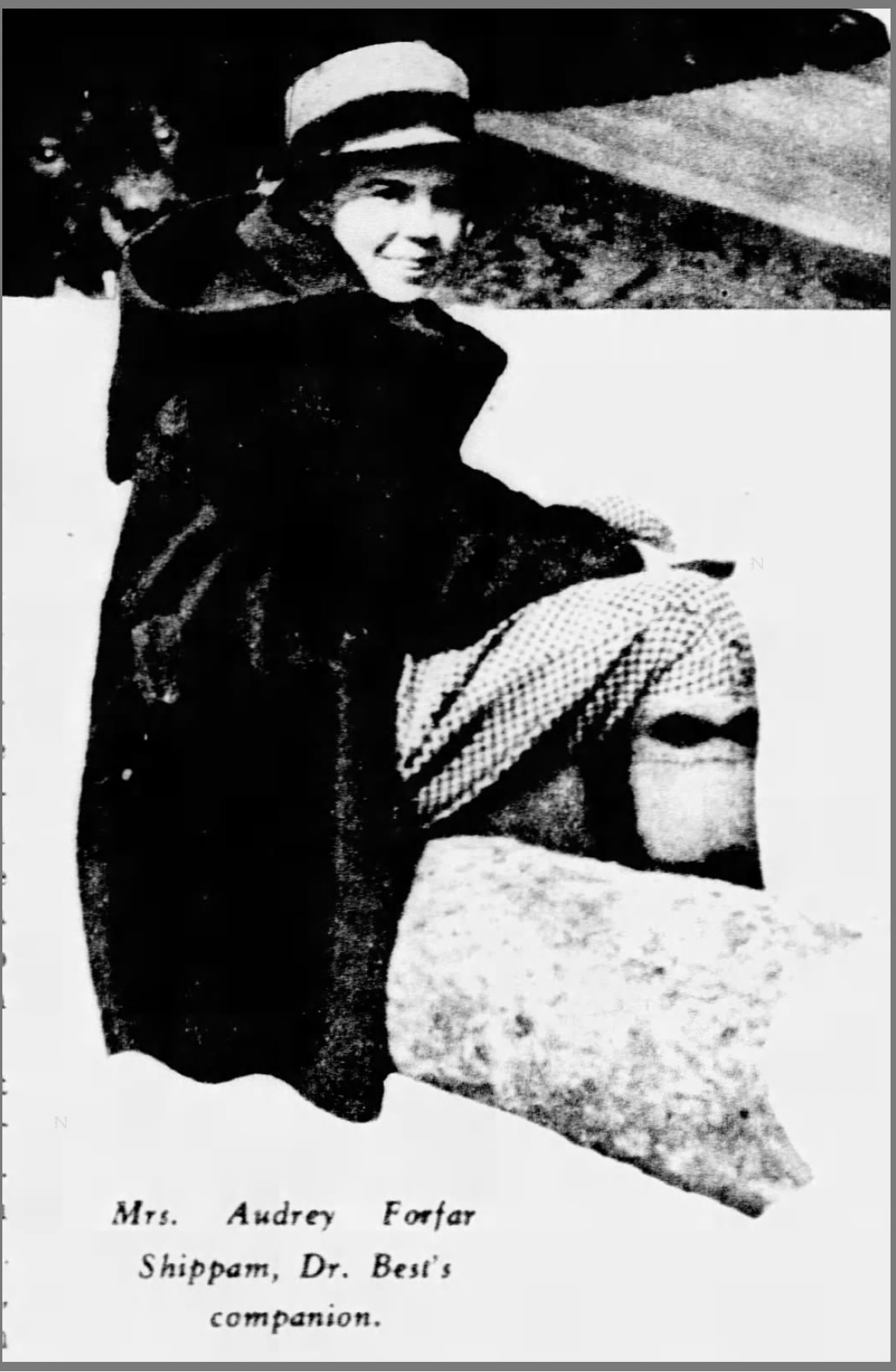 For all Best’s overt messaging, her presentations were not instructional lectures. Best celebrated her own self-styled unprecedented accomplishments. These included that she and Shippam had brought back still and moving pictures that she claimed were:

taken in territory that has not been photographed by anyone else; they are full of thrills from start to finish—enough to satisfy the reddest blooded adventurer; they are educational and beautiful to a degree not often found in combination (“Free Illustrated Lecture” 3).

Best also asserted that the women produced their own slides, tinting them based on notes taken on-site. Shippam’s film sequences reportedly showed perilous mountaineering, revealing “time and again where a misstep or misjudgment would have sent one of the party catapulting down a steep cliff to certain doom” (“Rotary Goes on Tour” 3). According to the Riverside Daily Press, Shippam captured the experience of running the Columbia River rapids with “every turn in the stream a new picture” (3). She also recorded, the article continued, the details of camp life, including footage of Best “doing apparently with ease the heavy work but few would attempt,” like “felling a large pine tree and then hoisting it onto her shoulder, and tramping with it into camp, crossing a stream on a log on the way.” Best accompanied these stirring, one-of-a kind images, reported the newspaper in Fort Scott, Kansas, with “narratives of personal experiences out in the open, in the wild places,” while also explaining “the techniques of mountain climbing and the compensations…derived from the hard work and the dangers encountered” (“Dr. C. J. Best to Lecture in Ju-Co Pay Assembly” 1).

Best’s “motion picture lectures” found success across a range of nontheatrical sites, occasions, and sponsors. Most often, she appeared at high school auditoriums and churches, though she also performed at universities, hotels, and all manner of public halls. (Newspapers generally mentioned that Shippam took the motion pictures during the pair’s treks, but only very rarely noted whether Shippam was present during Best’s lecture tours.) For these bookings, the BCE required at least one local sponsor, including, typically, women’s organizations, service and social clubs, and groups devoted to local boosterism or outdoor recreation. While press materials emphasized Best’s singular accomplishments as a woman and claimed that “women will be especially interested in the record of one of their sex who has done things that would give pause to most men” (“Sportswoman Will Address Ikes” 14), Best’s appeal was never limited to female audiences and her career depended on sponsors well beyond formally organized women’s groups. For example, in February 1926, in Lincoln, Nebraska, Best lectured at a downtown hotel to a joint meeting of the Izaak Walton League (devoted to fishing and preserving outdoor recreational opportunities) and the Knife and Fork Club (a social club for married couples). In the small town of Bend, Oregon, Best’s visit was jointly sponsored by the Kiwanis Club, the Lions Club, the Commercial Club, and the Women’s Civic League. Judging from the sites and sponsors of her varying lectures during the 1920s, all positioned well outside the commercial mainstream cinema, the public that welcomed Best was largely composed of well-to-do, white, and prominently-situated citizens in American towns and mid-sized cities, especially in the upper Midwest, but stretching south into Ohio and westward to California.

For these audiences, Best and Shippam fashioned a product that aimed to be inspirational (yet not overtly religious) and educational (yet not instructional) in its celebration of America’s remaining “virgin country full of adventure, romance and opportunity” (Best 6). Best translated first-hand experiences into uplifting entertainment that attested to the courage and capabilities of women, yet did not advocate for political change that addressed sex and gender inequities. As such, Best and Shippam figure in a much broader history of nontheatrical cinema, sponsored screenings, and multimedia performances. Their transportable, repeatable, and profitable lectures on “Hell Roaring Waters” and “Unblazed Trails” point to other histories—of, for example, nonfiction cinema put in the service of documenting what would become known as extreme or high-risk sports, of promoting conservation, and of encouraging audiences during the 1920s to appreciate and perhaps venture out to meet the challenges posed by what was assumed to be a still majestic natural world.

As an afterword, it is worth noting in this context that Best and Shippam’s most extraordinary adventure—described in a 1927 Sunday supplement article by M.W. Childs—did not take them into the American wilderness, but rather deep into Manchuria, China, in 1927. Venturing alone, with the aim of hunting exotic snow leopards, the two women found only danger at the hands of menacing bandits. Firing their revolvers to ward off unseen assailants, Best and Shippam managed to escape by traveling on foot and by train, posing as native men or boys, having applied “chrome yellow” paint from Shippam’s artist’s palette to “darken” their faces. Best suffered from dysentery and hid in the bottom of a boat grounded on a mudbank while Shippam nursed her back to health. The women finally escaped from China on a Japanese ship. Once in Japan, they climbed various peaks in Hokkaido, then ascended Mount Fuji (93). This spectacular “Oriental” and Orientalist adventure—which reads like the outline for a movie serial, complete with gender and racial passing—received widespread press coverage in America. While Best seems to have mentioned the China episode in her subsequent appearances, she did not make it the subject of a new lecture, perhaps because the women apparently were not able to bring back moving pictures as nonfiction evidence.

“News of the World Told in Pictures.” The Philadelphia Inquirer (29 August 1924): 15. [Features syndicated photo of Best and Shippam].

The creation of a traditional filmography is difficult given the limited information that we have on Best and Shippam, which focuses more on the lectures than the actual filmmaking process. Motion picture materials related to the lectures discussed in this profile are believed to be lost.