Texas Guinan’s lasting fame derives from her reign as New York City’s Prohibition-era “queen of the nightclubs,” who greeted patrons with the famous cry, “Hello, sucker!” This is the persona displayed in Incendiary Blonde (1945), the flashy Hollywood biopic about Guinan starring Betty Hutton, and by Guinan playing herself in a few early Talkies, including the now-lost Queen of the Night Clubs (1929). But Guinan, born in Waco, Texas, obviously the source of her nickname, first achieved national prominence in the ostensibly masculine domain of the silent film Western, where she was promoted as the “female William S. Hart.” “Texas Guinan to Typify West” promised an early ad campaign for a series of her films, and, playing a tough “gun woman” rather than a timid schoolmarm in need of rescue, Guinan tailored her defiantly unglamorous image as a rowdy cowgirl who tames men as easily as horses. Moreover, her success as a performer allowed her to assume off-screen control of her career, first as the department head of the unit producing her films at Bull’s Eye/Reelcraft in 1919, and most significantly in 1921 by forming Texas Guinan Productions, her own independent company, to make The Code of the West (1921) and Texas of the Mounted (1921), her final silent films before her successful reinvention as a night club hostess. Some evidence suggests that the company may have produced additional films. According to her biographer Louise Berliner, Guinan was an innovative and energetic producer, choosing to cast each film rather than employ a stock company, helping to inaugurate states-rights distribution of her films, and supervising the publicity campaigns (including staging live skits before screenings) for her new company. 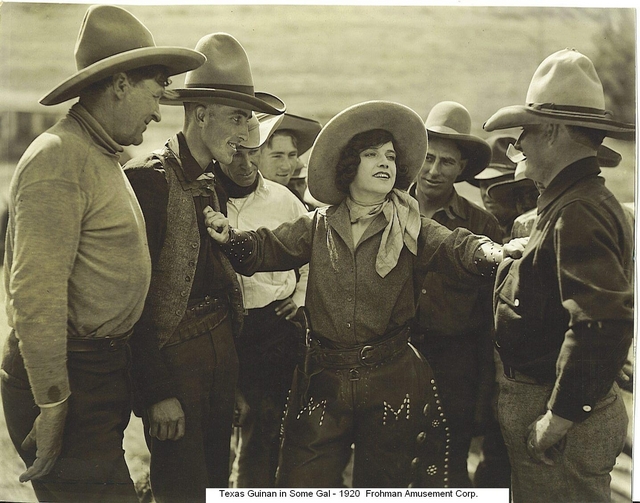 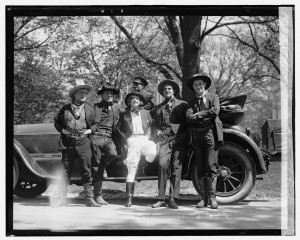 Miss Texas Guinan, 1922. Courtesy of the Library of Congress.

Although the Western is often considered the most masculine of genres, this characterization does not easily apply to the silent period, when some women played prominent roles in their production. Louise Lester starred in a dozen “Calamity Anne” films for the American Film Company between 1912 and 1914, and in 1919 Marie Walcamp played Tempest Cody in nine films in Universal’s “Spur and Saddle” series. Such popular movie cowgirls (or “cowboy girls” as the early trade press called them) had roots in pre-cinematic media, including dime novels, stage melodramas, and Wild West shows like “Buffalo Bill” Cody’s spectacle featuring sharpshooter Annie Oakley. The prolific Bertha Muzzy Bower, under the gender-obscuring pen name B.M. Bower, published best-selling Western novels between 1904 and 1914 that were often adapted into successful films. In this context, Guinan was perhaps the most significant woman in early cinema to challenge the assumption that women could only play secondary or conventionally feminine roles in the popular Western. Fond of firing guns and racing on horseback, Guinan established a tomboy presence in the Western that did not fit into the opposed roles of the refined Eastern lady or the Western dance hall prostitute that would delimit women’s roles in “mature” examples of the genre. Perhaps recognizing that she occupied an unconventional position both on screen and in the industry, in Texas of the Mounted, the first film she produced for her own company, Guinan plays male and female twins: when he is killed, she avenges his murder while wearing his clothes. 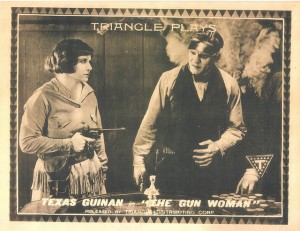 Constructing an accurate picture of Guinan’s film career, or her rumor-filled private life, for that matter, is difficult. Many of her films were shortened later by Melody Productions and re-released with soundtracks under multiple titles, and perhaps only a half-dozen survive, some as incomplete prints. Most unfortunately, all of the films she produced, varying in number from two to fourteen in different accounts, are lost, although a few of the two-reelers she supervised for Bull’s Eye/Reelcraft are available. By a conservative estimate, Texas Guinan starred in approximately 33 silent films made by a handful of production companies, including Mack Sennett’s Triangle Film Corporation (four films in 1917-1918), Frohman Amusement Corporation (thirteen two-reelers in 1919), Bull’s Eye/Reelcraft Film Company (twelve two-reelers in 1920), and Victor Kremer Productions (two features in 1921). These companies may be less familiar to film scholars than some of the notable directors who supervised Guinan: Frank Borzage directed her first major film, The Gun Woman (1918), and Francis Ford, Western film director John Ford’s older brother and mentor, directed her in I Am the Woman and The Stampede, both in 1921. 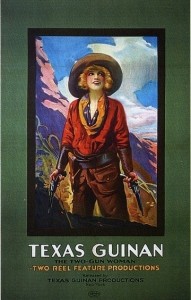 Although publicity materials attempted to glamorize Guinan, her stout body, broad face, and insistence on playing heroic leads didn’t allow her to be cast in conventionally “feminine” roles. Working almost exclusively in the genre that would eventually seem the most unwelcoming to women as performers or producers, her evident popularity and success suggest that our own understanding of the early Western genre requires revision in order to properly acknowledge her contribution, but also to begin to ponder the fantasies the boisterous movie cowgirl embodied for cinema’s early audiences.

The film The Heart of Texas is believed to be part of serial. However, little has been written about the films and few Guinan filmographies discuss the series. It is possible the series was never completed. UCLA owns a nitrate copy of episode 11 that has not been preserved at this time. The majority of Guinan’s films from the early 1920s were directed by Jay Hunt, however FIAF contends that The Wild Cat may have been directed by Therdo Joos. FIAF also lists Melody Productions as the production company for Letters of Fire. Melody was the company that re-released a number of her films, including The Boss of the Rancho. Only the re-release versions of these films exist. The extant print at The Library of Congress of The Gun Woman is 16mm and only 2 reels long. The author states that some sources list up to 12 additional titles for Texas Guinan Productions, but little clear evidence for their production exists. The author also noted that there is re-release version of The Boss of the Rancho/The Girl of the Rancho.