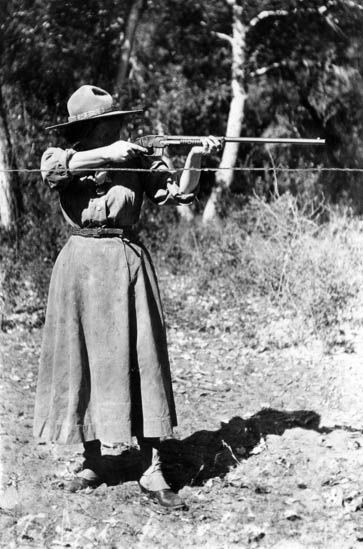 Bertha Muzzy Bower was perhaps the first female author of mass-market Western fiction. In her lifetime, Bower wrote sixty-eight Western novels under an androgynous nom de plume, a mandate made by her early publisher Street & Smith in order to conceal her gender from readers. While it is difficult to accurately assess the massive popularity of these novels, her works—particularly her Flying U novels—attracted the attention of several Hollywood producers and were regularly adapted into films. Her most popular novel, Chip, of the Flying U, seemed to have been a favorite among moviemakers, as it was adapted four times. As most scholarship on Bower focuses on her literary career, information on her work in cinema remains sketchy and indeterminable. Nonetheless, several sources tell us that Bower was attracted to cinema and particularly to the Hollywood Western. According to Orrin Engen, Bower believed that “the early cowboys of the films projected the essential vitality of life on the range” (11). Outside of the film adaptations, her ties to Hollywood seem tangential at best, though she also worked as a scenario writer and screenwriter, collaborating extensively with director Colin Campbell and cowboy actor Tom Mix. 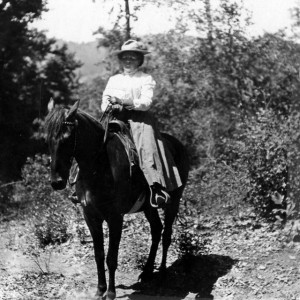 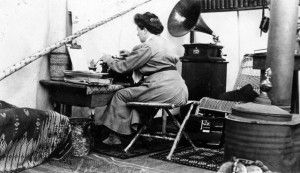 Although Bower’s professional career as a novelist technically began with the 1904 publication of “Ghost in the Red Shirt” in Lippincott’s Magazine, she only attained a truly wide-ranging readership later that year with the publication of her first Western novel, Chip, of the Flying U, which was serialized in Street & Smith’s Popular Magazine. It became a sensation with readers, generating enough interest to be reissued as a hardback in 1906 by G. W. Dillinghan. The novel, which was published under Popular Magazine’s mission to print authentic stories of Western ranch life after the massive popularity of Owen Wister’s The Virginian, centers on Chip, a tough but sensitive cowboy who works on the fictional “Flying U” ranch. Much of the novel focuses on the romantic tension between Chip and the ranch owner’s sister, Dell Whitmore, an upper-class medical student traveling to the Flying U after the completion of her degree out East. Initially, their relationship is antagonistic, as Dell takes credit for one of Chip’s landscape paintings in order to sell it; this conflict resolves itself and blossoms into romance after Dell identifies Chip as the true artist and, in a rousing adventure sequence, Chip rescues her from a runaway horse. Immensely popular, Chip spawned an entire series of novels set within the fictional Flying U universe. These novels, as Victoria Lamont attests, solidified Bower’s reputation as a renowned fiction writer: “Bower’s transition from pulp author to ‘serious’ novelist was enabled by the success of her ‘Flying U’ stories” (1993, 63). From here, Bower would write continuously for the rest of her life, averaging two or three novels a year until her death in 1940.

Chip of the Flying U was adapted for the screen four times, which, as Lamont suggests, might be the most accurate indicator scholars have of the novel’s immense popularity (1998, 164). Bower’s narrative, however, seemed to be altered more and more dramatically with each successive film. Selig produced the first adaptation of Chip in 1914, a five-reel feature starring Tom Mix in the title role. According to William Everson, Chip remains singular among the films produced from the pairing of Mix and Selig, writing that this was the only of “Mix’s Selig films [that] made a strong impression” (1992, 84).  The second adaptation, retitled The Galloping Devil (1920), was directed by Nate Watt and starred Bud Osbourne and Genevieve Berte. This version jettisons much of Bower’s narrative, promoting Chip from farmhand to ranch owner, and adding in characters such as the villainous foreman Dink and heroic cowboy Andy. With the 1926 adaptation produced by Universal, romantic melodrama faded into the background, as the film made the comedic stylings of Hoot Gibson its most salient feature. For many scholars and contemporary critics, the 1939 talkie adaptation remains the most satisfying version of this novel although the original story was significantly transformed. In addition to Chip, several other motion pictures were adapted from Bower’s novels, including The Wolverines (1921), The Taming of the West (1925), and Ridin’ Thunder (1925). However, little has been written on any of Bower’s adaptations outside of the four versions of Chip.

Aside from the occasional mention of these film adaptations, Bower’s contributions to cinema did not receive much academic attention. After the publication of Chip, Bower collaborated with director Colin Campbell, writing stories and screenplays for seven one-to-five-reel Westerns under the name Bertha Muzzy Sinclair (her second husband’s surname). As Hollywood producers and location scouts flocked to Montana in order to find the assistance of cowhands, Bower became acquainted and developed friendships with Gary Cooper and Tom Mix, and she eventually developed a professional relationship with Mix. In addition to taking on the titular role in Selig’s Chip of the Flying U, Mix starred in three other films written by Bower: When the Cook Fell Ill (1914), The Lonesome Trail (1914), and Weary Goes A’ Wooing (1915). In 1920, Bower moved to Hollywood with her third husband, tearing herself away from the untamed West she had called home all of her life. Bower continued to write for Hollywood, and would on occasion use her experiences working within the studio system as the source material for her novels, as in Jean of the Lazy A (1915), The Heritage of the Sioux (1915), The Phantom Herd (1915), and The Quirt (1920).

Lamont, Victoria. “Cattle Branding and the Traffic in Women in Early Twentieth-Century Westerns by Women.” A Journal of American Women Writers vol. 22, no. 1 (2005): 30-46.

The films North of “53,” Shotgun Jones, Big Timber, Sweethearts of the Sage, and The Raiders are all credited in AFI to Bower’s pseudonym Bertrand W. Sinclair. There is confusion regarding Sweethearts of the Sage. Though the author lists Bower as the author of The Cherry Pickers, her participation cannot be found in the standard sources. FIAF does not list an archive for the 1939 adaption of Chip, of the Flying U.