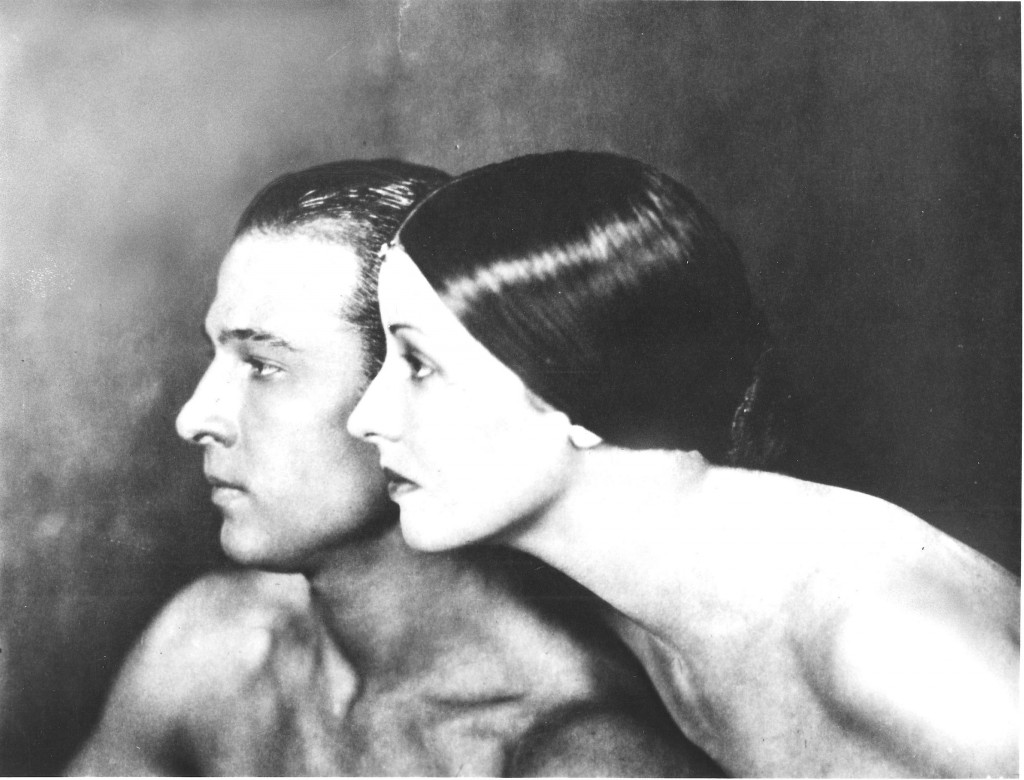 In the 1920s, Natacha Rambova created a unique look in set design and costume for some of cinema’s most imaginative films. She was a powerful influence on designers such as Gilbert Adrian, whom she hired for his first film, and Michael Morris ranks her among such innovators as Erté, Paul Iribe, and Cecil Beaton. She was the niece of interior decorator Elsie de Wolfe, with whom she lived occasionally as a girl and whose style she particularly repudiated. Born Winifred Shaughnessy, Rambova changed her name in 1914 and joined Theodore Kosloff’s ballet troupe as a principal dancer. She designed their sets and costumes until Kosloff interested Cecil B. DeMille in her work, and she created the costume and décor for the Aztec sequence in his The Woman God Forgot (1917), and then sequences in DeMille’s Why Change Your Wife (1920) and Something to Think About (1920). She also designed parts of Alla Nazimova’s Billions (1920). According to Morris, Leider, and Lambert, Kosloff stole all of her credits, which she reclaimed by showing her design sketches to Nazimova.

Shot from Camille (1921). Courtesy of the Academy of Motion Picture Arts and Sciences, Margaret Herrick Library.

This meeting between the two was the start of a great artistic relationship. Aphrodite (1921), Nazimova’s film for which Rambova designed all sets and costumes, was their second collaboration. It was never completed. Undertaken by Metro Pictures as a project to adapt a successful Broadway show, Aphrodite was terminated by the studio, which feared new censorship laws. Camille (1921), A Doll’s House (1922), and Oscar Wilde’s Salome (1923) followed, producing a signature look. Rambova created homogeneity between players and décor reminiscent of French Expressionist cinema, but with an unusual elegance. She stunningly combined the straight silhouettes of Art Deco haute couture with ancient Asian and European curves and florets, using shimmering silvers, whites, and blacks, and memorably interpreted Aubrey Beardsley’s drawings for Salome along these lines. Her work also exhibited meticulous period research subtly incorporated with modern patterns, especially obvious in the Egyptian-based Aphrodite and dominant in her later designs. Nazimova produced and starred in all four films and probably directed A Doll’s House (Slide, 129; Lambert, 251) and Salome (Lambert 256; Morris 83). Slide suggests that Nazimova “relied heavily” on Rambova’s directorial advice for Salome (Slide, 128). This avant-garde classic is known for its striking use of black and white costumes and Salome’s rubberized satin tunic (made in a tire factory), which prototyped the 1980s cling dress. Although Camille brought together the talents of Rambova, Nazimova, and writer June Mathis, it was not a financial success. Neither A Doll’s House nor Salome claimed a wide following, either, both considered by critics to be too bizarre. Nazimova Productions consequently collapsed (Lambert 261–262; Morris 93).

Rambova’s relationship with Rudolph Valentino, not with Nazimova, effectively made her reputation. In the five years she lived with him, three of which as a married couple, they made seven films together, during which, while maintaining her own career, Rambova managed Valentino’s career, often negotiating his contracts. In 1923, after the couple’s mistreatment by the studio, she helped him to sue Famous Players-Lasky Film Corporation, eventually winning both better pay as well as artistic control, which led to their making the critically acclaimed 18th century French drama, Monsieur Beaucaire (1924), A Sainted Devil (1924), and the uncompleted The Hooded Falcon project that same year. For the latter, Rambova wrote the screenplay with Mathis, and Rambova together with Gilbert Adrian may have begun costume design work in the preproduction stage, but no director was assigned and the production money was finally pulled. The press as well as the studio encouraged public ambivalence about Valentino’s new “art” roles and accused Rambova of de-masculizing him and of interfering on the set. Barsacq asserts that she was “probably the most disliked woman in Hollywood in the ’20s” (235). Leider’s research, however, suggests that much of this was slander (330). She quotes numerous contemporary defenses of her talent, including praise for her work as an uncredited assistant director and a director (298, 308–9). Both Morris and Leider suggest that Rambova was fighting sexism, but Leider further argues that Valentino’s male fans, made uneasy by his sexuality in powdered wigs, targeted Rambova instead. United Artists capitalized on these confusions, and the terms of Valentino’s 1925 studio contract, which he signed, were contingent on Rambova’s removal from his professional life. This damaged her career and contributed to their divorce, but within a year Valentino had died.

In 1925, Rambova produced both What Price Beauty? which she also starred in, scripted, and designed, but the film wasn’t released until 1928 (Slide 1996, 130). In 1925 she also produced When Love Grows Cold in which she starred, but she soon left forever the Hollywood she called “gilded hell.” At theatres she worked as an actress, playwright and continued minor designing. Furthermore, she was a journalist and scholar. As the latter, she lectured on symbolism and on the spiritual teachings of G. I. Gurdieff and Madame Blavatsky as well as worked on Egyptian research for the prestigious Bollingen Series. Rambova lived a comfortable life abroad. Lambert states that Rambova died “mad” in 1965, in New York City (394), but Morris (255–256) and Leider (412) affirm that Rambova, diagnosed with “paranoid psychosis arising from malnutrition,” was taken by relatives to Pasadena, where she died in 1966. Despite her numerous accomplishments, her death certificate states her occupation as “housewife.”

Rambova’s originality and versatility in cinema should have afforded her an important place in film history, but her career profile is plagued with omissions, beginning with Kosloff’s theft. In major film design histories, Barsacq mentions her briefly and Sennett omits her. This oversight may have to do with the fact that Rambova’s work was mostly uncredited, unfinished, or lost. In Forbidden Fruit (1921) and Fool’s Paradise (1921), her credit, for a single sequence in each, went to chief costume designer Clare West. Rambova removed her design credit from some Valentino films to distance herself from him, and she was never credited as assistant director on Monsieur Beaucaire according to Leider (298). Some of Rambova’s later projects never materialized. In addition to Aphrodite, The Hooded Falcon, starring Valentino, with a script by Mathis and Rambova, and costumes by Rambova and Adrian, was never completed. Only fragments remain of When Love Grows Cold with Rambova’s costumes for Valentino. A piece of The Young Rajah (1922), also starring Valentino, with Rambova’s costumes and sets and a Mathis script, exists along with an extant trailer. Tragically, Billions and A Doll’s House are lost and only stills remain. A Sainted Devil with Rambova’s production supervision and costumes by her, Adrian, and Norman Norell, and What Price Beauty? (1928) are also gone. But Beyond the Rocks (1922), with Rambova’s costumes for Valentino, long lost, was found in the Nederlands Filmmuseum in 2004 and was restored in 2005.

Rambova is thought to have appeared as an extra in 1921 version of The Sheik as well as Cobra. As mentioned in the article, Rambova’s credits are somewhat hard to verify. While she was involved with Valentino, she worked as his sole costume designer while other designers (such as Clare West or Lucile/Lucy Duff-Gordon) would dress the rest of the cast. The same is true of her relationship with Kosloff. Rambova was also deeply involved in a number of Valentino and Nazimova films and may have worked as an assistant director or codirector, though it can’t be confirmed by modern sources. The surviving print of The Young Rajah is incomplete. The Hooded Falcon (1924) was cowritten by June Mathis and Natacha Rambova, and would have stared Valentino. She would have also designed the costumes. The film went over budget and was unfinished.