On March 14, 1907, Mabel Louise Clark married Norman Hughes Chaplin Whitton at St. Mary’s Church, Walton-on-Thames, England. She was twenty-one while he was twenty-four. Their professions were the same: they both called themselves “cinematographers,” which in her case may have meant any and all of the jobs listed in occupations above. 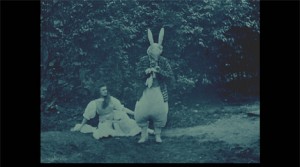 May Clark and Margaret Hepworth as White Rabbit in Alice in Wonderland (1903). Courtesy of the British Film Institute. 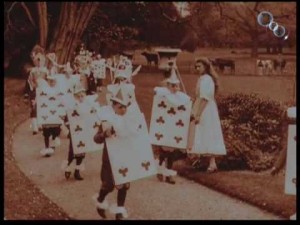 May Clark in Alice in Wonderland (1903). Courtesy of the British Film Institute. 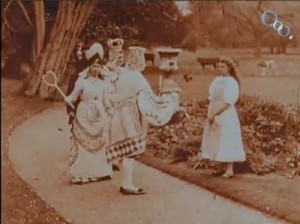 May Clark as Alice and Margaret Hepworth as the Queen in Alice in Wonderland (1903). Courtesy of the British Film Institute. 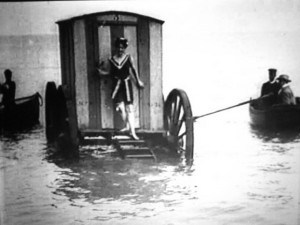 May Clark in A Seaside Girl (1907). Courtesy of the British Film Institute. 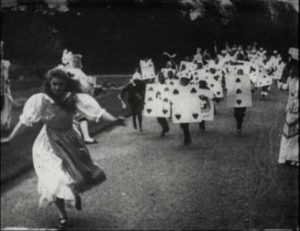 May Clark in Alice in Wonderland (1903). Courtesy of the British Film Institute.

Mabel Clark was born in June 1885 at Sunbury in Middlesex. Her father was a boatman based at Walton, and along with her father and her brother, Reggie, she started to work for Cecil Hepworth in 1898. She was employed doing small acting parts in the short films that Hepworth was beginning to produce. In 1900, at the age of fifteen, she joined him full time and continued in his employment until the birth of her first child in 1908.

In an interview she gave to the television program Yesterday’s Witness in 1968, she went into some detail about the work she did at Hepworth Studios. Most of the interview, which was filmed in conversation with the Clarendon Company actress Dorothy Bellew was left out of the completed program. However, the transcript of the interview survives, and we can read her account of her experiences in the early years of film production. To summarize this interview, in it Clark says that she was involved in many aspects of the production of Hepworth’s films—from special effects and set decoration to costume design and carpentry. She told Yesterday’s Witness that her first on-screen role in 1900 coincided with managing the pyrotechnics for The Burning Stable (1900). She had to orchestrate the burning of the barn and the saving of a horse. “None of it was prepared beforehand, or rehearsed or anything like that,” she said. “We just had to do the best we could and Cecil Hepworth kept turning the handle all the time. He got quite a good film, but it was only about 100 ft. long.”

She was paid 7s/6d a week by the company to do “odd jobs,” she says, and her hours were supposed to be from ten in the morning until five in the evening, but she often worked much longer. The mornings were dedicated to making the set and props as well as filming. Margaret Hepworth assisted her in sewing costumes. After lunch Clark developed and printed the film shot in the morning. Clark recalls that there was a lot of trial and error during this process. When finished, she would run the film through a projector to assess the print, and she often stayed late in the evening to correct a mishap. When she married Whitton in 1907, it was expected that she would retire, but she continued to work for the company a little while longer.

The period following Clark’s departure from Hepworth is, however, a blank apart from two films in which she acted for British and Colonial: The Winsome Widow (1912) and The Adventures of Dick Turpin-Two Hundred Guineas Reward, Wanted Dead or Alive (1912). However, Liam O’Leary, the Irish film historian, interviewed Vernon Whitton, her son, and although O’Leary’s summary of the interviews mainly deal with Norman Whitton, May is mentioned.

After their marriage, May and Norman left Hepworth and set up the Stamford Hill Film Cleaning Company, where they repaired perforations and tears and cleaned films. Later they joined forces with May’s brother, Reggie Clark, to form the County Film Company. In 1912, they moved to Dublin, and Norman Whitton established himself as a film producer, film renter, and cinema equipment supplier. Clark returned to London every couple of months to buy film programs.

In 1913, Norman set up the General Film Agency, which in 1914 became the General Film Supply Company with offices in Dublin. He produced “Irish events” and Pathé Gazette Specials of “The Troubles.” He directed a film In the Days of St. Patrick (1920) in which he and May were involved in every aspect of production. May ran the business for seven months while Norman went to the United States; however, the business failed, and by March 1921 they had sold it and returned to England. Next, Norman set up Vanity Fair Pictures with May’s brother, Reggie, now Reggie Strange, who had a film printing business. May Clark was the head business woman for both of these concerns. Around this period, the marriage between May and Norman ended, and very little is known about her subsequent activities. She must have remarried at some time because she was known as May French when she died on March 17, 1971, aged eighty-six.

1. May Clark as Actress and Possible Costume Seamstress and Set Decorator

1. May Clark as Actress and Possible Costume Seamstress and Set Decorator

2. May Clark as Actress

3. May Clark as Co-Producer

In addition to appearing in Cecil Hepworth’s films, May Clark contributed to the production of many others. She is uncredited for her work, so we cannot know the exact titles for which she created sets and costumes.