Margaret Hope McGuffie was born in 1874 at Charlton in Lancashire, England. By 1900, the family had moved to Chapel-En-Le Frith in Derbyshire, approximately twenty miles from Manchester. One of her brothers, John, who worked as a games master on the steamship The Argonaut had met the filmmaker Cecil Hepworth on board on his way to Algiers to film a solar eclipse. The two men became friends, and when they returned to Britain, Cecil was invited to meet the McGuffie family, who lived not far away from where Cecil was filming for the showman A.D. Thomas. Cecil was advised to wear evening dress for dinner, which was the practice of the McGuffie family. This may explain why in Rescued by Rover (1905), Cecil is seen wearing top-hat and tails. 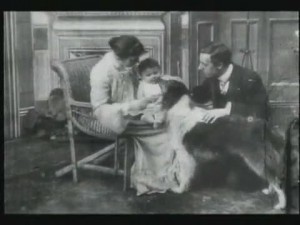 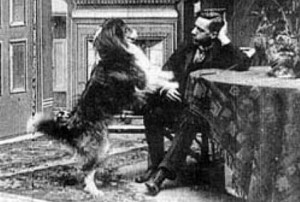 Cecil Hepworth, Barbara Hepworth, and Blair in Rescued by Rover  (1905), Courtesy of the British Film Institute. 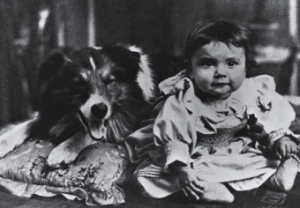 Barbara Hepworth and Blair in Rescued by Rover (1905). Courtesy of the British Film Institute. 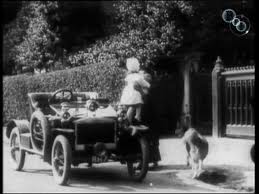 Cecil Hepworth, Barbara Hepworth, and Blair in The Dog Outwits the Kidnapper (1908). Courtesy of the British Film Institute.

Cecil and Margaret were married at Buxton, Derbyshire, on February 11, 1902. Cecil later recalled in his memoirs Came the Dawn: “I had been married about a year and my wife, broken in to film work, played the part of “The White Rabbit” in Alice in Wonderland” (63). He recalled that the film Rescued by Rover (1905) was a family affair. “My wife wrote the story; my baby, eight months old, was the heroine; my Dog, the hero; my wife, the bereaved mother and myself, the harassed father” (67). The film was shot three times, the second and third version approximately five months after the first version. According to May Clark, who worked for Cecil between 1898 and 1908: “For Rescued by Rover Hepworth used up three films. We filmed once. He wore that copy out, so we filmed it again and took two of everything when we were filming it, so that we had two separate copies, and that film built his studios. All his expenses for twelve months were paid out of that film.”

Cecil also recounted that Margaret had a considerable influence on the films he was making (49). This was corroborated by Clark. In the transcript for the 1968 interview she gave to the television program Yesterday’s Witness, she recalled that she often heard Cecil and Margaret arguing in the evenings about what they should film the following day.

Margaret had three children: Elizabeth, known as Barbara, born in December 1904; Blanche Margaret, known as Margaret, born in January 1907; and Thomas Andrew Cradock, born in November 1910. Margaret cast her daughter Barbara as the central character of Rescued by Rover and featured her in an early health education film entitled Baby’s Toilet (1905), in which Margaret demonstrates how to bathe and dress a baby. Barbara is also featured in The Dog Outwits the Kidnapper (1908), in which Margaret again played the mother and their dog Blair, the rescuer, while Cecil played the kidnapper.

It is difficult to quantify what role, if any, Margaret had in the family’s filmmaking business after 1908. In future years, Cecil tried to expand production by employing more outside film producers. Margaret died on October 9, 1917, following a three-month illness from breast cancer.

1. Margaret Hepworth as Screenwriter and Actress