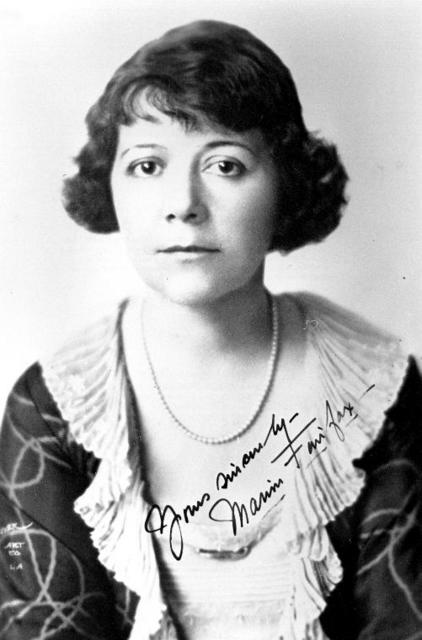 Between 1904 and 1915, Marion Fairfax wrote several successful Broadway plays before turning to screenwriting. Over the next eleven years, she achieved even greater success in her new field. In 1921, she formed her own production company that produced The Lying Truth (1922), which Fairfax wrote and directed. The most enduring film with which she was associated was The Lost World (1925), a science fiction picture about an isolated land of dinosaurs that featured tremendous special effects. A handwritten note attached to a First National Pictures legal department memo dated December 6, 1923, states: “Fairfax is always a winner—Don’t ever let her get away. Tom [unidentified] knows she is both restless and damn independent.” Three years later, however, Fairfax received her final credit for The Blonde Saint (1926) and then disappeared from filmmaking. She was married to actor Tully Marshall, who died in 1943, for forty-three years.

Like many women filmmakers of the silent era, Fairfax began her career as a stage actress. By 1901, she was appearing on Broadway. Shortly thereafter, her own plays began appearing. In 1915, Fairfax turned to screenwriting at the suggestion of William deMille, brother of Cecil B. DeMille. Over the next few years, she wrote several films directed by deMille. Another frequent artistic collaborator was director-producer Marshall Nielan, with whom Fairfax shared a long friendship dating back to her earliest years on Broadway. Together, they produced several films covering a large number of genres from 1920 to 1925. Perhaps their biggest hit was Dinty (1920) a comic melodrama starring Colleen Moore and child star Wesley Barry. Their other films included The River’s End (1920), a Royal Canadian Mounted Police adventure; Don’t Ever Marry (1920), a marriage comedy; Bob Hampton of Placer (1921), an epic Western; Fools First (1922), about a reformed gangster; and The Lotus Eater (1921), an island romance starring John Barrymore. They also created an unusual science fiction comedy drama, Go and Get It (1920), about a murderer’s brain getting transplanted into a chimpanzee. 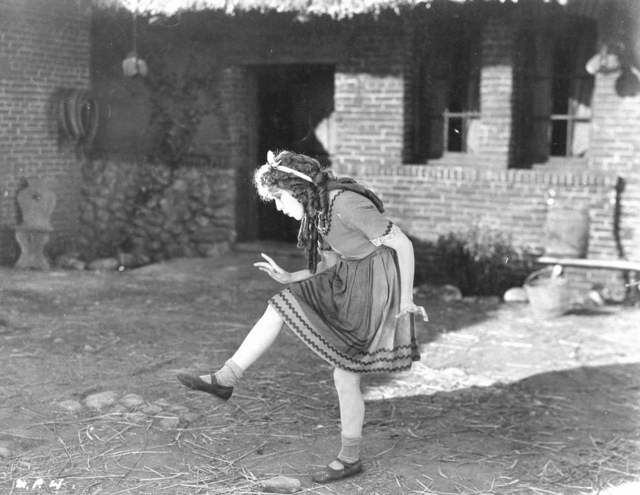 Mary Pickford, Through the Back Door (1921), written by Marion Fairfax. Private Collection.

Other directorial partners included Maurice Tourneur, with whom Fairfax created Torment (1924), a mystery; Clothes Make the Pirate (1925), a comedy with Leon Errol and Dorothy Gish; and Old Loves and New (1926), a romance set in Algeria. Other stars Fairfax wrote for included Mary Pickford (Through the Back Door, 1921) and Norma Talmadge, for whom she wrote The Eternal Flame (1922), adapted from Balzac’s La Duchesse de Langeais. Male stars for whom she created scripts included Sessue Hayakawa. These works included Hashimura Togo (1917) and The Honor of His House (1918), which considered the problems of assimilation in ways comic and tragic towards the Japanese; The Secret Game (1917), a spy film in which Hayakawa foils a German threat against US transport ships; and The White Man’s Law (1918), a drama set in Sierra Leone about a corrupt English businessman who impregnates an African woman.

In 1919, Fairfax wrote two comedies for actor Wally Reid, The Roaring Road and The Valley of the Giants, both directed by James Cruze. Fairfax’s familiarity with Reid, who died of morphine addiction in January 1923, may have influenced the one project she completed as writer and director for her own production company, Marion Fairfax Productions. That film, The Lying Truth (1922), now lost, involved an original story set in Ireland in which a drug pusher played by Noah Beery is responsible for an innocent man accused of murder nearly getting lynched. Unfortunately, as Karen Ward Mahar points out, social problem films had fallen out of favor in the early 1920s (2006, 7). Audiences were far more interested in the sexual comedies of Cecil B. DeMille than in moralizing tales. Today, Fairfax’s achievements in this film are impossible to determine. Her entire effort may have been hampered by health problems, or the opposite may also be true. The strain of operating her own company, writing, and directing while also working on several other productions throughout 1922 may have taken a toll on her health. In any case, she was unable to work in 1923. 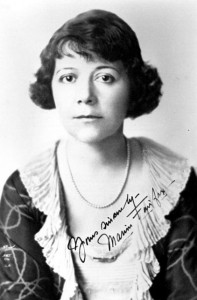 In 1926, Photoplay writer Ivan St. Johns stated: “Probably you didn’t know that Marion Fairfax’s opinion on a picture is considered the most valuable in Hollywood” (127). Strangely, in this same year Fairfax permanently retired from the motion picture business. Documents on file in the Academy of Motion Pictures Arts and Sciences library indicate that Photoplay’s statement was not simply fan magazine hyperbole. This evidence indicates that Marion Fairfax was certainly indispensable to the last company for which she worked. In 1924, Fairfax had signed a contract to work with First National Pictures, which would later become Warner Brothers Pictures. There, she became associated with the production unit under Earl J. Hudson, who worked her hard. A memo from Hudson asks if, in addition to all her other worries, she will check the daily rushes for Sundown (1924) as rapidly as possible to see if the acting is good and if they’re capturing the theme. A letter from Fairfax to Hudson the next month provides her positive evaluation for the script of The Woman on the Jury (1924). Fairfax was apparently still struggling with health problems, as a September letter addressed to her from First National production manager Richard Rowland in New York expresses regret that her illness has made her unable to come East. But he hopes she can work anyway “with whatever units may be working on the coast.” The next month, Rowland telegrammed he was glad Fairfax would be coming East to handle the editing, titling, and general editorial direction of The Lost World, for which she was also writing the script.

At the start of 1925, Hudson sent a telegram to Fairfax praising her contributions to So Big (1924), the adaptation of an Edna Ferber novel, which again starred Colleen Moore. That Fairfax’s health was still an issue is indicated by Hudson giving her time off until March 1. But the studio’s reliance on her may have overridden this offer. Another possibility is that Fairfax may have had larger goals that she wished to keep working towards. In any case, a February 2 telegram from Hudson indicates he is glad she is coming to New York to help relieve the pressure of a very heavy production schedule there and that he will begin discussing her own unit with her. 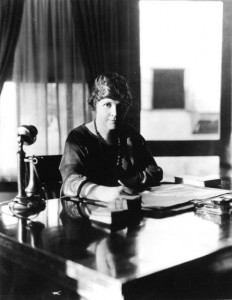 Marion Fairfax at desk. Courtesy of the British Film Institute.

Throughout February, Hudson sent several undated “Radio Messages” from on location in Texas seeking Fairfax’s assurances about a variety of productions at various stages. On Sundown, he wrote, “I feel keenly that we will have a production of which we both may be mighty proud as one of the biggest if not the biggest thing with which [we] have ever been identified.” In relation to another script, Hudson wrote, “I have absolute and implicit confidence in you and your understanding of the degree of perfection entertainment value and naturalness I want in Flapper For Sale.” Finally, on The Woman on the Jury, being directed by Harry Hoyt (who would also direct The Lost World), Hudson stated, “If Miss Fairfax feels exterior masters [of the] home [are] necessary for Jury, instruct Hoyt [to] shoot it.” Similarly, Hudson also asked Fairfax to keep an eye on director John Dillon and the making of If I Marry Again (1925). Hudson liked Dillon, but worried that “his enthusiasm may carry him off on a piece of business that particularly appeals to him.”

Despite all these requests and the fact that Fairfax was struggling with health problems, Hudson playfully threatens her in the same message by writing, “Under no circumstances forget the absolute necessity to me you are and INCIDENTALLY AND OTHER WISE I WON’T LET YOU FINISH Lost World script.” The joke, in other words, is that while she needs to keep busy with five productions at once, she should not work too hard and get sick. One assumes that he is aware that the Lost World script is one of her own priorities. Hudson’s comments indicate that her opinions may have been considered more important than the official director’s on several other films. Fairfax, therefore, most likely shaped a good deal more of what appeared in silent films than anyone has before realized. Perhaps this heavy amount of work combined with her health problems contributed to Fairfax’s quiet retirement in 1926.

Careful study of Fairfax’s work might also reveal her as a progressive social thinker who put many positive ideas onto the silent screen. At a time of rampant Orientalism and warnings about “the Yellow Peril,” Fairfax’s scripts for Hayakawa continuously presented him as a hero. In The Lying Truth, she offered a plea for understanding the drug addict and a simultaneous warning against mob justice. Another fascinating Fairfax script was for The Blacklist, directed by William deMille in 1916, the first film to be shown at Cooper Union in New York. The film sided with a radical miners union whose members were being blacklisted so that they would be unable to find work after leaving a job. Blanche Sweet played Vera Maroff, the daughter of union leader Sergus Maroff. A strike turns violent, and the mine president’s son, Warren Harcourt, is unable to stop his guards from shooting the miners. Although Vera loves Warren, she accepts her assignment when she is selected to assassinate him. She fails at first, but then returns for a second attempt. This time, she wounds him in the shoulder and then turns the gun on herself. But Warren stops her and says, “Tear up the Black-List. We’re going to run things differently—you and I.” Thus, The Blacklist bent gender roles by having the heroine take up arms to end labor injustice. Another film gender bender was The Widow’s Might (1918) starring Julian Eltinge, the leading female impersonator of the time. In it, Eltinge has to use his cross-dressing skills to help his neighbor stop a land grabber’s attempt to claim her property.

Fairfax’s personal struggles, ideals, and accomplishments deserve greater study. Specifically, careful study of her scripts in relation to the original sources could provide some understanding of her goals and values. However, a greater wealth of production documents and secondary sources related to the films she worked on is also needed to determine more about the nature of her collaboration and influence. Fairfax was born Marion Josephine Neiswanger in Richmond, Virginia, and died in Los Angeles.

It is possible that Marion Fairfax worked on The Eternal Flame (1922), but this is unconfirmed.