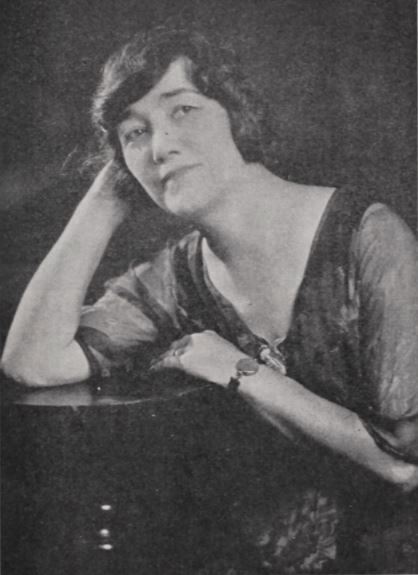 Born Lulu Case in rural South Dakota, Lillian Case Russell worked as a schoolteacher before beginning her writing career in New York shortly after the turn of the century. Living in Brooklyn with her husband John L. Russell (who would later become known in Western films as John Lowell) and their two children, Russell wrote stories and poetry for newspapers and magazines. Covering topics ranging from Reno divorces to men’s fashions to women’s suffrage, Russell’s early writing demonstrated the wit, flair for the dramatic, and social awareness that would inform many of her later screenplays. This is evident in the 1912 New York Times piece “You Mustn’t Ask to Vote,” in which she offers a biting criticism of anti-suffrage attitudes: “You may toil behind our counters, / In our factories you may slave, / You are welcome in the sweatshop / From the cradle to the grave; / If you err, altho’ a woman, / You may dangle by the throat, / But our chivalry is outraged / If you soil your hands to vote” (10).

After several years writing for newspapers and magazines, Russell began her screenwriting career in the mid-1910s. She wrote films in a wide range of genres and featuring a variety of personalities, from former Ziegfeld girl Dorothy Mackaill (The Broken Violin, 1923) to baseball star Ty Cobb (Somewhere in Georgia, 1916). Her comedies for Mr. and Mrs. Sidney Drew include an adaptation of the play “Cousin Kate” directed by Mrs. Sidney Drew (Lucille McVey) in 1921. Russell also wrote several feature melodramas for Olga Petrova between 1916 and 1918 in which Petrova played daring, adventurous women who moved freely in masculine spaces. In The Black Butterfly (1916), Petrova stars as a nurse who undergoes a blood transfusion on the front lines in France to save her beloved; in The Soul of a Magdalene (1917), Petrova portrays an expert in foreign languages; and in The Light Within (1918) she plays a doctor, but, as Variety pointed out, “Not an ordinary two-dollar-a-visit physician, but a doctor of bacteriology who discovers a cure for meningitis, and later for the deadly anthrax” (52). 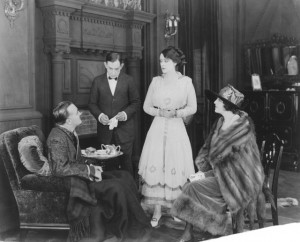 Olga Petrova in The Light Within (1918), written by Lillian Case Russell. Private Collection.

By the late-1910s Russell was the chief screenwriter for Blazed Trail Productions, an independent company based in Upstate New York and specializing in Westerns. The company’s primary star was John Lowell, and Russell’s daughter Evangeline Russell was a frequent costar, often playing the romantic lead opposite her father. In 1920, Moving Picture World reported that Lillian Case Russell would be directing films for Blazed Trail Productions after the company’s previous director, Joseph J. Barry, left to form his own production company. These films, featuring stories about the Northwest Mounted Police, were described by the Moving Picture World as “full of action,” and said to have “met with a splendid reception” (1058).

When Blazed Trail Productions went bankrupt in 1925, the Russells continued making Westerns with their own company, Lowell Film Productions. By 1930, the Russells were living in Los Angeles, and the census records from that year still listed Lillian as a “playwriter” for motion pictures. While Russell continued to write films after the coming of sound, her husband John had apparently left acting by 1930 and found work as a building contractor. Russell’s son, John L. Russell, Jr., had begun work as an assistant cameraman by this time, and would later receive an Academy Award nomination for his work as director of photography on Alfred Hitchcock’s Psycho (1960).

Early in her career Russell was interested in fostering young screenwriters. She wrote two screenwriting guides, “Here Lies” in 1914 and The Photo-Playwrights Primer the following year. “Here Lies” lists numerous topics, themes, and plot devices that screenwriters should avoid at all costs. In one instance, she implores beginning scenarists: “If you must lose, or must have a child stolen, don’t identify it by means of a locket, a birthmark, a ring or necklace. Try another plot” (6). With humor, she advises new writers not to “Show the poor lover or unappreciated wife writing a photoplay and receiving a $500 prize. Too improbable” (11). Both of her books were published by the Photoplay Clearinghouse, an organization that served as a brokerage between screenwriters and studios, ensuring that deserving screenplays found their way to the appropriate studio personnel, and offering suggestions for improvement to novice writers. Lillian Case Russell was said to have “handled a majority of the 12,000 or more scripts” that had been sent to the Photoplay Clearinghouse (4). Although this book was published shortly after Russell began her screenwriting career, she could already be described in its pages as a “well-known photoplaywright” and a “successful scenario writer,” a testament to her talent and popularity as a writer (31).

1. Lillian Case Russell as Screenwriter and/or Storywriter or Adaptation

The first episode of The Blazed Trail/When Big Dan Rides exists at Library of Congress, however, another reel titled The Heart of Big Dan also exists there and may be another episode of the serial. Neither film has screenwriting credits listed in FIAF, AFI or in Paul Spehr's book. Russell is thought to have produced additional films than what is listed in the above filmography, however, those titles cannot be confirmed.