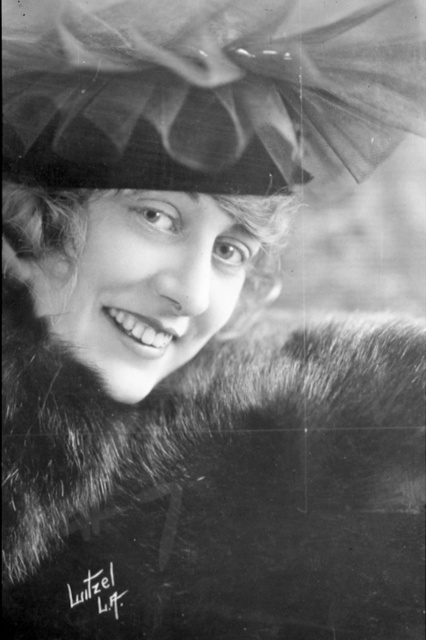 Known to her fans as a daring jewel thief, an athletic reporter with a nose for news, and a circus tamer of rather ferocious cats, Grace Cunard (Harriet Milfred Jeffries) performed in over one hundred silent-era films, including five of Universal Studio’s most popular adventure serials in the 1910s. She was also known as “The Master Pen,” a thinly veiled pseudonym that graced announcements and title cards for her first serial story and star vehicle, Lucille Love, The Girl of Mystery (1914). Although the exact number of screenplays, stories, and scenarios for which she received credit is unknown, the publicity surrounding her seven-year career at Universal stressed her capacity to “write everything” in which she appeared, and the number likely tallies around fifty films, according to a 1915 biography in Feature Movie Magazine, in what could be seen as a publicity inflation to impress Cunard’s fans (44). Other sources, however, offer alternative calculations. The same year, for instance, reporter Hugh Weir touted Cunard as a “twenty-two year old girl” who is also the “Author of Over Four Hundred Scenarios!” (26).

Grace Cunard in a car. Courtesy of the BFI National Archive.

Cunard’s potent celebrity status in the 1910s cannot be considered outside of her partnership with Francis Ford (born Francis Feeney, the elder brother of Western director John Ford), whom she met in 1912. Cunard’s acting and writing talents, as well as her unerring taste for the popular, merged well with Ford’s directorial experience, and in 1913 the team joined Universal Pictures together. Unlike other celebrity couples at the time who were married—Lucille McVey (Mrs. Sidney Drew) and Sidney Drew, Lois Weber and Phillips Smalley, and Ida May Park and Joseph de Grasse—Cunard and Ford never married, nor did publicity hint at a budding romance between the two. At times, Ford was cast in the role of the young woman’s mentor and enthusiast, especially in stories that circulated regarding the initial formation of their working partnership. As Cunard recalled about their start in Photoplay in 1914: “Mr. Ford seemed to grasp intuitively the fact that I had something in me and so encouraged me that I played his leads and set to work to both assist him and write the Photoplays we used” (Shaw 38). But by 1915 the story of the Cunard-Ford team was most often relayed as a tale of two energetic artists mutually engaged in a collaborative endeavor. Their collaboration occasionally extended to directorial duties as well, especially during periods of acutely hectic production schedules. As Moving Picture Weekly describes their method of working: “When Mr. Ford is in a scene Miss Cunard directs, and when she appears without her virile co-star, Mr. Ford takes charge” (Weir 27). Of the team’s relatively few extant films, Cunard received codirectorial credit for Unmasked (1917), as well as for four episodes of the serial chapter-play The Purple Mask (1917).

Lauded as making the most “popular” of films, Cunard’s stories tend toward the fantastic, and her female characters tend toward the fantastically unconventional. In 1914 Cunard created “My Lady Raffles,” a jewel thief with a delightfully reckless charm who first appeared in short films like The Mysterious Leopard Lady (1914) and The Mystery of the White Car (1914). Cunard costarred in the Raffles films with Ford, and then joined Ford in directing and starring in The Twins’ Double series (1914), described by Photoplay in 1914 as “remarkable photoplay successes” in which “Miss Cunard not only takes the part of twin sisters, but of an adventuress who impersonates them as well, and she appears in several scenes as all three at once” (Shaw 38). The disarming nature of Cunard’s role as “at once” twin sisters as well as their impersonation reveals her fascination with stories of split, hypnotized, or double personalities. The Adventures of Peg o’ the Ring (1916), for instance, Cunard’s fourth serial for Universal, tells the story of a young woman who is subject to mad impulses at intervals and begins to scratch and tear at everything in sight. The opening episode explains that Peg’s psychical distress was inherited from her mother who was infected while she was pregnant.

It is possible to see Cunard’s playful rewriting of her favorite roles, and her recurrent self-referentiality, as another form of doubling. In 1916 the elusive Lady Raffles reappeared in a film conspicuously titled Lady Raffles Returns (1916), while a female heiress in Paris with a similar knack for thievery and a heart of gold headed up the cast of The Purple Mask. It is interesting to consider these character traits in the light of Cunard’s own written treatment for the team’s second serial, The Broken Coin (1915), as quoted by Robert Birchard:

Kitty Gray, an American newspaper woman and star reporter on a popular newspaper, finds, in an old curiosity shop, half of a broken coin. On this half of the coin is inscribed several words in Latin, which, when translated, read as follows: Underneath/flagstone f/north corner/torture cham/be found/treasures/valuables/the kingd/Gretzhoffen/Mi. Her curiosity aroused by the word ‘Gretzhoffen,’ Kitty goes home and looks up an old article of hers written sometime ago regarding the kingdom of Gretzhoffen and its threatened bankruptcy. Thinking she has material for a good story, she sees the editor of the paper and wagers one year’s salary with him: if she does not come back with a good story regarding the hidden treasures of the Kingdom of Gretzhoffen, he can donate her salary to charity… (80–81).

It is hardly coincidental that Kitty Gray exhibits many of the off-screen talents of Cunard herself, who was known at the time as a “star” writer with an eye for a “good story.” Moreover, whereas Kitty remembers “an old article of hers…regarding the kingdom of Gretzhoffen,” Cunard’s audience would have remembered a short film she wrote, released just six months earlier, in which she played both the pseudonymous title role of The Madcap Queen of Gredshoffen as well as a girl who “looked like” the queen.

The intrepid behavior of Cunard’s zany female characters made her a favorite among audiences at the time, whose numbers reportedly stretched across Australia, Czechoslovakia, Mexico, Japan, and India, where Moving Picture Weekly reported in 1916 that the Ford-Cunard team in The Broken Coin was enjoying huge popularity (31). The stunt work demanded by the scenarios Cunard wrote took its toll, and the numerous physical injuries that she sustained on set required several production breaks during the late 1910s. Meanwhile, Moving Picture Weekly would circulate upbeat Universal studio publicity like the story that “rope climbing keeps her fit” (31). Around this time, Universal head Carl Laemmle reportedly found the Ford-Cunard team increasingly difficult to work with, and in 1919 Cunard found herself paired with muscleman Elmo Lincoln in a jungle-adventure serial, Elmo, the Mighty (1919). Although Cunard and Ford united on several more projects in the 1920s, their stardom faded quickly. Ford kept busy in the ensuing three decades, appearing as secondary characters in a variety of films ranging from Charley Chan at the Circus (1936) to The Quiet Man (1952). Although Cunard played bit parts throughout the 1930s and early 1940s, including her appearance as one of the villagers in Bride of Frankenstein (1935), she did not receive screen credit. The industry’s transition to synchronized sound and a new generation of female celebrities “crowded” her “out of stardom,” as she put it for readers of the New Movie Magazine in 1932. Even so she confessed, “[s]ome weeks the postman brings me a thousand inquiries from the fans who remember Grace Cunard and her hair-raising adventures” (39). Cunard died at the Motion Picture Country Home on January 19, 1967.

1. Grace Cunard as Co-Director/Director and Actress:

4. Grace Cunard as Screenwriter and Actress

3. Grace Cunard as Screenwriter and Actress

5. Grace Cunard as Director and Actress

Grace Cunard is thought to have written, directed, produced, and/or starred in over 500 films. While every attempt has been made to write a complete filmography, it is clear that the titles of many of her films have been lost. As is mentioned in the article, the Ford/Cunard partnership was usually divided, with Ford taking the directing credit and Cunard taking the writing credit. It is clear that she also codirected many of the films, though that is not reflected in her filmography. Cunard is also thought to have written, directed, and starred in the early 1920s shorts Man Hater, Gasoline Buckaroo, and Her Western Adventure although this too cannot be confirmed in AFI or Braff. The Favorite Son is incomplete. The Purple Mask, a serial she wrote, codirected, and acted in, is an interesting case. Episodes 2, 5, 11, 13, and 16 are extant, but incomplete; episodes 1, 3, 6, 9, 20, and 15 are lost. Lucille Love is another research challenge: chapter 2 is extant, but incomplete; chapters 3, 6, 8, 10, 12, 13, and 14 are extant, and episodes 1, 4, 5, 7, 9, 11, and 15 are lost.