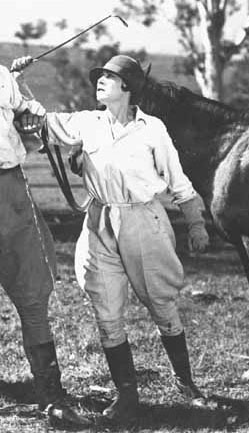 Perhaps due to her later fame as the newspaper columnist and controversial radio personality known as “Andrea,” the early film career of Dorothy Gordon has been largely overlooked. Certainly her significant celebrity in Australia in the 1960s overshadowed her comparatively lesser achievements as a silent cinema extra, actor, screenwriter, and art director. The recognition of her contribution to the Australian film industry is further diminished by the loss of her major work as star of Raymond Longford’s Hills of Hate (1926). In addition, her reputation as an entertaining raconteur fond of telling tall stories, especially about herself, leaves much room for doubt about the recorded detail of her early career in both Hollywood and Australian silent films. 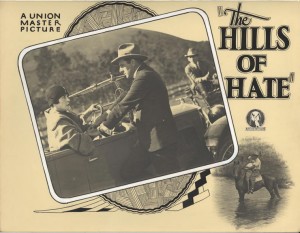 Lobby card, The Hills of Hate (1926). Courtesy of the National Film and Sound Archive of Australia.

Having developed a taste for appearing on stage, principally as a chorus girl in the 1912 Melbourne production of “Girl in a Train,” Gordon left Australia for the United States in 1915. She arrived in Hollywood brandishing several letters of introduction including one that brought her to the attention of a second cousin working for Jesse Lasky. To supplement a small stipend provided by her father, Gordon took a job as dressmaker in the costume department and developed a reputation for stunt work. At other times she also worked as a scenario reader, writing summaries for each script. In 1916, she was put in stock at Famous Players-Lasky Corporation, later Paramount Pictures, appearing as an extra in uncounted films.

Most knowledge of this period of Gordon’s career comes from her own writings, especially an article for the Australian press published in 1927 and her autobiography Darlings, I’ve Had a Ball! published in 1975. Conjuring the relevant details from Gordon’s entangled account of her various roles in Hollywood is not simple, and further archival and textual research is warranted. In her autobiography Gordon claims to have appeared in at least two Valentino films, The Sheik (1921) as the robber chief’s wife and Blood and Sand (1922) as a Spanish lady. Apparently her relationship to Valentino was so close that she was named as a character witness in his divorce proceedings. She says that she later worked with Jean de Limur on an unproduced screenplay for Valentino and claims to have worked as well with W. C. Fields and Houdini. Gordon made other uncredited appearances in Unseen Forces (1920) and A Wise Fool (1921). Additionally, her work as a production assistant on Cecil B. DeMille’s Ten Commandments (1923) went uncredited. 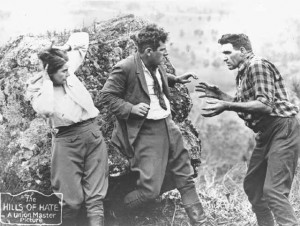 Dorothy Gordon, Gordon Collingridge and Bill Watson, The Hills of Hate (1926). Courtesy of the National Film and Sound Archive of Australia.

In her memoirs, Gordon makes further claims about her involvement in two other significant films going into some detail describing her preparation for her role as a role as a prostitute in The Sheik (1921) and later as a grandmother in The Cheat (67-68, 90-91). The latter opportunity is portrayed as if it occurred after her marriage to George Jenner in 1922 which would make the film the George Fitzmaurice version, The Cheat (1923). However, Gordon’s description of the crew and cast (including a particularly unkind assessment of Fannie Ward) would suggest that she read for or acted in the original and more renowned version directed by Cecil B. DeMille in 1915, a claim that appears equally unlikely (90-91). Gordon also goes into some detail describing her work on Fatty Arbuckle’s Brewster’s Millions (1921), but we should be equally skeptical of the accuracy of this claim since Gordon incorrectly cites the film as directed by Paul Powell and as Fatty Arbuckle’s last film before his trial for rape and manslaughter (87).  In her 1975 interview with Graham Shirley, Gordon says that the police asked her to make a statement about Virginia Rappe’s death but we then wonder why in her memoirs she maintains that she wasn’t herself present at the infamous San Francisco party that led to Rappe’s death (87). 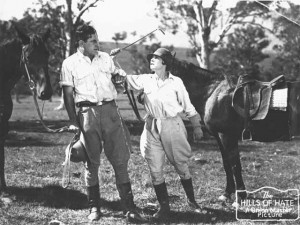 Dorothy Gordon and Gordon Collingridge, The Hills of Hate (1926). Courtesy of the National Film and Sound Archive of Australia.

On her return to Australia in 1925, Gordon was treated to the sort of media attention accorded to homecoming success stories. On the basis of her assumed status in Hollywood, she was almost immediately cast as the lead in Raymond Longford’s Hills of Hate (1926), a melodrama produced by Australasian Films that was Longford’s last production for that company. Though little is known about this film, Gordon herself in her autobiography concedes that it was not, as she says, a “worldbeater” (96). The film did, however, provide her with an introduction to Raymond Longford’s son Victor who was an associate producer on the film. At the conclusion of filming, Australasian asked Gordon to collaborate with Victor Longford on the screenplay for one of the most ambitious productions undertaken in Australia, the convict epic For the Term of His Natural Life (1927). 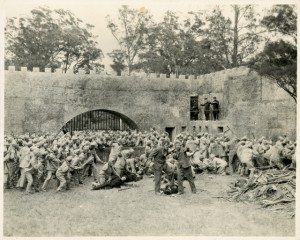 Dorothy Gordon, For the Term of his Natural Life (1927). Courtesy of the National Film and Sound Archive of Australia.

Gordon readily agreed, on the understanding that the American action director Allan Dwan would be brought in to helm the production. To her horror, instead of Dwan, the lesser-known Norman Dawn arrived, a fact only she seemed to recognize, having worked previously with Dwan in the United States. Norman Dawn proceeded to dismantle Gordon and Longford’s screenplay, preferring instead to work directly from the novel, and they requested that their names be removed from the credits. Gordon’s association with the film continued, however, and extended to location and prop research. For this she received an art direction credit. In her 1975 interview, Gordon is scathing about Dawn, calling him an “egomaniac” and describing his involvement in the production as “The biggest con job I have seen in films.” On its release the film was panned by critics for its narrative shortcomings yet its visual impact and impressive special effects continue to be admired. We can only speculate about the different film that might have been made from Gordon’s screenplay. In her interview with Graham Shirley, she proposes a less literal rendering of the sprawling novel, claiming that she and Longford were aiming for an international audience and were more respectful of their audience, leaving out scenes such as one featuring cannibalism. The impact of the film on Gordon seems to have been far greater because For the Term of His Natural Life (1927) was the end of her film adventure. Although her career in cinema never reached the heights of those of her Australian contemporaries such as Sylvia Breamer and Louise Lovely, Gordon’s various roles in the early Australian and American film industries suggests there is further research to be done on the transnational dimensions of early film production 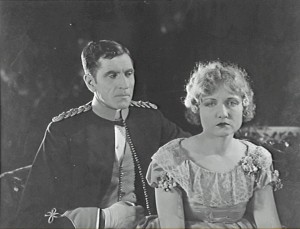 Eva Novak and Dunstan Webb, For the Term of His Natural Life (1927), Dorothy Gordon (w). Courtesy of the National Film and Sound Archive of Australia.