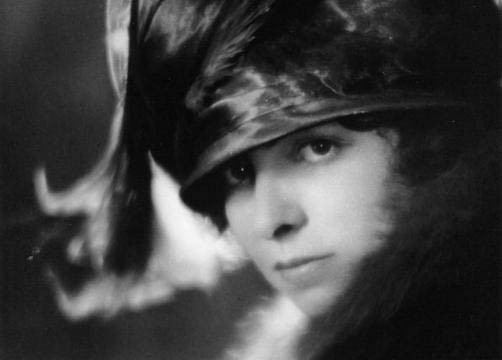 When she moved to Southern California as an actress with the Nestor Film Company in late 1911, Dorothy Davenport became one of the first members of the early film colony soon to be known as Hollywood. One early biography appearing in Moving Picture Stories reported that the actress had remained with the eastern branch of that company until late 1912 (31). However, a photograph in the Los Angeles Public Library shows the personnel of the Nestor Company in Pasadena, California, on December 23, 1911, with Dorothy Davenport a prominent member of the stock company. While at Nestor, which soon became a unit of Universal Pictures, she met actor Wallace Reid, whom she married in October of 1913. Both were popular players at Universal during the mid-teens, but Reid’s career accelerated after 1915 when he signed a long-term contract with the Jesse L. Lasky Feature Play Company and starred in a number of Cecil B. DeMille films, the year before the company merger that produced Famous-Players Lasky. Davenport Reid performed screen work less and less after giving birth to a son in 1917, though she was often featured in fan magazine stories about the Reids’ domestic life, like the 1921 Photoplay article “Where Bill Lives!” 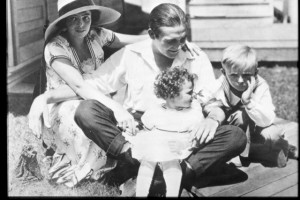 Dorothy Davenport Reid with Wally Reid and children. Courtesy of the Museum of Modern Art. 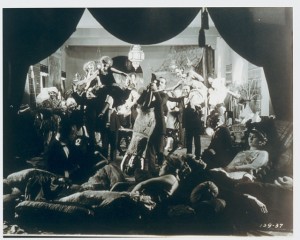 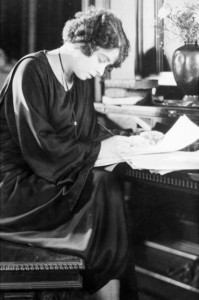 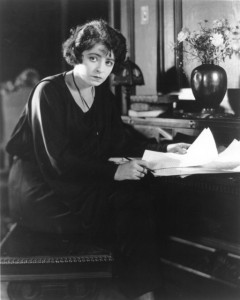 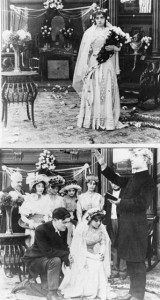 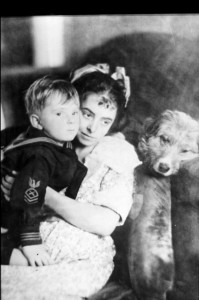 Dorothy Davenport Reid  with son and dog. Courtesy of the Museum of Modern Art.

Wallace Reid’s international stardom was the context for Davenport Reid’s emergence as a motion picture author in the mid-1920s. When the nation’s newspapers reported that Wallace Reid was a drug addict and severely ill in a sanitarium, Davenport Reid became the chief interpreter of her husband’s illness. When Reid died on January 18, 1923, she quickly returned to the screen to make Human Wreckage (1923), a film about the tragic consequences of the illegal trade in narcotics. While she performed the role of a drug addict’s wife in Human Wreckage, her relation to the production was far more extensive than that of a featured player, yet the question of her “authorship” of this and of the two subsequent social problem films credited to her, Broken Laws (1924) and The Red Kimona (1925), remains a critical problem for women’s film history. Human Wreckage is a lost film high on the list of “most wanted” from the silent era. Research establishing the specific contributions Dorothy Reid made to these film productions would be welcomed, though a far more important historical task is determining the political and ideological contexts for her emergence as a unique social authority involved in filmmaking in the late silent period. Each of the three films was promoted in fan magazines and newspapers as Mrs. Wallace Reid’s personal statement on a particular social issue—drug addiction, juvenile delinquency, prostitution—yet none were officially directed or written by Davenport Reid. The first two films were made under contract with the Thomas Ince Company, but after Ince died mysteriously in 1924, Broken Laws was copyrighted as a “Mrs. Wallace Reid Production.” Mrs. Wallace Reid Productions then produced The Red Kimona, but according to advertisements in the 1925 and 1926 Film Daily Year Book, her company also claimed the two Ince pictures as its own. Each film begins with a short prologue in which Mrs. Wallace Reid, in a direct address to the film audience, endorses the motion picture as an important message about a matter of public concern. Davenport Reid used these prologues to advocate for particular social policies, institutional responses, and changes in popular attitudes.

Davenport Reid’s ability to become a “film author” rested, in part, on her ability to speak from the sometimes contradictory positions of Hollywood producer, actress, widow, mother, and social reformer. Despite the challenge that the social problem films pose for received notions of women’s film authorship, there has been little sustained research on these unusual works, their reception, or Davenport Reid’s attempt to innovate alternative production practices and forms of authorship. Most historians have simply attempted to settle the question of her creative contributions by recourse to conventional divisions of studio labor (Brownlow 1990, 91; Foster 1998, 317; Slide 1996b, 89). Significantly, when Gabrielle Darley sought $50,000 in personal damages because The Red Kimona had used her life story and name without permission, neither Walter Lang, who received screen credit for directing, nor Adela Rogers St. Johns, on whose story the film was based, nor Dorothy Arzner, who had written the scenario, was named in the suit. Instead, producer Davenport Reid, cameraman James Diamond, and production manager Cliff Houghton were the named defendants.

Davenport Reid eventually took conventional screen credit as a director on Linda (1929), a backwoods melodrama about a young woman forfeiting her education and emotional happiness to oblige the social expectations of various men. The extant film presents an interesting portrayal of strong female friendships and loyalties. Linda, played by Helen Foster, accepts an arranged marriage to a much older man in an effort to save her mother from her father’s violent attacks. In its sensational treatment of domestic violence, arranged marriage, and bigamy, Linda looks toward the exploitation films Davenport Reid would direct for independent producer Wills Kent in the early 1930s; however, in its portrayal of Linda as a potential social worker who ultimately achieves her moral authority through reaffirming her domestic and maternal responsibilities, the motion picture looks back to the social problem films of the mid-1920s and the vicissitudes of Davenport Reid’s own public and professional identities.

Some historians have argued that Darley’s lawsuit against Davenport Reid put an end to her company, but Los Angeles County court records show that the privacy case, initially decided in Dorothy Davenport Reid’s favor, was not reversed on appeal until 1931, after the company had disappeared. Explanations of its failure might be best sought in Davenport’s Reid’s unusual and precarious position in the film industry. Rather than establishing an oeuvre of film directorial efforts, more research is needed on the alternative business and production practices Davenport Reid made possible, as well as on the cultural politics of her self-promotion as a social authority. A more systematic consideration of publicity materials should aid the latter project, while the former might be fruitfully explored if business records of her company are found, though both the trade journals and the Thomas Ince papers already indicate her exceptional place in the industry in the mid-1920s.

Brownlow, Kevin. Behind the Mask of Innocence. New York: Knopf, 1990.

A Brave Little Lady (1912) via the EYE Filmmuseum (Dutch intertitles)

Erroneous production credits have been commonplace for Dorothy Davenport Reid, particularly for the first three films she made after her husband’s death in the period 1923 to 1925. For example, while she is sometimes credited with writing the story for Human Wreckage, in all likelihood she had nothing whatsoever to do with the scripting process. C. Gardner Sullivan wrote the script for the film, most likely basing it on an untitled seven-page story treatment by Will Lambert that still exists in the file for Human Wreckage in the papers of Thomas Ince at the Library of Congress (see note 23 in Anderson, 104). The idea that Davenport Reid authored the film was, of course, widely promoted in the publicity materials produced by the film’s distributor, Film Box Office (FBO). Similarly, Davenport Reid is often promoted as the co-director of The Red Kimona, an idea that seems to have its source in Anthony Slide’s contention that she sat next to director Walter Lang during the entire production and “approved each take,” a claim he garnered from a 1974 interview with the film’s lead actress, Priscilla Bonner (Slide1996, 89). Nevertheless, Davenport Reid is not listed as the film’s director in the original on-screen credits, nor is she listed as a director in existing copyright and censorship records. According to the minutes of its board of directors, the Thomas H. Ince Corporation entered into a contract with Davenport Reid on February 1, 1923, for the making of two productions in which she was to star and for which she was to receive a percentage of the receipts. Those two motion pictures were Human Wreckage and Broken Laws, both produced by Ince and both distributed by FBO. Each featured “Mrs. Wallace Reid” as the principal actress, and each also included an extended prologue in which Davenport Reid addressed the film audience “as herself,” a role sometimes described as a “presenter” or an “endorser.” When Ince died at the end of 1924, Davenport Reid formed Mrs. Wallace Reid Productions to make The Red Kimona, and trade advertisements for that production company subsequently assumed credit for the two earlier Ince productions, perhaps leading researchers to think that Davenport Reid had also produced those films. Her first verifiable producer credit is on The Red Kimona in 1925 (though it is possible that she co-produced Broken Laws), while her official directorial debut was on Linda in 1929. Unfortunately, Davenport Reid’s contributions to the motion pictures of the mid-1920s have been forced into familiar production roles at the expense of appreciating her unique “authorship” of the films though documenting her more significant labor as a cultural authority on social problems in the 1920s. Along with Thomas Ince, Adela Rogers St. Johns, and William Randolph Hearst, Davenport Reid seems to have been committed to a mass media of reform in which women’s voices vitally mattered, an interventionist project that, by the mid-1920s, was being rapidly eclipsed by the consolidation of a corporate entertainment industry. Reid is not credited at all for His Son, Boomerang and only reference is Braffs. Cub Reporter’s Big Scoop is unconfirmed by IMDB, she is not credited elsewhere.