There is a good deal of inaccuracy and mythologizing about the life of Anzia Yezierska. Some of this misinformation was generated by the public relations offices of Hollywood; other misrepresentations resulted from Yezierska’s own obfuscation, especially concerning her age. Yezierska may have been born in 1880 (although the date is disputed), in a Polish-Russian village, the youngest of nine children. She grew up in a poor, Jewish Orthodox family on New York’s Lower East Side. She left elementary school to help support her family, but evidently a burning passion for learning and a desire to make something of herself led her to Columbia University in 1901, where she lied about a high school diploma to gain admittance. She began writing short stories in 1913 about the Jewish ghetto. The success of her short story collection, Hungry Hearts, published in 1920, led to an offer from Samuel Goldwyn for the motion picture rights and a chance to work on the screenplay in Hollywood. She was offered $10,000 and dubbed “the sweatshop Cinderella,” a phrase created by Howard Dietz, a publicist at the Goldwyn studios.

The story of the motion picture Hungry Hearts (1922) centers on a poor immigrant family and the efforts of Hannah Levin to beautify her apartment by painting the walls white. When the landlord then raises the rent, Hannah destroys the kitchen with a meat cleaver. There are differing accounts of what happened in Hollywood, but the most completely documented is by Yezierska’s daughter, Louise Levitas Henriksen, in her biography. Yezierska was evidently naïve about how much control she would have over the finished work. Although she and Hollywood writer Julien Josephson wrote most of the screenplay, their work was later edited by the veteran comic writer, Montague Glass, who took out most of Yezierska’s ghetto dialogue and provided a happy ending. In the end she received no screen credit for the writing. Yezierska viewed Glass’s alterations as a desecration. She later wrote in her autobiography: “This man, with his beaming kindliness, turned out his caricatures of Jews like sausage meat… My book is my life… I’ll not let them murder it with slapstick” (1950, 87). The most powerful scene depicts Hannah destroying the newly painted kitchen. Although highly melodramatic, the anger, frustration, disappointment, and pride are all evident in her hysterical attack on the walls. Though most of the newspaper critics found the film overly sentimental, the film historian Kevin Brownlow, viewing a copy rediscovered in 1978, concluded that it was one of the best Jewish pictures of the entire silent period (1992, 392–404). 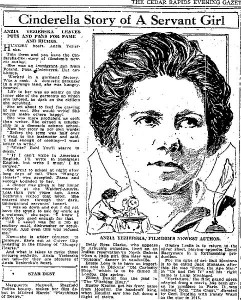 Yezierska’s time in Hollywood was not surprisingly marked by her ambivalence towards money. Coming from a life of poverty that also provided the inspiration for her writing, it appears she could not reconcile the two value systems. On the one hand, she was pleased with the new celebrity; on the other hand, she was repelled by what she saw. This conflict seems to have affected her ability to create and to produce more screenplays for Goldwyn Pictures. After one month in California she returned to New York, also rejecting a three-year contract offered to her by producer William Fox. According to her own account, “This is What $100,000 Did To Me,” published in Cosmopolitan magazine, she left Hollywood “a tortured soul with a bank account” (154).

In New York she began a novel about a woman whose life is motivated by the desire to rise out of poverty by marrying well. It was published as Salome of the Tenements in 1922. Unlike the critically acclaimed Hungry Hearts, Salome of the Tenements received many negative reviews based on the grasping nature of its heroine, Sonya. Even the turn of events that leads Sonya to leave her husband, John Manning, a wealthy, repressed WASP did little to warm the critics to the narrative. The book was purchased by Famous Players-Lasky and released in 1925. Unlike Hungry Hearts, Yezierska had no involvement in the production. The screenplay was written by Sonya Levien, another Jewish female writer. Like much of Yezierska’s writing, there is a high degree of autobiography in Salome, and the story is especially telling as it reflects Yezierska’s own conflicts over money. The character of Manning is modeled after the educator John Dewey, whom Yezierska met at Columbia University in 1917 and with whom she had a platonic love affair. Dewey seems to have haunted Yezierska for the rest of her life, and many of her male characters are modeled on him.

After the filming of the two silent motion pictures based on Yezierska’s source material, her association with Hollywood ended. For the rest of her life she continued to write and publish, but with mixed success. She married once in 1911 and left her husband one day later. In 1912 she married again, producing one daughter, but she temporarily left her daughter with her husband in order to pursue her writing career. In 1950, Yezierska published her autobiography, Red Ribbon on a White Horse. She died in 1970.

Anzia Yezierska’s critical reputation has fluctuated over the years. Mostly ignored after the 1930s, she was reevaluated in the wake of the Women’s Movement, especially because of the plight of poor, ethnic immigrant women. In 1996, a new edition of Hungry Hearts with introduction by Vivian Gornick was published. However, debates continue over the artistry of her writing. Yezierska’s time in Hollywood reveals a good deal about women’s social and economic challenges in the early 20th century, especially those of poor women. Most telling are words uttered by Yezierska’s protagonist in the 1923 novel, Children of Loneliness, who says, “My one story is hunger.” Like Yezierska herself, and so many other young women who wanted to make something of their lives, this hunger was literal as well as symbolic.

Brownlow, Kevin. Behind the Mask of Innocence: Sex, Violence, Crime: Films of Social Conscience in the Silent Era. Berkeley: University of California Press, 1990.

1. Anna Yezierska as Screenwriter and Author of Source Material

Though records show that Yezierska worked on the screenplay of Hungry Hearts, she was not credited on the film.