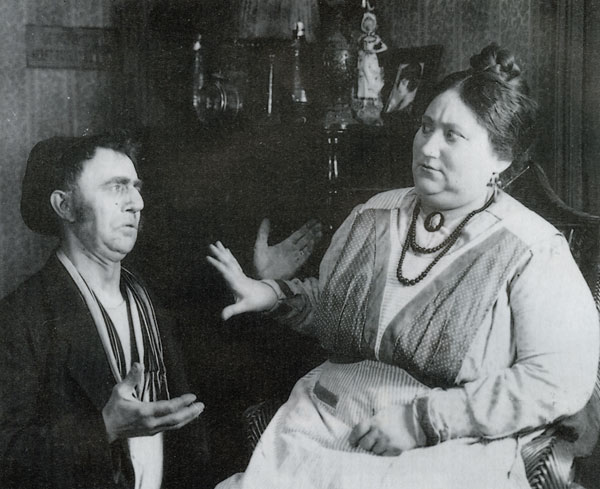 Adriënne Solser was the only actress other than Caroline van Dommelen who directed silent era films in the Netherlands. Between 1924 and 1928, Solser co-directed two feature-length farces and acted the leading parts in another two for her own company, combining production and distribution, the Hollando-Belgica Film Mij. or Dutch-Belgian Film Company “Eureka” (Förster 117). Each film featured a female protagonist named Bet, a figure shaped after the stage persona of the Amsterdam folk character that Solser had created and successfully presented in Dutch “variété” or vaudeville shows and revues since 1914. With this stage persona, Solser fashioned her own variant of the so-called “Jordaan-genre” in Dutch popular theatre in the 1910s and transferred and adapted it to the cinema in the 1920s. The “Jordaan-genre” was a local and cross-disciplinary fictional genre that remained popular from around the turn of the century throughout the 1930s. It could take the form of vaudeville acts, sketches, revues, or full-length plays or films, but its core was mocking the inhabitants of the poor man’s neighborhood called “the Jordaan” in Amsterdam. The generic requirements included the use of the local tongue and humor, the composition of lifelike characters, and the insertion of sing-alongs and traditional dance (Förster 130–131). Adriënne Solser’s variant was closely related to the sketches and plays designed and acted by her younger brother Lion Solser in the early 1910s, the production of which ceased after his suicide in 1915. Like Lion Solser’s longer pieces, her films and stage performances had a female protagonist and an episodic rather than melodramatic structure; used current events to motivate the narrative; and were primarily farcical, with a social note, in contrast with other variants that were social dramas with comical notes. Adriënne Solser’s Jordaan persona was seconded by a henpecked husband and moved from stage to screen (Förster 132).  Solser was instrumental in this move across disciplines, initially as the leading actress in two farces that were produced and directed by a colleague, then subsequently as the producer, co-director, and leading actress of the Eureka company’s productions (Förster 114-115).

It is further significant that Solser took an active part in the six films in which she played the leading part, accompanying their screenings with onstage performances in person. She maintained this idiosyncratic practice even after sound film had become the rule, touring again with her productions from October 1932 until June 1934. Her live performance went far beyond the function of the lecturer of earlier years. Solser used to double her on-screen character, to speak the dialogue, to crack pointed jokes, and to perform the sing-alongs. In doing so, she drew from the interactive combination of stage appearance and film screening that comic performers had established within the revue of the mid-1910s, in which the comical effect was produced by the simultaneous presence of the actor on screen and on stage (Förster 109–110). Contemporary reviews attest to the fact that Solser’s double performances guaranteed her success with the public. The trade paper Nieuw Weekblad voor de Cinematografie, for instance, contended with regard to Solser’s second production, Bet trekt de 100.000/Bet Wins the Lottery (1926):  “Adriënne Solser does not pretend to create a work of art. […] When she makes a film, she asks herself how to entertain the audience for a while, so that people laugh their heads off and forget about themselves. To that end, she replays the entire film in person. […] The comic performer Adriënne Solser […] knows perfectly how to please the audience and making them laugh is what she strives for. For that reason, this film has to be perceived from a completely different angle than any other film. People attend the screening to see Adriënne Solser, and perhaps even more to hear her” (“Bet trekt de 100.000” 8).

In contrast to Dutch film historians, who found it difficult to come to terms with Solser’s cinematic unpretentiousness, the contemporary public did not mind as long as they were entertained. Solser’s production practices teach us to keep looking beyond the history of film as art or film as an autonomous form of entertainment, not just with respect to early and transitional cinema, but with respect to the later years of silent cinema as well (Förster 129).

Two of Adriënne Solser’s productions, Bet, de Koningin van de Jordaan/Bet, the Queen of the Jordaan (1924) and Bet naar de Olympiade/Bet to the Olympics (1928), have been preserved. Fortunately, Solser’s live accompaniment has also been reconstructed, based on her own notes, on songs from the era, and on lip-reading. The notes, now housed in the EYE Film Institute in Amsterdam, were found in Solser’s handwritten repertory books that also include numerous verses, dialogue lines, and song texts that she delivered on stage between 1904 and the mid-1930s.

There is more to say about the films than the generic conventions delineated above. In her first production, Solser aptly turned her own forty-year stage jubilee into that of a fishmonger on the market, occasioning exuberant scenes set in the Jordaan and hilarious situations set outside: on a trip through the city park, to the zoo, and even out of town to the beach. The shooting on location gives the images a documentary quality. The comedy derives from the uncultured behavior of the Jordaan couple, from Bet’s bossiness to Hein, and, last but not least, to Bet’s big bearing—a feature of the actress that she made fun of in her last production. As its title suggests, Bet now prepares for taking part in the Olympics. The Games were indeed held in Amsterdam in 1928, but Solser satirized the historical fact that women were granted participation for the first time. The film also includes scenes mocking other women’s occupations of the day, such as the girls parading their legs in revues and the intrepid serial queens saving the hero. This is not to say that the work should be read as a statement on contemporary issues. For Solser, the local, topical, and gender-related nonsensicality was simply a means to create fun. If enlivened with performance, it is enjoyable to this day.

Vocalist Jet Pit reconstructed the live accompaniments for Bet, de Koningin van de Jordaan and Bet naar de Olympiade. FIAF does not credit Adriënne Solser as producer and actress of Bet naar de Olympiade. Eureka is not mentioned as the production company either. IMDB, however, credits both Adriënne Solser as actress and Eureka as the production company; however, it credits Andé Boesnach as writer and director together with Theo Frenkel.