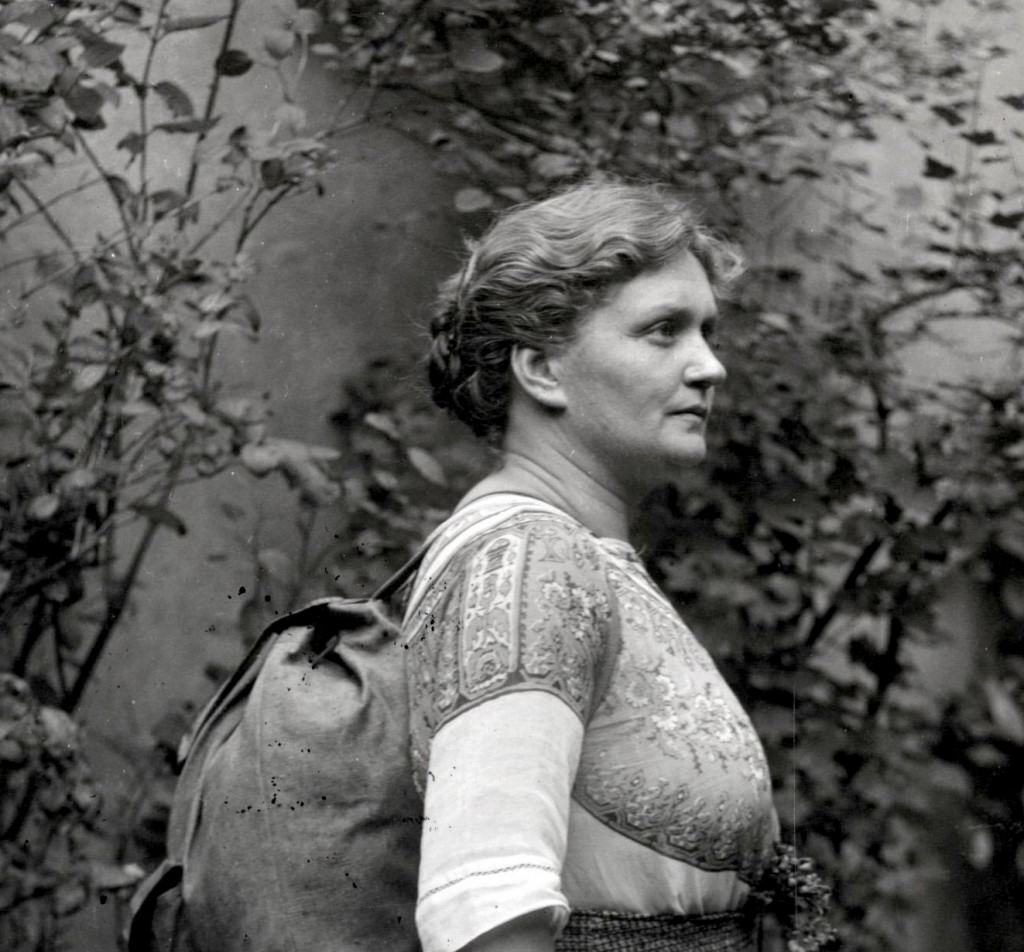 Caroline van Dommelen directed three fiction films, two of which were co-directed with Léon Boedels, between 1911 and 1912 for the production company Film-Fabriek F.A. Nöggerath  in Amsterdam, The Netherlands. She was the first woman in the Netherlands to direct films, and was succeeded in this in 1924 by the only other female filmmaker in Dutch silent cinema, Adriënne Solser. According to Geoffrey Donaldson, van Dommelen’s name as the director appeared in the advertisements of all three films (1972, 33). In her reminiscences, a first, five-part, series of which were published in the magazine Het Leven in 1921 and another, four-part, series in the film paper De Rolprent in 1925, she says that she wrote one of the screenplays, acted the female leads and directed the actors while she charged a co-director with supervising the mass scenes (1925, 188; 236).  For one film, Vrouwenoogen/Women’s Eyes  (1912), she was the sole director. She furthermore acted, between 1911 and 1920, in ten films, in eight of which she took leading roles. Together, these add up to more than 11,000 meters or roughly 33,000 feet of nitrate film of which a mere 368 meters or about 1,000 ft. have been preserved, yet only as fragments of  Oorlog en vrede 1914 and Oorlog en vrede 1918 (both 1918), two later films in which she played minor roles. No prints of the films van Dommelen directed survive today.

Paper documentation is equally scarce. Of two of the films she directed, only one review of each could be traced, and of the third, Vrouwenoogen, not a single review. The Algemeen Handelsblad review of her first film, De Bannelingen/The Exiles, indeed credited van Dommelen with the direction, and favourably so: “The shots are very varied and offer everything that belongs to the cinema: beautiful nature scenes with the necessary action, refined interiors, and… most importantly, fine acting that comes out well” (1911, 10). In contrast, in the review in De Kunst of her third film, Graaf Willem IV van Holland / Earl William IV of Holland, van Dommelen was just listed as an “artieste” [player]. The critic applauded the acting and the production values, but criticized stylistic flaws and the tedious plot for which producer Nöggerath and co-director Léon Boedels and the cinematographer were held responsible (1912, 748).  The record in the press is so scant that if Caroline van Dommelen had not repeatedly referred to her early film directing in her successive reminiscences, her work as a film director in the early 1910s might have been completely missed.

Caroline van Dommelen on a holiday hike circa 1914. Courtesy of Wikimedia Commons.

Caroline van Dommelen wanted to study to be a doctor, following the Dutch feminist role model Aletta Jacobs, but as a child of a theatrical family, with a father and three brothers being professional actors, she went to drama school. Acting for the legitimate stage was the centerpiece of her long career, and contemporary critics confirmed that as a stage actress she was sensitive, passionate and versatile (1909, 185). However, she also wrote, translated and directed plays. In addition, she was a novelist, a photo editor of an illustrated weekly, and a journalist who published about traveling, sports, and fashion, as well as her experiences in theatre and cinema. For several years, she ran a model farm for bee keeping and chicken breeding. Unlike many stage actors in 1912, she considered working in cinema attractive and thrilling.  Eventually van Dommelen quit because she felt it to be too demanding when combined with her work for the stage (van Dommelen 1921, 435).

In her reminiscences, van Dommelen revealed herself as proud of having been a film director at Film-Fabriek [F.A. Nöggerath], a fully equipped studio that, as a first in The Netherlands, aimed to produce ambitious fiction films. Franz Anton Nöggerath Jr. did not spare on sets, costumes, locations, actors or extras, but lost so much money with this policy that he had to give up production in 1913 (van Dommelen 1925, 199). The films that van Dommelen directed were also ambitious in length, considering that the standard film at the time ran approximately 350 meters (1,000 ft.). Her three films ran 1,000 meters (about 3,000 ft.),  1400 meters (about 4,200 ft.) and 750 meters (2,250 ft.), respectively.

Little can be confirmed about either the subject of Vrouwenoogen or van Dommelen’s role in it, although one production still from the film survives at Eye Film Institute Netherlands, showing an interior shot with a man and two women, one of whom is van Dommelen. It appears to be a confrontational scene, the two women in conflict with one another, the man with a letter in his hand appearing to ask for an explanation from van Dommelen’s character.  De Bannelingen, in contrast, was an adaptation of Oscar Wilde’s play “Vera or the Nihilists,” which dealt with the anarchist resistance against tsarist Russia. Van Dommelen played a heroic woman who managed to set the anarchists free from prison but died in the fight. Graaf Willem IV van Holland, the third film that van Dommelen co-directed, was a romance period piece set in Holland in 1345 in which she played the leading part, a woman who loves a man from a rival family, but gets him nevertheless and makes the families reconcile in the end. Further research might disclose the reasons for selecting these motives and roles.

------. Of Joy and Sorrow. A Filmography of Dutch Silent Fiction. Amsterdam: Nederlands Filmmuseum, 1997.