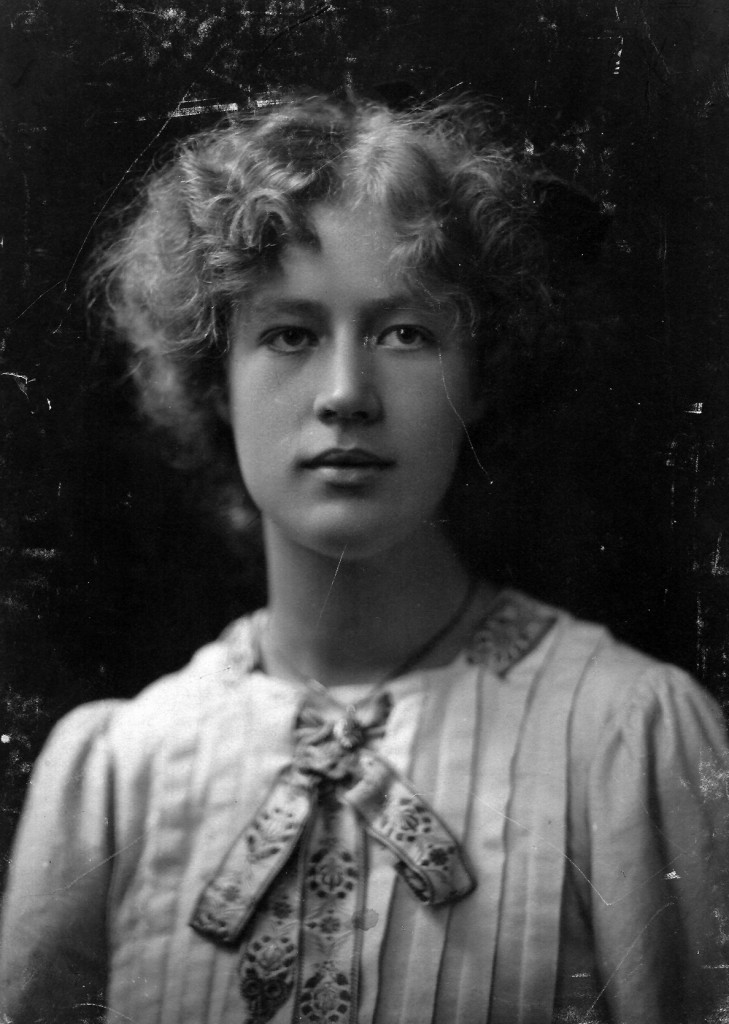 The practice of rendering inter-title cards more decorative and expressive by means of creative typography, ornate borders or other types of illustrative artwork was first picked up by the Swedish film industry around 1919, a few years after it had become established in Hollywood. Swedish audiences were already familiar with so-called “art titles” from imported American films, and the incorporation of this feature into domestic productions partly answered more general calls for Swedish cinema to reinvent itself according to international standards. Furthermore, as had previously been the case across the Atlantic, the emergence of this practice followed debates about the artistic value and usefulness of title cards. Claire Dupré la Tour has argued that art titles along with the success of the “Loos-style” title writing—a reference to the inventive writer Anita Loos—granted the inter-title a more “privileged status vis-à-vis the image” and helped popularize the idea that inter-titles could make a significant contribution to a film’s success. This is as true for the Swedish context as for the American (329). 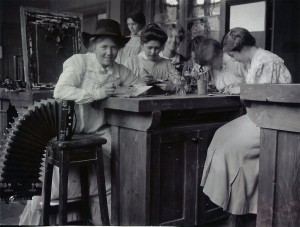 Throughout the 1920s, Alva Lundin was the most prolific credit title and inter-title designer in Swedish cinema and she designed title cards for at least nineteen silent films. It is difficult to determine the exact number, partly because only a small collection of documents from Lundin’s company are extant and partly because she only started marking the title cards with her signature “AL” after 1927. A number of the original art title cards preserved in the Swedish Film Institute are unsigned, and because Lundin’s style and motifs were fairly generic in many cases, it can be difficult to determine authorship with complete certainty. Furthermore, Lundin’s titles are, in a number of cases, missing from the extant film copies; they might have been removed during restoration attempts, but it is also possible that they never made it into the finished films in the first place. As far as we know, Lundin created her first title cards in 1919, but her career within the film industry took off more fully after she achieved critical acclaim for her witty art titles in Mauritz Stiller’s comedy Erotikon (1920). Following the transition to sound, she went on to create credit sequences for around four hundred feature films, as well as illustrations, graphics and typography for a still unknown, but undoubtedly large, number of educational and promotional films. She continued working as a title designer until the end of the 1950s. 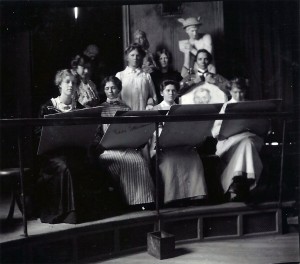 Some information about Lundin’s early years can be pieced together from the Swedish population registry and public tax records, as well as private records and accounts provided by her living relatives. Lundin’s father died while she was still a child, at which point her mother moved the family to Stockholm to work as the manager of a retirement home for widows. In 1904, at the age of fifteen, Lundin enrolled as a student in the female section of the art school Tekniska skolan, which later became the University College of Arts, Crafts and Design, where she stayed for two academic years and graduated with middling grades. As historian Ingrid Ingelman has outlined, the Swedish art schools had accepted female students since the middle of the 19th century and it had become increasingly acceptable for women to work as artists or illustrators, but it was still fairly unusual (32-33). Tekniska skolan specialized in teaching the applied arts and, according to Lundin’s diploma, she studied, among other things, freehand drawing, shading techniques, figure and landscape drawing, painting, typography, and calligraphy. No actual records have been found supporting the kind of work Lundin did following her graduation, but according to her relatives she worked at the publishing company AB Hasse W. Tullberg in the mid-teens where she probably was hired for her skills as a calligrapher and illustrator. Alledgedly, Lundin met her future husband, Sven Lundin, while working at Tullberg’s. They were married in 1915 and subsequently left their jobs to start their own company: Lundins Ritbyrå/Lundin’s Drawing Company. An article about Lundin’s company, published in the film magazine Filmnyheter in 1924, refers to both Alva and Sven as “young artists” (8), but her relatives are adamant that they had a strict division of labor: she was the artist and he was the manager and administrator. 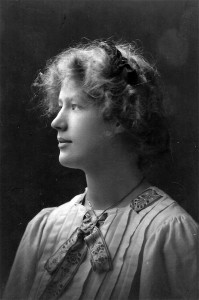 Portrait of Alva Lundin as a young woman. Private Collection.

The company’s primary source of income was providing typographical designs for letterheads and diplomas. In 1919, Lundin was commissioned by the film company Svensk Filmindustri to design the typography and produce the handwritten title cards for Mauritz Stiller’s Herr Arnes Pengar/Sir Arne’s Treasure. This was probably her first assignment as an inter-title designer, but since no records concerning Lundin’s transactions with the film industry have been found, it is still unclear exactly how and when this alternate line of business was established. Either way, Stiller and Svensk Filmindustri must have been pleased with Lundin’s work, because the following year they asked her to provide far more elaborate art titles for Erotikon. Only a few Swedish films had previously sported illustrative artwork and these had predominantly been of the decorative kind that added fairly little in terms of narration. Lundin’s illustrations received particular admiration because they delivered witty, playful and clever comments on the plot and the characters, which helped deepen the audience’s understanding, while also providing comic relief. 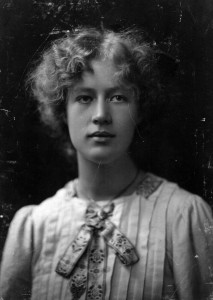 Portrait of Alva Lundin as a young woman. Private Collection.

Only a few years later, in 1924, Lundin was described in a Filmnyheter article as “the only [Swedish] film title specialist” (8). That same year Lundin had completed a third and even more ambitious collaboration with Stiller. This time she had been commissioned to create between three to four hundred art titles for Gösta Berlings saga (1924), a task that, according to one journalist, had “required the efforts of an able man for several weeks,” “the man” in this case being Mrs. Alva Lundin (8). This is not the only article published about Lundin’s work during the 1920s that explicitly commented on the fact that she was a woman. While praising her work, the journalists often expressed some measure of surprise at her gender, particularly when observing that she had both artistry and wit. The same writer that acknowledged her status as a “film title specialist” went on to describe her as such:

Mrs. Lundin is an energetic and inventive lady, and the film directors that have had the opportunity of collaborating with her are delighted with her work. This is not surprising when considering that she has a never failing ability to hit the nail on the head. In addition, she has a sense of humour–something that, according to prevalent prejudice, isn’t that common amongst the female sex (8). 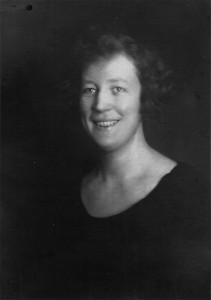 Portrait of Alva Lundin that accompanied the film press in the early 1920s. Private Collection.

While Lundin’s choice of profession and body of work were occasionally met with some surprise and prejudice, her career can still be seen as fairly characteristic of female art students of the time. Few women were able to become successful independent artists; most either worked as art teachers or illustrators if they continued working after their education at all. As Ingelman has shown, female artists were particularly frequent illustrators of fairytales and children’s books, probably because these were genres considered to belong to the “female sphere” (70-71). This line of work could perhaps be seen as a parallell to Lundin’s career within the film industry. Both children’s books and films have a history of being considered less prestigious when compared to the fine arts. Perhaps this actually made it somewhat easier for Lundin, as a female artist, to  sustain such a long and successful career.