Alice Smythe Jay was a cinema organist, conductor, composer, and inventor. She spent much of her career in Hawaii and the West Coast. Over the course of her career, Jay composed music for accompanying film and for the concert hall; conducted orchestras and ensembles in concert; became a well-known commentator on music for the cinema; made recordings to use in accompanying film; and patented her own recording process and ran her own production company using it.

In 1915, Jay, already an established cinema organist, became well-known nationally when she began corresponding with Ernst Luz, the editor of the “Music and the Picture” column in Motion Picture News. Discoursing on what music to use and what to avoid in cinema accompaniment, how to prepare a compiled score (a score made up of pre-existing pieces), and how to improvise, Jay’s letters, which Luz published frequently, offered erudite and practical advice and commentary on the creation and performance of music for film. It was essential, Jay wrote, that cinema musicians have a comprehensive knowledge of Western art music as well as current popular songs. She insisted that study—both of long-existing classics and of new music—was indispensable for compiling a successful score, and noted that her own sources were the Western European canon of art music; well-established vernacular songs; and new music, both that written for the screen and published as photoplay music and new popular songs (Burton 1915, 191). 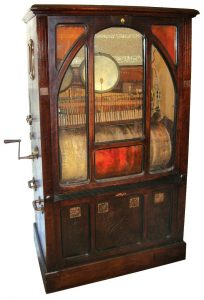 An orchestrion, an automated instrument designed to replicate the sounds of an orchestra in a moving picture theater. Private Collection.

Jay’s desire for good motion picture music, along with her frequent frustrations with poor accompaniments, led her to begin making recordings of her scores for the many and varied automated instruments that were becoming popular in the cinema, such as the player-piano-like Bartola and orchestrion. Believing that recorded accompaniments would bring about a time “when music will fit into each and every picture the same as opera music to a libretto” (Jay 1919, 2346), Jay wanted to produce her recordings for all makes and models of instrument. Finding that many recording companies were limited to a specific format of recording, she filed plans to construct a $12,000 factory in Los Gatos, California for “the manufacture of music rolls” in February 1916 (“New and Enlarged Shops” 78). She began marketing the rolls that same year in the major trade journals, advertising that her “hand-played inspiration music rolls for motion pictures” were, when appropriately used, a complete replacement for a live orchestra (Jay 1916, 1670). Jay also made short rolls that could be used for specific kinds of scenes and combined to create a compiled soundtrack of rolls, according to a March 1916 Smythe Jay Music Company advertisement in Motion Picture News (1365). Her piece “The Storm at Sea,” one of her only known extant works, was composed for one of these rolls.

In June 1921, Jay patented her own process for their production, the “Masteroll Perforated Machine” (Jay 1921, n.p.). For all of her rolls, Jay viewed a film several times before creating a score for it through both compilation and improvisation. She then recorded the score on her machine while watching the film to ensure accuracy in matching the music to the image. Her recordings, she wrote to Exhibitor’s Trade Review, produce “music rolls for automatic players and organs to be used in conjunction with moving picture presentation—cued and timed approximately fourteen minutes to a thousand feet of film. [….] The method covers a perfectly synchronized roll to the picture” (Jay 1921, 1274). Jay’s invention received good press; Music Trade Review noted  in August 1921 that the rolls should be a great success: “Certainly it appears that a step forward has been taken and that the long-prophesied art of synchronizing the film with suitable and universally available music has been worked out” (15).

At some point, however, Jay closed the Smythe Jay Music Co. and moved to Medford, Oregon, where she was the organist at the Rialto Theater and, according to the Medford Mail Tribune, conducted several ensembles (1923, 2). Jay appears to have gone into radio in the late 1920s, a common career change for many cinema accompanists. There are tantalizing references in newspapers from the late 1920s and early 1930s of “Alice Jay and orchestra” in the Burlington, Iowa, newspaper, and radio show references to “Alice Jay” in various Pennsylvania, Indiana, and Illinois newspapers, but little else. 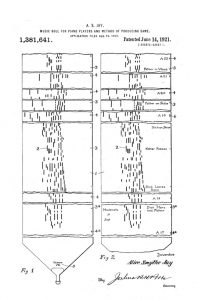 Jay’s influence on cinema musicians was likely considerable. As the in-house musician for large West Coast cinemas, hundreds if not thousands of people would have heard her accompaniments in the theater and on her recordings, which were shipped across the United States. Although much of her music is lost today, she had a deep and broad knowledge of the Western art music repertoire, and included works from the canon in her scores as a matter of course, influencing taste and creating musical connections with visual tropes. She insisted on the importance of developing this knowledge as essential to being able to create effective scores and to communicate with audiences. Audiences who heard and accompanists who made use of compiled scores by Jay experienced a blend of musical genres and sources that can be located in scores to the present. Her experiments in developing technology to pair music with film were replicated by numerous artists and companies, and encouraged the industry to seek out a satisfactory solution to creating synchronized sound. While much of her music is lost, the sounds she helped create for the cinema remain with us.