In 2017, to mark the centennial of Alice Guy Blaché’s visit to Columbia University, I wrote about her two lectures. It was a fairly open-ended post that outlined both what I knew and still did not know about these ephemeral moments in film history. Thanks to new information from WFPP readers, I am now able to share an update.

To recap my previous research, in 1917 Guy Blaché was invited by the “professors at Columbia University”[1]Alice Guy Blaché, The Memoirs of Alice Guy Blaché. Ed. Anthony Slide. Trans. Roberta and Simone Blaché (Metuchen, N.J.: The Scarecrow Press, 1986), 68. to give two lectures on cinema—the first on Friday, July 13 and the second on Friday, August 3. The first lecture reportedly covered “What themes to pick and how to handle dramatic situations, the rules of censorship in the different states and copyright laws.”[2]Alison McMahan. Alice Guy Blaché: Lost Visionary of the Cinema (New York: Continuum, 2002), 189. The second lecture was more technical and on “The Technique of Scenario Writing.”[3]“Mme. Alice Blache Lectures at Columbia.”Motion Picture News (11 August 1917): 981.

In the original post, I spent a lot of time trying to discern and unpack the relationship between Columbia’s School of Journalism and the university’s early photoplay writing classes. I kept finding mentions about journalism students in my research on Columbia’s early forays into film education, but I could not find archival documents referring to an official class on the subject at the School of Journalism. (I did, however, find a reference to an apparent one-off lecture that Columbia professor Victor O. Freeburg gave at the School of Journalism in October 1916.) On the other hand, there were official mentions of photoplay writing courses in the 1917 Summer Session bulletin (classes were listed as being held in East Hall) and in the 1917-1918 Columbia Bulletin of Information catalog, which listed photoplay writing under the seemingly separate Extension Teaching program.[4]University Extension Files, University Archives, Rare Book & Manuscript Library, Columbia University. In terms of Guy Blaché’s lectures specifically, I had two pieces of information to go on: Alison McMahan’s statement that the filmmaker was invited by the School of Journalism and a mysterious Dr. Landon who was cited in two short newspaper articles as the professor who invited Alice to speak.

In the time since my post was published, two new articles have been brought to my attention that further solidify Guy Blaché’s connection to the School of Journalism. In the first, entitled “Woman Talks on Scenario Writing,” a Trenton Evening Times reporter details how Guy Blaché was invited to “give a series of lectures on the art of scenario writing to the students in a course which specializes in that subject, offered in conjunction with the Pulitzer School of Journalism.”[5]“Women Talks on Scenario Writing.” Trenton Evening Times (5 August 1917): 22.  In the second, which appeared in Motion Picture News in September 1917, the writer refers to Alice’s audience of “journalistic students.”[6]“Four Art Drama Stars Seen in Variety of Fall Offerings.” Motion Picture News (15 September 1917): 1827. 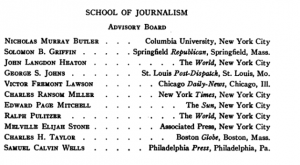 School of Journalism advisory board, 1917-1918 Bulletin of Information.

Furthermore, thanks to the two new articles quoted above and an email exchange with Martin F. Norden, I am now confident that this mysterious “Dr. Langdon” was actually John Langdon Heaton, a New York-based journalist who was instrumental in the creation of the School of Journalism in 1912. According to the Dictionary of American Biography, Langdon Heaton conducted “the detailed study and report on facilities for education in journalism on which [Joseph] Pulitzer founded the Columbia University School of Journalism.” [7]“John Langdon Heaton.” Dictionary of American Biography. New York: Charles Scribner’s Sons, 1944. Gale In Context: Biography. When the school opened, he “became a life member of the advisory board, representing the [New York] World, and he was instrumental in the selection of Talcott Williams as its first director.” Although most likely never a Columbia professor, Langdon Heaton did give a lecture on “The profession of journalism” at Columbia on October 7, 1912.[8]“Pulitzer Collections: About Joseph Pulitzer.” Columbia University Libraries. https://guides.library.columbia.edu/pulitzer/about. That Motion Picture News and the New York Clipper articles that I relied on four years ago (and indirectly Guy Blaché as well) called him a professor is not impossible to imagine, especially since he was so involved in the program’s creation and early existence.

While I still would love to confirm what this course “offered in conjunction” with the School of Journalism was and if it had anything to do with the photoplay courses mentioned in the bulletins above, I did recently find that the latter were still being taught in East Hall a year after Alice’s lectures, during 1918 Summer Session. It seems likely, then, that she was invited by the School of Journalism and Langdon Heaton rather than any of the professors associated with the photoplay writing courses. This did not surprise Norden, who suggested to me that since the School of Journalism was already open to women at the time, Langdon Heaton and others there may have been “interested in bringing in professional women who might serve as role models for the students.”[9]Norden, Martin F. Email exchange. November 2017. 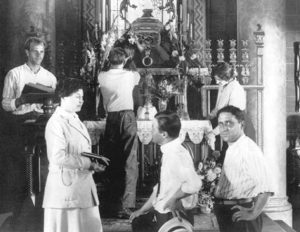 Additionally, I can add one more bit of information about Guy Blaché’s August 3 lecture, where she was asked to bring a film to screen for those assembled. Based on her descriptions, I had previously ascertained that she brought the now-lost House of Cards (1917) to show, most likely because it was a film that she had recently made. The new Motion Picture News article mentions another film, Behind the Mask (1917), which was released in September 1917 and is also lost. She seems, at least per the article, to have mentioned it specifically in her second lecture, perhaps because writing the screenplay was also a recent memory.

Since I published my original research report in 2017, I continued to look through Columbia bulletins. Interestingly, I did discover that, by the 1919 Summer Session, the photoplay writing courses taught by professors like Freeburg and Frances Taylor Patterson, and connected to the Extension Teaching program, were moved to the Journalism building (in rooms 206 and 612, specifically). This move, in addition to the new information about Guy Blaché’s lectures that I have just outlined, highlights a fruitful avenue for further investigation: the relationship between early film study and journalism, both at Columbia University and more broadly.