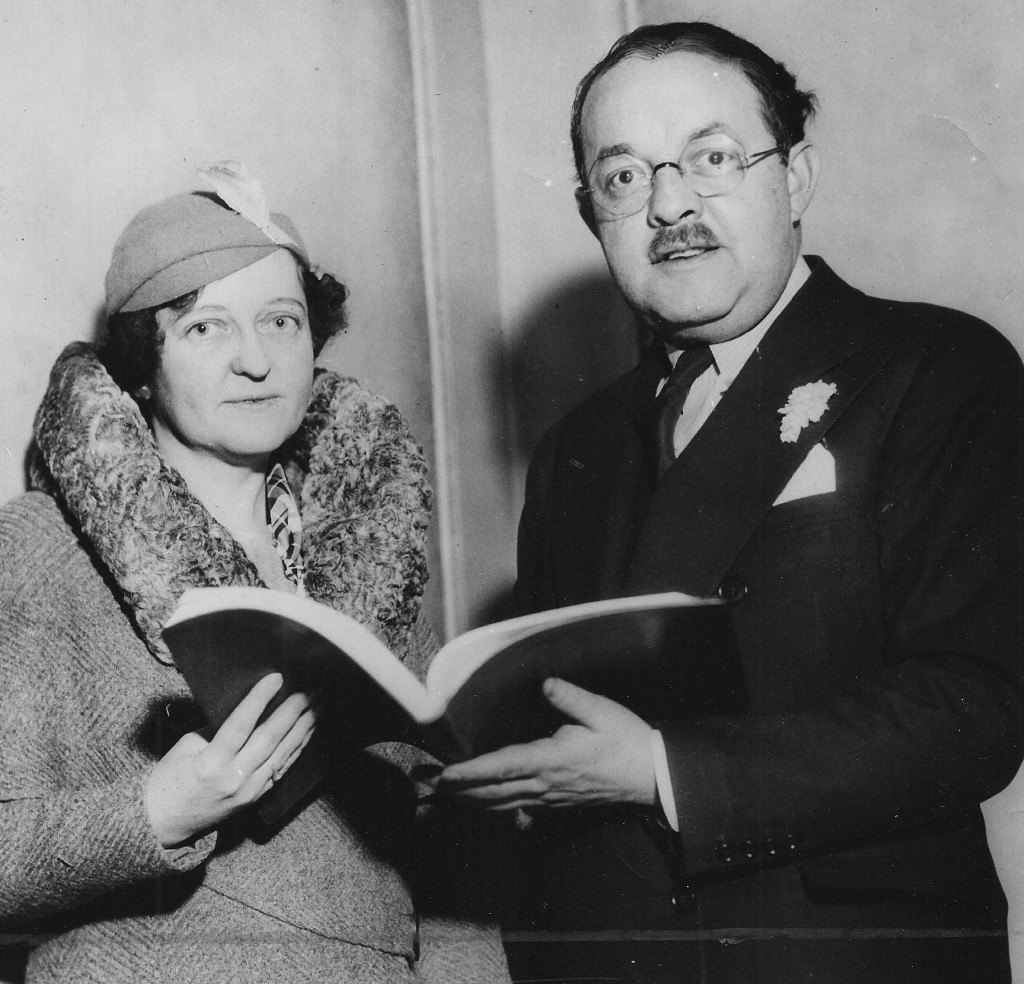 by Dana Polan
Most biographical details for Frances Taylor Patterson unfortunately are unknown, but she holds an important position in early American cinema history through her efforts on behalf of pedagogy. Specifically, Patterson was one of the earliest university lecturers on motion pictures. After the very first lecturer, Victor Freeburg, left for military service in 1917, Patterson took over his course on Photoplay Composition at Columbia University in New York and taught it over several decades. There has been some suggestion, as yet unconfirmed, that Patterson was Freeburg’s graduate student. She had gotten a Bachelor’s degree from Trinity College in Connecticut in 1914 and may have come to New York to pursue further studies.

Frances Taylor Patterson being presented with a copy of Robert Riskin’s Lady for a Day script by Jack Cohn. Private Collection.

Patterson’s efforts in the Photoplay Composition course led her to write two volumes on the art of screenplay writing, Cinema Craftsmanship (1920) and Scenario and Screen (1928), which served as textbooks for the course and which also included more general reflection on the aesthetics of film. The very fact that Cinema Craftsmanship went into a second edition one year after it was first published might suggest that the book had a larger appeal beyond the classroom. It is hard to know the extent to which Patterson’s pedagogy or writing had any direct impact on the motion picture industry and its films, but she did receive some support from the studios. For example, Paramount Pictures seems to have produced a pedagogical film about cinema techniques for her use, and her ongoing efforts in film pedagogy and film reform (she was an active and vocal member of the National Board of Review) brought her a certain regular attention in the trade press.

Photoplay Composition was the only course that Patterson taught, but she offered versions of it in a variety of contexts over the years. First, she taught it in Columbia’s Extension Program, which was an adult-education program. When Columbia subsequently began a home-study correspondence school, Patterson also offered a version of the course there. Columbia’s extension and home-study courses were noncredit offerings, and the purpose of such courses seemed to be either to offer vocational training or to provide cultural uplift and diversion. In a 1920 piece on the course in Photoplay magazine, Patterson described the range of her students as extending from would-be film-industry professionals to housewives and retirees looking to fill up leisure time, but it is difficult to know the extent to which the article was accurate or may simply have served as promotional advertising for the course.

Photoplay Composition addressed the mechanics of scriptwriting, but, even more importantly, it gave great attention to critical evaluation and the elaboration of principles of aesthetic judgment. As a way of agitating for an improvement in the quality of films, Patterson combined a pedagogy in photoplay writing with one in photoplay appreciation. She assumed a sort of feedback loop between screenwriting and screen viewing: an understanding of how photoplays were put together would improve quality, not only at the point of production, but also at that of consumption insofar as an audience aware of what could be done with the motion picture might demand higher quality motion pictures. Patterson felt that cinematic value came not only from moral or instructional content within the films, but also—and more importantly—from aesthetic qualities. She campaigned in her books as well as in her numerous articles for well-structured narratives and well-composed imagery in films. Consequently, she felt, the photoplay writer had to be a total filmmaker whose script would indicate the overall look and shape of the film. For Patterson, the writer, and not the director, was the guiding vision behind a film. Or, rather, at the extreme, she felt that the writer should also serve as director so that the original narrative design of the photoplay would not be betrayed in its translation into images. As she put it in Scenario and Screen: “The only solution is to have the author speak the screen language, so that he may deliver his own message and dispense with the services of an interpreter…The ideal is to have the author and director one, as King Vidor has been, as Monta Bell has been, and as Tod Browning has been” (126).

From Freeburg, Patterson had inherited a notion of photoplay composition as having to do not just with the story within a film, but with all of its aspects, both visual and narrative. Unlike Freeburg, however, whose tastes tended to be very conservative, Patterson was quite open to modernist experimentation (as long as it represented total planning of the overall look and feel of the film) and championed such works as Sergei Eisenstein’s Battleship Potemkin (1924) or Robert Wiene’s Cabinet of Dr. Caligari (1921). Given her call for the photoplay writer to be a film’s veritable auteur and overall composer, it is ironic that Patterson’s one produced screenplay, Broken Hearts from 1926 (now lost), was an adaptation of a Yiddish drama that was heavily monitored by the film’s producer-director-star. For all her call for more power to the screenwriter, Patterson herself seemed to have little power within the motion picture business. To be sure, in her 1928 manual, Scenario and Screen, Patterson had called for women to assert their own voices and concerns in film. Arguing that women had inherited social roles from men, she announced that “Women are throwing off their man-given character cloak…. The new freedom allows them to break the yardstick of tradition and take their own measure” (29). But her teaching career seemed designed to show that the most effective intervention in the art of cinema would come not so much in film production but in film appreciation and pedagogy. Ironically, if so little is known about her today, this is due in large part to her very publicly responsive desire to teach in adult-education and outreach programs that fell below the radar of university administrators and were rarely recognized as important by chroniclers of university history.

Polan, Dana. Scenes of Instruction: The Beginnings of the U.S. Study of Film. Berkeley: University of California Press, 2007.