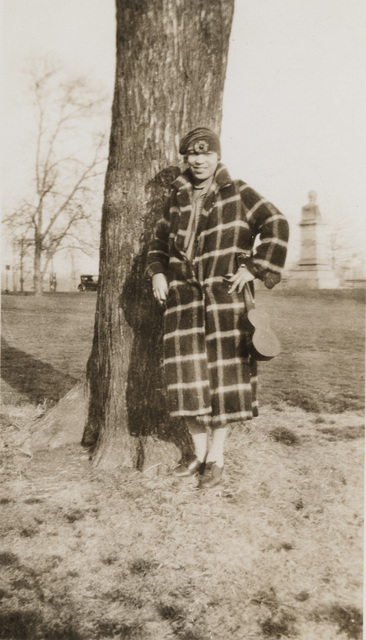 Better known for her work as a novelist, Zora Neale Hurston could be, according to an essay by Gloria Gibson, the first African-American woman filmmaker. The film footage, which includes Children’s Games (1928), Logging (1928), and Baptism (1929), appears to be from her work as a student of anthropology under the tutelage of famed anthropologist, professor and mentor, Dr. Franz Boas. A graduate of Barnard College and a Guggenheim fellow, Hurston traveled to back to a South similar to her hometown of Eatonville, Florida to capture a variety of short takes of African-American life. Ethnographic in nature, the films reflect a focus of folklorists of that time period who believed that “…cultural performance and beliefs must be expeditiously collected and documented because they would soon be gone forever” (Gibson, 205).

While these films are considered by Gibson to most likely be an element of her research on folklore of African-Americans, Hurston was also a playwright. Her prize-winning 1925 play “Color Struck”  attracted the attention of members of the Harlem Renaissance. That project along with other dramatic works by Hurston led to a collaborative project with Langston Hughes.  The 1930 play “Mule Bone” could be seen as  reflecting Hurston’s  concern with “authenticity” that at least one critic has attributed to her training as an anthropologist (Carson, 123). Finally, a footnote in Antonia Lant’s Red Velvet Seat tells us that Hurston  worked as screenwriter and novelist Fannie Hurst’s personal assistant from 1925-26 and went on to a job as  a staff screenwriter at Paramount Studios in 1941 (795).  Hurston, looking back, wrote about her relationship to the novelist four years after the 1933 publication of Hurst’s famous passing novel Imitation of Life.