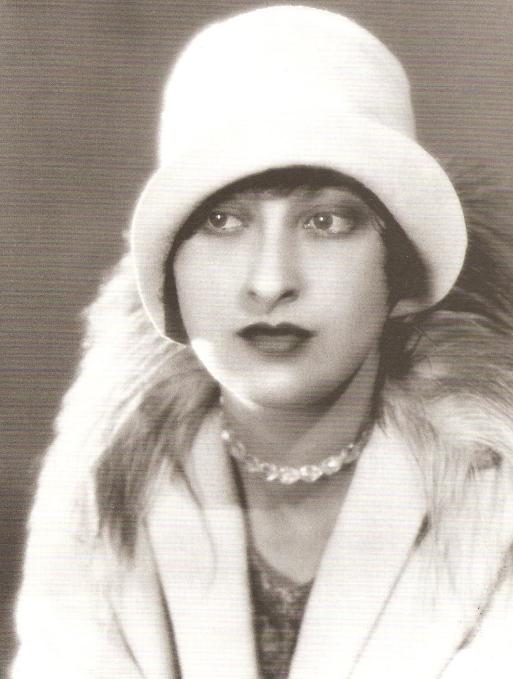 A gifted and sensitive photographer, Ruth Harriet Louise worked for less than ten years in her chosen profession, running her own studio for three years in New Jersey before serving as Metro-Goldwyn-Mayer’s head portrait photographer from 1925-1929. Today, photographers and scholars alike study her work, which skillfully captured the character as well as the beauty of her famous clients, encapsulating her theory “that every portrait should just as a motion picture does, tell a story, reveal a character or interpret a mood” (Tildesley). Attention to Louise’s career, however, is a fairly recent phenomenon; at the time of her death in 1940, Louise and her work were largely forgotten. 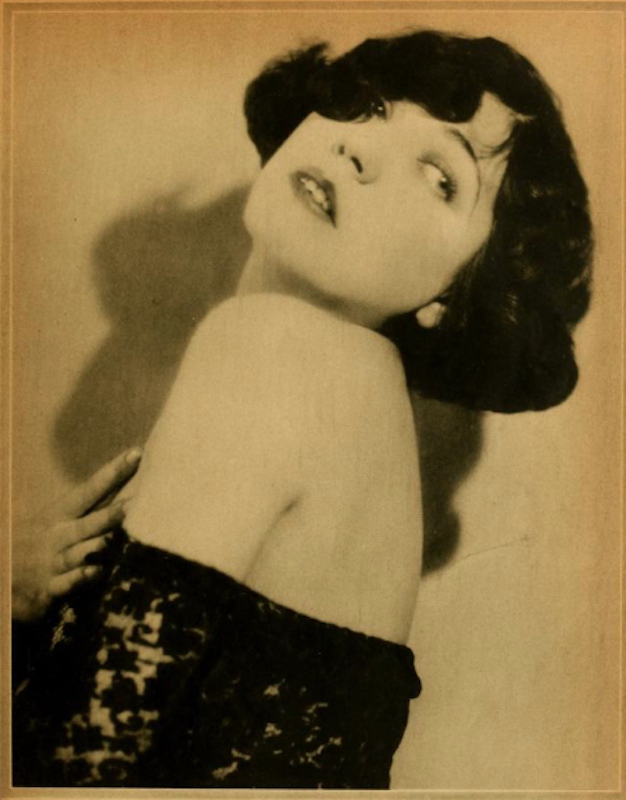 Born Ruth Harriet Louise Goldstein on January 13, 1903, to Rabbi Jacob Goldstein and his wife Klara Jacobsen Goldstein, Louise grew up in New Jersey in the shadow of her older brother Mark, who would later achieve Hollywood fame under the name Mark Sandrich as the director of many Fred Astaire-Ginger Rogers musicals. According to The Dayton Herald, her mother pushed Ruth into portrait painting as a substitute for pursuing her own dreams in the discipline. Louise reportedly studied painting and drawing with artist Miles Evergood while also attending art schools. Talented in composition, she, however, discerned no great visionary skills in her painting (“Girl Turns Early Failure to Success”).

Recognizing her composition skills were better suited for the creation of photographs from light and shadow rather than the painting of landscapes or still lifes, Louise switched her ambitions to the new field after meeting and studying with renowned New York portrait photographer Nickolas Muray. As the same Dayton Herald article recounted, she dedicated herself to this new subject, studying at the Wolf-Miller School in New York before apprenticing with Muray. She quickly realized that, ‘To be successful in anything, a woman must give herself to it completely” (“Girl Turns Early Failure to Success”). 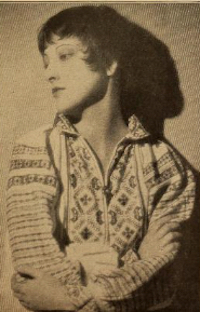 Ambitious and driven, Louise opened her own studio in Montalvo’s Temple of Music at 101 Albany Street in New Brunswick, New Jersey, in November 1922. She advertised the studio in The Central New Jersey Home News, promising “Photographs That Are Different.” Fighting for respect and attention in a male-dominated field, Louise heavily promoted herself in newspaper blurbs and through word-of-mouth, shooting portraits of local citizens that sometimes appeared in newspaper society columns. It was also at this time that she began using the name “Ruth Harriet Louise” professionally. 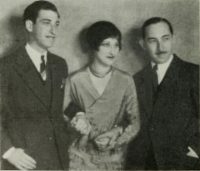 Louise focused her attention on Hollywood as early as 1923. Her cousin, motion picture actress Carmel Myers, offered a boost to her career, allowing Louise to shoot portraits of her in New York that spring. Louise ventured West in the fall of 1924, spending several months with her mother visiting her brother in Hollywood. At the end of that trip, The Central New Jersey Home News reported that Louise remained behind “for an extended stay to do special photographing…” (“Personals”).

The twenty-two-year-old officially moved to California in 1925 to focus on portraiture. One source reported that Louise rented a studio on Vine Street in Hollywood in which to work (Dance and Robertson 66) while The Central New Jersey Home News announced that she was “engaged in portrait photography at the Hollywood studio of the Fox Film Corporation, where her brother Mark Rex Sandrich… is director” (“Dr. Goldstein”). Given that Louise herself was probably giving the New Jersey paper its information, it is very likely correct; however, I have not yet found any other evidence to support either source’s claim. While it remains unclear whether or not Louise worked at Fox, we do know that she was soon employed at MGM after cousin Myers presented some of her portraits to studio head Louis B. Mayer. Impressed with her work, Mayer set up a test, which led to an interview, with the studio ultimately hiring Louise in the summer of 1925 (Dance and Robertson 67). With this hire, Louise became the first full-time female portrait photographer at any Hollywood studio. That September, Louise’s first Hollywood portraits—images of Hungarian actress Vilma Bánky in the Samuel Goldwyn picture Dark Angel (1925)—appeared in Photoplay. 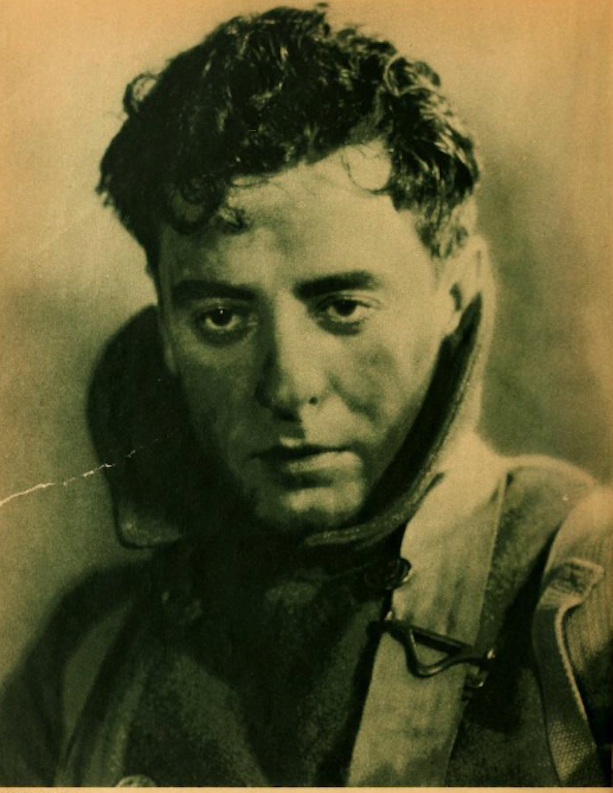 Portraiture played a critical part in the film publicity ecosystem, selling films and stars to the general public. Portraits served as key art, newspaper and magazine illustrations, and fan give-aways. They shaped star images and personas, crafting an iconography of sensuality and glamour associated with the motion picture medium. Studios produced millions of photographs each year, sending them en masse to hundreds of magazines and newspapers desperate for illustrative product in a quid pro quo system of free usage in exchange for credit. Though a vital component of Hollywood public relations, still photographers received little to no recognition or publicity for their own work. Some earned occasional mentions in trade journals or magazines, but most simply saw their last names appear in print as a credit alongside their photographic work. 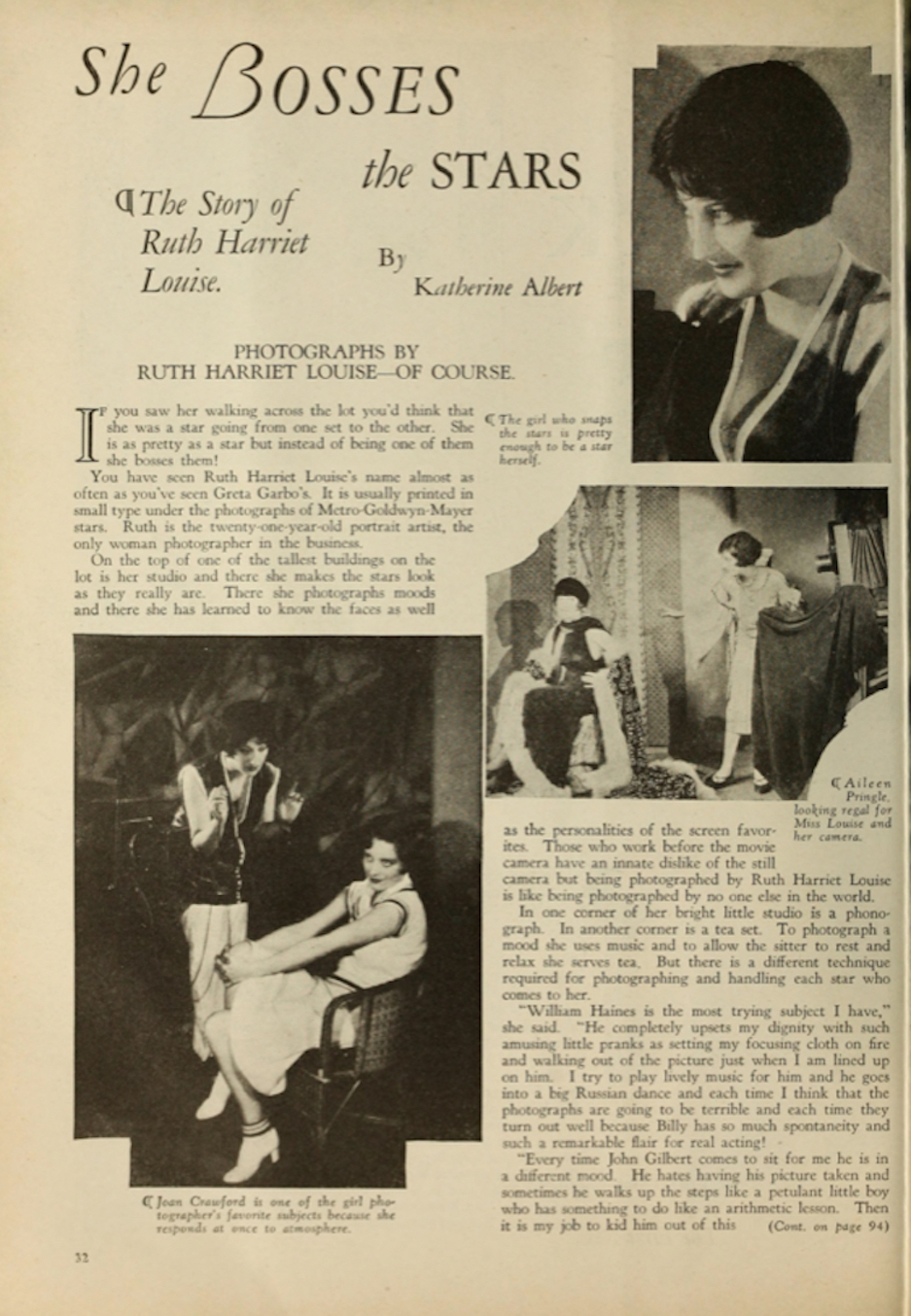 “She Bosses the Stars: The Story of Ruth Harriet Louise,” Screenland (September 1928). 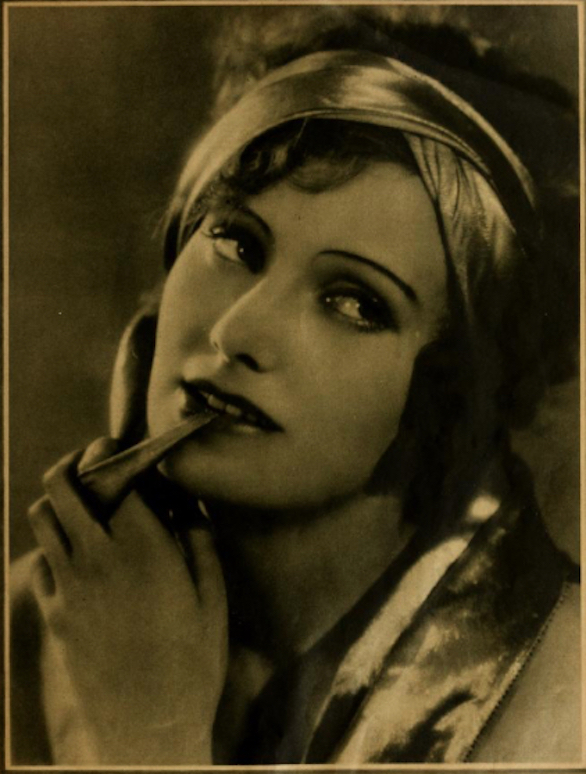 Louise, however, received credit for all her work, stamping “Ruth Harriet Louise” on the back of each print. As MGM’s head portrait photographer, she scheduled five to six sessions a day, six days a week. From her private studio atop the editing building on the MGM lot, Louise created indelible images of the studio’s stable of stars, including John Gilbert, Greta Garbo, Norma Shearer, and many others.

MGM stars loved the friendly, energetic Louise, who engaged her subjects in discussions regarding art, music, and books in order to put them at ease. According to The Washington D.C. Standard, music played a major role in her work:

Miss Louise is unique among motion picture portrait photographers not only because she is a woman, but also because of her methods and the results she has achieved with them. She leans heavily on music in photographing screen celebrities, choosing phonograph records for each sitting as gracefully as she changes her lights and shadows. Intelligently selected music, she explains, helps the subject to relax and drift into a mood that will make the portrait more interesting. (“Schwab Hard Movie Subject”)

Louise mainly employed diffused lighting for her portraits, giving them a romantic sheen that added a sense of beauty and glamour. Unlike most studio photographers, she shot full body portraits with her large format camera, working with her assistant, Al St. Hilaire, to blow them up and then crop them to close-ups before careful retouching was done by Andrew Korf (Dance and Robertson 81-82). 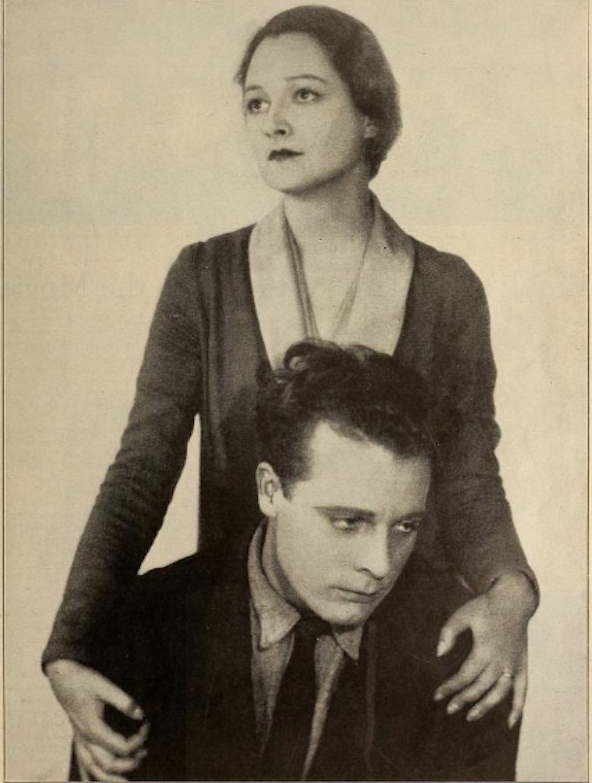 Louise’s departure from the film industry in 1929 reflected a broader phenomenon taking place in the 1920s as the American film industry moved to more controlled assembly line systems of production and then to the corporate studio system. Thanks to Wall Street money, management and work structures became strictly centralized with hierarchies of authority that were “characterized by a massive vertical and horizontal integration for economy of scale… ” (Bordwell, Staiger, and Thompson 309). While, earlier, studios had welcomed women’s contributions throughout the entire creative and production process, these new monopolies forced many women out as businessmen took even more control. 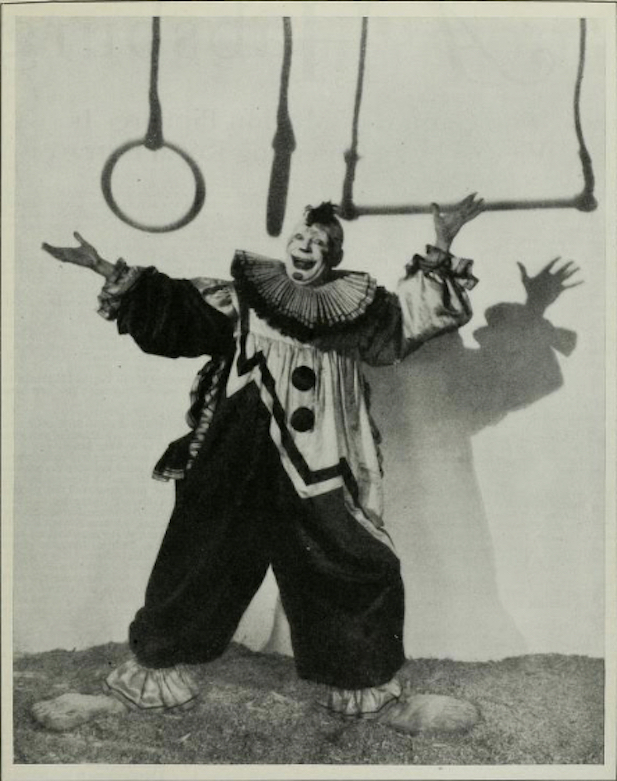 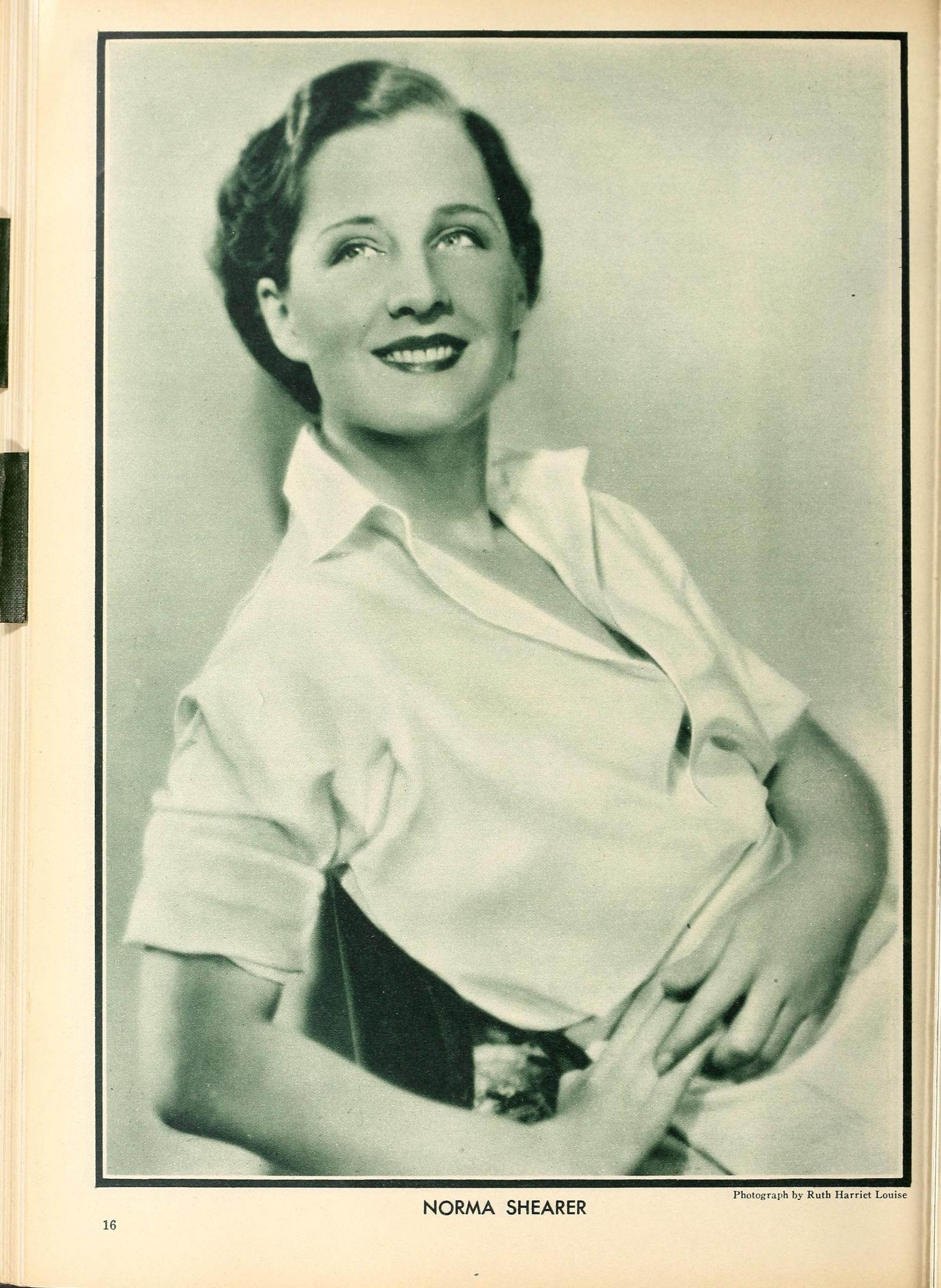 In Louise’s case, the changing work environment proved difficult. On the one hand, calls to form unions grew louder in the late 1920s as corporations muzzled employees to maintain discipline, control, and salaries. Specialized workers organized to demand more rights, higher wages, and better working conditions for their members (Bordwell, Staiger, and Thompson 311). Studio photographers themselves formed Local 659 in August 1928 to protect their work (Dance and Robertson 221). However, Louise chose to remain independent and refused to join. At the same time, work relationships began changing, as studios evolved from a tight, family-like atmosphere into that of a more impersonal factory and conglomerate. Growing hostility towards female employees and Louise’s refusal to join the union led to further challenges for the photographer, especially as actors began to seek out new opportunities. For example, Norma Shearer, one of MGM’s top stars and the wife of studio production chief Irving Thalberg, recognized that the coming of sound films offered the chance for her to play more challenging parts. On the advice of colleague Ramon Novarro, she visited the personal studio of photographer George Hurrell, who captured a sexy, uninhibited side of the star that was absent in Louise’s portraits of her (Dance and Robertson 219). When Variety reported Louise’s resignation from MGM, in December 1929, Hurrell was named as her replacement (“Hollywood and Los Angeles”). 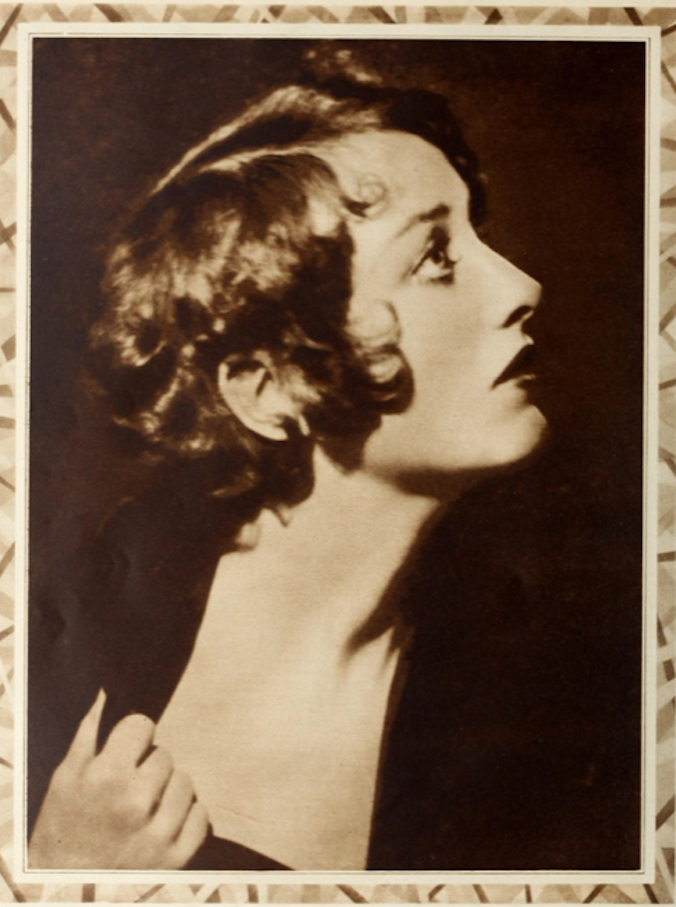 While Louise found occasional freelance work shooting portraits after leaving MGM, her career slowly petered out. She devoted herself to caring for her husband and family. Married to film director Leigh Jason (Leon Jacobson) in 1927, she gave birth to two children: a son, who died in 1938 of leukemia; and a daughter, born in 1936. Louise died from complications of childbirth on October 12, 1940. She was listed as Mrs. Ruth Jason in most obituaries. When her brother donated two bungalows to the Motion Picture Country Home in 1942 in honor of his sister, The Film Daily called her “one of the country’s foremost portrait photographers…” (Wilk).

Tildesley, Alice. “Secrets About Famous: Inside Facts About the Personalities of Cinema Favorites Revealed by One in a Position to Observe Them at Close Range and to Reveal Intimately the Side of Their Natures Not Disclosed on Screen.” The Miami Herald (25 July 1926): 56.