Renée Deliot is best known as Mario Guaita’s screenwriter and wife. She collaborated exclusively with her husband, an actor and director best known as a strongman of the Italian silent cinema, in the style of Maciste. Deliot’s role, however, was nonetheless central and much more important than film scholarship has revealed to date. Notably, Deliot and Guaita’s relationship, which lasted thirty-seven years, was both a professional partnership and a love affair, even if they only were married toward the end of their life together, in 1955. 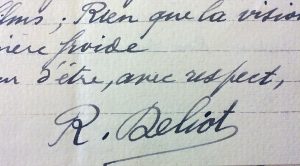 Based on existing birth and marriage certificates currently held in France at the Archives de Paris and Mairie de Marseille (City Hall), Renée Felicie Deliot was born in Paris in 1881. Her mother, Annette Berger, died when Deliot was still a child. Her father, Joseph Deliot, remarried in 1886 for the third time. In 1897, at the young age of sixteen, Deliot got married for the first time to Felix Leon Ligot, who was ten years her senior. On the marriage certificate, she declared herself an “embroiderer,” while her husband is identified as a “designer.” No further information is available about the years of Deliot’s first marriage, nor about her first husband. One theory suggests that he may have died in World War I. 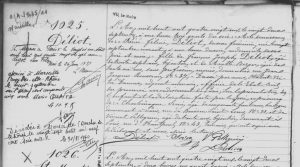 Evidence shows that Deliot met Guaita in 1919 and they started working together that same year. Guaita had become very famous in the 1910s when, as a member of the Trio Ausonia, he appeared in athletic performances and in tableaux vivants based on renowned paintings and sculptures. In 1912, he started to act for the cinema under the alias “Ausonia.” 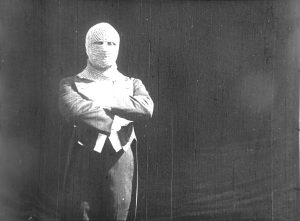 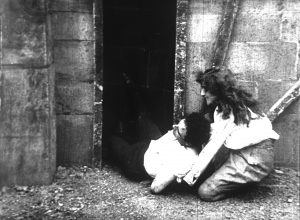 Deliot’s screenwriting work began for the De Giglio production house in Turin, Italy. Her first completed film was L’atleta fantasma (1919). Despite this being her first scenario, she demonstrated a definite personal style and complete mastery of the techniques and tools of cinematic storytelling through the use of dialogue, plot twists, filmic tricks, and more. L’atleta fantasma is a spy story, in which a band of criminals is involved in the trafficking of stolen jewels. Ausonia plays Harry Auderson, a gentleman who leads a double life as a masked hero who protects the weak (at the beginning of the film we see him catch a thief who attacked a man in the street). Harry is engaged to Jenny Ladimoor, a young woman of wealthy descent, who is ignorant of his double life, but madly in love with the masked hero’s deeds. She dreams of living an equally adventurous life. Harry, however, when not fighting criminals, behaves in a shy manner in order to avoid being discovered. Committed to defend a precious medallion against various attempts of theft, his phantom athlete collides with the criminal gang headed by a shady individual nicknamed “the Professor.” In order to create suspense, the film makes frequent use of motifs such as a listening ear, and a hand writing notes in a notebook, as well as espionage gadgets. The camera often does not show Ausonia’s face, but rather parts of his body, such as his hands touching his top hat or mask (both symbols of his character). 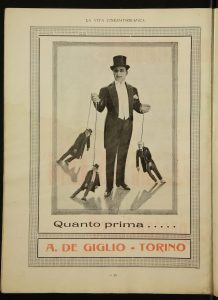 In this script, and Deliot’s others, she improved Ausonia’s character by making him more sophisticated. From L’atleta fantasma onward, Ausonia’s films exhibit qualities typical of the serialized novel, with adventurous plots, espionage, bourgeois drama, tropes from grand guignol, and mysterious and transformational characters, fitting within a larger tradition of the doppelgänger motif. Deliot wrote many adventures, drawing inspiration from everything from popular narratives and high literature to front-page news and stage melodramas. In every story, Ausonia’s strength and muscular body are in the spotlight as Deliot continually highlights his athletic prowess. Almost all of her films reach their climax when Ausonia confronts the villain. In these sequences, his strong body is shown lifting a heavy weight, breaking a chain open with just his bare hands, or climbing up something by holding a rope with this teeth.

Beyond his physicality, Ausonia’s characters, as written by Deliot, present him as a modern hero, individualistic and bourgeois. His actions are spurred by a personal principle for justice, defending the weak, but also his own interests, and delivering criminals to justice, but also operating outside of the law. Often, he works on his own (e.g., Mes p’tits [1923] and Dans les mansardes de Paris [1924]) or with the help of chosen collaborators (e.g., L’atleta fantasma and Gli spettri della fattoria [1923]). Deliot continually presents Ausonia’s character as a sturdy gentleman, handsome and good-hearted, a sort of superman ante-litteram, with similarities to characters like Arsène Lupin and Fantômas. It is worth noting too that Deliot’s female characters show physical strength as well, and are often modern and dynamic, playing active roles alongside Ausonia. An analysis of the films that have been preserved, and of contemporary advertisements, shows how Ausonia in time became a brand name mainly by virtue of Deliot’s scripts. Yet, she has been largely forgotten in cinema history. 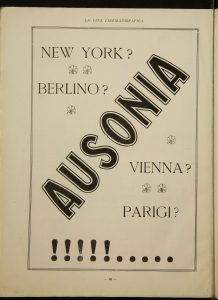 Deliot is featured, however, in various reviews of the time, the most important being a 1923 article in La Rivista Cinematografica entitled “La Buona Fata d’un Grande Attore,” which translates to “The Good Fairy of a Great Actor.” In this article, Deliot is portrayed as “the angel of the hearth” (Morozzoni 57) who devoted her life to supporting the career of Ausonia–here wrongly described as her husband so as to conform to the cultural standards of propriety of the time–writing stories for him while never neglecting the housework. The articles describes her as follows:

Modest, working in the shadow of the great star, inspired by her love for him, she wrote one after another: L’atleta fantasma, Il figlio di Ercole, La cintura delle Amazzoni, Atlas, La nave dei miliardi, Sotto i ponti di Parigi, an adaptation of the Balzac novel, Il fantasma d’acciaio, Frisson, Il pescatore di perle, I fantasmi della fattoria, and a film that will come out next winter, I miei piccoli e la corsa all’amore by Paul Barlatier (Morozzoni 57). 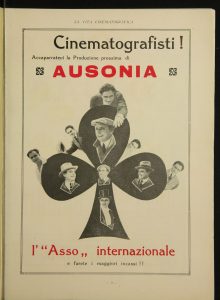 The tone of the article is decidedly dismissive of Deliot’s talent as separate from her husband’s work, and the content features a few errors. For example, it is incorrect to state that Sotto i ponti di Parigi (1921), directed by Guaita, is an adaptation of Balzac’s novel of the same name, when the film is actually an adaptation of Ferragus (1833), the first short novel in the trilogy Histoire des Treize from Balzac’s La Comédie humaine (1829-1859). Essentially, it becomes clear that the author of the article considers Deliot’s achievements significant only in so far as they contribute to Ausonia’s success:

Despite the fact that she lived in Turin, she would always travel with her husband in all his journeys and would help him insofar as her intelligence and her good heart would allow it.  Ausonia directs most of the works he acts in; M.me Renée de Liot is always by his side, ready to offer her observations as a writer and as an artist, thus accomplishing the necessary bond between the technical and the spiritual in developing the subject (Morozzoni 57).

Although crediting Deliot with the scriptwriting, the author of the article still considers her greatest role that of supportive wife. However, she perhaps did a good deal more on set, an assessment that Italian film history has repeatedly overlooked. According to Vittorio Martinelli and Mario Quargnolo:

According to the cameraman Fiorio, who worked with Guaita in France, it was the wife, the not very attractive Felicie, who wrote the subjects and took part in directing the films. She was a very good-natured and patient lady, who always put up with her husband’s whims and tantrums (37).

Future research must address the significant and complex ways that Deliot, in addition to screenwriting, may have shaped her cinematic collaborations.

Only one of Deliot’s scripts still survives. The screenplay for Atlas (1920) is preserved at the National Cinema Museum of Turin. Fortunately, many of her films are preserved in various archives around the world and give us access to Deliot’s corpus. Deliot and Ausonia’s overall film production work may seem frenetic; in less than four years they released over ten films, among which are L’atleta fantasma, Lotte di giganti (1919), Atlas, La cintura della Amazzoni (1920), Sotto i ponti di Parigi, La mascotte di Sparta (1922), La nave dei miliardi (1922), Frisson (1922), Gli spettri della fattoria, and Il pescatore di perle (1923). 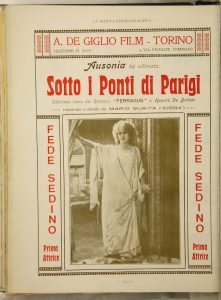 Deliot and Ausonia worked in Italy until 1923 and then moved to Marseille, France, presumably because the Fascist regime did not favor stories like the ones that they produced, in which foreign names were used. According to a 2001 issue of the periodical 1895, at the time of the couple’s move, one headline read: “Suspected of vulgar Parisianism, Mario Guaita and Renée de Liot leave Italy for Marseille” (Albera and Gili 223). In Marseille, Deliot set up a production and distribution company, Ausonia Film, in order to sell their films and produce new ones. The couple also collaborated with Lauréa Film, under the direction of Paul Barlatier. As with their Italian period, the couple worked very hard in France, producing many films in just a few years. These included: Mes p’tits, La Course à l’amour (1923), Dans les mansardes de Paris, Follie d’atleta (1926), and La donna carnefice nel paese dell’oro (1926). Deliot wrote the screenplays for all of these films. 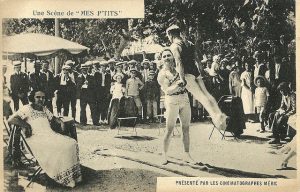 In 1926, Deliot applied to the Marseille city council for permission to store films in her own house, presenting a project for a storehouse. She may have been trying to increase her distribution activity. After 1926 Guaita stopped acting and Deliot stopped writing as well. According to Martinelli and Quargnolo, they managed and ran a movie theater in Marseille for some time (37). Guaita died in 1956, just one year after he and Deliot were married in Marseille. He had just been left a widower when his first wife Ersilia Amorosi, a café-chantant singer from whom he had been separated since 1911, died. Deliot died in Marseille four years later, on August 27, 1960. On her death certificate, she is listed as “without profession.”

There are some date discrepancies in terms of films like Mes p'tits, Il pescatore di perle, and La course à l’amour. These discrepancies most likely arise as a result of gaps between production and distribution. More research is required to investigate these dating inconsistencies.

It is likely that La nave dei miliardi is the second half of the non-extant Atlas. Based on viewing the former and the extant screenplay for the latter, we can confirm that both films share the same character names and plot.

More research must be done on another title, currently omitted from this filmography: Il fantasma d'acciaio (year unknown). There is no information on this likely non-extant film, except for one mention in a newspaper from 1923.

For many years, Deliot’s name appeared as “de Liot,” a transcription taken directly from the reviews and journals of the time. However, records recently discovered in French archives, in which her original signature appears, revealed that the faithful transcription of her name is indeed “Deliot.”