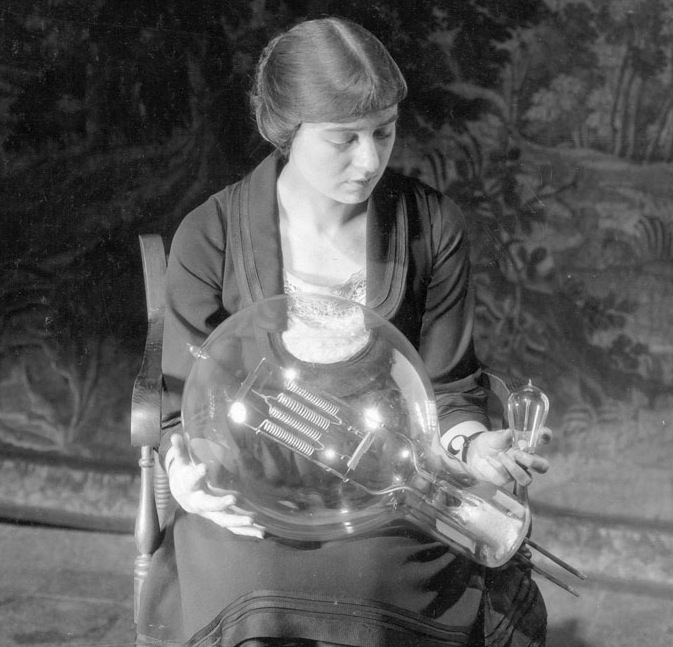 by Vicky Jackson
A previous version of this material can be accessed at https://doi.org/10.7916/d8-frvz-e959

Maude Adams was a hugely successful American stage actress of the late nineteenth and early twentieth centuries. She was perhaps most famous for her performance as Peter Pan. Whilst she never appeared on screen she nevertheless made a significant contribution to the film industry through research she coordinated into lighting technology and color cinematography during the 1920s. Notoriously private, Adams gave few interviews and few personal papers survive. As a result, her own thoughts on her work remain elusive and, for the most part, this research has relied on film trade journals, newspaper reports, and previous biographies. 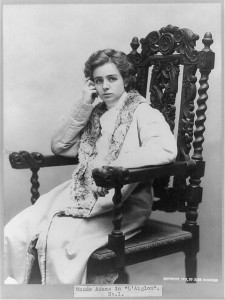 Maude Adams in play “L’Aiglon.” Courtesy of the Library of Congress.

During her theatrical career, Adams became interested in stage production and in particular stage lighting technology and design and came to work closely with technicians and engineers on her productions. Her most significant collaboration was with Bassett Jones, an electrical and lighting engineer consultant, who she worked with between approximately 1905 and 1915. Together they developed and modified incandescent electrical lighting for the theater. Incandescent lighting had been developed during the nineteenth century and used filament wire heated to a high temperature by an electric current until it glowed to produce light. However, existing lights were too weak and unwieldy for the theater. Adams and Jones’ research made its use in the theater practicable by making incandescent lighting stronger, smaller, and more mobile.

Adams’ experience in stage productions allowed her to identify problems and opportunities to improve stage lighting, which helped direct the research of technicians such as Jones. In addition, she helped to develop ways to implement new technologies and techniques for the stage. For example, in the case of incandescent lighting, Adams was also credited in The New York Times in 1908 with coordinating research into the development of a light bridge, which held seven incandescent spotlights that could be used during a performance (“Maude Adams Invents”). She also helped to develop many novel lighting effects in her productions.

After retiring from the theater in 1919, Adams returned to her research in electric lighting. She was interested in incandescent lighting’s further application to the theater but also in its possibilities for motion picture production (Robbins 201-13). Adams established and funded her own research team to investigate the possibilities of developing stronger incandescent lighting. Although Adams herself was not present at all times, she managed the direction of her team’s work and visited them regularly (Fields 262). So promising was their research that they were able to form collaborations with General Electric, who had recently developed tungsten filaments bulbs, and Eastman Kodak, who were interested in Adams’ lights and their potential use with their new color system Kodachrome (Fields 263).

The result of her research and collaborations with General Electric and Eastman Kodak was the manufacturing of the world’s then-largest incandescent lamp in 1922. The lamp used a tungsten filament and was eighteen-and-a-half inches high with a bulb that was twelve inches in diameter. It required 30,000 watts to operate and emitted 60,000 candlepower of illumination (Fields 264). Despite Adams’ contribution, she did not feature in any of General Electric’s incandescent lighting patents and received no financial reward for her work. Her name is also largely missing from General Electric’s official accounts and surviving archive (Hanson 72; Fields 262). 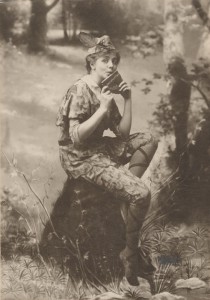 Although Adams never appeared on screen, she did contemplate entering the production field during the 1920s. She planned to produce several titles, all in color, including Aladdin and Peter Pan for which she was anxious to perform on screen. She also purchased the film rights for Kim from Rudyard Kipling in 1923 with the agreement it must be shot in color, in India. Whilst Adams experimented with a number of color processes using her lamps, she ultimately failed to find one that would satisfactorily produce the films in color (Robbins 201-213). Through the decade she continued to experiment, establishing Maude Adams Productions in 1924 and in 1926 participating in color film experiments with Kodachrome, this time through another collaboration with the filmmaker Robert J. Flaherty. Together they reportedly produced test films featuring pottery and stained glass windows at the Metropolitan Museum of Art, according to Film Daily in 1926 (1-2). However, the museum has no records of these films being produced. 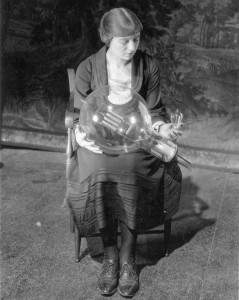 Maude Adams with incandescent lamps, 1922. Courtesy of the Museum of Innovation and Science.

When it became clear to Adams that she would be unable to produce films in color she chose to abandon these projects rather than complete them in black and white. For Adams, the absence of color and sound was a flaw of the medium. In a letter to J.M. Barrie dated October 13, 1920, regarding her preparations for filming Peter Pan, she stated she was prepared to try a few scenes in black and white, but later in the same letter she wrote:

The only pictures I have seen in black and white have been rather cheap—a cheap sensationalism. Without color and sound there is little to appeal to the emotions and the repeated attempts to create sensations become rather monotonous. (qtd. in Robbins 203-4)

Clearly placing great importance on color’s ability to influence the emotional response of the audience, she reflected the ideas of the new stagecraft movement in theater production in the United States, which were moving stage production away from realism and towards suggestion using visual aids of which color was an essential tool. 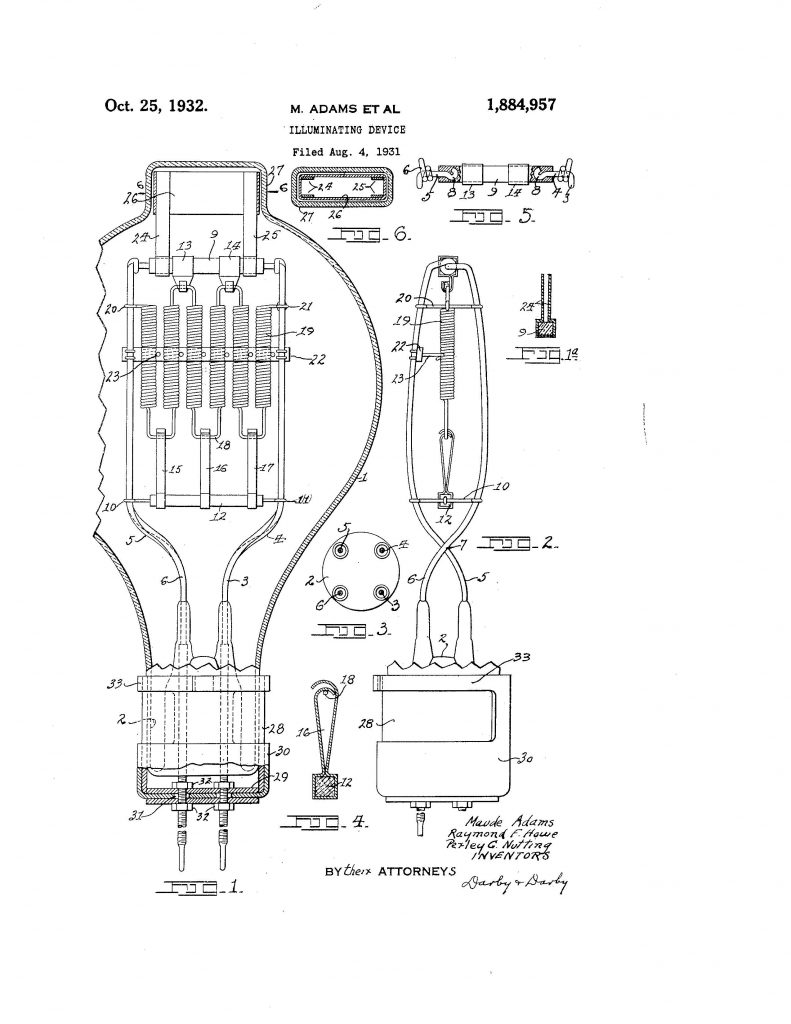 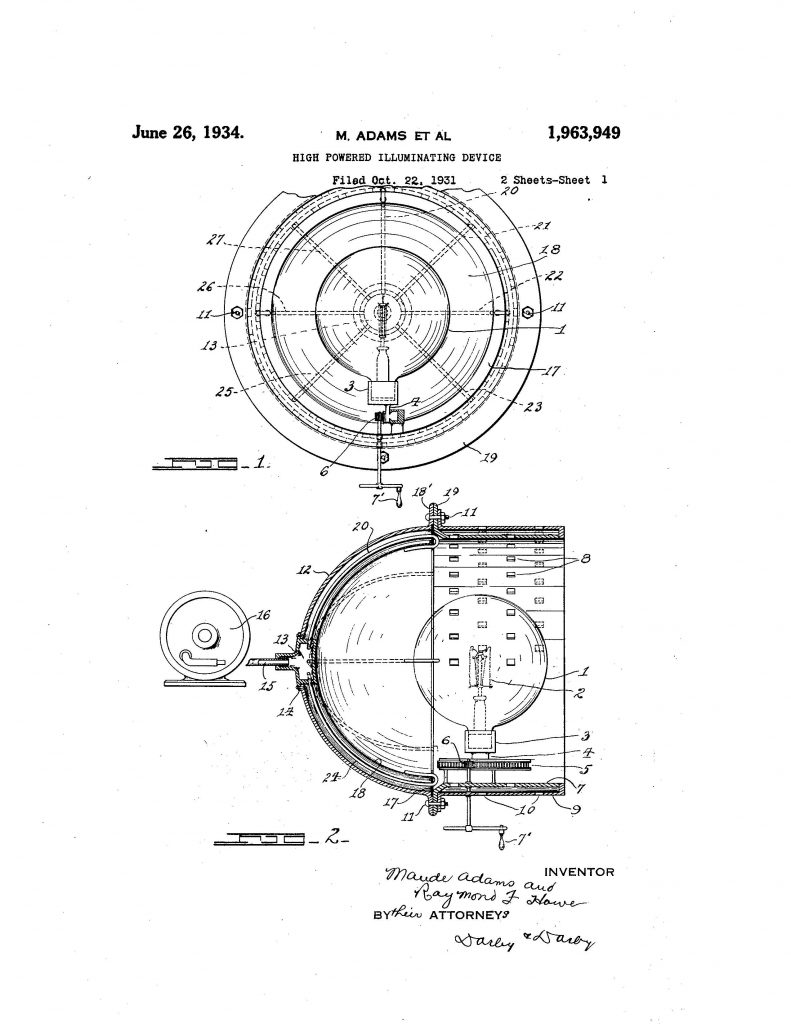 While Adams’ name did not appear in patents connected to General Electric in the 1920s, she did feature in four patents relating to high powered incandescent lighting submitted between 1931 and 1932. In three of the patents she was listed as a co-inventor (and as the primary, or first, inventor), along with Raymond Francis Howe and Perley Gilman Nutting. Nutting had worked with Adams at General Electric on her experiments in the mid-1920s (“Incandescent Studio Lights Tested”). Her patents were for a method for supporting the filament so that the lamp could be tilted (Adams et al. 1935); a support for the filament to make it efficient and rugged in construction (Adams et al. 1932); and a method for cooling a high-powered lamp (Adams and Howe 1934). 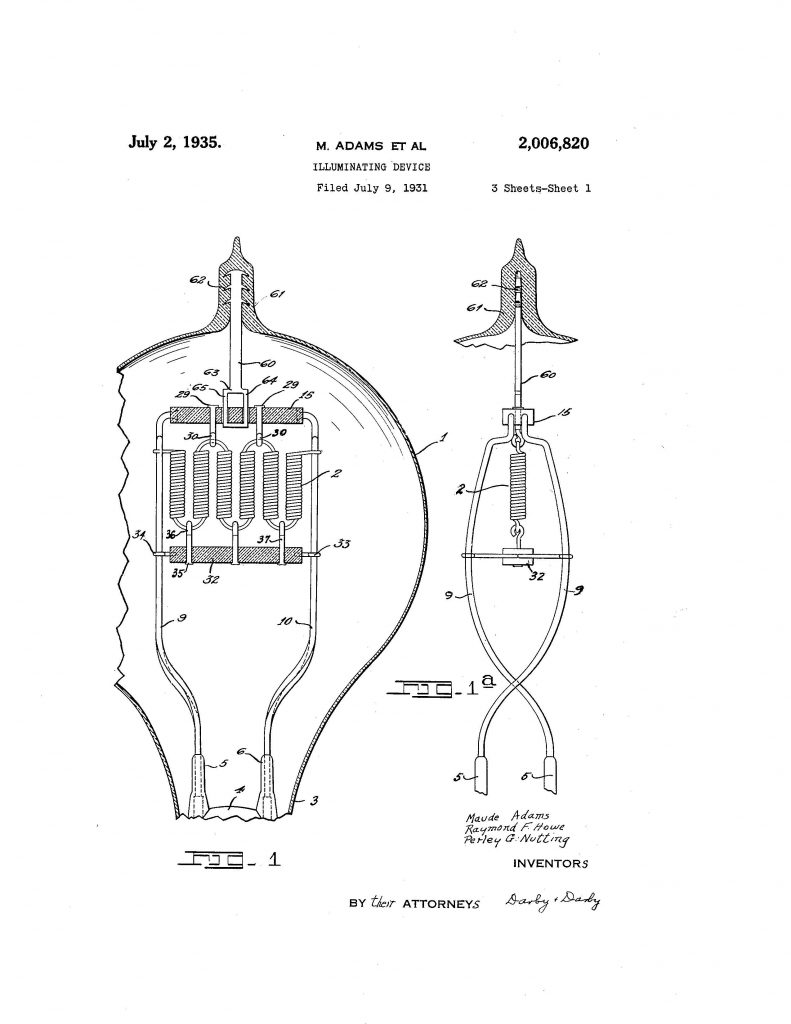 I have found no reference in biographies or contemporary press articles to Adams returning to her research in the 1930s. It is, therefore, difficult to say for certain if Adams embarked on a new period of research or work originating from the 1920s was finally patented. Nonetheless, the existence of these patents only serves to prove she played a significant part in these inventions. Adams may not have been a traditionally-trained engineer, but she did have, as Phyllis Robbins described it, “a mechanical bent” (201). Alongside her unquestionable technical knowledge, she had an excellent understanding of the challenges in lighting stage productions and color cinematography. This in-depth knowledge helped her to shape the research agenda she collaborated on, ensuring it addressed the key problems in those areas.

What is also particularly striking about Adams’ work is her collaborative approach. She was fortunate in this respect that her stage career provided her with influence, money, and a reputation for working on technical innovation. This meant large corporations such as General Electric were more willing to listen to her ideas and to then realize their potential, which enabled her to employ highly-skilled engineers to conduct research for her.

Following her experiments with lighting and film production, Adams returned briefly to the stage in 1931 before becoming a professor of dramatic art at Stephens College in 1937. She retired from the college in the winter of 1949-1950 and died in 1953, aged eighty. Writing after her death, Bassett Jones said of her: “she completely revamped the whole art of stagecraft—setting and lighting…In my opinion, Maude Adams was the greatest production artist this country ever saw” (qtd. in Flinchum n.p.).

“Maude Adams Invents Stage Lighting Device; Her Novel Theory of Stage Illumination Developed from a Hobby and Now for the First Time to Be Put to Practical Use.” The New York Times (5 Jan. 1908): 108.