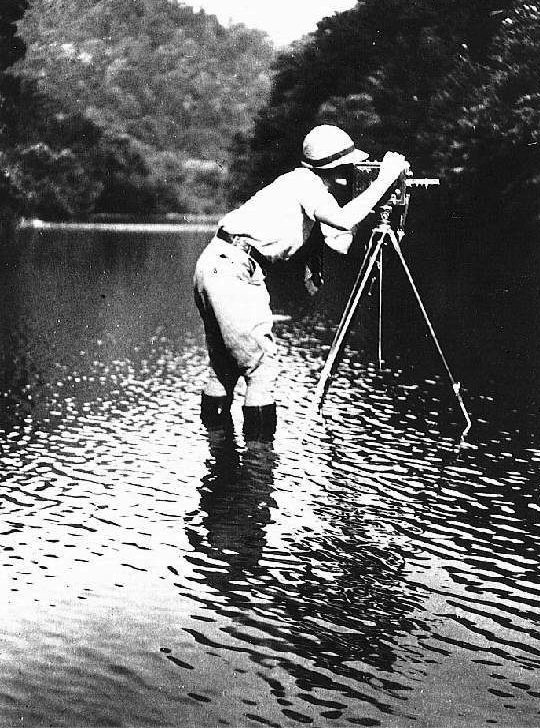 Marvin Breckinridge was an amateur filmmaker, best known for her 1930 silent film The Forgotten Frontier. This film presents the activities of the Frontier Nursing Service, a group (primarily women) that provided medical services in remote and rural areas of Kentucky. While the film was named to the National Film Registry in 1996, its position as an amateur production, a late silent film, and documentary made outside of commercial production and distribution networks compound its marginality. Despite having a place on the Film Registry, Breckinridge and her films have received little scholarly attention. This neglect cannot be ascribed to a shortage of documentation about her work; archival and historical sources of information about Breckinridge’s life and filmmaking are plentiful. She took meticulous notes during the production of her completed films, and along with her published memoir, these offer us unique access to Brickinridge’s filmmaking activities.

Grandchild of Vice President John Cabell Breckinridge on one side of her family, and the industrialist B.F. Goodrich on the other, Breckinridge was a member of the New York aristocratic class. She was also, in many respects, a “New Woman” of the 1920s and 1930s who sought out advanced education, socially committed work, and a career as a photographer and journalist. Her films reinforce this attitude, focusing on women in professional roles  (frontier nurses) and higher education (university students and professors). Breckinridge became interested in journalism and international affairs while a student at Vassar College. She participated in the 1925 International Conference of Students in Copenhagen, and was on the founding Executive Committee of the National Student Federation of America. Breckinridge contemplated a transfer to the Columbia School of Journalism, but ultimately graduated from Vassar in 1927. Her appetite for adventure is evident in her extensive travels and training as a pilot. However, Breckinridge’s privileged social position meant that she never completely relied on working for an income.

According to a 1977 speech that she gave about her film She Goes to Vassar (1931), Breckinridge received a 16mm camera for Christmas in 1926 (when she was twenty-one years old, and a Vassar undergraduate), but was already an experienced still photographer, having taken stills since age nine, and developed her own photographs since age fifteen (1). Her home movies, held at the Library of Congress, included footage of Vassar that winter and other travel and holiday films. After her graduation from Vassar in 1927, Breckinridge worked for a period for her cousin Mary Breckinridge’s Frontier Nursing Service in Kentucky. This would eventually lead to her production of The Forgotten Frontier in 1929-1930. To make this film, Breckinridge sought out an education in filmmaking via the amateur film world, and the New York-based Amateur Cinema League (ACL) in particular. Her production notebook for The Forgotten Frontier, archived at the Library of Congress, includes a diary that chronicles Breckinridge’s training in camera operation and cinematography in the fall of 1929. Her instructor in this was ACL technical consultant, and Movie Makers magazine contributor, Russell Holslag. Breckinridge also became involved with amateur film culture, joining the Metropolitan Movie Club of New York and, according to an article entitled “Vacation Films” in Movie Makers, presented footage of a trip to Mexico at a club meeting in 1930 (1930, 444). Movie clubs provided filmmakers with a venue for gaining technical skills and receiving advice about their current projects. During the 1930s, Breckinridge herself contributed an article and several photographs to the ACL’s Movie Makers magazine, and her activities as a filmmaker and member of the organization were also frequently noted. 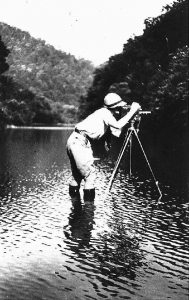 Marvin Breckinridge at work, circa 1930. Courtesy of the Library of Congress.

The Forgotten Frontier was filmed on 35mm, with a camera provided by Mary Breckinridge. The production of the film started in December 1929, and continued through the winter and spring of 1930 over the course of several visits to Kentucky. In her memoir My American Century, Marvin recalls that her cousin’s instructions for the film were explicit: Marvin was responsible for writing a script and filming it but there would be no professional actors, costumes, or make-up. They could, “where necessary, stage events where they had occurred with the nurses and doctors of the FNS, and the people of the mountains would play themselves” (2006, 90). The resulting style is substantially more evocative than a pure informational film. It is especially effective in its depiction of the hardworking women working for the Frontier Nursing Service. Wearing breeches and sporting short hair, these nurses on horse-back are depicted as tough medical professionals. The film also captures the rugged settings of southeastern Kentucky vividly, as well as the rural and backwoods folks served by the Nursing Service. The portrait of the region anticipates the Farm Security Administration photography of rural life that would follow later in the decade. The film’s public premiere took place in January 1931 in New York, but by this time it had also been acclaimed by Movie Makers magazine as one of the Ten Best amateur films of 1930 (1930, 758, 788).

The success of The Forgotten Frontier did not lead to a career in film, but it did result in a further commission. Starting in 1931, Breckinridge lived in Washington, D.C. and worked for the Democratic National Committee. At the same time, from approximately February to August 1931, Breckinridge devoted many weekends to producing a film for Vassar College’s alumni association. The result was She Goes to Vassar, a one-reel film that provides an overview of college life from the perspective of a new freshman student. From her arrival on campus, to settling into her new dorm and meeting her professors and classmates, the film depicts many facets of the college experience. Perhaps most striking about the film from today’s perspective are the shots of the academic environment, as the young women attend lectures and labs instructed by their professors, many of whom are also women. Though it was ultimately used primarily as a fundraising tool by the college’s alumni association, the film nevertheless provides a valuable glimpse of this women’s college through the eyes of a recent graduate.

The Library of Congress holds copies of Breckinridge’s films including both The Forgotten Frontier and She Goes to Vassar. In addition to these, there are four other titled works in the Library of Congress collection, which I have not yet had an opportunity to view. Three of these date from Breckinridge’s 1932-3 trip to Africa, during which she took many still photographs (Some of these photographs were published in Olivia Stokes Hatch’s book Olivia’s African Diary: Cape Town to Cairo, 1932.) Breckinridge took a 35mm camera on the trip, but later wrote in her memoir that “we traveled so fast that I couldn’t use the movie camera very often or very well. A movie requires a theme, a purpose, the ability to make some statement that holds it all together. It takes time to figure out the meaning of what you are seeing and time to get the scenes you need once you have figured it all out” (98). This account contradicts a more contemporary report of her trip published in Movie Makers as “Filming a New Africa” immediately after her return, in which she describes spending several days shooting and planning her films (1935, 153, 172-3). The Library of Congress lists “The Ruins of Zimbabwe, Rhodesia”; “A School for Natives, South Africa”; and “Golf in the Belgian Congo” among her films from this trip. An additional film in the Library of Congress collection dates from a visit to Chichen Itza in Mexico, likely in 1930. An examination of these films would determine the extent to which we can consider them “finished” works, but in her own recollections Breckinridge affords them much less significance than The Forgotten Frontier and She Goes to Vassar.

After returning from Africa in 1933, Breckinridge again lived in Washington, D.C., this time working in the office of Democratic congresswoman, and distant relative, Isabella Selmes Greenway. In 1936, Breckinridge enrolled in the Clarence White School of Photography in New York and, upon graduating in 1937, launched her career as a professional photographer. She set up a studio, but it was really as a travel photographer and photojournalist that she found success. Over the next few years Breckinridge published photographs and sometimes articles in several magazines, including LIFE, Harper’s Bazar, and Town and Country. In 1939, Breckinridge was in London when World War II broke out and was asked by her friend Edward Murrow to present CBS radio broadcasts about conditions there. She continued this work in 1940 on the European continent, but quit that year when she married Jefferson Patterson, an American consular official serving in Berlin. This marked the end of Breckinridge’s career in broadcasting and photojournalism, replaced by a “career” as a diplomatic spouse, which continued through the 1950s. It appears that Breckinridge’s media production after her marriage was limited to home movies of her family, but more research is needed here.

In examining Marvin Breckinridge’s film career, important questions emerge about the position of amateurs in the history of women’s filmmaking. Breckinridge came to filmmaking via the amateur world but she aspired to professional results and approached her film training and productions with a professional attitude. However, she did not primarily use her films to turn a profit or seek an income, instead producing them for their fundraising or social value. In these senses, she was an amateur, working outside of mainstream production contexts, and generally unconcerned with the financial returns of the activity. More research is needed to fully understand Breckinridge’s career as a filmmaker alongside histories of other women–from a variety of different social backgrounds–who worked as prolific, polished amateur filmmakers.

The Mary Marvin Breckinridge Patterson Collection at the Library of Congress also holds a number of home movies (1927-1976).