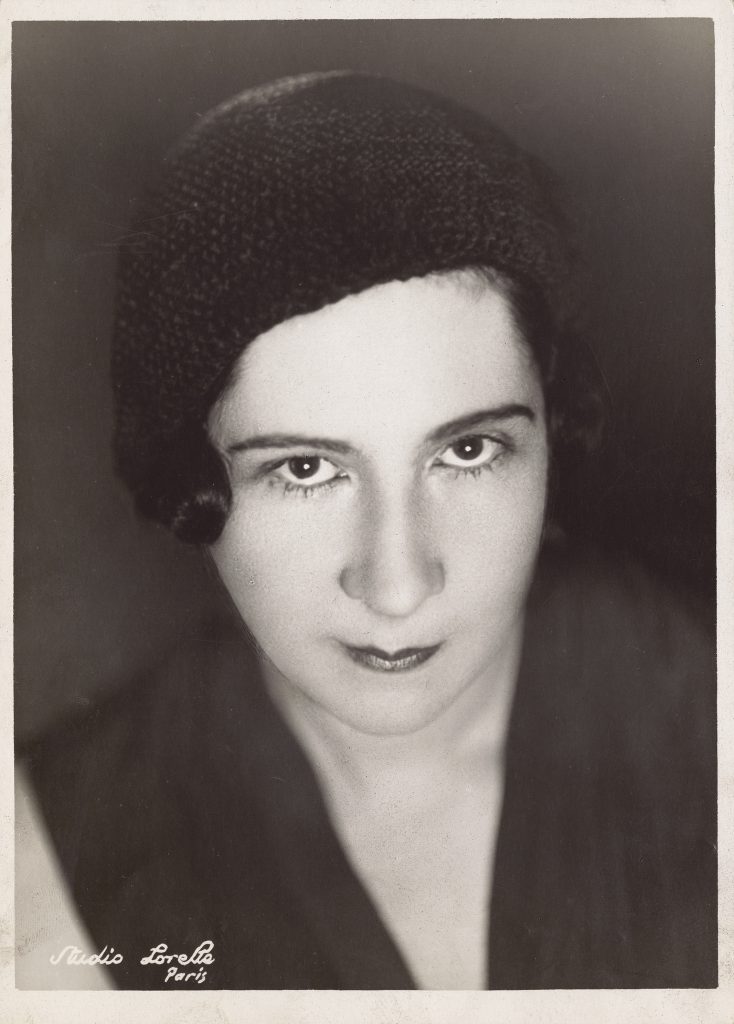 Marguerite Viel was a French filmmaker known primarily for her work in the 1930s, when her wide-ranging contributions to the cinema as a pioneering sound editor, dialogue writer, and director were often mentioned in the press. But Viel’s film career started a few years prior, during the silent era, when she collaborated with Jean Epstein. In 1926, Viel became the assistant sales manager and silent partner at Epstein’s independent production company, Les Films Jean Epstein, where he came to rely on Viel’s financial support (Daire 2014, 79-80). After Epstein completed La Glace à trois faces in 1927, Viel came to his aid again and provided him with the funds necessary to finish his celebrated film La Chute de la Maison Usher (1928) (Daire 94). Receipts held at the Cinémathèque française reveal that, instead of giving her any monetary compensation for her investment, Epstein transferred ownership of three of his films to Viel in 1928: Mauprat (1926), La Glace à trois faces, and Six et demi onze (1927). In 1929, Viel worked on Czech director Leo Marten’s film Dzungle velkomesta/La Jungle d’une grande ville (Fronval 1929, 10), either as co-director or artistic consultant, as the credits on the extant print from the National Film Archive in Prague indicate. According to an online synopsis published by the archive, the drama, which was shot silent but was ultimately released with sound in 1930, concerns a young woman who becomes involved with a con man and his partner (“Jungle of the Big City” n.p.). Dzungle velkomesta is the only silent film that we know of today where Viel was directly involved in the production.

In the sound era, Viel directed several other films: Terre Farouche (1930), which is considered lost today; two comedies in 1932 with Richard Weisbach, Occupe-toi d’Amélie and Une Petite bonne sérieuse (also considered lost); and her most widely accessible film, La Banque Némo, which was shot in 1933 and released in July 1934. If very little is known about Viel’s silent film work, then the sound films she directed show her interest in comedy, particularly the subgenre of identity swapping, and in the subversion of moral codes and sexual propriety. According to film scholar Colin Crisp, who studied 1,300 films from the period, La Banque Némo uses the comedic mode to present a very cynical take on French society (2002, 81).

Through the first two years of the 1930s, Viel also worked steadily as a sound editor and dialogue writer. As such, she handled sound and/or adapted several early sound films for a French-speaking audience. She was responsible for the dubbing of Erich von Stroheim’s The Great Gabbo (1929), Erich Waschneck’s Passions (1931), and Walter Ruttmann’s Feind im Blut. She was sound editor for the documentary Les Chemins de la renommée (1931) by Claude Lambert and Mon ami Tim (1932) by Jack Forrester. Viel also wrote the dialogue for William Thiele’s L’Amoureuse aventure (1932).

The reasons for Viel’s disappearance from the film industry after 1934 is, at the time of this writing, unknown. Her career, marked by the transition from silent to sound filmmaking, deserves more attention as an example of women’s versatility throughout cinema history. The financial support Viel provided for Epstein and her work at the end of the silent era and on early sound films highlight the more ambiguous ways, beyond the clear-cut categories of “director,” “screenwriter,” or “producer,” that women worked in film throughout the silent period and into the sound era.

With additional research by Aurore Spiers

1. Marguerite Viel as Director and Screenwriter

As sound editor, Marguerite Viel was responsible for the dubbing (into French) of foreign sound productions. Of the titles listed in the text, only The Great Gabbo (Dir. Erich von Stroheim, 1929) and Feind im Blut (Dir. Walter Ruttmann, 1931) are known to be extant. However, the versions held in FIAF archives will most likely have no mention of Viel. A print of The Great Gabbo is at the Library of Congress and a print of Feind im Blut is held in the British Film Institute's collection. Passions, Les Chemins de la renommée, Mon ami Tim, and L'Amoureuse aventure are all considered lost today. Further research is required since there may be other titles that Viel worked on as sound editor and dialogue writer.

A July 10, 1930 article in Pour Vous by a writer with the initials R.L. indicates that Marguerite Viel collaborated on Gustav Machaty’s silent film Erotikon (1929), a pioneering exploration of women’s sexuality (10). On August 22, 1930, Ciné-Comoedia also mentions that Viel was connected to Erotikon, yet her role remains quite ambiguous (“Petites et grandes nouvelles” n.p.). Most likely, Viel worked on the film’s sound version when it came out later in France. In any case, her name does not appear anywhere in the original credits of the silent version.