Actress Mae Murray’s famous epithet, “The Girl with the Bee-Stung Lips” describes far more than her cupid-bowed mouth; it evokes something unusual, distracting, and for some of her fans perhaps even overwhelming.  Also known as  “The Gardenia of the Screen,” Murray’s presence can be considered excessive and baroque, pleasurably perfuming and intensifying audience experience beyond whatever movie happens to encircle her.  Critics of Murray’s abilities consider her actions (vamping villains at midnight) silly and her presentation (bee-stung lips on an 1840s girl from Utah) incongruous (Slide 2002, 259).  But a force of nature is not necessarily natural, and Murray’s fans reveled in her colorful performances. 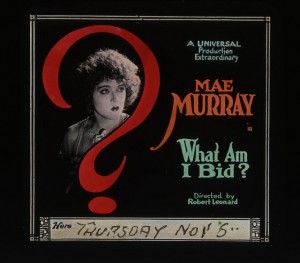 Lantern slide, Mae Murray in What Am I Bid? (1919). Courtesy of the Museum of the Moving Image.

Indeed, an acting style as gestural as Murray’s is anything but naturalized, as in merging with an ensemble or submitting to a role; it is a hallmark of the nineteenth century melodramatic repertoire.  Further, Murray’s signature dance narratives actually conjoin stage stardom of the late 1800s with the foundations of movie stardom in the early 1900s by existing without as well as within the text.  Apart from personal taste–predilections for exaggeration or realism–French Surrealist writer Jacques Rigaut was simply intoxicated by something alogically sublime: “Her little laugh you’ll never control, her latest lies, her next lies, her gowns, her exasperating childishness, her ultimata about a glove or stroll, things you’re unaware of…or an extravagant reward, of vice, I’m in love with Mae Murray (Rigaut 2000, 205).”

Lantern slide, Mae Murray in Face Value (1918). Courtesy of the Museum of the Moving Image.

Born in Portsmouth, Virginia, Murray (née Marie Adrienne Koenig) learned to dance in Chicago, where she was employed by a number of nightclubs as a chorus girl.  In pursuit of the dream of stage stardom, she moved to New York, changed her name to Mae Murray, and immediately found work as a dancer.  Her Broadway debut in 1906 was the result of an emergency substitution for Irene Castle, co-star of Vernon Castle, in Irving Berlin’s first musical, “About Town.”  Joining the chorus line of the Ziegfeld Follies in 1908, by 1915 Murray had become a headliner.  Shortly thereafter, Adolph Zukor signed her to a screen contract with Paramount. 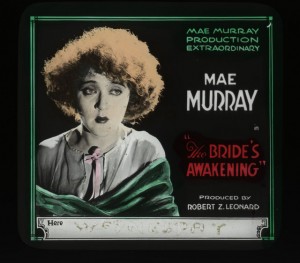 Lantern slide, Mae Murray in The Bride’s Awakening (1925). Courtesy of the Museum of the Moving Image. 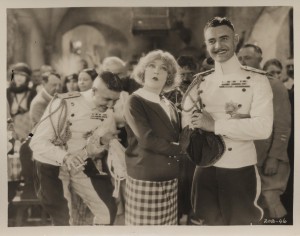 John Gilbert, Mae Murray, and Roy D’Arcy in The Merry Widow (1925). Courtesy of the Museum of the Moving Image.

Released in 1916, Murray first film, To Have And To Hold secured her status as a movie star (“Mae Murray Makes A Good Movie Star”), generating a string of box office hits, including the De Mille-directed The Dream Girl (1916) and A Mormon Maid (1917), in which she played alongside then-actor Frank Borzage.  Her second husband Robert Z. Leonard, with whom she joined Universal to open her own production unit, Bluebird, directed most of Murray’s films in the 1910s. In films such as Her Body in Bond (1918), Leonard created a dance prologue in which she performed as Pierrette, replacing the expository approach of intertitles with pantomime.  Perhaps because many of her films contained dance sequences designed for her, such as The Delicious Little Devil (1919) with her former onstage dance partner Rudolph Valentino, Murray was one of the first actresses to demand live mood music on her sets (as well as the ubiquitous soft focus required of so many actresses).

In 1922 Murray and Leonard signed with Louis B. Mayer to make films for MGM under the Tiffany label, producing eight elaborate showcases for Murray’s extravagant and florid performance style.  After Circe the Enchantress (1924) Murray and Leonard parted.  [See Mae Murray, Interview, December, 1959, Columbia University Oral History Project, 1227-1228, where she says she named the company after her Tiffany ring, about which “I had my own way,” but complains about being called “hard to handle” in her account of the move from her company to Metro Goldwyn Mayer. EDs.] 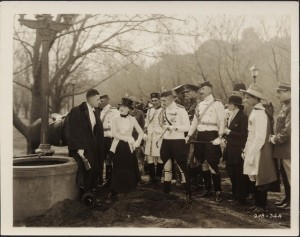 Mae Murray, The Merry Widow (1925). Courtesy of the Museum of the Moving Image.

The unquestionable apex of Murray’s cinematic oeuvres was the 1925 von Stroheim masterpiece, The Merry Widow, in which she famously waltzed with leading man John Gilbert.  Critical and popular reception for the film was superlative.  In addition to praising artistic choices, such as the colors in the wedding sequence at the film’s end, the New York Times identified a new dimension to Murray’s range in this “fantastic affair:”

Mr. von Stroheim also is to be credited with having elicited from Mae Murray the best acting she has done in the last few years…Here she is not the spinning top she was in other features directed by Robert Z. Leonard, but almost a restrained actress, who gives a splendid account of herself in every situation.  She illustrates her grief and her joy, her contempt and her admiration in telling style (“Mae Murray Charming in The Merry Widow”).

Murray made three more films for MGM before marrying her fourth husband, David Mdivani, a specious ‘Prince’ who coerced her into remaining in Europe, effectively nullifying her contract with the studio.  After another divorce, which ended in a bitter custody battle in which she eventually lost her son, Koran Mdivani, Murray’s career began to deteriorate.  She acted in a few low-budget talkies in the early 1930s, and in 1934 returned to Broadway briefly to perform in The Milky Way.  In the 1940s she made regular appearances in the Times Square establishment, Billy Rose’s Diamond Horseshoe, where her act included dancing the Merry Widow Waltz. 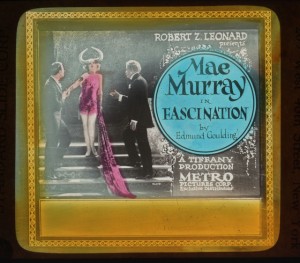 Lantern slide, Fascination (Tiffany Productions, 1922). Courtesy of the Museum of the Moving Image.

Apart from collaborating with Jane Ardmore on her aptly entitled biography, The Self-Enchanted (1959), Murray’s final decades were spent in eccentric reverie and abject poverty [See 3 pages from her unpublished memoir “Life Stories.” EDs.]. Wandering from coast-to-coast, she was occasionally discovered absently humming the Merry Widow Waltz on a Central Park bench. Like Blanch Dubois and Norma Desmond (a character considered to be inspired in part by Murray) her lyrically lavish imagination, which for the French Surrealists once evoked something of the uncontrolled, had suffused her own perception.  As she introduced herself to a doctor at her final residence, the Motion Picture House and Hospital, “I’m Mae Murray, the young Ziegfeld beauty with the bee-stung lips – and Hollywood is calling me (Marion 1972, 297).” 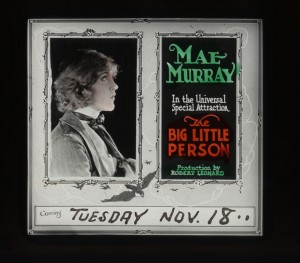 Lantern slide, Mae Murray in The Big Little Person (1919). Courtesy of the Museum of the Moving Image.

“Mae Murray Makes a Good Movie Star: Former Dancer an Attractive Heroine in ‘To Have and to Hold’ at the Strand.” New York Times (6 March 1916): n.p.

Marion, Frances.  Off With Their Heads! New York: The Macmillan Company, 1972.

The Bride's Awakening (1918) via the EYE Filmmuseum (Dutch intertitles) (fragment)

The Delicious Little Devil (1919) via the EYE Filmmuseum (Dutch intertitles)

The Twin Pawns (1919) via the EYE Filmmuseum (Dutch intertitles)

The ABC of Love (1919) via the EYE Filmmuseum (Dutch intertitles)