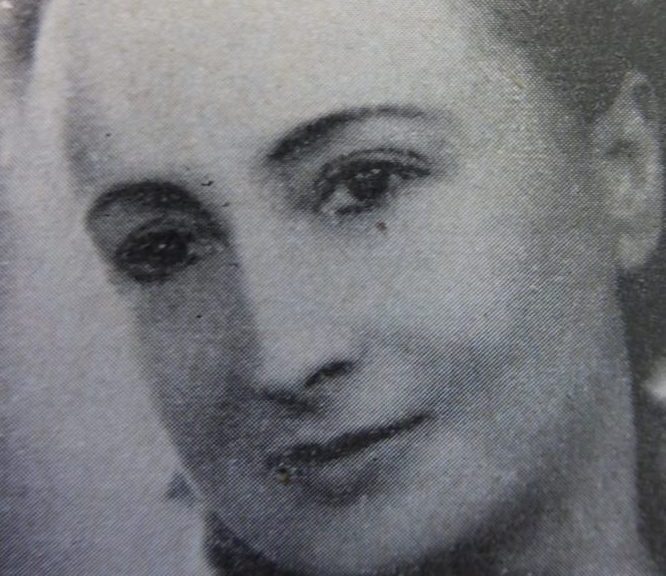 Lucienne Dechorain, whose professional name was Lucie Derain, was above all a film critic, but she was also a film director, film editor, fiction writer, and very likely a screenwriter. She entered the world of cinema in 1919 by subtitling and editing newsreels at Van Goitsenhoven, Gaumont (in 1921), and Eclipse-Journal (in 1923). We know that she wrote the screenplay La Tour de Vie et de Mort for Films Albatros, although the manuscript provides us with no further information, including a year, and there is no evidence that it was ever made into a film. She was a contributor to Hebdo-Films, La Semaine Cinématographique, Le Quotidien (Paris, 1923-1936), Cinémagazine, Pour vous, Cinémonde, Ciné-Miroir, Photo-Ciné, and La Cinématographie Française. Since in this last journal the editorial board is not mentioned, it is not possible to definitely state for how long she belonged to it, however, she was a member of the editorial board (Thévenet 1953, 233; Beyle and D’Hugues 1999, 131). Between October 11, 1924, and June 1940, she wrote the “Courrier des studios” column (also called “Studios,” “Dans les studios,” “Le Travail dans les studios”), a survey dedicated to the news from the studios and the set. She was also a contributor to La Technique Cinématographique, Ciné-Amateur, and La Vigie Marocaine, as well as the editor-in-chief of Le Film Français from 1945 to 1948. 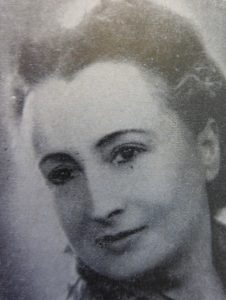 Scan of portrait of Lucie Derain in book Annuaire biographique (1953).

Derain also wrote the titles and subtitles for foreign films, such as the American Should a Girl Marry/Destin de Femme (Scott Pembroke, 1928) and the Russian The Patriots/Okraina/Faubourg (Boris Barnet, 1933). It appears that she first tried her hand at directing with Désordre (1927), a 16mm short compilation film, as mentioned some years later by Maurice M. Bessy, who considered it a real avant-garde film: “La nouvelle [avant-garde] c’est Préméditations; Désordre, de Lucie Derain et de Jean Tarride, film de montage bien conçu” [Trans.: The new avant-garde is Préméditations; Désordre, by Lucie Derain and Jean Tarride, a compilation film well conceived] (Bessy 1931, 52). Désordre was intended to be integrated into the homonymous drama written by the Lorraine-born avant-garde poet, writer, and playwright Yvan Goll, according to Claude Beyle and Philippe D’Hugues (131) who profile Derain’s assistant or co-director Jean Tarride, future director, together with Jacques Brunius, of Record 37 (1937). Beyle and D’Hugues do not mention Derain among their “oubliés du cinéma français” [“forgotten people of french cinema”] and do not give further information about her film Désordre, which is unknown even at the Goll archive preserved at the Musée Pierre Noël in Saint-Dié des Vosges. This most likely means that it was not eventually integrated into Goll’s play. What is certain is that at some point the film came out, credited to Derain and Tarride, and was scheduled at the Studio des Ursulines from September 26 to October 31, 1930. This information is based on issues of the touristic guide La Semaine à Paris, published by the Office de tourisme et des congrès (1930, 55; 1930, 64; 1930, 64). 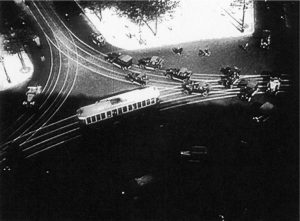 The only 35mm film that Derain both wrote and directed, Harmonies de Paris (1928), was released, although without much critical success, together with René Clair’s La Tour (1928) to fill the release program of Les Deux Timides (1929) by Clair. Both of these films were produced by Films Albatros. Derain dedicated some of her articles to the work at the Albatros studio, where she probably went regularly. The company was managed initially, from 1919 to 1922, by Joseph Ermolieff and then by Alexandre Kamenka, and was formed around Russian revolutionary exiles like actors Ivan Mosjoukine, Nathalie Lissenko, and Nicolas Rimsky, directors Jakob Protazanoff, Alexandre Volkoff, and Viatcheslav Tourjansky, and set and poster designers Ivan Lochakoff, Boris Bilinsky, and Lazare Meerson. In a second phase, in which we can situate Derain, Albatros welcomed young French directors such as Clair, Jean Epstein, Jacques Feyder, Marcel L’Herbier, Robert Boudrioz, and Marcel Silver, who contributed to the renewal of French cinema (Albera 1995). 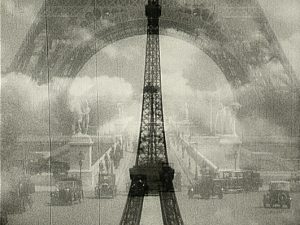 Today the Cinémathèque Française’s Albatros Collection contains a few archival documents related to Derain, whose biography and career are very difficult to reconstruct because information about her is simply too scarce. What one can learn from the Albatros Collection’s documents, however, is that she wrote the titles of Adelqui Millar’s Souris d’hôtel (1927) (Albera 175) and that, in 1929, Harmonies de Paris was distributed together with Clair’s La Tour in Great Britain as well, as proven by a letter from a commercial agent at the Gaumont-British company to Albatros on January 4, 1929 (n.p.). The agent says that they wanted “such good French films” to become better known in the United Kingdom. Nevertheless, Derain’s film is quite far from La Tour’s avant-garde style and the two films never met equal critical reception, Harmonies de Paris receiving positive but not enthusiastic reviews. For example, Cinémagazine described the film as a “summary,” a “nice trip” surely appreciated by everyone who loves Paris, while concluding that the film must be praised and encouraged (Francès 1928, 493); Pour vous focused on how Harmonies de Paris speaks about the soul of the French capital through simple images (Régent 1928, 6). Derain herself, interviewed by a journalist named “Saint-Sèvre” of L’Ami du Peuple, explained that the aim of the film was to show “some harmonies of Paris…and nothing more. I tried to create a synthesis of the city’s charms” (1928, n.p.). 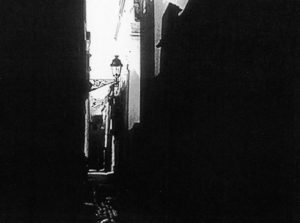 Harmonies de Paris, restored by the Cinémathèque Française in the 1990s, was shot entirely on panchromatic film and was meant to be a documentary tour of Paris in thirteen thematic chapters. The subject is a tourist group arriving in the French capital by airplane, which explains the many shots of monuments and other canonical places. Derain did not hide the fact that she drew her inspiration from Walter Ruttmann’s Berlin: Symphony of a City (1927), whose avant-gardism she partially copied, along with some of its images, such as workers leaving a factory, city traffic, railways, and shop windows. However, the formal comparison seems to literally stop (due to the use of a static camera in parts of Harmonies de Paris) before the focus on a few corners of old Paris, as if it were stuck in time, seen with a nostalgic attitude: an intertitle tells us that in Paris the past emerges everywhere. 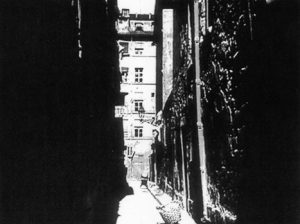 In this way, the film creates a contrast between “modern fever” or “fièvre moderne,” to which the second chapter of the documentary is dedicated, and historical memory, which is represented in some chapters by the shots of monuments, gardens, and corners of the old Paris. The photography of Eugène Atget probably served as inspiration for Derain’s work. Atget’s work was exhibited for the first time in the spring of 1928, just before Derain shot her own film, in an important Salon Indépendant de la Photographie retrospective, which was announced by Cinémagazine on May 18, 1928 (262). Another very probable model is Claude Lambert’s Voici Paris (1926), a film also influenced by Atget’s photographs (Juan 2004, 304) with which Derain was certainly familiar. This can be inferred by her 1929 Cinémagazine article “La ville au cinéma,” where she calls the film “ingénieux et vivant” [“ingenious and alive”] (320).

In January 1928, some months before making her film, Derain wrote “L’art moderne à l’écran” in Cinémagazine, where she affirmed that what characterizes the modern era is a “nervous, bright, quickened life” (148) and that cinema and other arts can grow and nourish each other up to a “revenge,” or dominance, of cinema, which will become, thanks to the avant-garde experimentations of the time, “the modern time’s writing” (150). Later, some time after the press release of the film, in February 1929, she wrote “La ville au cinéma” where, while saying that Ruttmann’s Berlin is the most interesting and complete film ever made on a city, she mentions some French films like Voici Paris, Études sur Paris (André Sauvage, 1928), La Zone (Georges Lacombe, 1928), and Ménilmontant (Dimitri Kirsanoff, 1928).  She particularly appreciated the last two for the values they convey: nostalgia and emotion issued from the shots of popular Paris (320-321). 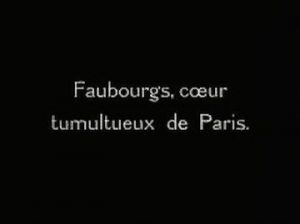 What emerges from Derain’s Harmonies de Paris is a sort of anticipation of her 1929 article: the film does not really offer a modern vision of a metropolis, as one could say about other avant-garde films, in particular Ruttmann’s film on Berlin or Dziga Vertov’s The Man with the Movie Camera (1929). In these films the main features of a modern city are functionality and speed, while in Harmonies de Paris the French capital is not generally seen, after all, as a symbol of modernity, but as a place where humanity can still express itself and escape the modern tendency toward anonymity. One can see this idea in the film, for example, in the contrast created between the distorted shot of the Stock Exchange, La Bourse, which lends a sense of foreboding, and the more human shots of people quietly crowding Les Halles and of workers and shopkeepers going about their daily tasks. This idea of the metropolis puts Harmonies de Paris in a category with a series of other films about Paris, including Marcel Carné’s well-known Nogent, Eldorado du dimanche (1929). These films show some connection to the then emerging literary movement of “populism” (Vichi 2017), whose center is constituted by the “mythe du peuple,” as Alain Pessin calls it (2000, 131-144), which considered brotherhood and innocence as the fundamental values represented by ordinary people. 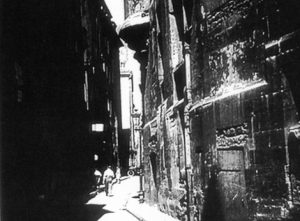 According to Myriam Juan, in 1929 the press announced Derain’s new project, a documentary about Rouen titled Rouen, Ville Sonore, but this information has to be checked by an in-depth analysis of the 1929 press (2002, 246).  Unfortunately, this film was probably never made. However, Derain’s career continued in another vein, and, starting in 1929 and continuing throughout the 1930s, she authored numerous novelizations of films, mostly published by Jules Tallandier in the popular collection “Cinéma bibliothèque.”

Moreover, in the beginning of the 1930s, she was co-founder of the Ciné-club de la femme (a subject which would be worth pursuing in more depth) where a young Henri Langlois collaborated with her for two months in 1934 and helped with film programming. In a note written by Langois in 1952, this experience is remembered by the Cinémathèque founder as the key moment where he understood that many silent films where dispersed in a sort of second-hand market and, in some ways, this inspired him with the idea of collecting them in an archive (Mannoni 2006, 31). Furthermore, it is at the Ciné-club de la femme that Langlois met Jean Mitry, with whom he would create (together with Georges Franju) the Cinémathèque Française in 1936.

The importance of studying Derain lies not only in the fact that she represents the female intellectual figure of her time–with all the implications of that function–and the marginality of women in the cinema milieu (including at Films Albatros), but that she also encourages us to explore those pockets of film history that have not yet been fully brought to light. Derain’s film lets us imagine a documentary panorama that remains almost completely hidden and unknown still today, both in terms of archives and research. Furthermore, Harmonies de Paris represents a kind of urban film from 1920s France whose characteristics are not exactly those of the established “urban symphony,” but which refer instead to specific aspects of French culture. According to many, even in light of existing scholarship, this group of films still needs to be fully assessed and examined (Gauthier 2004, 64-68; Jeancolas 1989, 20-22; Juan 2004, 291-314). To historians interested in Derain’s work, another obvious subject of study is the enormous popularity, at the beginning of the 1930s, of the roman-cinéma, what today we would call an “intermedial” genre that merits further investigation.

1. Lucie Derain as Director and Screenwriter

1. Lucie Derain as Director and Screenwriter

Much more research needs to be done on Derain's role as a title writer. The three films mentioned in this profile/filmography are most likely just the tip of the iceberg. The Cinémathèque Française holds DVD copies of Souris d'hôtel (1929) and Okraina (1933) (a DVD copy of the latter is also held at the Cinémathèque de Toulouse).