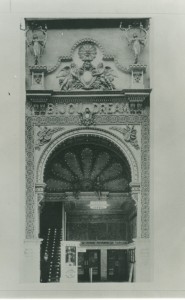 Nothing is known of Josephine Clement (usually called Mrs. Edward Clement in the trade press) before the summer of 1909, when she is mentioned as managing the Bijou Theatre in downtown Boston (on the corner of Washington and Tremont) for the Keith theater circuit. Nor is anything known after she left her position in early 1914.  During that period of nearly five years, however, she exerted a good deal of influence in the exhibition sector of the film industry. Along with the much better known S. L. (Roxy) Rothapfel, Clement established a model of the “artistic and wholesome” moving picture theater that was thought to appeal to a “refined” clientele. By late 1910, according to “a handsomely printed booklet describing its aims” and amenities (a reception room where a maid looked “to the comfort of ladies and children”; a “men’s smoking room”), the Bijou ran five daily shows of two and a half hours each, with programs comprised of several MPPC moving pictures, a one-act play, vocal and instrumental music (not illustrated songs), and “camera chats” using lantern slides and “stereoptican views.” This was a “high-class” variety program that had its supporters in the pages of the Moving Picture World and New York Dramatic Mirror and that Clement herself promoted as late as November 1912 in an address to the Massachusetts State Conference of Charities, and which subsequently was published in Motography. Why Clement “severed her connection” with the Bijou and was replaced by J.W. Craig in February 1914 remains uncertain, but a likely reason may be the Keith theaters’ decision to return to offering vaudeville acts as their principal entertainment in the face of the growing number of metropolitan palace cinemas and their programs organized around feature-length films.