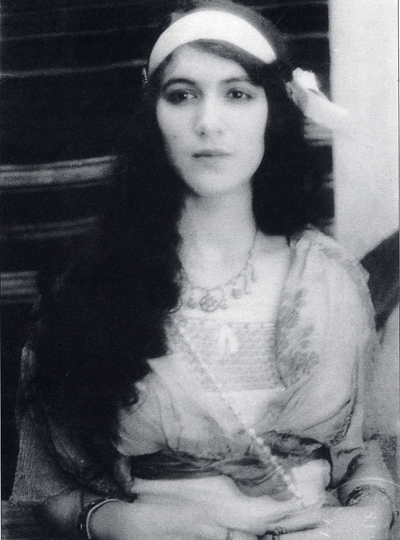 At the beginning of the twentieth century, women were still relegated to an inferior position in Tunisia. Women had no authority and could not give their opinion on issues that concerned the whole family. It was unacceptable for some parents to send their daughters to school. At the same time, women could not work in an office or elsewhere. Women had not yet removed the veil. Haydée Chikly, the first actress and screenwriter in Africa, lived in this context. “I do not want a quiet and easy life, I want to fight, strive and struggle” (Tamzali 1992, 11). That was the statement made by Chikly in 1918 when she was a little girl sitting on a terrace in Carthage, contemplating people going out for a walk on a Sunday and observing the routine activities performed by the girls of her generation. Haydée started her career when she was only sixteen. Not only was she a screenwriter and an actress, but she also cut and hand-colored films on occasion (Mansour 2000, 200). She played a part in building the history of Arabic and African cinema. 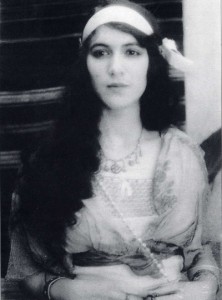 Haydée was born in Tunis on August 23, 1906, in a country where Muslims, Jews, Catholics, and Orthodox Greek lived in harmony and where you could see an Arab conversing with an Italian, a French, a Greek, or a Maltese. Her family tree illustrates the diversity that characterized the ancient history of Tunis. This young Tunisian lady had maternal ancestors from the Principality of Savoia. Bianca Ferrero, Haydée’s Italian mother, lived in Tunisia and worked as a nurse for the Red Cross. Ever since she was young, Haydée cultivated the hobby of writing, an activity encouraged by her musician mother. She alternated piano lessons, considered “tedious hours of exercises” (Tamzali 25), with writing. From her father’s side of the family, Haydée was the descendant of a Jewish family that had lived in Tunisia for a long time. Her grandfather, David Samama, was the banker of the Bey (the former king of Tunisia at the time of the Ottoman Empire), who established a banking institution that later became the Bank of Tunisia. The family name of Chikly was an alias chosen by Haydée’s father, Albert Samama, in reference to Chikly Island located in the Lake of Tunis and bought by his father in 1860.

Albert Samama Chikly, a pioneering researcher in many fields, was considered to be a legendary man. He was a supporter of X-rays, radio, the wireless telegraph (TSF), photography, and, especially, cinema. He encouraged Haydée to develop her passion for the cinema. She was her father’s muse and during her childhood, he would shoot scenes that she played. He would often photograph her, thus immortalizing the freshness of her youthful face. Haydée won the contest for “the most beautiful eyes of Paris” and was awarded the title of first actress of the Arab world.

In 1922, Samama Chikly directed Zohra, the first film with Haydée as protagonist and screenwriter. Being a dreamer, she decided to title the story Zohra, which in Arabic means “star of happiness,” the name given to the planet Venus. The name is explained in the original intertitle of the film, found in the archives of the family. The story of Zohra is well-written with a light plot. Ciné-miroir described it as “a simple but touching story” (1922, 8). The film follows a young French girl who survives a ship-wreckage on the north African coast of Tunisia and is rescued by a Bedouin peasant family whose daily life, under the roofs of their tents, unrolls before her eyes, as well as ours. They shear the sheep, make cous-cous, and collect water and wood until an airplane lands nearby and the girl goes back home.

Haydée Chikly in the last scene of Zohra (1922). Private Collection.

In 1924, it was announced that “The American director Rex Ingram went to Tunis to shoot an African movie” (Pittaluga 1924, 241), most likely The Arab (1924). Haydée was part of the cast and played a role alongside Ramon Navarro. Her career as an actress was supposed to take off and continue in Los Angeles. The director offered her a five-year contract, including travel fees and accommodation in Hollywood. The contract also covered her mother’s tutorage since Haydée was only sixteen years old. Unfortunately, her father prevented her from going. She later said that “it was her first great sorrow” (Tamzali 115). After that, she continued her career as a screenwriter. She wrote the screenplay for the film Ain-el-Ghezal/The Girl from Carthage (1922), and played the leading role. “The heroine of the film is a very beautiful young Tunisian with a curious oriental character involved in the various vicissitudes of the drama,” reported Tunisie Française in 1924 (4). 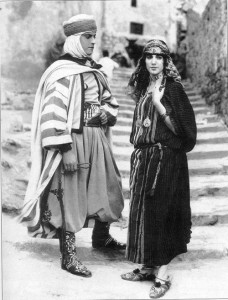 Haydée Chikly with Ramon Navarro in The Arab (1924). Private Collection.

In an interview conducted in Paris in 1924, Samama Chikly told Mon Ciné: “The screenwriter of Ain el Ghezal is my daughter Ms. Haydée Chikly, who is very passionate of cinema” (15). The fact that Haydée was the actual screenwriter is reinforced by the first intertitle of the film: “Ain-el-Ghezal, The Girl from Carthage, a drama set in the Arab life and played by the author, Ms. Haydée Chikli.” The Girl from Carthage is the dramatic story of a young girl forced by her family into marriage. According to filmmaker Omar Khlifi, “The main character of the movie, Ain el Ghezal, is the daughter of a Caid, Bou Hanifa, who forces her to betroth Bou Saada, a rich, wicked and brutal farmer” (1970, 30). In the meantime, Ain el Ghezal is secretly falling in love with Taleb, a muezzin and school teacher. On the wedding day, while the sacred rites and warriors’ representations are taking place, Ain el Ghezal escapes and joins Taleb in the desert. The horsemen start looking for them, catch the lovers, and kill Taleb, while the fierce Ain el Ghezal gets stabbed while covering her fiancé’s body. Thus ends this Tunisian romance drama.

We can see in this impossible love story a kind of Tunisian “Romeo and Juliet,” brought forth by the imagination of a young Tunisian girl. About the story of the film, Haydée said: “I wrote this story to show how badly women were treated when they were just sold off with an arranged marriage into a man’s world” (Tamzali 112). The screenplay of the film presents a feminist point of view embodied by a courageous heroine who takes her destiny in her own hands and decides to escape from her family-imposed fate. Forced marriage would later became the main topic of the Tunisian feminist movement. In the early 1980s, The Girl from Carthage’s script was removed from the family archives when the Ministry of Tunisian Culture planned to open a museum of cinema. Unfortunately, the material was then lost. While reading Haydée’s diary, the film’s story looks like a mirror to a part of her life, introducing “the most special and endearing habits and customs of the country: the wedding, the preparations, the parties, taken smartly where everything is alive, swarming and real” (Mansour 257).

Unfortunately, no other Tunisian films were shot during the silent era. Although The Girl from Carthage and Zohra remained isolated experiences, they were harbingers of future themes for the Tunisian cinema, such as the role and conditions of Tunisian women. Between 1924 and 1925, Haydée held a column in Le Petit Matin, a French newspaper of that time.

In 1929, Haydée got married to the Algerian Khellil Tamzali and became Haydée Chikly Tamzali. She left Tunisia for Algeria where she continued to write. She was active in the civil society, becoming President of Social Works, Secretary of the Red Cross, and President of the League Against Cancer. She wrote many short stories and articles for the Tunisian national newspaper La Presse, as well a book in 1992 comprised of true stories about the past called Lost Images. Chikly also continued to act, working with Ferid Boughedir in 1996 in A Summer in La Goulette and appearing in Mamoud Ben Mamoud’s documentary on Albert Samama Chikly. In her book, she also wrote about her life, ending it as follows: “I would like to conclude today, at the end of my life, saying that the most beautiful character of woman is to be a woman” (Mansour 200).

1. Haydée Chikly as Actress and Screenwriter