“We can also mention that Miss Håkansson, who has been with the union since 1921, is a particularly devoted member…[A]t several occasions she has showed an interest for union policies that unfortunately many of her male colleagues lack…Miss Håkansson is…as good a conductor as she is a union member, and therefore we have also found it well motivated to feature her picture and to bestow her with an honorable mention in our publication” (“Greta Håkansson” 336-337). In this 1928 quotation from Musikern/The Musician, the periodical for the Swedish Musicians’ Union, Greta Håkansson is highlighted as an example to follow. 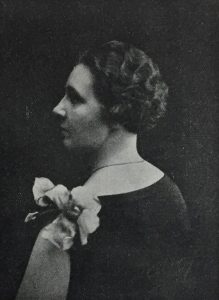 Greta Håkansson in Musikern in 1928.

We know that many female musicians played in theaters and some, like Håkansson, also performed the role of conductor. But despite this, the male cinema musicians and conductors in Sweden, with Rudolf Sahlberg and Otto Trobäck at the forefront, are the ones highlighted in historiographies. Women’s vital involvement in cinema music for the film medium since the early days has so far been very poorly investigated and documented. There are therefore still significant gaps in our knowledge about Håkansson’s life and work, and what can be presented here are merely a few biographical traces.

According to the brief 1928 biographical sketch in Musikern, Håkansson studied piano with Kerstin Runbäck and Astrid Berwald and music theory with Oskar Blom in Stockholm. She was also an assistant teacher at Richard Andersson’s music school. During the 1928­-1929 season, she became conductor of the 300-seat motion picture theater Påfågeln/The Peacock at St. Eriksgatan 84 in Stockholm. Besides Håkansson, who had the overall musical responsibility, on piano, the ensemble included a violinist, a cellist, and an oboe player, all positions contracted by men (336).

Håkansson’s time at Påfågeln was short-lived, however, as the ensemble was dissolved in the early 1930s when the theater installed sound film equipment. How and where Håkansson then continued her musical or cinematic career is still unknown. According to Dagens Nyheter, she seems to have continued in the film world, because in 1943 she appears as one of the founders of the all-female association Föreningen Filmia, which was formed in order to create a forum for women “working in the film industry as office workers or clerks, and wives of male employees and female cinema owners and cinema owners’ wives” (1943, 6). The idea was to facilitate contact between the film companies’ female employees. Håkansson served as treasurer in the association’s first board, and, as employment, she indicated the production company Sandrew-Bauman Film. 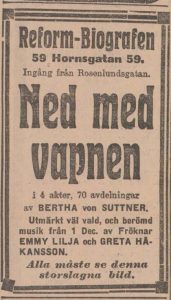 Finding information on Håkansson’s early career is just as difficult. The only trace that has so far been found is an advertisement for the Reform cinema at Hornsgatan 59 in Stockholm from December 1, 1915 in Aftonbladet. Håkansson is listed as one of two female musicians (the name of her female colleague was Emmy Lily). The duo performed the music for the Danish film Ned med vapnen/Ned med vaabnene/Down with the Weapons (1914) and, according to the ad, the music was both “excellent, well chosen, and famous” (2).

The Musikern article quoted above mentions Håkansson’s musical skills, but it was mainly as a loyal union member that she was honored with a biographical article. Normally only male musicians were featured in the periodical’s biographical tributes. If women appeared in such articles, they were almost exclusively sopranos from the opera stage. Even the periodical’s editor, Gustaf Gille, seems to have considered the need to justify the biographical text.