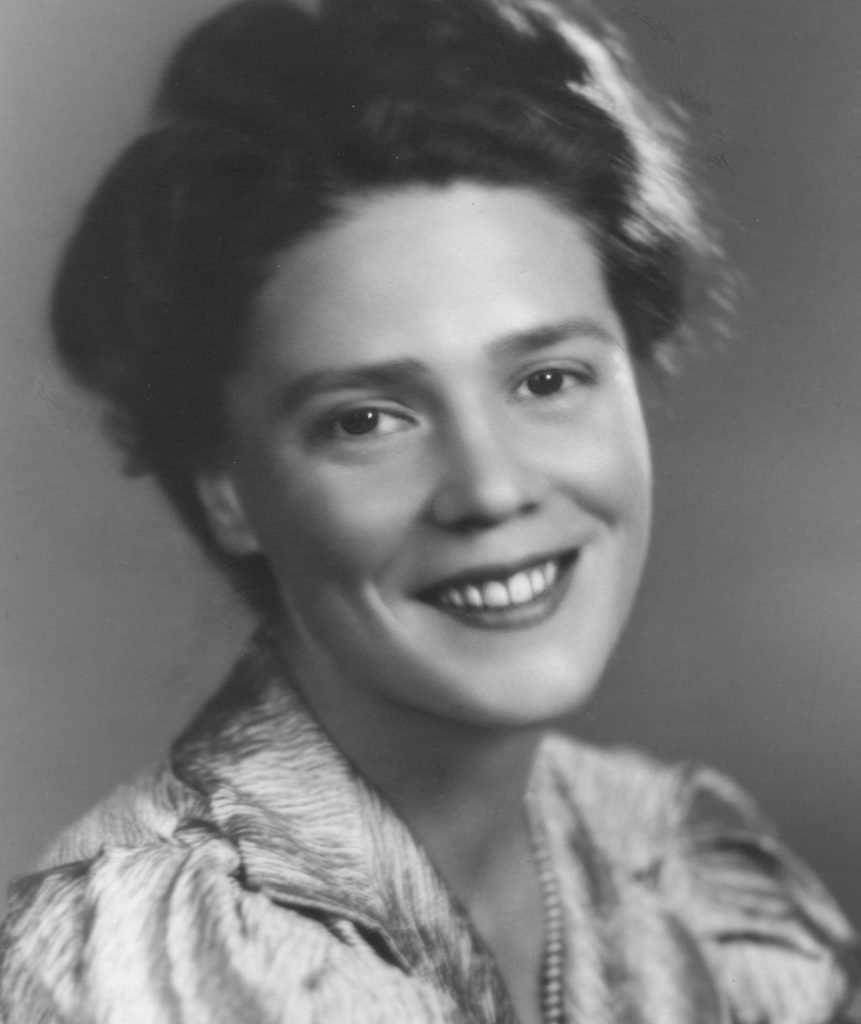 Gerda Hintze is one of the pioneer female screenwriters who worked in early Finnish film. In fact, only two female scenarists are known to have worked during the silent era: Katri Viita for Työn sankarilaulu/A Song About the Heroism of Labour (1929) and Hintze for Kajastus/Mirage (1930), which ended up being her only script that went to production. However, identifying all of the crew members of silent era Finnish films is challenging. Only a select few (if any) members of the crew were officially credited in the existing opening credits or programmes, which were available for patrons attending the screenings. In some cases, Suomen kansallisfilmografia/Finnish National Filmography only identifies the surname of crew members (Uusitalo et al. 1996). Also, gender neutral or masculine pseudonyms were sometimes used by women working within film, such as writer-screenwriters Hella Wuolijoki (Juhani Tervapää), Seere Salminen (Serp), and Kersti Bergroth (Tet), all of whom began their work in film later in the 1930s or early 1940s. 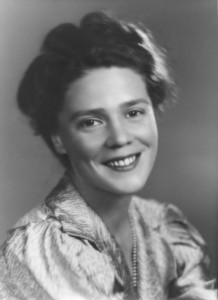 Hintze was born in Oulu, in the north of Finland, in 1905. She later relocated to Helsinki, where she worked as a pharmacist. Prior to Kajastus, Hintze did not have experience as a writer, but she did have a keen interest in history and photography. Hintze’s nephew, Sten Berger, has speculated that she encountered filmmaker Carl von Haartman whilst working at the pharmacy at Market Square in Helsinki, which led to Hintze penning Kajastus. Carl von Haartman had returned from the United States in 1928, where he had appeared in bit parts and as a supervisor on Wings (1927). In Finland, von Haartman began working as a director, screenwriter, and actor at the Suomi-Filmi production company.

According to Carl von Haartman’s autobiography, Suomi-Filmi had ambitious plans for a film about the Russification of Finland and Nikolay Bobrikov as the Governor-General of Finland. He wrote: “The screenplay was already done, and it only had to be fashioned into a shooting script. This took me a couple of months, and then pre-production started in practice” (1972, 144). Kajastus, directed by von Haartman, was filmed during the fall of 1929. However the story goes, Hintze wrote the original script for Kajastus, the historical drama set between Finland’s years of oppression, 1899-1905. Hintze alone was credited as the screenwriter in the film’s opening titles and in the programme, despite von Haartman’s apparent involvement. 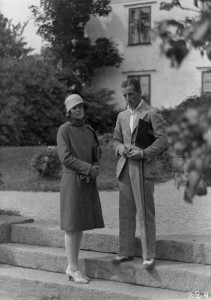 Hintze’s script for Kajastus combines political history and a love story. The film begins with Nicholas II of Russia signing the February Manifesto of 1899, which asserted the imperial government’s right to rule Finland without the consent of local legislative bodies. After the assassination of Nikolay Bobrikov, the Russian gendarmerie begin house searches to look for weapons. Kajastus is set in the Toivola country house, where the Cederström family and their staff reside. Siblings Oscar (Gunnar Wallin) and Louise Cederström (Elsa Segerberg) side with the Finnish Nationalist activists, such as their neighbour Antti Ahma (Aarne Leppänen). Oscar and Louise’s cousin Gustaf Cederström (Helge Ranin), who serves as a cavalry master in the Russian military, arrives in Toivola. Gustaf confesses his feelings for Louise but she acts cold towards him because of his Russian ties. Meanwhile, Oscar has previously been involved with Louise’s maid (Vivan Cravelin). Once he rejects her, she takes revenge on her former lover by reporting on the family’s alliances to countess Maria Feodorovna (Anielka Elter) and the Russian officials, thus endangering the activists’ dangerous mission. 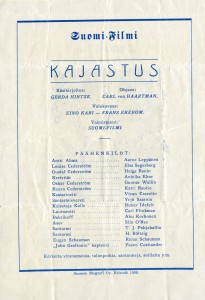 Kajastus premiered on April 13, 1930. It ended up being the last fully silent Finnish film. Kajastus was a highly ambitious and also an unusual Finnish film for its time. It even featured an international star, Czechoslovakian actress Anielka Elter, whose stay in Finland was widely reported by the press. Additionally, Kajastus features the work of another female film pioneer: fashion designer Jenny Kuosmanen of Salon de Mode designed the costumes.

Kajastus received mixed reviews upon its release. A reviewer for Karjala, going by the initials “H-e,” criticized Hintze’s script for touching upon history that felt too recent and too sensitive (1930, 5). A critic named “Ped,” writing for Ylioppilaslehti, thought that the film’s failure was the fact that it was advertised as treating the highly sensitive period in near history in an unbiased manner: “As a result, the film failed to convey the national and patriotic Finnish spirit that the audience expected because of the advertisement. The viewer objects in his/her mind to such an unbiased treatment which is not acceptable with certain things” (1930, 6-7). However, one can argue that the film has aged quite well partly due to the fact that it remains objective and rather detached in its treatment of the difficult period in Finnish history. The subject of the Russification of Finland and Finnish National activism became the topic of several films in the late 1930s—and this time with a much more obvious sense of patriotism. 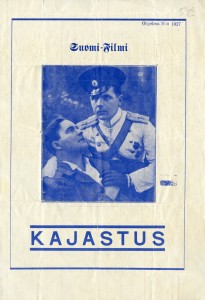 Hintze had plans for at least one other film script. A six page synopsis titled Lisa, written in Swedish, can be found at the National Audiovisual Institute. Hintze prefaces the text by suggesting it would work best as a “tonfilm-operette,” or “sound film operetta,” so it can be assumed that the undated synopsis is from the early to mid-1930s. Lisa is a rags-to-riches story mixed with romance and thrills. The story follows Lisa, an eighteen-year old girl who works at the Stockmann department store in Helsinki. By chance Lisa is given an opportunity to sing at a society matron’s party. She borrows a dress from work and has to hurry back in time to return it—only to discover that burglars have entered the department store.

Although Hintze’s other script never came to fruition, her experience as a screenwriter inspired her to continue writing. She would work as a pharmacist until her retirement, occasionally taking time off from work to write for magazines. In 1934, she traveled to Berlin and wrote an article for the magazine Fama about UFA’s Babelsberg Film Studio. After the Continuation War, she wrote for the Swedish language newspaper Hufvudstadsbladet. Hintze never married. She died in Helsinki in 1977.