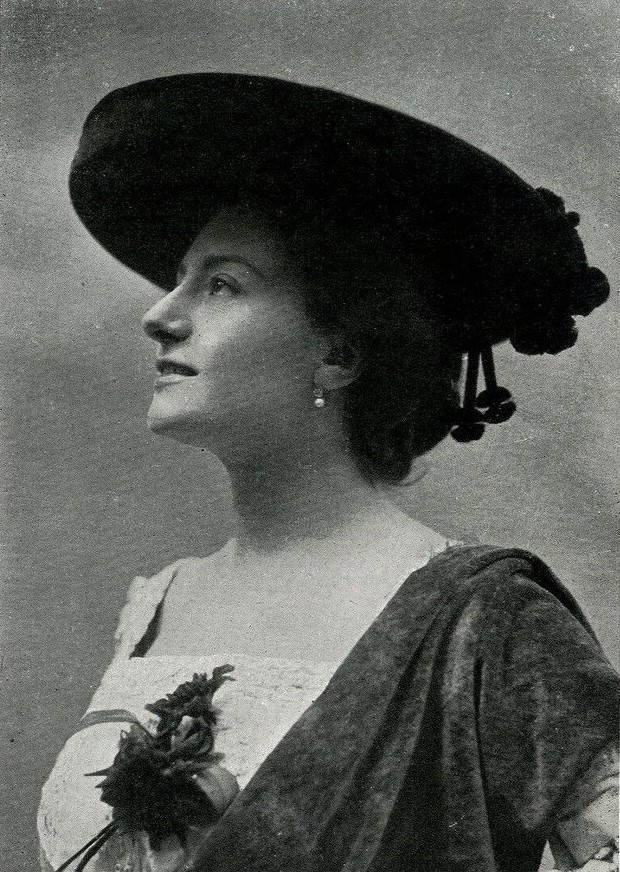 An opera singer turned film actress, screenwriter, director, and producer, Gemma Bellincioni was born in the Italian city of Monza on August 18, 1864. Both of her parents were opera singers, and Bellincioni made her own theatrical debut at age six (Baccioni 4). Her first leading role was in Carlo Pedrotti’s opera “Tutti in maschera,” which opened in Naples in November 1880. Critics were immediately impressed by her stage presence. Following this performance, Bellincioni began touring around Italy and the world, appearing in many different operas. 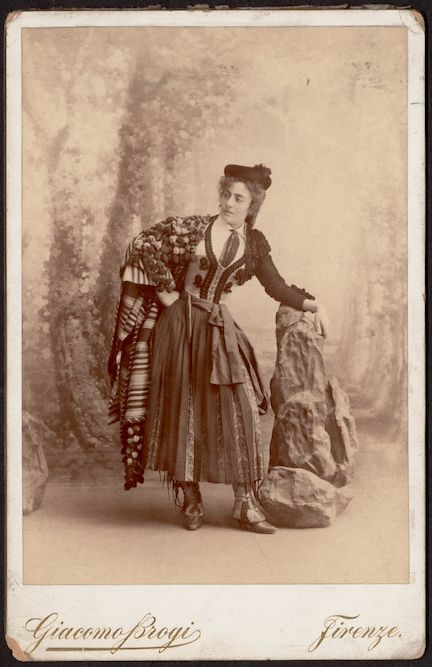 Bellincioni became a world-renowned opera diva who, in addition to performing, composed two opera libretti during her career. Her soprano voice was recorded in the early 1900s, first for the Gramophone & Typewriter Company in Milan in 1903 and then for Pathé in Paris in 1905 (Scott). Bellincioni’s last opera role was the lead in Richard Strauss’s “Salomè” at the Opéra national de Paris in 1911 (D’Amico 201). In her autobiography, she later wrote that “after this creation I realized that I had nothing more to give to art and to the public and that the public had nothing more to expect from me…and, despite the insistent proposals, I said to myself: enough!” (G. Bellincioni 137). She was forty-seven years old. At the end of her musical career, Bellincioni started to teach singing, first in Berlin, until 1914, and then in Rome at the Santa Cecilia Conservatoire.

While there was a close relationship between opera, theater, and early Italian cinema, the presence of female opera singers on screen in the first decades of the twentieth century was not that common. As Elena Mosconi writes, “It is well known that at this time in Italy, many actors made the transition from the theatrical stage to the cinema, in the hope of better financial conditions. Film actresses came mainly from the theatre, where they had done their apprenticeship. But despite the surprising number of theatrical actresses who made their debut on screen between 1910 and 1920… the singers who came from the lyric stage were very few” (340). While we do not know Bellincioni’s reasons for choosing to work in this new field, she appears to have been one of only a handful of female opera singers who made the transition (Mosconi 340-344).

When Bellincioni started to work in film in the late 1910s, she was still quite famous. However, cinema history texts mention her only in passing or, more often, do not mention her at all. One of the reasons for this omission may be that all of the films she wrote, directed, and/or produced are lost and only one film in which she appeared is extant. Contemporary scholars are faced with the difficult task of evaluating and contextualizing Bellincioni’s work as an actress and as a filmmaker using only surviving primary documents, such as film reviews from the period. 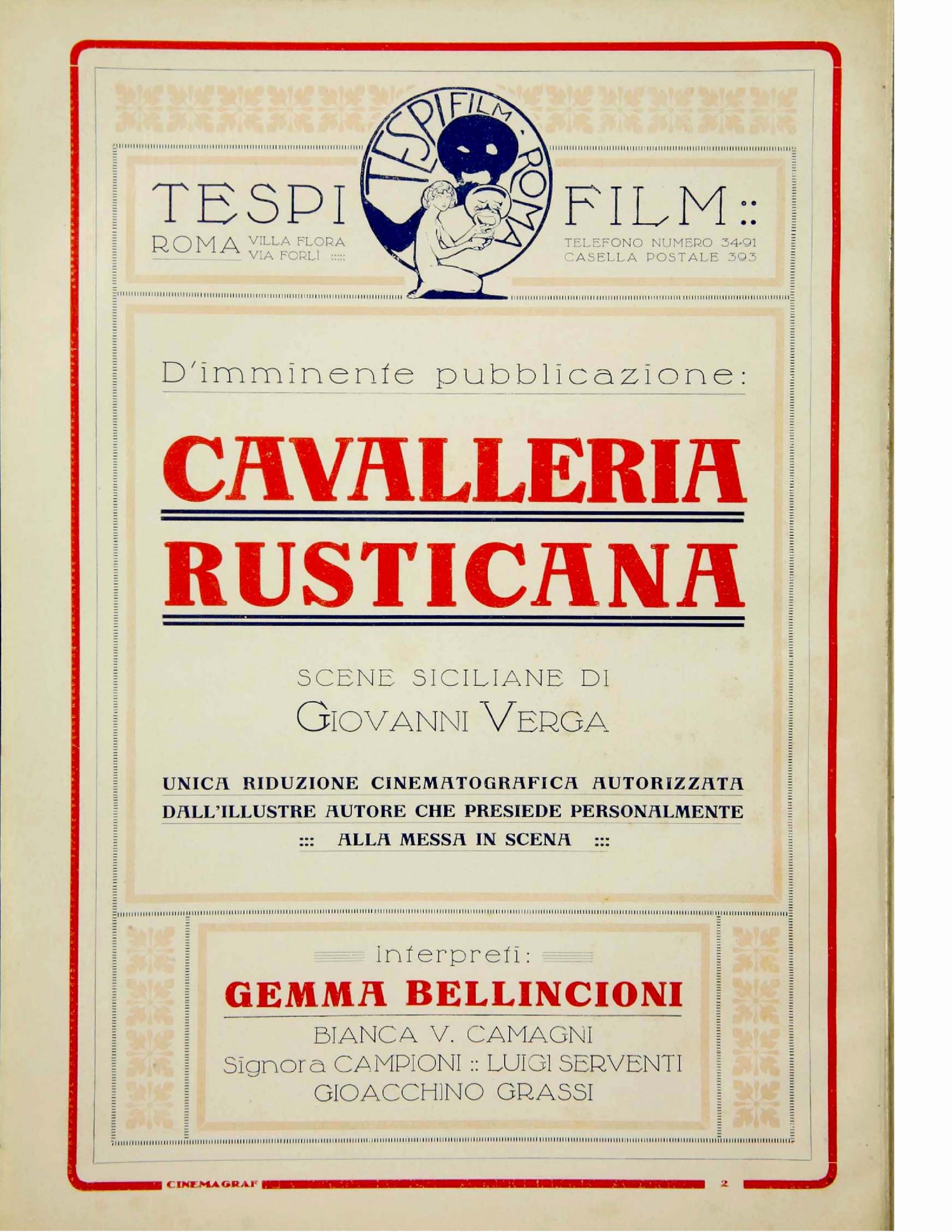 At the age of fifty-two, Bellincioni appeared for the first time on screen in Cavalleria rusticana (1916) and Suor Teresa (1916). Both were adaptations of operas, and both were directed by Ugo Falena at Tespi Film, a film company in Rome. The opera “Cavalleria Rusticana,” by Pietro Mascagni, had been a major success for Bellincioni as a singer when she performed it with her husband, Roberto Stagno, in 1890. In the film version, Bellincioni played Santuzza, the same character that she embodied on the stage. It is not surprising that she chose to make her cinematic debut with an adaptation of this opera or with this character. As Bellincioni recalled later in her autobiography: “Santuzza was a character that I have long dreamed of…which allowed me to reveal my true ideal of art to the public” (G. Bellincioni 108). Unfortunately, the film could not be advertised as an adaptation of Mascagni’s melodramatic opera because the author had sold the rights to another film company, Flegrea Film. Tespi Film dodged this problem by promoting the film in relation to the author of the opera’s literary source material, Giovanni Verga, who had given permission to use his work (Mosconi 342). Having the famous Bellincioni also helped; as Elena Mosconi notes, “the marketing strategy of Tespi was astute: the name of Gemma Bellincioni, considered to be the ultimate Santuzza, was enough to provide a direct reference to Mascagni’s opera” (342).

Cavalleria rusticana is the only Bellincioni film that partially survives today. The extant material, held at the Cinema Nazionale, in Rome, shows us that her acting style is exaggerated in some scenes, similar to the typical melodramatic style of that period, but more realistic and natural in other moments. At the time of the film’s release, critics praised her performance as Santuzza, but the public was not as enthusiastic, reportedly wanting a different actress in the role. According to one critic in Film: “Bellincioni shows all her magnificent intentions in acting, but the film audience wants younger and more charming actresses. Therefore, we have to note that her interpretation was of no interest to the public” (qtd. in Martinelli, Il cinema muto italiano 1916 87). 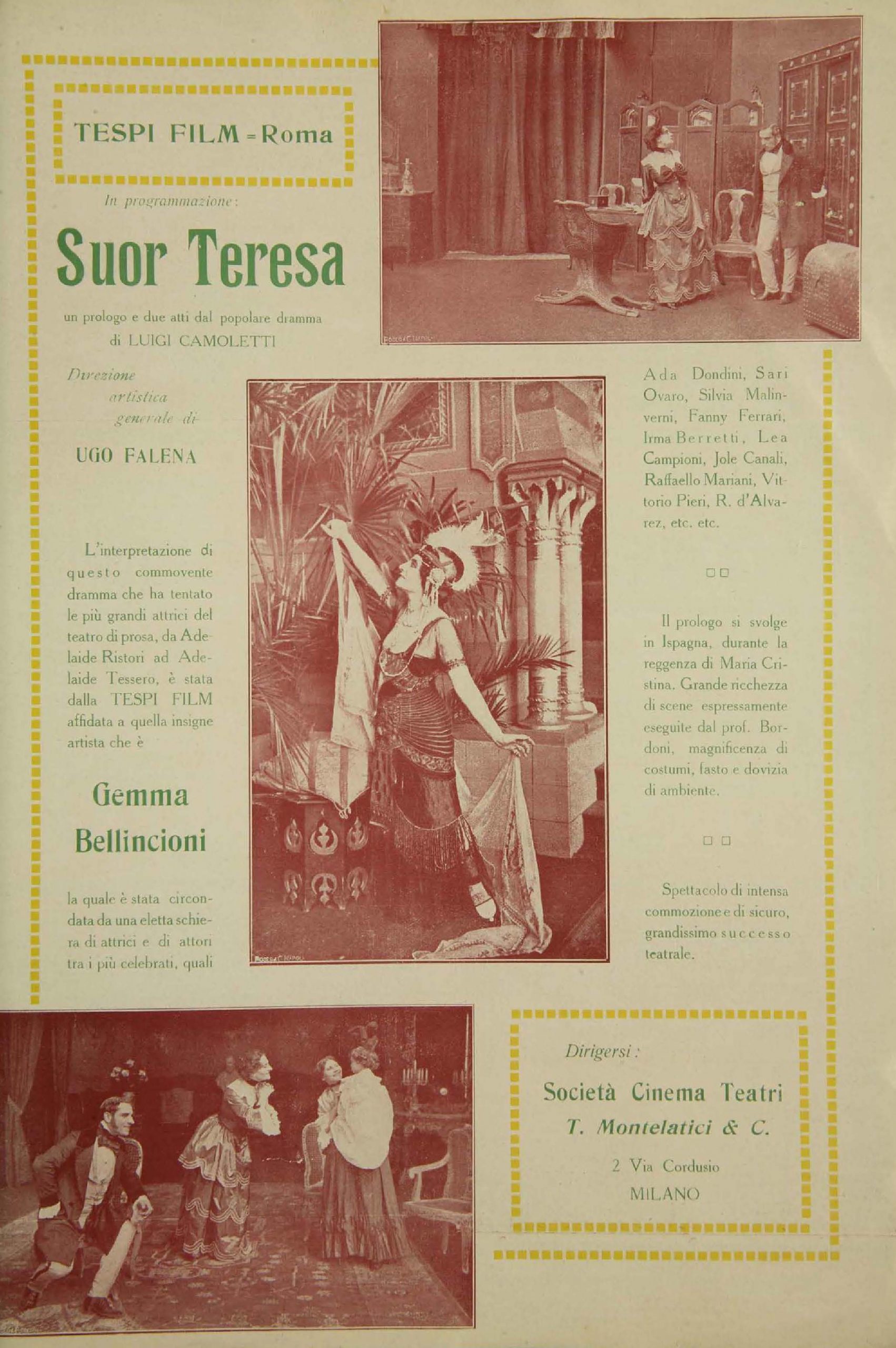 Reviews for her performance in Suor Teresa, the second film in which she appeared, were more positive, however. For example, one critic wrote that Bellincioni’s appearance on screen “leaves…a deep groove in the soul of every spectator” (“Il lavoro della Tespi Film”). A second unnamed critic, writing a year later, observed that “[another] very important element of this sensational success of this film is the intelligent and suggestive interpretation of Gemma Bellincioni. Sober, elegant, harmonious in the gesture, very effective in the expression of the face” (La Cine-Fono). And a third critic noted that “the aching heroine is played by Mrs. Gemma Bellincioni, whose sublime and powerful dramatic art is very beneficial to the film” (Fasanelli). 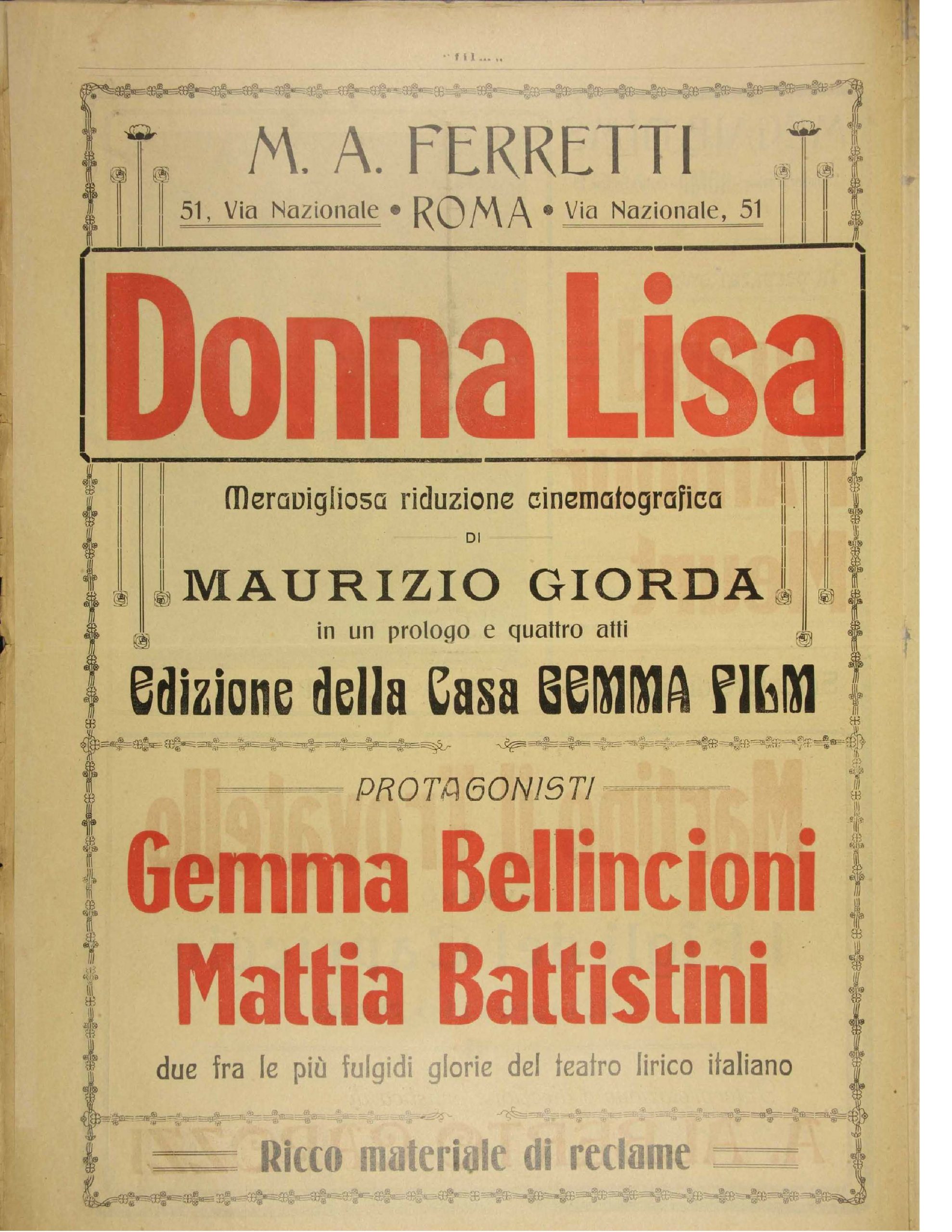 In March 1917, the film press announced that Bellincioni had created her own film company, called Gemma Film, in Rome (La cinematografia italiana ed estera [1917]). The company’s first film was Donna Lisa (1917), which also marked Bellincioni’s directorial debut. This move to directing did not mean that she stopped acting, and she often appeared in her own films. Between 1917 and 1919, Bellincioni produced four films that she also directed (besides Donna Lisa, she directed Il prezzo della felicità, Vita traviata, and La baronessa Daria, all from 1918), as well as two others—Fiamme avvolgenti (1918) and La leggenda dei tre fiori (1919)—directed by Eduardo Bencivenga. Bellincioni was also the screenwriter for La leggenda dei tre fiori. In 1919, her film company changed its name to Bellincioni Film, and Gemma began directing her own scenarios. The first films she directed, produced, and wrote, advertised as “passional [sic] and dramatic,” were not critically acclaimed, but the public viewed them favorably (Martinelli, “Les metteuses-en-scène” 24). 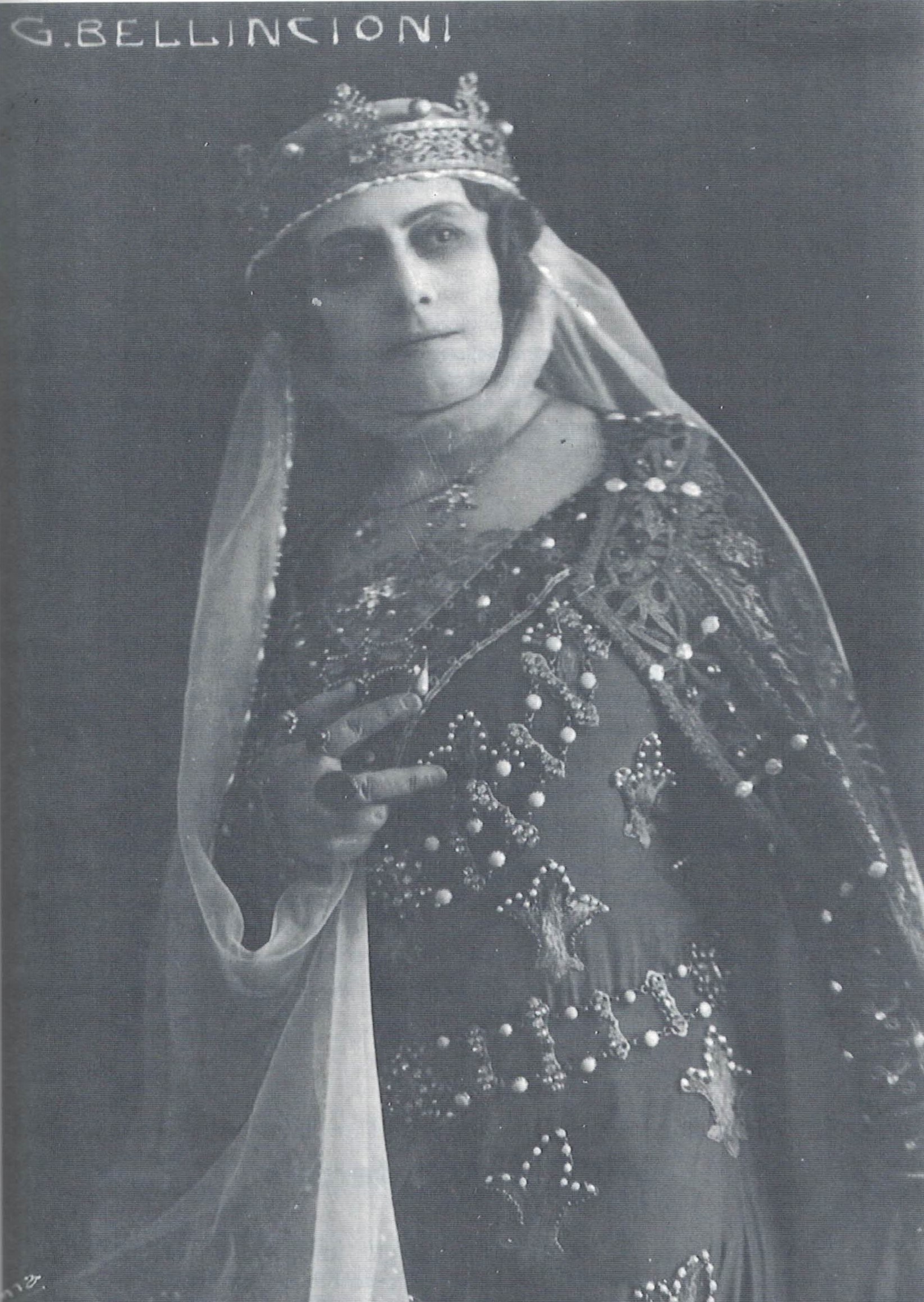 The most popular at the time of its release was Giovanna I d’Angiò, regina di Napoli (1920), which also starred Bellincioni. The scenario for this film is located in the Luigi Chiarini Library at the Centro Sperimentale di Cinematografia, in Rome, and this remarkable document includes numerous photographs and text in French, English, and German. The narrative focuses on a woman who was once a queen. What emerges from reading the scenario is a complex female character, with fears and weaknesses, who must deal with the passage of time, and, consequently, with her decaying beauty and desire to be a mother. Giovanna I d’Angiò, regina di Napoli is the only film of Bellincioni’s that received all positive reviews, and, three years after its premiere, it was reportedly still playing in some Italian cinemas, such as Cinema Edison in Parma (Gianni). The film was appreciated for its thorough historical details and, above all, for Bellincioni’s ability to play the role of the queen from youth—even though she was fifty-six years old at the time—to old age. There were problems with the Italian censors, however, and a scene in which the queen is assassinated by suffocation was ultimately cut, according to the Italia Taglia project database of censorship information (“Giovanna Iª d’Angiò”), although a still from the scene remains in the archived scenario. 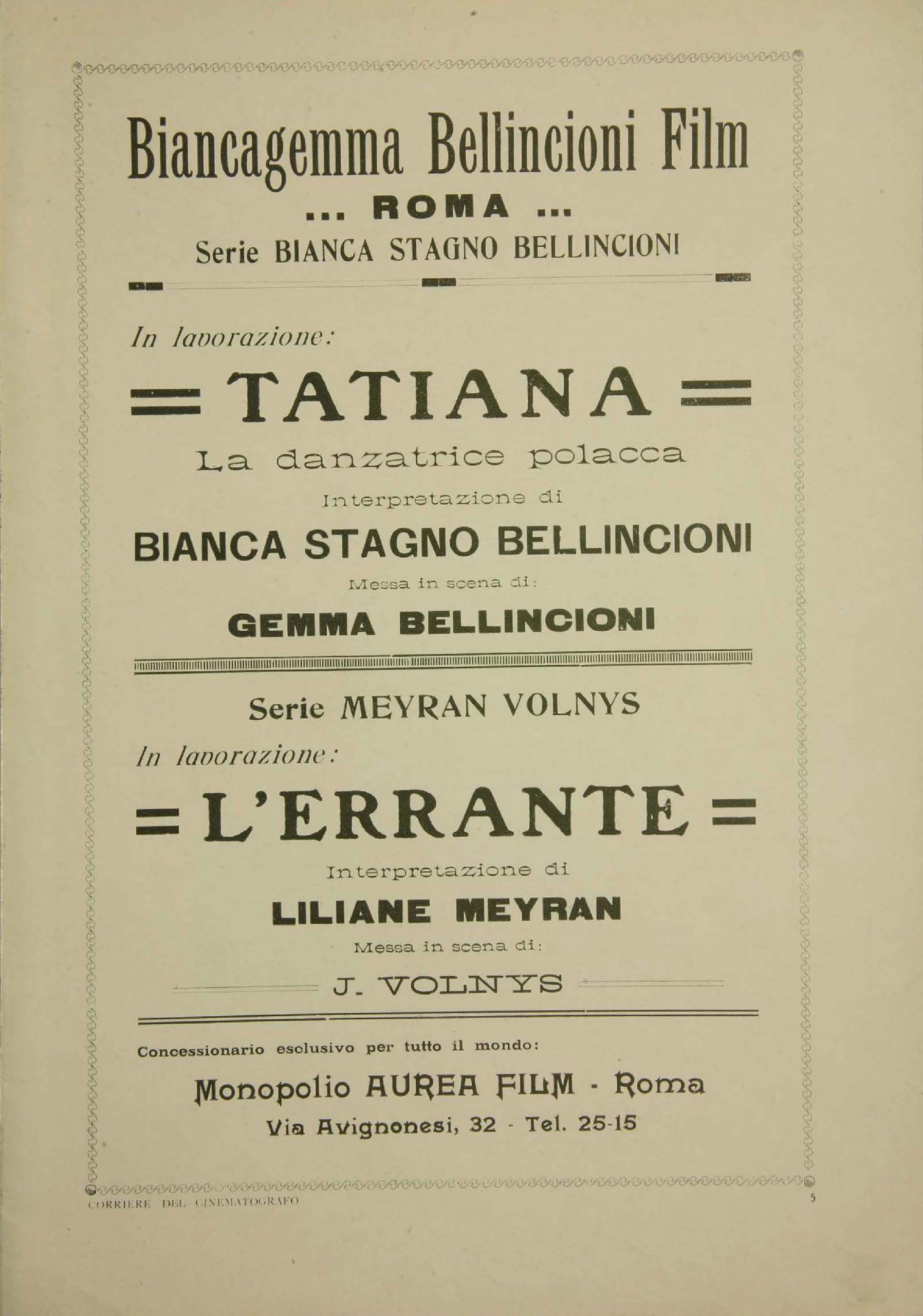 Reviews of these mother-daughter collaborations often focused positively on Bianca’s beauty while criticizing the narrative or technical aspects of these films. Writing about Tatiana, la danzatrice polacca (1921) in La rivista cinematografica, Aldo Gabrielli disliked the subject matter, but seemed to like Bianca’s beauty and Bellincioni’s direction and photography:

This is one of those films that say[s] nothing from the point of view of the subject, but that say[s], as they are [directed], what Italian artistic taste can also be in the cinema. […] The subject says nothing: it creates nothing, concludes nothing, and demonstrates less than nothing, [and] in reality demonstrates something: the cerebral anemia of cinematographic writers. I’m talking about the film only because Gemma Bellincioni has spread such beauty in every shot that I have rarely been able to praise so much in other films. […] [A] film destined to be nothing [became] something thanks to Gemma Bellincioni. (18-19, emphasis in original)

Bellincioni’s directing career effectively ended in 1923 with the Naples-set drama Satanica, which follows a tormented love affair between a poor, young couple. This film also had some trouble with the censors, and two scenes—one depicting seduction and one showing a stabbing—were cut, according to the Italia Taglia project database of censorship information (“Satanica”). After her film career ended, Bellincioni went back to teaching singing, opening a school in Vienna in 1930. She remained there for two years before returning to Italy, first to Siena and then to Naples, where she taught singing at the Conservatoire. Bellincioni’s return to musical education is not surprising given her pre-World War I teaching work (during which time she also wrote an instructional manual for singers that was published in 1912). She died in Naples on April 24, 1950, and is buried in the cemetery of Montenero in Livorno.

Despite the difficulty of reconstructing the plots of Bellincioni’s lost films, it appears that overall, out of the twelve films she directed at her three different companies, at least eight have a female character as the central protagonist. Some of these women show some shades of independence, but others follow the traditional model of womanhood set by the patriarchal society of the time. For example, in Papillon (1921), a frivolous woman is punished with death, and in Liana spezzata (1922), a poor girl cannot marry the man she loves because she does not belong to his social class. The most interesting and complex female character is certainly the protagonist of Giovanna I d’Angiò, regina di Napoli, who was based on the real-life Giovanna I d’Angiò, the queen of Naples from 1343 to 1381 and one of the first European women to reign by hereditary right. That Bellincioni chose to make a film about this revolutionary woman, who became queen at age sixteen, married her lover after killing her husband, and resisted the invasion of her kingdom, is telling. Although the queen was ultimately excommunicated and killed in prison, the archival film script shows us how Bellincioni tried to present a fascinatingly complex woman who faced numerous challenges and adversities.

It is interesting to note that, in 1920, when Bellincioni published her autobiography, Io e il palcoscenico, about her life as an opera singer, she was still involved in the cinema industry. Yet despite this, she did not mention her film work at all. Perhaps she viewed opera as her “real” career and filmmaking as secondary, or maybe she was not fully satisfied with her productions. While her successful opera career seems to have eclipsed Bellincioni’s often poorly-received work as a film actress, director, producer, and screenwriter, her presence in the early Italian cinema industry should be valued because it demonstrates the enterprising spirit of a woman who was not afraid to experiment with a new art form and the different behind-the-scenes responsibilities it offered her.

There is some conflicting information concerning Bellincioni's filmography. This profile has followed Vittorio Martinelli, but when his information differed from film periodicals from the time, the author followed the latter. For example, Martinelli says that Fiamme avvolgenti was produced by BiancaGemma Film (Il cinema muto italiano 1918 79), but the film press of the time credits the film to Gemma Film. We know that Gemma Film existed between 1917 and 1920, so this title likely belongs to Gemma Film.