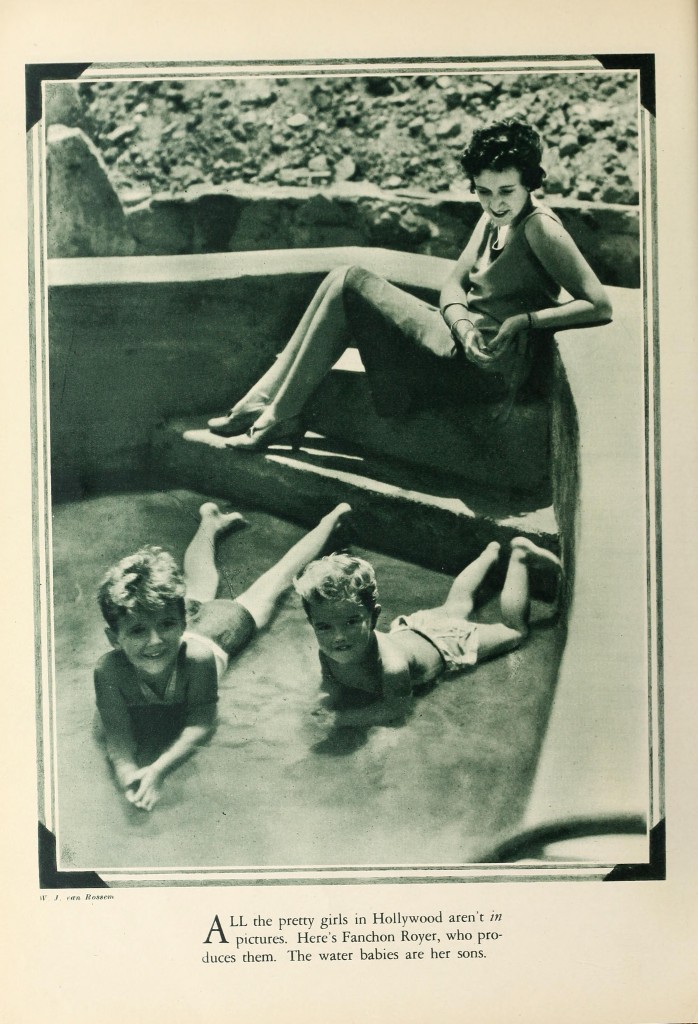 In the 1930s Fanchon Royer was famous for being one of the few female producers in Hollywood, but she got her start in the industry during the silent era as a journalist, publicist, and producer. She was born Fanchon Pauline Royer on January 21, 1902 in Des Moines, Iowa. Her parents, Elwood A. and Jessie Havens Royer, had a contentious relationship and they divorced in 1907, the same year as the birth of their second child, Robert (Royer 1960, 303). She had a peripatetic childhood, moving between her maternal grandmother’s house in Minneapolis, her father’s in Des Moines, and roaming with her restless mother, attending ten different schools in nine and a half years. She was allowed to remain with her father, a prosperous wholesale grocer, long enough to attend East Des Moines High School, where she acted in the senior play and served as the first female editor of the school’s monthly literary magazine, Quill (1960, 303). 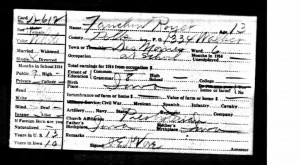 She graduated in 1918 at sixteen and moved with her mother and brother to Hollywood where her mother opened a real estate agency, Royer Realty, while Fanchon took classes in journalism and short story writing at University of Southern California. However, she wanted to act in films so she wrote a letter to Douglas Fairbanks. He replied, arranging a meeting for her with his casting director Jimmy Hogan, who in turn referred her to the casting chief at Famous Players-Lasky Corporation, Lou Goodstadt, who found work for her as a film extra (Tildesley 1929, 100). Royer appeared in Cecil B. DeMille’s 1918 remake of The Squaw Man. She tried to find more work as an actress, running an ad in June 1919 in the trade publication Camera! in which she called herself “a versatile ingénue,” but that career did not take off (15). She later told fan magazine Screenland “that one year in pictures contained more heartbreaks than I have ever known, before or since” (Tildesley  100). So she went to work for Camera!

Royer first appeared on Camera!’s masthead as the Society Editor on January 24, 1920, but just a week later, she was called the Assistant Editor. Two weeks later on February 9, 1920, she married Camera’s editor, Raymond Cannon. Cannon was also an actor; he had been part of D.W. Griffith’s stock company and he continued to appear in comedies like Penny of Top Hill Trail (1921) and dramas like The Printer’s Devil (1923). In September 1920, Royer became Camera’s editor. Most of her articles were unsigned, except for her editorials, which Royer later called “stormy” (1960, 304). Her first was entitled “Today’s Picture” and it addressed current trends in filmmaking:

[A]fter a siege of war pictures which ran the gamut from tragedy to slapstick, the all star cast was initiated with a luxuriously enameled set of sex plays…after a very successful reign, decreasing box office receipts proved to theater owner and producer alike that something was amiss with this type of entertainment…Polished sordidness and foolish stories have sung their swan song in film production (1920, 3).

During the Arbuckle scandal, she was as sanctimonious as most of the other film writers:

We haven’t the slightest idea as to whether or not Roscoe Arbuckle killed Virginia Rappe unintentionally or otherwise; but we have several unpleasant ones concerning the loathsome debauchery that could bring about any such circumstances as those which attended this sensational tragedy…The sooner that every drunkard, dope-addict and degenerate is thrown out of the studios into the gutter where they all belong, the better it will be for each serious minded, self-respecting worker in our enterprise…Hereafter it is imperative that all the entrances to our highly desirable circle be closed save the one that is only to be reached through unquestionable merit, artistic and moral (1921, 5).

After the founder’s death, Cannon bought Camera! in June 1921, and he sold it in May 1922. Royer’s good-bye editorial appeared on May 20, 1922, although she continued to occasionally contribute articles. The magazine merged with Film Tribute on January 5, 1924, and ceased publication on February 16, 1924.

Six weeks after the birth of the couple’s first son, Royer and Cannon tried to break into filmmaking. According to “Pulse of the Studios” in Camera!, they began production for Fine Arts Studios on an untitled farce written by Royer, directed by Cannon, and starring Cecil Holland (14). It was only listed in the publication for one week and was never completed (17). Royer then became a writers’ and actors’ agent, forming a talent agency with actress Martha Mattox, according to the Los Angeles Times in 1927 (A7). She also worked as a freelance publicist, and wrote film reviews for Story World and Photodramatist. Her film reviews were often humorous, as for example, her review of Divorce (1923) started with “Divorce is an awful thing! In fact, one must witness Andrew Bennison’s drama to realize just how awful the subject can be made” (1923, 82). 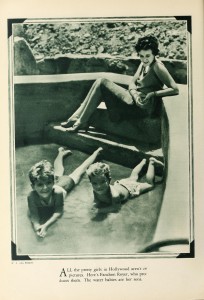 Fanchon Royer and her sons in an “at-home” publicity photo for Screenland, January 1929.

In 1928 the couple decided to try production again, and this time they were more successful. The film was called Life’s Like That and it starred Wade Boteler and Grant Withers. Royer told Screenland about its origin: one day in March, she was waiting for Cannon in a café, and she decided to produce a picture. So the next day she went to her banker and borrowed the necessary money. She said she did it because she refused to stagnate (Tildesley 101). They started production in early May, according to Film Daily (3). The Bioscope described the plot as “…conventional family man indulges in an affair; complications lead to his becoming mayor of the city” (1929, 48). Cannon wrote and directed it. The film was completed and ready for review by June 16  although it did not have a conventional national release through a studio’s distribution network; instead Royer sold individual states the rights to it. This venture led to Cannon getting a contract as a director at Fox Film Corporation and to Royer’s new career as an independent producer. She had discovered she really enjoyed producing, writing later in an autobiographical essay: “Not only the distinction, the work, itself, the building of something out of nothing, was too fascinating” (1960, 306). The Exhibitor’s Daily Review reported that Royer traveled to New York in July to sell a series of features co-starring Boteler and Withers, but they were never completed  (4).

After the silent era, Royer went on to produce over thirty films with her own company, Fanchon Royer Productions. Her films were made quickly and cheaply, in four to six days at a cost of no more than $20,000 (Thomas 1933, 15). She formed a new production company in 1940, Way of Life Films, to make educational and industrial films. After converting to Catholicism in 1943, she began producing religious films. In 1945, she moved to Mexico, where she produced, wrote, and directed two films, Bell Ringer of Antigua  and A Fighter for True Peace, as the Los Angeles Times reported in 1948 (A3). In addition, she wrote a book, The Mexico We Found, about her adventures filming throughout Mexico and Guatemala, as well as her family’s adventures living there. In 1957 her father died and Royer used her inheritance to buy a fruit farm in Teziutlan, Puebla, Mexico, where she retired. She died there on December 13, 1981 (Longden B1).

Life's Like That is not listed in the AFI Catalogue.