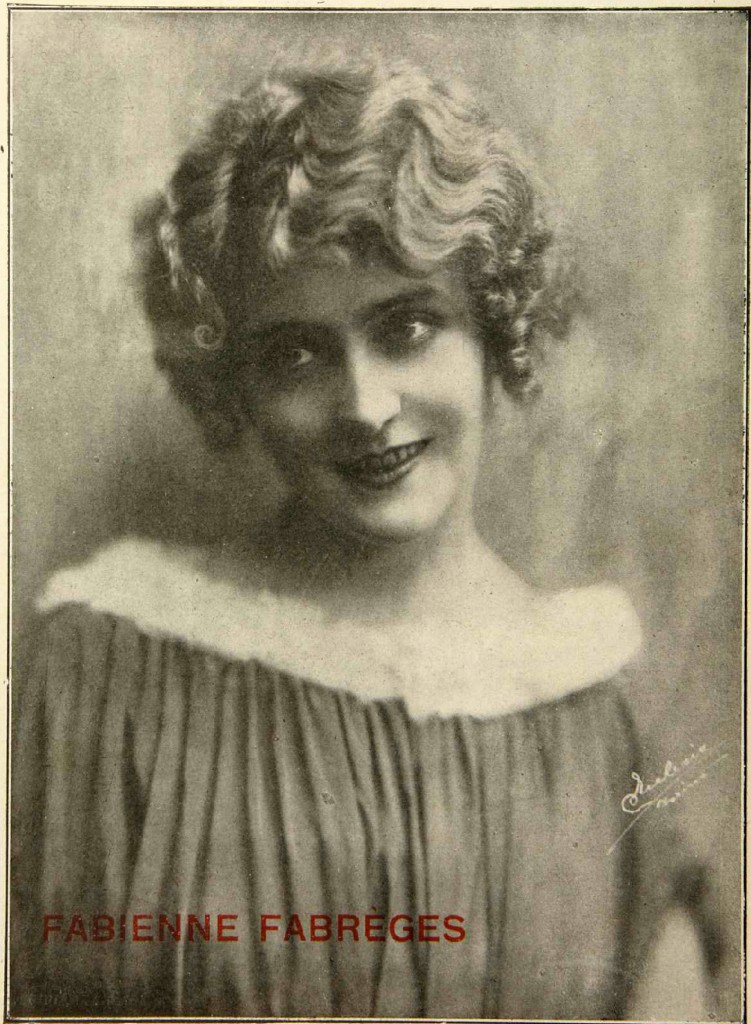 “For me theater has been and still is my passion, the only passion of my life, alive, strong, burning like a fever, and even if it has cost me a lot of sacrifices and a lot of pain, it has procured for me many joys and satisfactions” (“Fabienne Fabrèges” 6). In these words, Fabienne Fabrèges explains the emotional energy that accompanied her throughout her career, which, at first, led her to tour the major theaters of Europe as a theatre actress, and then into performing in more than sixty motion pictures. Fabrèges is one of a generation of young “modern” women who, at the beginning of the twentieth century, were able to move beyond the fixed roles (legislative, cultural and symbolic) imposed upon them in Western society, to pursue their careers (Guerra 2008, 39-48), even if that meant sacrificing family life. In this interview she is remembering the tenacity that she had to maintain during her struggles in order to achieve her objectives, which is also why reviewers generally recognized her as a cultured, intelligent actress with a personal and accurate way of playing her roles. 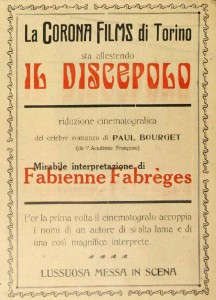 Her film career, between 1910 and the mid-1920s, can be divided into three periods. Between 1910 and 1916, the actress worked in France for the Société des Établissements Gaumont. During World War I, she relocated to Italy, where she was immediately recognized as a leading actress by the Italian film industry, and, between 1916 and 1923, acted in two dozen films. In many of these films she is credited as the screenwriter, and for one of them, also as the director. Finally in the twenties she left the stage and screen in Italy and most likely moved to England, where it seems she carried out some further stage work, and then her career seems to have come to an end.

Historical research on female figures that worked in the cinematographic industry during the silent era is always incomplete and problematic, especially when dealing with the primary sources from that period (Dall’Asta, Duckett and Tralli 2013). Little information has come down to us regarding Fabienne Fabrèges, as well as the many other actresses of that time, despite her well-known and remarkable career. One major source was found to be the specialized cinematographic press, especially since a search of Turin’s commercial and anagraphical archives has yielded no results. Reconstructing a complete biographical profile (which even now is lacking the most basic data, such as dates and places of birth and death) would require archival research in France, Italy and England, which has not been possible to conduct to date. 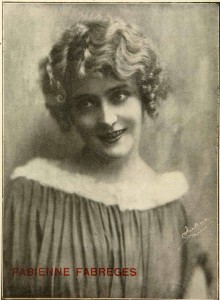 Fabienne Fabrèges made her stage debut in Paris, when she was very young (about fifteen years old), playing Balzac’s “La cousine Bette.” By 1911 her performing skills were already receiving favourable reviews  in  the  periodical Le monde  artiste illustré  for  her role  in “Le Monde où l’on s’ennuie” by Pailleron, which was playing in Geneva’s Théâtre de la Comédie (155), and again in subsequent years for performances with Charles Baret’s company in Strasbourg and various French cities. In her 1925 interview with Al cinemà, Fabienne Fabrèges recalled how, in those years, she played abroad on stages in St. Petersburg, Berlin, London and Madrid (6).

The first steps of her career in motion pictures were taken in 1910 (Bastide 2003, 14-19; Richard 2003, 130), when the actress was hired by Gaumont and joined the troupe of Léonce Perret, lead director of the company along with Louis Feuillade. In the Gaumont period, between 1910 and 1916, Fabienne Fabrèges starred in over forty films, most of them directed by Perret, and, starting in 1913, also by Feuillade. Among these, we note the third episode of the Fantômas series, Le mort qui tue (L. Feuillade, Gaumont, 1913), and the patriotic films by Perret, Une page de gloire (Gaumont, 1915) and L’Angélus de la victoire (Gaumont, 1916). During the war, in 1916, the actress made a journey to the United States, and in August of that same year she moved to Turin (Richard 130), which, at that time, was the city where the Italian film industry was most advanced. Her first Italian engagement took place for Corona Films, in Turin, established in 1914 (Prono 1997, 134-137; Friedemann 2002, 73-78) by a few Jewish shareholders, who, in 1919, subsequently joined the Società Anonima Stefano Pittaluga, then the most important Italian distribution company of the twenties. Under Corona Films she acted in several other films, all directed by Giuseppe Giusti, including such works as Spasimi (1916), Signori giurati… (1916), for which she also wrote the screenplay, and Il discepolo (1917). Reviewers of the time hailed her as a great actress of international standing and praised her refined acting style in these first films (Martinelli 1980, 19-20). Without interrupting her work at Corona Films, she began to collaborate with smaller Turin-based production companies, such as Gladiator Film and Latina Ars, under the direction of Giuseppe Ciabattini and Riccardo Tolentino. During these years her work included such successful films as Wanda Warenine (R. Tolentino, Latina Ars, 1917), Sorrisi e spasimi della menzogna (R. Tolentino, Latina Ars, 1917) and Nozze bianche (G. Giusti, Corona Films, 1917). Not all of her films from this period were produced in Turin: one was produced in Milan by Milano Films (La maschera del destino, U. Gracci, 1917) and another in Rome by Tespi Film (Anna Karenine, U. Falena, 1917). 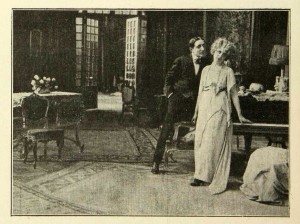 Fabienne Fabrèges’ Italian career began to reach the pinnacle of its success in 1918, when she became the lead actress of the De Giglio Film company, in Turin. Alfonso De Giglio was one of the most important entrepreneurs of those years, beginning in 1912, when he was the head of a very important distribution company, which, in 1918, also became involved in production. De Giglio gave Fabrèges the leading role in both serials Sua Maestà il Denaro and Sua Altezza l’amore (both by A. Borgato, De Giglio Film, 1918). De Giglio’s investment in Fabrèges’ career became increasingly relevant and it is probable that, as was happening with other actresses of the time, he was using his own funds to establish a production company in her name in the city of Turin. Unfortunately, the Fabrèges Film Company, has left no documentary evidence of its existence as an independent company in the commercial archive of Turin (Friedemann 2002, 73-78). At the time, the founding of a new film company in the name of an actress was a common practice. Fabrèges was called upon to act as scriptwriter for many of these films, and in one instance, L’altalena della vita (De Giglio Film, 1919), she was also its director. 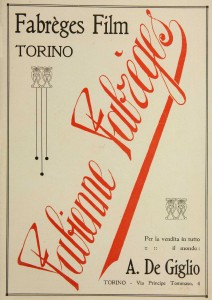 In this film, Fabrèges plays the part of a young runaway named Mietta, who falls in love with a young man, who soon abandons her when he leaves for America. Mietta is then welcomed into the home of an English noblewoman, Lady Hamilton, where she meets an older nobleman, a widower, and soon becomes his bride. The couple then have a baby girl. Meanwhile, Mietta’s former lover returns from America and realizing her new circumstances, starts to blackmail her. The nobleman’s son from his first marriage learns of this and decides to kill Mietta’s old lover in order to defend the honour of his stepmother. After the murder, the nobleman unfortunately convinces himself that Mietta and his son are having an affair and kicks both of them out of his home with dishonor. However, he keeps with him the small daughter he fathered with Mietta. After a period of some years, the latter falls seriously ill and asks for her mother. As a result the nobleman allows Mietta back, having realized in the meantime her innocence. The intricacies of the plot received a cool reception from reviewers, who almost exclusively reserved their praises for the performances of the actors, Fabienne Fabrèges and Alberto Nepoti. 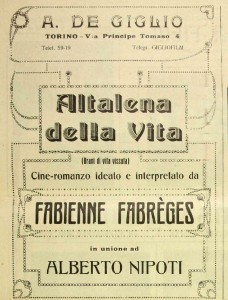 Fabrèges’ last Italian film came out in 1923, and, that same year, according to the periodical Al cinemà, the actress travelled to an isolated castle in Scotland to forget the disappointment of a broken love affair (Piero 2). This news was confirmed by the presence of the actress in a Company called “French Plays,” established in the early twenties by theater manager J.T. Grein, and directed by George de Warfaz, which played at the Queensborough Club Theater, in South Kensington, in London (Schoonderwoerd 213-214; “French plays” 4). Despite the fact that the actress most likely continued her theater career in England, this is a chapter in her life that requires further research. What has been gathered so far clearly presents us with the profile of a greatly talented figure, cultured and refined, with a career that crossed a number of international borders. Fabrèges pursued her career from a very young age and was subject to many struggles and setbacks, such as the alienation of her family’s affections. Despite all of these obstacles, she was blessed with a measure of fortune, and, as she said in Al cinemà in 1925, “Luck has always followed me. I’m the enfant-gâté by chance” (6). 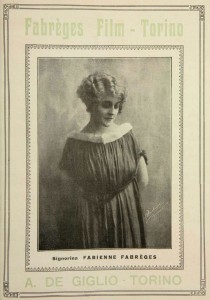 1. Fabienne Fabrèges as Actress and Screenwriter

2. Fabienne Fabrèges as Actress and Screenwriter

The archive information for Léonce aux bains de mer  (1914) and Le printemps du cœur (1916) comes from Bastide 2003. FIAF Treasures only lists FRB as the archive for both and has different years for each film, listing Léonce aux bains de mer as 1913 and Le printemps du cœur as 1915.  Many of the films in this filmography do not appear in FIAF Treasures.