Described by The Cinema in December 1922 as “the Lady Director of Wardour Street” (8), Encarnacion Rosa Scott held a number of prominent positions in the British film renting business in the silent era. Scott was Spanish by birth and moved to London as a child. In 1914 she married Walter Comrie Scott, a British film agent who was a founding director of the American Company (London) Limited.

The company was formed in August 1911 as a manufacturer and dealer in cinematograph films and apparatuses. They were the sole and exclusive agent in the United Kingdom and Europe for the sale of the American Film Manufacturing Company’s films, including the brand names “the sign of the Flying A,” “American Beauty Films,” and “Beauty Films.”Research to date has concentrated on the Flying “A” Studios in Santa Barbara. The importance of the London company and the role of Encarnacion Scott have been somewhat overlooked. 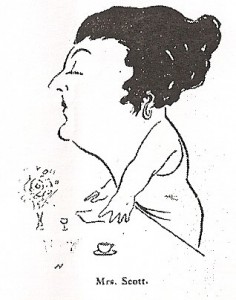 Information concerning Scott and her business ventures is accessible in British trade magazines such as The Cinema and The Bioscope. The Kinematograph Year Book also frequently included Scott in their “Who’s What in the Trade” listing, which not only supplies factual business information, but also provides an insight into her character, and in 1923 noted that she enjoyed motoring and studying languages (271). The National Archives in Kew holds business papers for the London company and the British Film Institute also holds some rental information, along with at least forty Flying “A” prints. Despite the American Company (London) Limited being a British company, further research in American archives could prove valuable. Sifting through American Film Manufacturing Company’s archival materials may uncover references to Scott and the London wing of the American Company that has so far been neglected.

When Walter Scott commenced active service in the Royal Army Service Corps in 1916, Encarnacion became a shareholder in the company and manager of the firm’s factory in Croydon, Surrey. She was widowed not long afterwards in 1919, leaving her to raise their three year old daughter alone and officially assume the role of managing director of the company. The company became a significant part of her life–even inspiring her to name her home “Santa Barbara“ as we learn from Ward’s commercial directory in 1920. As late as 1929, The Kinematograph Year Book reported that “Mrs. Scott holds a unique position in the Trade, for she is, we believe, the only lady occupying the position of managing director of a producing and film printing concern” (280). It is for this position that Scott is best known, but it was also the springboard for several other business projects.

In September 1922, Scott became the managing director of a new film renting firm called the Rose Film Company. With her practical knowledge of running the American Company in London, Scott was regarded as a “valuable asset” by The Bioscope (36). During the company’s inaugural dinner at the Trocadero in London, Scott is quoted in The Cinema as explaining that they were “out to put the best possible films on the market … at the best possible price” (38). They planned to release twenty-six high-class super productions over the course of the following year, including twelve Flying “A” productions. Three months later, The Cinema reported on a dinner dance held in London for the staff of the American and Rose Film Companies where a special presentation was made to Scott “as a mark of respect and affection from the staffs and agents of the company.” She seems to have been held in high regard in the trade for the speeches that evening recognized her “untiring labours” and “wonderful business capacity” (8).

Despite such glowing reports in the trade press, by the end of the 1920s Scott’s business ventures were beginning to fail and she spiralled towards bankruptcy. The year 1921 saw the demise of production at the American Film Manufacturing Company although the headquarters and laboratory in Chicago continued to operate for several years and the American Company retained shares in the London company. Operations in London were evidently still active between 1925 and 1927 as records held at the British Film Institute show rentals to the Film Society during that period. In 1927 the American backers finally pulled out of the London company, and unable to continue business due to its liabilities, the company went into voluntary liquidation in August 1929.

The 1932 Kinematograph Year Book, estimating Scott’s personal financial loss to be £60,000, reported her first meeting with creditors at Bankruptcy Buildings in London where the “debtor” summarized her business activities and losses (191). Before the American Company (London) Limited was liquidated, Scott had formed and managed another company Film Distributors Ltd., liquidated in 1930. Her next move had been to set up on her own as a film renter to try to repay the debts incurred by Film Distributors with the idea of supplying silent films, a somewhat high-risk strategy following the emergence of sound films. This venture also ended in failure, and as a last resort she set up Star Films (Commercial) Limited, which failed to operate. The Rose Film Company which had been set up under such fanfare in 1921 also went into receivership in 1927, but this was omitted from Scott’s statement as the 1928 Year Book reported (196).

One of the challenges in researching Scott is her involvement with several companies in the last few years of her business career, all of which were short-lived. Each of these companies would require further research to ascertain the cause of their demise. The role of the 1927 quota legislation, the impact of the 1929 stock market crash and economic slump, as well as the arrival of sound films may each have played a role. Scott was evidently a determined, energetic, and career-driven woman. Rather than walk away from the industry when things turned sour in the late twenties, she battled on as she viewed her debts as “debts of honour” (“Meetings of Creditors” 191). Despite the unfortunate end to Scott’s career, this should not detract from her successful management of the American Company (London) Limited for at least a decade. Following her husband’s death, Scott was more than simply a company caretaker–she was an active manager and established herself as a prominent player in the distribution wing of the film industry in Britain.

“Who's What in The Trade.” The Kinematograph Year Book, Diary, and Directory. London: Kinematograph Publications, Ltd., 1929. 280.