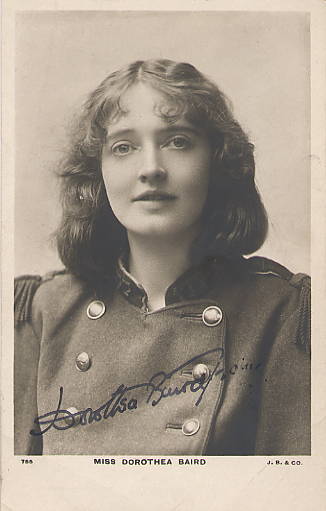 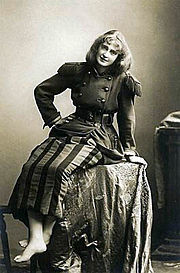 In 1895, Dorothea Baird aged twenty, played Trilby at the Haymarket Theatre opposite Beerbohm Tree’s Svengali, in Paul Potter’s stage version of the Daphne Du Maurier novel Trilby. With Trilby’s charming beauty, infamous hat, low-class humour and bare feet, Baird became a British stage celebrity. Her rehearsals under Tree, who groaned “Give me actresses from the Gutter!” undoubtedly influenced her stage success as comic, lower-class Jenny in The Princess Clementina, filmed in 1911 by William G. Barker (Irving 1967, 213).

These portrayals of feisty, lower-class women, alongside Dorothea’s charitable work for impoverished mothers, culminated in her main contribution to early cinema when she scripted and starred as a health visitor in her film Motherhood (1917), an instructional film for National Baby Week promoting better parenting for lower class mothers. The Successors and The Precarious Crust, both written by her son, Laurence Irving, provide details of her life and career while the Laurence Irving collection at the Victoria and Albert Museum, Theatre and Performance Archives holds original documents. 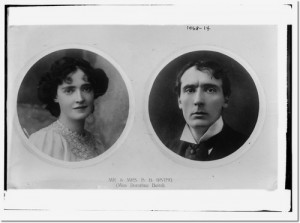 In 1894, Baird was playing in “The Tempest” when she met Sir Henry Irving’s son Henry Brodribb, known as H.B. In 1896, the year of the birth of British cinema, they married. According to The Bioscope in March 1911, her son Laurence Forster Irving was born in 1897, the year Queen Victoria’s Diamond Jubilee was filmed by the cameraman William G. Barker  who would later introduce Baird to cinema (n.p.). Her daughter Elizabeth was born 1904.  The next year, Sir Henry Irving died and Baird and H.B. formed their own theatre company while Barker founded Ealing Studios. By 1910 they were both performing in “The Princess Clementina,” George Pleydell’s stage version of  A.E.W. Mason’s novel. Baird’s interpretation of the role of Jenny provided socially pointed comic relief as suggested by such lines in Mason’s novel: “I am poor…but it gives no one the right to dwarf me,” and “She swore more loudly than she had wept … she struck at his head with her fist…And what do you make of me? A maggot?” (Mason 1925, 139-140). 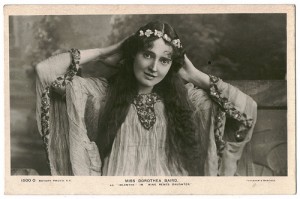 Her first screen role followed in 1911 with Barker filming The Princess Clementina at Ealing Studios as a prestige historical production. He borrowed all the scenery from Queen’s Theatre production which, according to The Bioscope in a March article, was returned quickly “in good time for the evening performance” (n.p.).  According to The Bioscope in the first week in May, Barker supplied the film as an “exclusive”  to exhibitors with expensive promotional material and on terms similar  to those used for Henry VIII (1911) (183). Such was the success of the film that by May 18, The Bioscope reported, there were only two play dates available to exhibitors (288). 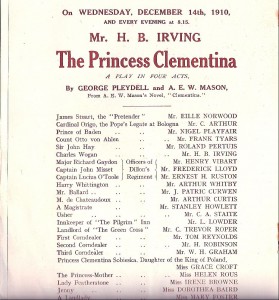 Rachael Low found Barker’s “frankly melodramatic” film, “a wildly impossible romance” (1948, 193). New approaches to melodrama suggest that this assessment  is too dismissive of an important mode of  popular film and theatre. However, given that the film is not extant, any re-assessment would have to rely on existing production stills as well as  reviews of Baird’s performance.  Photographs from the Queen’s Theatre production in 1910, for example, illustrate her comic role in contrast to the melodrama love theme.

In 1913, following a miscarriage, Baird retired,  a development that may  explain why  Viva Birkett was seen in the lead role in Trilby (1914) (Irving 1971, 145).  Her retirement, however, allowed Baird to devote more attention to her interest in family welfare for The St. Pancras School for Mothers, on whose board she had served for several years. The school’s  first report in 1907 indicates that  H. B. was honorary treasurer and that Dorothea generously contributed £2.2.00 while HRH the Princess of Wales gave £5.00, (5, 22, 20). The second report in 1908 shows even more involvement, with Dorothea organizing a tea party and the entertainment for 78 mothers and babies, and raising £15.0.0 with the “sale of Autographs,” and speaking at a prize-giving event. She and her husband further raised £157.9s.11d through a special matinee performance of the play “Charles the First” (21, 25, 7). The school, or “The Welcome,” as it was known, provided mothers with advice and information, home visits, meals, babies’ health care, “parent-craft,” nutrition and housewifery classes. The Provident Maternity Club was formed and the school also held what were called Fathers Evening Conferences. 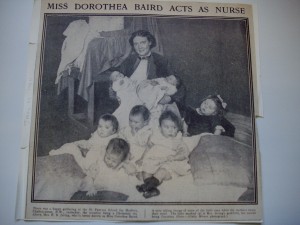 Baird continued with this work as seen in a Daily Mirror photograph on January 11, 1911, of a Christmas Tea at the St. Pancras School for Mothers. She holds her godchild Dorothea Olive in her right arm and looks after the children while the mothers enjoy their meal. In 1913 Dorothea campaigned successfully for election as member of the St. Pancras Poor Law Guardians. On the “Welcome School” committee she used modern audio visual education  which, according to the 1908 Second Annual Report,  consisted of  magic lantern slides for the fathers’ evenings. These slide shows, according to the report, were intended to illustrate, “the evil effect on child-life of bad housing conditions, improper conditions during infancy because, for example, the mother goes out to work” (15). Given this background, it is no surprise that, given the rising popularity of cinema,  in 1917 Dorothea would draw on  her film and theatre experience to script the film Motherhood directed by Percy Nash, co-founder of Elstree Studio. Dorothea knew Nash from his work with her brother-in-law Laurence (Ince 2007, 292-301).  An editorial in The British Journal of Nursing credits her for scripting Motherhood for the first National Baby Week and praises the film for its aims which it lists as not only improving mother and infant welfare but “combating of Disease, Ignorance, Carelessness,” as well as fighting all of  the “evils” seen to arise from “improper” living conditions (58). 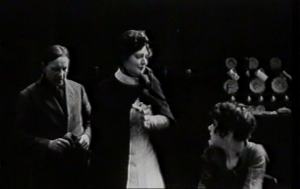 Screenshot, Dorothea Baird as the Health Visitor in Motherhood (1917). 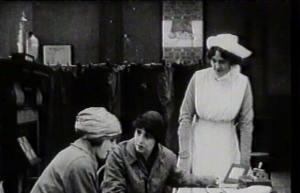 Drawing from the St. Pancras School For Mothers program, the film focuses on the poverty conditions in slum dwelling, showing newly-married Mary (Letty or Lettie Paxton) scrubbing floors,  carrying buckets and coughing in laundry fumes. Returning late from visiting Mrs. Jones, her slovenly neighbour, Mary faces her husband Jack’s (Jack Denton) violent disapproval, causing the health visitor (Dorothea Baird) to intervene, reconcile them, and to introduce Mary to a School for Mothers. Once pregnant, Mary chooses advice from the certified nurse rather than  her grandmother, reflecting the 1917 health visitor goal of teaching women the “art of looking after children” that would counteract the kind of bad advice passed on by an earlier generation (Giles 1995, 112). 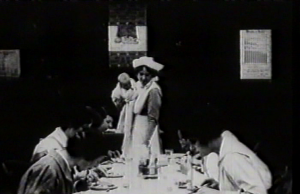 Screenshot, Dorothea Baird (Health Visitor) teaches mothers how to sew at School for Mothers in Motherhood (1917). 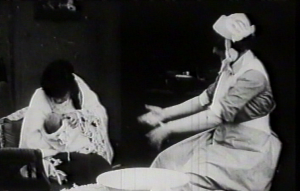 Screenshot, Dorothea Baird (Health Visitor) teaches a mother how to bathe a baby at School for Mothers in Motherhood (1917).

The cinematography on Motherhood works to confirm the period’s official scrutiny of impoverished women. Mary as object of welfarism, is in the front of the frame while Baird is prominent,  standing or moving to oversee the young mothers. Baird in close-up demonstrates directly to camera how to bathe and to dress the healthy baby, reiterating class positions through an instructional register (Giles 1995, 115-6). The character of Mrs. Jones represents the ignorant poor who gets drunk and falls asleep on her baby. The film tableau of her despair at her baby’s death, aligned with sorrowful husband and children, pictorially echoes a D.W. Griffith melodrama. It also illustrates a 1917 concern over infant mortality experienced locally at the St Pancras School for Mothers and nationally, against the background of World War I. According to the June 1917 issue of The British Journal of Nursing: “Of 800,000 babies born England and Wales…100,000 die before the year is out, so that a soldier at the Front has a better chance of life to-day than a baby under a year old in this country.” In the screenplay, the coroner, addressing the jury of male citizens with voting rights, states:“ If there were more schools for mothers these tragedies would not happen.” 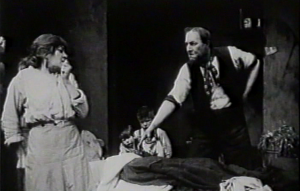 Baird used the film Motherhood, like many middle-class women supporting charity work, to make political demands for social improvements (Giles 1995, 108-113). The Bioscope reports that she  used her fame and the on-screen promotion of Mrs. Lloyd George, The Duchess of Marlborough and Lady Rhonda, for its message directed “To the women of Britain” (602). She spoke on the significance of Motherhood for the National Baby Week plan at an exhibitors’ screening at Trans-Atlantic’s Universal House, again reported in The British Journal of Nursing, arguing that “Citizens were the only people who could really deal with the question, for … the legislators only carried out their instructions …the man in the street should realize his responsibility” (409).  Motherhood’s ending with Jack  returning to his wife and children in their modern house, with bath and hot water, cinematically illustrates the “Homes Fit for Heroes Campaign,” as Local Authorities used Government subsidies to improve homes for returning servicemen in recognition of war service  (Giles 1995, 65-73).  Released July 2, 1917, Motherhood received national press support linked to National Baby Week campaigns and opened to critical acclaim. W.G. Faulkner wrote for The Bioscope: “There is no suggestion of fussy interference, no uplift of the puritanical type resented by the average mother. There is just a nice atmosphere of helpfulness throughout a story, a drama, a real life”  (980-81). Still, years later British film historian Low did not disguise her low opinion of social conscience films which she saw as “tiresomely exhorting action” (Low 197). 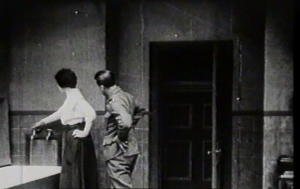 According to Irving, Baird’s letters to The London Times such as “On The Victimisation of Single Mothers” in 1918, indicate her continued support of single mothers despite her husband’s illness (Irving, 1971, 309-312).  H.B. died in 1919 and she died in 1933 at fifty-eight,  and while remembered mainly for the theatrical success of “Trilby,” her welfare work with impoverished mothers was recognised  in The Daily Mirror obituary (n.p.). The London Times reports that in 1937 a print of Motherhood was donated to the British Film Institute by the National Baby Week Council (n.p.). Further research could situate Motherhood in relation to  World War I Home Front propaganda as an instructional, a  drama, or a documentary film. Clearly, it documents class and family welfare reform and thus would have made a contribution to inter-war debates on birth control as well as social Darwinist eugenics. 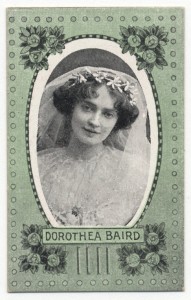 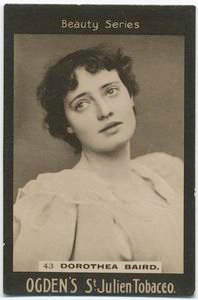 “Barker Films H.B. Irving. The Authors of ‘Princess Clementina’ To Apply for an Injunction to Prevent Films being Shown. An Interesting Point.” The Bioscope (23 March 1911): n.p.

“‘Motherhood.’ Many Notabilities are becoming interested in Trans-Atlantic photoplay which is to be Released During the First Week of July.” The Bioscope (17 May 1917): 602-3.

The British Journal of Nursing. Royal College of Nursing Archives.

FIAF does not credit Dorothea Baird for Motherhood. Additionally, Rachel Low listed Motherhood as 2,000 feet in length while the British Film Institute’s Women and Silent Cinema Catalogue lists it as 1,934 feet.