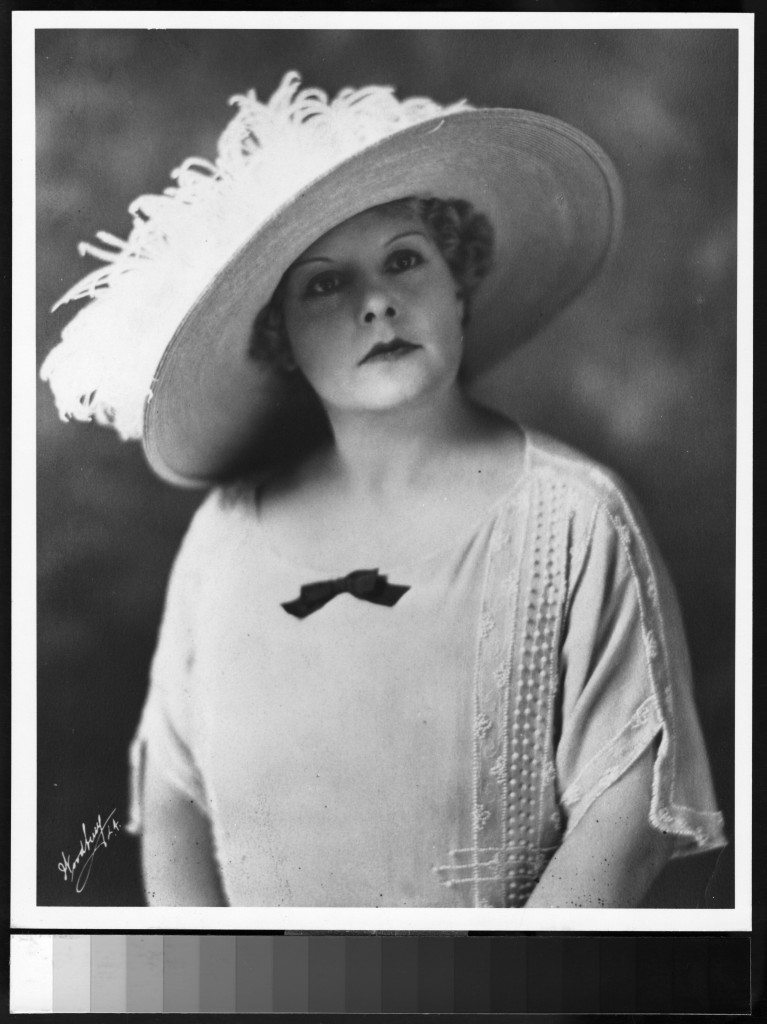 With a film career spanning over four decades—from a vaudeville dancer in an early Edison actuality and a silent comic film actress to an independent producer in the 1920s and a character actor in talkies in the 1930s— Cissy Fitzgerald experienced the vicissitudes of early film history. Born on February 1, 1873, christened Marie Kathleen Cecilia Fitzgerald, and educated in a British convent, Fitzgerald was already famous for her stage dancing and coquettish wink when she made her first screen appearance in 1896. Best known as “The Girl With the Wink,” Fitzgerald primarily worked in theater until her transition to comedic film acting in 1914. She appeared in multiple, trans-Atlantic runs of “The Gaiety Girl,” “The Foundling,” and “The Family.” Although she only appeared in one film role prior to 1914, an Edison Vitascope recording of her dance act in a Boston Keith-Albee show, her stage personality radiated cinematic qualities. From her saucy lingerie dancing to her gleefully incessant winking, Fitzgerald integrated bodily displays with the act of looking while most films were still shot in static, long-framed, proscenium views. 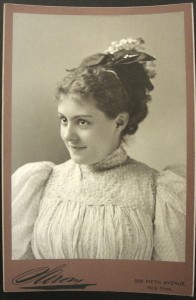 When “she kicked herself” up from $50 to a $350 per week salary in her first American engagement, an unlabeled scrapbook clipping found in the Robinson Locke collection at the New York Public Library advertised Fitzgerald’s exciting range of allures: “Her dancing is distinguished for its seductiveness, its lingerie display, and its celebrated wink accompaniment.” Her first film appearance, as Charles Musser explains,  was viewed as a supplement to her live stage performance (170). The Boston Herald pitched the 1896 Edison recording of Cissy Fitzgerald: “Those who were captivated with Cissy Fitzgerald’s kick and wink during an engagement at a city theater the past season will have an opportunity of passing judgment on the Vitascope’s reproduction of the same; it is said to be capital” (“Keith’s New Theater” 10). Along with a motley cast of boxers, exotic dancers, magicians, circus animals, soldiers, moving automobiles, and state-executed anarchists, Fitzgerald provided a body for displaying the technological appeals of the motion picture apparatus. 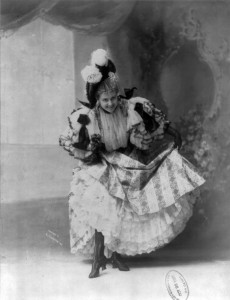 Fitzgerald’s best comic asset, her saucy left-eye wink, was like a fetish object that looked back. Erupting in involuntary winking spasms, Fitzgerald’s trademarked left eye plagued the comedienne in her off-stage, off-screen domestic life.  As her Doctor E.C. Peck explained Fitzgerald’s condition to a New York Journal reporter in 1896, “The wink, which has really become a stage property of Miss Fitzgerald, involves an extraordinary tension of what are known as the orbicular muscles, which surround the eye, and which are used in an exaggerated or tight closing of the eye” (n.p.).  According to Dr. Peck, Fitzgerald’s constant over-tension of these “wheel muscles” in her live stage performances caused her wink to “break loose…and she couldn’t get it back under control again.” As the Journal reporter waxed, “Now the eye winks Cissy.” 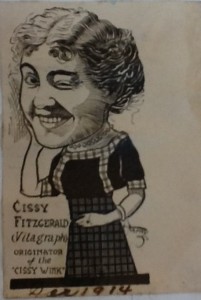 Popular press discourse of the time made no bones about capitalizing on the slapstick potential of Fitzgerald’s medical affliction. The over-strained, nerve-shot muscles surrounding the comedienne’s left eye became popular protagonists of the entertainment columns. The reporter for the New York Journal continued: “The eye seemed to glory in its misbehavior” (n.p.). The automatism of Fitzgerald’s winking muscles provided the perfect alibi for the otherwise decorous comedienne to misbehave in public. Her evil eye would wink at perfect strangers on the train, in the street, and at horse shows, leaving both parties feeling assaulted and ill at ease. Fitzgerald’s left eye came to personify all of the historical contradictions of the comedienne’s stage persona: her saucy inflections on everyday etiquette.

In another unmarked clipping file found in the Robinson Locke collection at the New York Public Library, one reporter described her allures in 1895: “While not strictly beautiful, the English dancer has an extremely piquant expression which is more taking than beautiful. Her large black eyes flash and sparkle in an irresistible way and her charm is compounded of naiveté and diablerie”(“Cissy Fitzgerald” n.p.). The bad object of her own wide-eyed personality, Fitzgerald’s unruly wink provides a generative example for feminist film historians today grappling with the gender contradictions of early film entertainment culture. 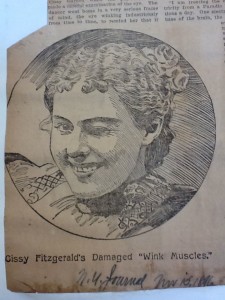 If constant strain and repetitive performance caused the stage comedienne involuntarily to automatize her own physical gestures, then somehow media reproducibility provided a salve to Cissy’s afflictions. Fitzgerald did not make the transition to motion pictures until 1914: long after the dubious nickelodeon years, when the industry had been widely legitimized as a respectable, middle-class institution. Fitzgerald had taken a hiatus from her stage celebrity to make her nuptials in Britain and, according to Moving Picture World, travel the world with her husband, Oliver Mark Tucker (423). They visited India, Africa, Australia, China, and other outposts of British imperialism, until the outbreak of World War I—among other things—drove Cissy back to the still isolationist United States to launch her film career.

She signed a contract with the Brooklyn-based Vitagraph Company in 1914, and played a comedic lead character named Cissy in single-reel larks, including The Win(k)some Widow (1914), Cissy’s Innocent Wink (1915), A Corner in Cats (1915), and Zablitsky’s Waterloo (1915). Like her earlier stage shows, Fitzgerald’s narrative film roles often thematized the involuntary nature of her womanly charms. In Casino’s Cissy’s Innocent Wink, Fitzgerald plays the urban sophisticated wife of a rural deacon. According to a 1915 review in the New York Dramatic Mirror: “Unknown to her husband she has a nervous affliction which takes the form of an unconscious wink” (8). Giving the wink to all the men in her husband’s congregation, Cissy quickly develops quite a reputation against her better intentions. Working simultaneously for Vitagraph, Casino, Broadway Star, and later for Kleine Studios, Fitzgerald appeared in over twenty films between 1914 and 1917. She primarily played comic roles, while occasionally displaying her versatility in films such as, The Esterbrook Case (1915), a mystery melodrama. However, with her automatized facial tics and gracefully awkward corporeality, the actress was really made for comedy. As the Milwaukee Journal put it, “Her face radiates fun and it is on that account that she is so very famous. Cissy’s wink won her fame back in the days of ‘The Gaiety Girl’ and ‘The Foundling,’ and now that she is with the Vitagraph Film Co., she and her wink are more popular than ever” (“Cissy’s Wink Make Her Famous” n.p.). 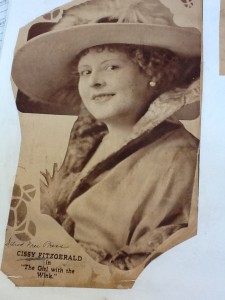 Newspaper clipping,“Cissy Fitzgerald in ‘The Girl with the Wink.’” Courtesy of the New York Public Library.

Sadly, almost all of Cissy’s mid-career silent film titles are no longer extant—with the exception of Look Out Below (1916), an episode of the comic series, The Mishaps of Musty Suffer, that recycles footage from Cissy’s appearance in the series pilot, Keep Moving. After a five year screen hiatus between 1916 and 1921, Cissy starred in five single-reel comedies in 1921, which were produced by her own short-lived, West Coast production company, “Cissy Fitzgerald Productions.” These films, marketed as “refined comedies,”  include Cissy’s Saucy Stockings, Seeing America Thirst, Cissy Invades Bohemia, Cissy’s Economy, and, appropriately enough, Cissy’s Financial Flivver (“Comes Back Cissy” n.p.).  The contents of these suggestively titled films must be left to the imagination, because none of them have survived on their precarious nitrate film stock.

From vaudeville mega-star, to globe-trotting homemaker, to Vitagraph lead player, to short-lived independent producer, Cissy Fitzgerald reinvented herself yet again as a feature film character actor in the 1920s and 1930s. She appeared in dozens of silent and sound films across genres, many of which are still extant. She is perhaps most widely viewed today as Giancinta in Laugh, Clown, Laugh (1928), a Lon Chaney vehicle about a circus clown suffering from uncontrollable bouts of weeping who befriends an Italian count who is similarly plagued by uncontrollable fits of laughing. Although Giancinta is a relatively minor character, we can speculate that forgotten histories of Fitzgerald’s uncontrollable winking must have haunted the production of Laugh, Clown, Laugh. 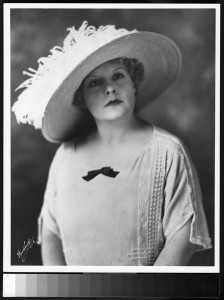 Several years after Fitzgerald’s career swan song—as Duchess Banning in the romantic comedy, Patricia Gets Her Man  (1937)—the actress died on May 10, 1941 in Ovingdean, Sussex, England. In addition to a handful of still extant screen roles, Cissy Fitzgerald survives today through numerous archival documents—including theater and film reviews, fan magazine photos, and scrapbook clippings. As a 1915 reporter for the Milwaukee Journal put it, “Cissy Fitzgerald’s face, once seen, can never, never be forgotten” (“Cissy’s Wink Make Her Famous” n.p.).

Musser, Charles. “A Cinema of Contemplation, A Cinema of Discernment: Spectatorship, Intertextuality and Attractions in the 1890s.” In The Cinema of Attractions Reloaded. Ed. Wanda Strauven. Amsterdam: Amsterdam University Press, 2006. 159-179.