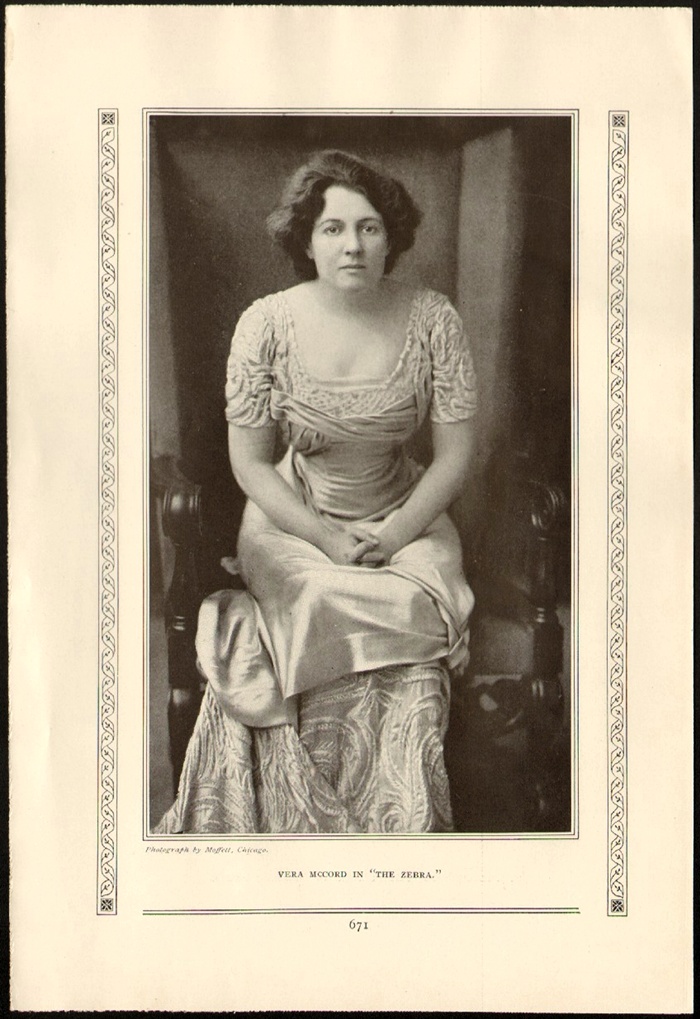 Theatrical actress Vera McCord wrote, produced, and directed her one and only independent feature motion picture, the semi-scandalous The Good-Bad Wife, in 1921. She had had a relatively short theatrical career between 1912 and 1914 in Oakland, California, after a seven-year stint on the stage in London before her one producing gamble. What else we know of McCord’s life is that she was born in 1872 in Marshalltown, Iowa. The daughter of the town’s deputy sheriff, she, her parents, and her two brothers eventually moved to central California, where her father took up real estate. As a young woman, she enrolled at Snell’s Women’s Seminary in Berkeley, and later took a single course at Emerson College in Boston. It was on a trip to England and Paris “under the chaperonage of [one] Lady Lewds,” according to an Oakland Tribune article in 1914, that she developed her theatrical skills (28).

During the years in Oakland, McCord appeared in her only known film. She starred opposite Gilbert M. “Broncho Billy” Anderson in the one-reel Broncho Billy’s Mistake (1913), an installment in the long-running set of Broncho Billy serials. Like many of these Essanay West Coast productions, it was shot in Niles, California, twenty-five miles south of Oakland. While McCord’s movements in the mid-to-late-1910s remain vague, she reveals potentially crucial information about why she made the move back to California from New York in 1912 in what was most likely a self-written “press release” published in the Oakland Tribune. The article, “Is Oakland Girl to Appear Here?” states that “she was playing with Henry Miller when her father became ill and it was necessary for her to cancel her engagements” (28). The 1920 US Federal Census tells us that she had returned to Manhattan with her widowed mother, her widower brother, and his young son, listing herself as single actress.

Piecing together information about McCord is complicated by the fact that her theatre-driven career resulted in a nomadic existence, but also, like so many actresses, she practiced the deceptive art of self-invention. For example, although McCord lists herself in the 1920 US Federal Census as thirty-five years old, which would mean she was born in 1885, the 1880 census lists her birth year as 1872. Doing the calculation, we realize that at the time she made The Good-Bad Wife, she was a fifty-year-old woman portraying herself as thirty-seven.

McCord wrote the screenplay for The Good-Bad Wife, adapting Mary Imlay Taylor’s short story “The Wild Fawn,” which had been serialized in Munsey’s Magazine between September 1919 and February 1920. The American Film Institute online catalog summarizes the plot of the film as follows: “Virginia aristocrat William Carter (Sidney Mason) becomes entranced by famed French dancer Fanchon La Fare (Dorothy Green) while on a trip to Paris. After she trails him back to the United States, William suddenly finds himself marrying Fanchon to save her from deportation.” After returning with her new husband to Virginia, Leonard Frank in the Motion Picture News review explains, “‘Frenchie’ does not forget her old ways, smoking cigarettes before the family, appearing in scanty costume at a church entertainment,” and flirting outrageously (3451). Still, she wins over the stuffy family and the community, but not until after she is stalked by a brutal former husband who is after her wealth, a trial stages her innocence, and her attempted suicide proclaims her honor. One sales strategy was to propose to prospective female audiences that they could see Fanchon as either a “good” or a “bad” wife. A suggested tag line, found in the press materials accompanying the Motion Picture News article is “Don’t fail to see ‘The Good-Bad Wife.’ It will please all the good little wives and charm all the naughty ones” (3451).

Photoplay not only commented on the film’s “scandalous” and “shocking” protagonist, but also its controversial way of representing racial identity (104). The Variety review compliments the comedy talent of the African-American actors Pauline Dempsey and J. Wesley Jenkins and says that what could have been “an insignificant bit part” by Chinese actress Moe Lee is much more (4). Mary Imlay Taylor’s “The Wild Fawn,” which, incidentally, had no Chinese character, follows generally the same story line. It is notable that given her theatrical experience, McCord did not appear as an actress in The Good-Bad Wife. The film’s female lead, Dorothy Green, was a Russian-born actress who made over a dozen motion pictures between 1914 and 1921, several of which were directed by McCord’s theatre coach at the time, Frederick A. Thompson, who would marry screenwriter Frances Marion and go on to become a major star actor and director (Beauchamp 1997, 120–122).

Vera McCord was always cited as an independent producer, and according to her New York Times obituary in 1949, financed her one film through Vera McCord Productions (21). A closer look at the production and distribution path of The Good-Bad Wife tells us something about the challenges that faced independent productions in the 1920s. The film was originally released on June 7, 1920, through the low-budget Film Booking Offices of America (FBO), which suggests that McCord may have arranged for financing through that company (Leonard 3451; Beauchamp 157). After her years in London, McCord might have had ties to FBO, the distribution arm of the British company Robertson-Cole, which underwent a major reorganization between 1920 and 1922. The American Film Institute online catalog, a good source of production and distribution information on this film, starts with the fact that the company shot the film at the Bacon-Becker Studios in New York, and tells us that The Good-Bad Wife had two different releases, eight months apart. After the first run, in October 1920, the distribution rights were again sold to the Walgreene Film Corporation, which immediately turned them over to the Federated Film Exchanges of America. Most likely, The Good-Bad Wife had its New York City premiere around January 14, 1921, and went into its general release in February 1921. Because Federated Film Exchanges was a “states rights” company, which meant that it released films to specific states or regional territories through a system of self-distribution, The Good-Bad Wife was seen in certain small towns throughout the US. Reviews or advertisements appeared in papers in Oakland, California; Mansfield, Ohio; and New Castle, Pennsylvania, to name a few.

Many factors explain the poor distribution of McCord’s film, over and above the challenges faced by independent films exhibited outside the increasingly monopolistic Hollywood studio system. It is easy to see how it probably lost its place on the roster at FBO in the summer of 1920. According to the New York Times in 1928, the company had gone into its first American-made production in May, and within the year moved its hub from New York to Los Angeles, absorbed the Hallmark Pictures film company, and formed a partnership with Joseph P. Kennedy (10). Another factor may have been a very negative Variety review after the January 1921 New York premiere, which not only criticized the editing (“the picture has been badly assembled”), but also disparaged Green’s dancing and the “contention that she is the darling of Paris” (4). More curious, at its first release, the The Good-Bad Wife was six-reels long, and its publicity materials credited Chester DeVonde with direction, citing McCord as the producer, but by the second release, McCord was listed as director, and the film was cut to five reels.

After McCord made The Good-Bad Wife, she apparently responded to its relative failure by founding and serving as club president of the New York-based “National Club for Better Movies,” part of the thriving Better Films Movement—which sought to improve the industry’s image, especially among educators, parents, and public officials, we learn from the New York Times in 1926 (30). The most noteworthy—and newsworthy—turn in McCord’s life was documented in a series of sensational newspaper headlines between 1929 and 1931. She filed a $250,000 breech of promise suit against the Chicago banker Maurice Rothschild. According to the Associated Press account, which was transmitted in regional papers such as Virginia’s Danville Bee across the country. According to The Reno Evening Gazette,  “Miss McCord had alleged that Rothschild… had proposed marriage to her but failed to attend the betrothal party and had not kept the promise of engagement. He said he’d been attracted by her home at Little Neck, Long Island, but disillusioned by her admission that she often quarreled with her brother” (14). The brother, Don McCord, however, appeared at the trial as a witness for Rothschild, testifying to the excessiveness of his sister’s drinking, according to other news coverage in the Danville Bee (6). Once the actress lost her suit, she appears to have gone underground. A glimpse of McCord in her final years comes in an unlikely place—a testimonial blurb in a 1947 book on healthful breathing methods. McCord died of a heart attack on March 2, 1949, at her New York home and studio at 115 East 34th Street, where her obituary tells us she was teaching speech and acting (21).