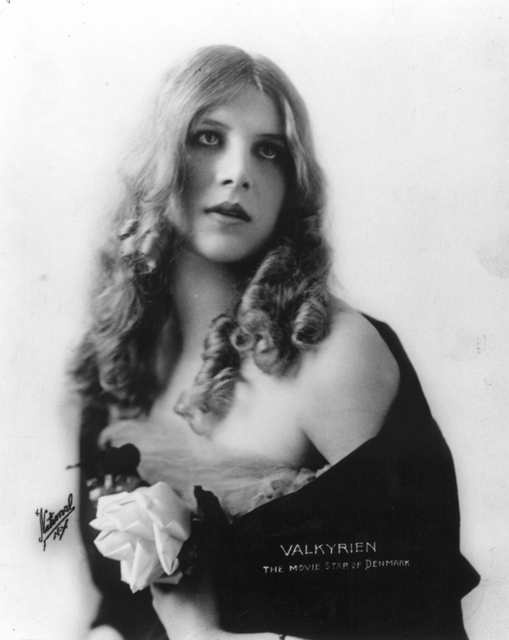 Named after the Valkyrie of Wagnerian lore, the martial warrior maiden who led warriors into battle, Valda Valkyrien herself emerges from the Hollywood press glowing with a mythical aura. Distinguishing between the real Valkyrien and Valkyrien the Hollywood myth is key to a profile of the star. 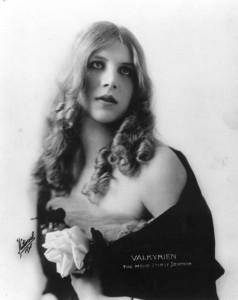 Valda Valkyrien portrait. Courtesy of the Wisconsin Center for Film and Television.

Repeated coverage portrays a talented actress and star dancer, even prima ballerina, of the Royal Danish Ballet, whose beauty so dazzled King Frederik VIII of Denmark in a nationwide beauty pageant in 1914 that he bestowed upon her the title of “Valkyrien—Year of 1914 A.D.—The Most Beautiful Woman of her Race!” (29) thereby making her “the toast of every café, club and home in Copenhagen,” as reported in the Moving Picture World (1246). The same issue reports that when Centaur Film Company producer David Horsley visited Denmark in the summer of 1913, he was so impressed by the Danish diva’s on-screen work that he made her an offer to star in his upcoming feature, an offer that she reportedly refused, for she had left the film world upon her recent marriage to Baron Hrolf von Dewitz, a naval officer and, according to Moving Picture World, an “expert of the first calibre in the finer points of photoplay construction” (624). Gathering war clouds in Europe obliged Valkyrien and Dewitz to relocate to the United States in 1914. While the Baron found himself consumed by his work as a military expert for the New York Daily, Baroness Dewitz was left languishing “alone in a strange land,” whereupon she reportedly resolved to return to motion pictures in order to stave off homesickness, and accepted Horsley’s offer (1246).

In a recent article, “The Strange Case of Valda Valkyrien,” Hans J. Wollstein gives a contradictory picture of Valkyrien’s background and pre-Hollywood film career. Born in Reykjavik, Iceland (and not Copenhagen), Adele Frede, later known as Valkyrien, may have been a student at the Royal Danish Ballet, but was neither a prima ballerina nor premiere danseuse, as she later claimed. A bit part player in at least four of Danish film industry giant Nordisk’s films in 1912, including The New Shoeshine Boy (1912) and The Story of Mother (1912), Adele Frede featured prominently as the hotel owner’s flirtatious daughter in the first film and as a domestic in the second, but was by no means a star in the flourishing Danish film industry.

The myth of Valkyrien, the great Danish star who deigned to favor Horsley while stranded away from her homeland, needs to be challenged. Wollstein argues that it was Horsley who made a star out of the little-known Valkyrien. He spotted her at the moment of budding fame when she won the title of “Valkyrien” in the 1914 beauty pageant, and transported her with her fiancé Dewitz to Hollywood, where he capitalized on the industry’s awestruck attitude towards Valkyrien’s exotic beauty and supposed aristocratic lineage by showcasing the Dane in a series of fifteen one-reeler “Baroness Films.” Dubbed “a special brand of refined comedy,” these films set her on a meteoric career path that had peaked by 1916, but she had sunk into oblivion by 1919, according to Moving Picture World (1246). Valkyrien starred in Vitagraph’s Youth (1915) and played the title role in Pluragaph’s Diana (1916). The Thanhouser Film Company even wrote a three-reeler for her: The Valkyrie (1915). Valkyrien’s other Thanhouser films include: Silas Marner (1916), The Cruise of Fate (1916), and Hidden Valley (1916). For these latter two productions, her husband, the Baron Dewitz, was signed on as “technical advisor.”

At the height of her career, there were reports of the Valda Valkyrien Production Company, but it is not clear if she was ever able to work as an independent. In 1916, Valkyrien left Thanhouser for the offer of a higher salary and top billing from the William Fox Film Corporation. Fox reneged on the second part of the offer, billing Valkyrien below both the title and her costar in The Unwelcome Mother (1916). The furious Valkyrien sued Fox for $25,000 in damages, alleging that she had lost a two-year contract with Thanhouser. The outcome of the suit is unknown, but Valkyrien returned to Thanhouser, where she starred in the well-received The Image Maker (1917) as an actress who believes herself to be the reincarnation of an Egyptian princess. The Thanhouser company folded shortly thereafter, and Valkyrien turned to parts in low-quality independent productions. For awhile, she was under contract to the Clara Kimball Young Film Corporation. Her final film was the red-scare melodrama Bolshevism on Trial (1919).

It would seem that the problem of the lawsuit with Fox contributed to the reversal of Valkyrien’s fortunes by potentially marking her as a troublemaker. The question of Valda Valkyrien is also the question of the way faded European aristocracy played in Hollywood and the particular way immigrants were exoticized in the industry and in the public imagination.

------. Strangers in Hollywood: The History of Scandinavian Actors in American Films From 1910 to World War II. Metuchen, N.J.: The Scarecrow Press, 1994.

Valda Valkyrien’s filmography is based on the standard sources as well as Hans J. Wollstein’s article in Classic Images. It is believed that she appeared in additional films in Denmark, but her involvement can’t be confirmed. It is unclear if Diana (1916) is an alternative title for Diana the Huntress (1916) or a separate short (perhaps made before the latter). IMDb has two separate entries for the films, both produced by Pluragaph Co., and both directed by Charles W. Allen and Francis Trevelyan Miller. According to the Library of Congress, Valda Valkyrien appeared in Diana the Huntress as Baroness Von DeWitz. On IMDb, Valda Valkyrien is listed as the star of Diana. Diana the Huntress is extant, whereas there is no FIAF entry for Diana. Further research must be done to see if these titles are the same film or different versions of a similar topic/story.