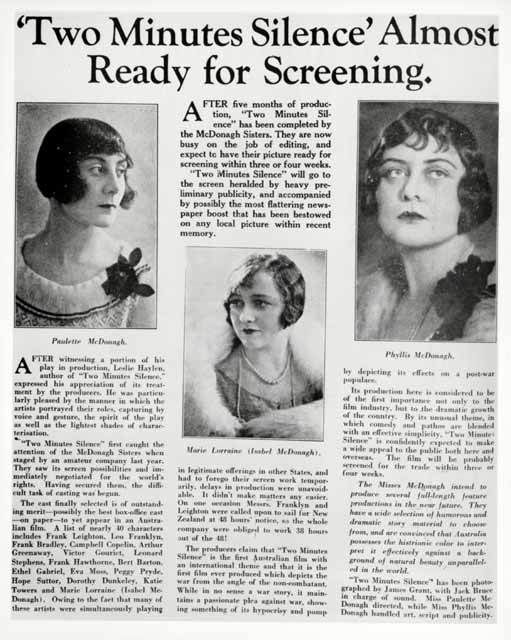 Isabel, Phyllis, and Paulette McDonagh were sisters, business partners, and creative collaborators who made films in Sydney, Australia, in the 1920s and 1930s. Isabel, the eldest, was the actress and star of all their films under the name Marie Lorraine. Phyllis took on the role of art director, publicist, and producer. Paulette, the youngest of the three, was the writer and director of all their films.  The sisters grew up in the upper middle class suburb of Drummoyne in Sydney, Australia. Drummoyne House, the grand family home, was filled with antique furniture and became the movie set and backdrop for many of their films. The home was a hub of bohemia, with traveling theatrical and entertainment people visiting whenever in Sydney.

Isabel McDonagh as Marie Lorraine in advertisement for McDonagh Sisters The Far Paradise (1928). Courtesy of the National Film and Sound Archive of Australia.

Phyllis McDonagh portrait. Courtesy of the National Film and Sound Archive of Australia.

Paulette McDonagh portrait. Courtesy of the National Film and Sound Archive of Australia.

Isabel McDonagh. Those Who Love (1926). Courtesy of the National Film and Sound Archive of Australia.

Paulette McDonagh directing a scene, The Far Paradise (1928). Courtesy of the National Film and Sound Archive of Australia.

Paulette McDonagh directing scene from The Cheaters (1930). Courtesy of the National Film and Sound Archive of Australia.

Advertisement for The Cheaters (1930). Courtesy of the National Film and Sound Archive of Australia.

The McDonagh Sisters’ first film Those Who Love (1926) was privately funded by family money. Being their first foray into the filmmaking business, the sisters engaged the services of P. J. Ramster, who ran an acting school in Sydney. After creative differences with Ramster came to a head, Paulette took over the reins of directing the screenplay she had written with a new-found confidence. The risk paid off, and the release of the film was triumphant. Those Who Loved received rave reviews in 1926 from the publication Everyone’s, which hailed the film and declared that “The result is a dazzling triumph and which is said to be the best Australian film that has yet graced the screen” (n.p.). Everyone’s was positive again three days later, one journalist commenting about Isabel’s performance: “A Sydney girl whose Histrionic ability is remarkable. Her splendid performance ranks with some of the best characterisations ever given to the screen by the world’s greatest stars” (n.p.).

It seems that the McDonagh Sisters had a connection with their audience and Those Who Love was a box office hit, earning more money in the Australian domestic market than the Charlie Chaplin film of that year, The Gold Rush. Unlike other domestic films being made at the time, the McDonaghs didn’t make explicitly Australian films, but were influenced by Hollywood melodrama and also German Expressionism.

As the result of this success, the sisters were able to finance their next feature The Far Paradise (1928). According to Smith’s Weekly, “The Far Paradise has a smoothness and finish rare in Australian Films. Apparently the astute sisters have realised that America has developed the techniques of production to fine art and have been willing to learn” (n.p.). The Far Paradise was also a box office hit, but the distribution arrangement meant that the money didn’t go to the McDonagh Sisters. The bombardment of Hollywood product and distribution strongholds on the domestic market was making it nearly impossible for local filmmakers to compete. By the late 1920s, the family finances were strained as all of their inherited wealth was spent on making motion pictures, and they resorted to mortgaging the grand family home, Drummoyne House.

The Cheaters (1930) was the next film up for production. The sisters were summoned to the offices of Frank Thring, Sr., managing director of Hoyts Theatres, who offered them a lucrative distribution and exhibition deal, but the sisters declined the offer and later lived to regret the decision. They were forced to sell Drummoyne House, but found a private investor, Neville Maken. The Cheaters was entered into the Australian Film Competition, but the rules required the film to be released in sound. The conversion to sound proved to be a difficult process, and they encountered political as well as technical problems. Worse, the screening of the film was an absolute disaster, with the conversion to a Talkie eliminating the intertitles of the silent version.

The sisters persevered with another film Two Minutes Silence (1933), an antiwar film, a move away from their typical romantic melodramas. Sadly, this picture was a failure at the box office, and the sisters never made a film together again. Over forty years would go by before another Australian woman got a chance. When Gillian Armstrong directed My Brilliant Career in 1979, she was the first Australian woman credited with directing a mainstream feature since Paulette McDonagh directed Two Minutes Silence in the 1930s.

Isabel moved to London, married, had three children, and performed occasionally on the stage. Phyllis also married and worked in New Zealand as a journalist, returning to Australia as social editor of the North Shore Times. For a short time Paulette made documentaries, and then she lived out the rest of her days in Kings Cross until her death in 1978.

1. Paulette McDonagh as  Writer and Director, Isabel McDonagh (under the name Marie Lorraine) as Actress, Phyllis McDonagh as Art Director/Publicist

Various introductory clips via the National Film and Sound Archive