The career of Teresita Arce spans the entire Peruvian entertainment industry in the 20th century. Her full name was Teresita Arce-Bouroncle O’Higgins, and her artist-father may have been of Guatemalan descent. She started to sing and dance in her childhood. Early articles from 1916 describe her as a young lady from a bourgeois theatre company. In 1922 her popularity was growing, and the photographer-painter Luis Ugarte asked her to act in Camino de la venganza/Juanacha/La venganza del indio, the first Peruvian fiction feature film. Arce plays the lead role of Juanacha, a young native woman. The Anglo character McDonald, a hateful mine administrator, is a violent exploiter. He is guilty of the death of the wife of a native miner, the “indio” of the alternative title. The engineer is convicted but manages to escape, taking Juanacha to the capital, where he attempts to seduce her, but without success. In the end, McDonald is assassinated by the widowed miner. 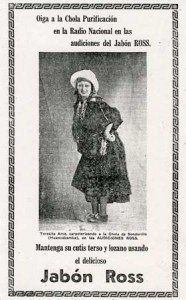 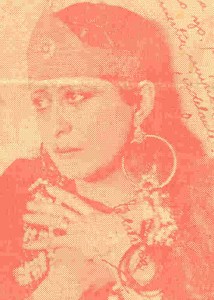 Some years later, when she had become a star in popular theatre and was an entrepreneur with her own company, Arce acted in Luis Pardo (1927) as the virginal bride of the likable bandit immortalized in the Creole music that inspired the film. Unlike the previous film, some materials from this film have survived, allowing us to see the actress on screen. In an interview conducted in the 1970s, the film’s director, Enrique Cornejo Villanueva, recalled that he chose the actress because of her mischievous looks and her strong character, telling an anecdote about her refusal to do kissing scenes. The rest of Arce’s career continued in variety theatre and radio, where she created the character of “Chola Purificación Chauca.” She remained popular well into the 1960s. Her last film project was the aborted feature Las desheredadas de la suerte, which tried to bring Creole culture to the Peruvian sound cinema.