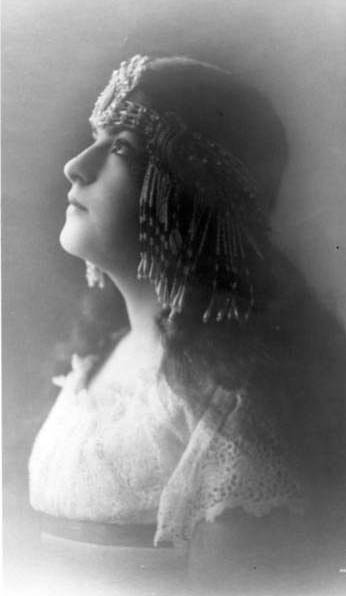 Herminia Pérez de León, who adopted the pseudonym of Mimí Derba when she made her debut as a singer in Mexican theatre at the age of seventeen, was one of a number of theatre actors who made the successful transition to silent cinema.

Beautiful, with a light, sweet voice and a charismatic presence, Derba began her acting career as one of the leading ladies of the Spanish musical genre called zarzuela, then very popular in Mexico. She also acted in political comedies as well as traditional Mexican folkloric plays between 1911 and 1917. After 1917 and until her death in 1953, Mimí Derba starred in over seventy Mexican silent and sound films. In addition, she established her name as a writer, publishing short essays in various magazines and collecting an anthology of these writings in a volume titled Realidades, published in 1921. The end of the Mexican Revolution in 1917 and the ensuing economic and social stability allowed for the development of Mexican feature film production. In 1917, Derba, along with Enrique Rosas, established the Azteca Film Company and produced five films in that one year: Alma de sacrificio, En defensa propia, En la sombra, La soñadora, and La tigresa. In addition to producing these films, Derba wrote two of the scripts, codirected La tigresa, and acted in all except La tigresa. Although no prints of these films have survived, they are preserved to a certain extent through stills and press reviews.

Derba and Rosas’ stated intent was to promote a civilized representation of Mexico in order to compensate for the negative impression generated by seven years of war and revolt. At the same time, Azteca Film also promoted Mimí Derba as a star, functioning both as a sex symbol and an idealized image of the young wife and mother, an image quite similar to that of the Italian diva as exemplified by Francesca Bertini. The press reviews of Derba were generally favorable, and she could easily have become the first Mexican star if Azteca Film had not gone bankrupt at the end of 1917. Disillusioned with the motion picture production business and discouraged in the face of the powerful foreign film industry, Derba acted in only one more silent film, Dos corazones (Francisco de Lavillete, 1919). She returned to the theatre and did not act in another motion picture until her role as a brothel owner in Santa (Antonio Moreno, 1931), which has been long heralded as the first Mexican sound film.

In later sound films, Derba was often cast as the respectable old woman whose young sons are heading down the wrong path. Perhaps because of her age and the roles she was offered, she never received the notoriety of Mexico’s cinematic divas such as María Félix or Dolores del Río.