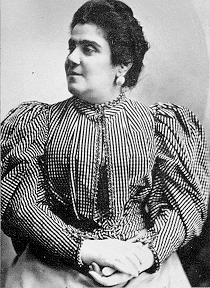 An Italian writer and journalist who was born in Patrasso, Greece, to a Greek mother and Neapolitan father, an anti-Bourbon exile, Matilde Serao’s relentless and eclectic writing was distinguished by her extraordinarily committed professionalism. She cofounded several newspapers in Rome and Naples with Edoardo Scarfoglio, whom she married in 1885. For years, they were the most brilliant and followed couple in Italian journalism. After divorcing her husband, Serao established her own daily, the Neapolitan Il Giorno (1904), which she headed until her death. She was the first Italian woman, and until recently the only woman, to run a newspaper in Italy. 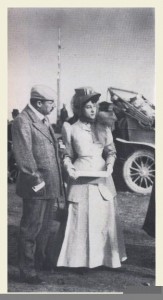 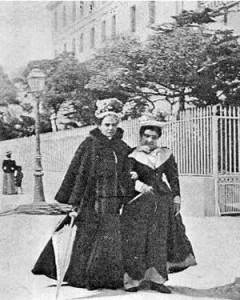 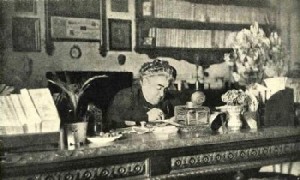 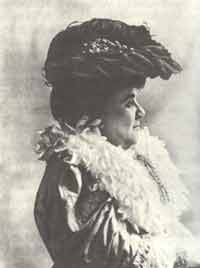 In her copious narrative production, which included more than forty volumes of novels and short stories, Serao depicted the lower middle class and working class life of Naples using a personal, visionary, and spectacular style derived from the southern Realism (Verismo) so effective in her initial literary works. Well received and so esteemed in France that her translator, Georges Hérelle, was also the translator of Gabriele D’Annunzio and Grazia Deledda, she wrote for La revue blanche alongside Marcel Proust and Guillaume Apollinaire and was a regular guest at the famous Parisian salon of countess Rosa de Fritz-James. Her personality and work drew the attention of Germaine Dulac.

A close and long-time friend of Eleonora Duse, whose theatrical plays she frequently reviewed, Serao herself most probably suggested to Duse the novel Cenere (1904) by Grazia Deledda, which Duse then adapted for film as her only cinematic performance (Cenere, 1916).

Serao’s novels were adapted for film, which was the subject, among others, of her journalistic writings, such as her well-known reviews of films like Inferno, Quo vadis, and Cabiria. She also wrote original scenarios. As a regular collaborator of the film magazine L’arte muta edited by the Neapolitan distributor Gustavo Lombardo, she fervently promoted Neapolitan cinema, which was favoured by a cultural environment well oriented towards the Seventh Art. However, Serao never worked with Elvira Notari, the Italian cinema pioneer, who also contributed to the booming film production in Naples, where between 1924 and 1925 more than one third of Italian movies were produced.

Cinema was for Serao a popular art, able to reach a widespread and, at times, uneducated audience. In her 1906 article “Cinematografeide!,” the first article about film written by an intellectual in Italy, she caught the dawn of the Neapolitan enthusiasm for the cinématographe, suggesting, with the suffix of the neologism she coined, the emergence of cinema in Naples as an epidemic, a contagious disease. Serao’s consciousness of cinema as a medium, as a device for production and reception, is also evident in her vision of the relation between literature and cinema: she endorses the artistic dignity of the new language, underlining its capacity to represent the masses and collective movements. In her most significant writing on cinema, “Parla una Spettatrice”/“A Female Spectator Speaks,” from 1916, she demanded that her fellow writers address the new art from the viewpoint of an “ordinary spectator.” She described her own training as watching movies without preconceived ideas, simply bathing in the visual experience as any of those “creatures of the crowd” in the movie hall. Serao felt she shared the same emotional wavelength of the audience, which made her a “perfect spectatrix.” In her appeal to other writers, she urged them to take up topics that would allow common viewers to recognize themselves in what is projected on-screen, to tell stories “go[ing] to the truth of things and to people’s naturalness.”

No traces, however, are left of her original scenarios. The very first, La mia vita per la tua! (1914), was brought on the screen by Emilio Ghione, who also acted in the film. The movie, now lost, was a commercial success but strongly rejected by the critics. Negative reviews, however, did not stop Serao’s creativity and the appeal to adapt her literary works into film.

Resolute and charismatic, Serao was a role model for Italian women during the 19th and 20th centuries. Her paradoxical modernity as an opponent of female suffrage and divorce was not only a contrast with the characters of her own stories, but also with her own personal experience. She was one of the signatories of the May 1, 1925, “Manifesto of anti-fascist intellectuals” by Benedetto Croce, and her opposition to extreme nationalism and war led the fascist regime to reject her nomination for the Nobel Prize, which went instead to Grazia Deledda in 1926.

After she died in 1927, her name fell into oblivion for about twenty years. The rediscovery of Serao as a writer began during the 1940s with the creation of a number of film versions of her novels, such as Addio Amore (Gianni Franciolini, 1942), based on the 1914 Castigo and Via delle cinque lune (Luigi Chiarini, 1942), based on the 1889 work Giovannino o la morte. Other films were planned but not produced, such as La virtù di Cecchina (1884) by Alberto Lattuada or Vite sensazionali, a scenario written by Luigi Zampa about Serao and her husband.