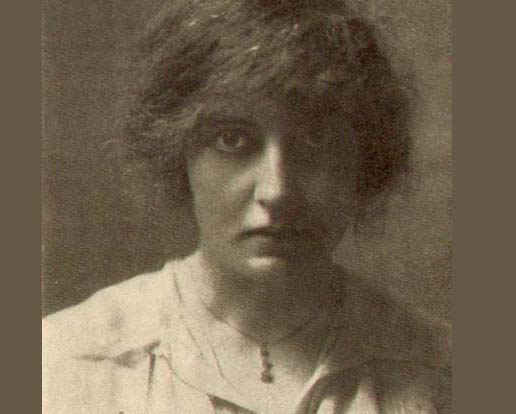 Mary MacLane lived to shock her public. In her 1902 autobiography, The Story of Mary MacLane, she wrote:

Periodically I fall completely, madly in love with the Devil. He is so fascinating, so strong—exactly the sort of man my wooden heart awaits. I would like to throw myself at his head. I would make him a dear little wife…. (28).

Considering her stated desire to marry the devil, her open bisexuality, and her revelation of the most intimate personal details in print, writing and starring in a motion picture was perhaps one of MacLane’s least shocking acts. 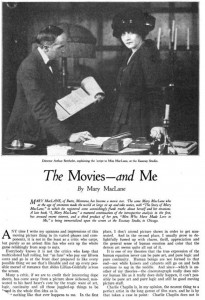 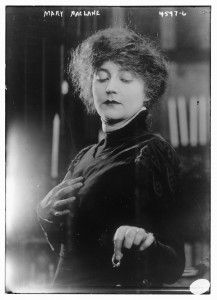 Mary MacLane. Courtesy of the Library of Congress. 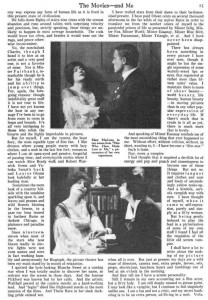 Born in Canada, but settling near Butte, Montana, in her early teens, MacLane gained notoriety in 1902 at the age of nineteen with her best-selling, scandalous, confessional, diary-style novel, The Story of Mary MacLane. Selling over one hundred thousand copies in its first month of publication, her book was reviewed across the country, banned in Boston, and savaged by conservative critics, according to Penelope Rosemont in a recent edition of MacLane’s writings (1–2). MacLane was a self-admitted egotist, and her writing was frank and filled with outrageous thoughts. In the book she chafed at having to live in the desolation of Butte, and wrote at length about her distaste for conformity.

MacLane’s name was rarely out of the newspapers between 1902 and 1917, the publication dates of her first and last books. Particularly after the first book, newspapers tracked her movements as she traveled to Chicago, then eastward. She arrived in Boston, hoping to attend Radcliffe College, but was turned away for lack of scholarship, and finally moved on to New York, where she settled in Greenwich Village and, according to Western historian Cathryn Halverson, was finally able to live the bohemian life she had so craved (66). When public attention began to wane, MacLane would give interviews and write articles capturing the ennui of being a public figure, or, as in a 1910 Chicago Daily Tribune article, she might claim to be looking for a husband in order to create good copy (G3). After contracting scarlet fever in 1911, Mary returned to Butte to write her final novel, I, Mary MacLane, which was published in 1917 (Halverson 71). While this book did not approach the success of her first, it did catch the attention of George Spoor, who ran Essanay Studios in Chicago.

Essanay, by 1918, was on its last legs. The majority of the company had moved from Chicago to Niles, California. Charlie Chaplin, Essanay’s biggest star, had left the company in 1916 to seek more creative control, and Spoor’s business partner, G. W. “Broncho Billy” Anderson, the A of “S&A,” had quit in anger over Chaplin’s departure. Both men went to California, but Spoor bought out his partner Anderson and continued on in Chicago (Barbas 36). The company went through a series of mergers, and historian Jack Spears claims that Spoor imported Max Linder from France to improve the financial situation of Essanay, but when Linder’s comedy didn’t transfer well to American audiences, Spoor, in dire need of a hit, began looking for other alternatives (92).

An admitted fan of the movies, Mary MacLane was delighted when Spoor approached her in 1918 with a multi-picture contract that gave her the opportunity to write as well as to act. The first film would be an adaptation of her 1910 article, “Men Who Have Made Love to Me,” in which she was to play herself. Though the film itself is believed to be lost, the plot can be pieced together from contemporaneous reviews by James McQuade in Motion Picture World and Peter Milne, who wrote for the Motion Picture News in 1918. The original article followed MacLane’s relationships with eight men who embody the flaws of the average male and represent popular types: “The Callow Youth,” “The Literary Man,” “The Bank Clerk,” “The Prize Fighter,” “The Absinthe Drinker,” “The Middle Aged Gambler,” “The Baronet’s Son,” and finally, the adulterer, here “The Husband of Another.”

To streamline the script in the adaptation, MacLane removed the gambler and drinker roles, which would have invited trouble from censors as at the time absinthe and gambling were illegal in the US. In the original article, MacLane does not describe how the relationships end, which meant that the original didn’t provide enough dramatic structure for either a short or a feature-length film. She solved this problem, for instance, by enlarging the role of the Baronet’s Son so that when the Mary character tires of him, and he tries to force his attentions on her, she can be saved by the Prize Fighter. Although in the article Mary falls for the Prize Fighter, for greater dramatic flair the film gives the Prize Fighter a girlfriend who begs Mary to leave him, which she does. Like his character in the article, the Literary Man is too domineering, but in the film he also fails to respect her writing talent. The idealistic Boston Bank Clerk, whom Mary finds too boring in the article, leaves her in the film when he discovers that she smokes and drinks. Finally the Husband of Another, who in the article is a weepy sap desperate for Mary, becomes in the film a brute who tries to force himself on her. All of the men in the article are obsessively in love with the Mary character, but none are abusive rakes; in the film, however, Mary is attacked by two of her five suitors in harrowing scenes. To connect each story, Mary appears, languidly smoking while addressing the audience (via title cards) about the trouble with all men. In the final scene, Mary, again addressing the audience, questions whether true love really exists, and though her French maid says “Oui,” Mary still has her doubts.

Mae Tinee of the Chicago Daily Tribune noted in a late 1917 article that the film was highly anticipated (C3). When finally released, however, most of the reviews were not positive. Tinee was fairly scathing: “[MacLane] on the screen is eloquently expressed by the minus sign. She looks and acts like a headache.” Not stopping there, she claims that MacLane’s only talent is the ability to look good while smoking (14). Reviews for the film were not uniformly negative, however. In his review for Motion Picture World, James McQuade credits both her performance and her writing, although one wonders about the scarcity of the actress-writer phenomenon: “It is the first time in my remembrance that I have seen on the screen author and actress concentrated in the same person” (525).

Ironically, in many ways, the film was MacLane’s downfall. Essanay merged with Vitagraph, Lubin, and Selig in late 1918, and Spoor decided to cancel the multiple picture contract with MacLane after the failure of Men Who Have Made Love to Me. MacLane publicly declared that she hated her acting in the film, but in late 1919, she was arrested for stealing the dresses that had been used in filming. The studio dressmaker had made numerous gowns for the actress, valued at $1,025, and MacLane claimed she had absentmindedly forgotten to pay for them, but she also refused to return them. In a 1919 Los Angeles Times article, she claimed jail might do her good, stating, “I am writing another book to pay for these stupid dresses.” Continuing her thought—and ever the egotist—when asked what the topic of her new book would be, she replied, “Why myself, of course! What else could I write about? What else is more interesting?” (17). MacLane’s obituary, however, states that she was financially ruined when she was locked out of her apartment for nonpayment for the dresses, and her once-popular books fell out of favor in the flapper culture of the 1920s (3). She moved to a black neighborhood on the South Side of Chicago, where her companion, a black artist named Harriet Williams, cared for her. At forty-eight, Mary MacLane died in utter obscurity, surrounded by hundreds of newspaper clippings.