Writer María Isabel Sánchez Concha—or Belsarima, or Marisabidilla—in Lima’s small cultural environment of the 1910s, moved between drawing room conversations and huge intellectual gatherings that took place in prominent theatres. These activities were fully detailed by illustrated magazines such as Variedades and La Crónica. Sánchez Concha’s flamboyant personality and her strong writing helped promote the nascent feature film industry in Lima, starting with the release of Negocio al agua (1913) by the production company Empresa del Cinema Teatro. That year, the distributor Compañía Internacional Cinematográfica decided to produce Sánchez Concha’s script for Del manicomio al matrimonio/From the mental hospital to marriage (1913). They entrusted the camerawork to the French photographer Fernando Lund, who had already worked for the emerging companies La Crónica and Teatro Olimpo.

The national feature film industry began as an initiative to fund the work of young, talented Peruvian playwrights, thus establishing continuity with Lima’s modern theatre. The hope was to attract moviegoers to theatre and vice versa, a common practice since 1909. Following the standards of the period, the actors were cast from among society’s youth, and included Sánchez Concha’s brothers. 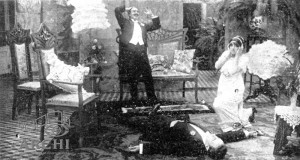 Del manicomio al matrimonio is a comedy of errors. Edmundo Alamares, a dedicated writer, falls in love with his cousin, who is also his father’s student. He manages to give her an engagement ring before her brother beats him up and he becomes mentally unstable. An unscrupulous doctor puts him into a mental hospital with the sole aim of making money from his family, but with no intention of giving him any kind of care. But the lovesick Edmundo manages to escape. With his girlfriend’s help, he exposes the doctors and is finally reconciled with his future brother-in-law. The film ends with the couple’s marriage.

The film—together with other stage pieces—was exhibited on July 11, 1913, at the Teatro Municipal in a gathering organized by women. The press emphasized the success of the showing. Little information on films written by Sánchez Concha has been published. However, her son Enrique Pinilla inherited his mother’s versatility. He was a musicologist, audiovisual director, film critic, and soundtrack composer of several Peruvian sound era films, as well as founder and professor of the Escuela Superior de Cine y Televisión de la Universidad de Lima.