Laura Eugenia Bayley was born in Ramsgate, England, in 1864. With her three sisters, Blanche, Florence, and Eva, she performed as part of J.D. Hunter’s Theatre Company at the Brighton Aquarium. When she was twenty-four, Laura married George Albert Smith. They had two children, Harold Norman, born in 1889, and Dorothy Eugenie, born in 1890. 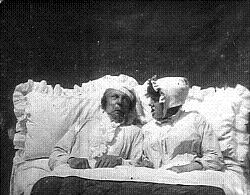 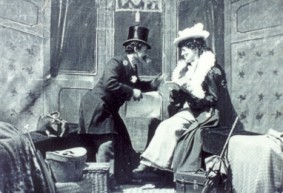 Screenshot, George Albert Smith and Laura Bayley in The Kiss in the Tunnel (1899).

In 1897, G.A. Smith decided to enter the early filmmaking fraternity at the Pleasure Gardens, which they ran at St. Anne’s Well in Hove, near Brighton. G.A. Smith not only produced films and sold copies of his own productions, but also supplied a photographic developing service for other filmmakers. He was involved with Charles Urban, who managed the Warwick Trading Company. They developed, along with others, a cinematograph camera, the Biokam, for the amateur home market, which had film lengths of twenty-five feet with a rectangular space for the sprocket between each frame, situated at the top. The 17.5mm film was half the length of the standard 35mm, and the aim was to encourage customers, particularly women, to shoot their own films. The Biokam was also a printer and projector. In G.A. Smith’s Cash Book, which survives, the entries for the Biokam are given under the initials “L.E.S.” for Laura Eugenia Smith. The entries range from July 29, 1898, to May 21, 1906, and indicate that over 1,000 Biokam films were marketed by March 1900:

On October 14, 1899, G.A. Smith gave an interview to the Brighton Herald about the Biokam, which had been launched on the market that year. He stated: “Films are being made for this [Biokam Camera] that will cost only 3s/6d a minute.” He referred to Bayley, then Laura Smith: “Then Mrs Smith came in to borrow the identical camera and to go off and photograph the waves breaking over the Hove sea wall” (2). In June 1899, J.K. Cramer-Roberts in an article for The Golden Penny described in detail the workings of “the Biokam,” which were supplied by the Edison-Bell Phonograph Company. It included a photograph of a woman, in the mode of the amateur, taking photographs with the Biokam. During this Biokam period, Laura Bayley also appeared in her husband’s films along with their two children, and a number of these films were made as Biokam subjects for which she was responsible. Some of these shorts survive at the British National Film and Television Archive. Mrs. Smith also appeared in some of the Kinemacolor test films made by G.A. Smith between 1906 and 1908. Laura Bayley ’s last three entries in G.A. Smith’s Cash Book relate to “Rowe’s Cash” between December 19, 1907, and October 8, 1908. This appears to mark the end of her involvement in the early film industry.

Laura Bayley is credited as Mrs. George Albert Smith or Laura Bayley. In some instances she may not be credited for her appearance in her husband’s films.