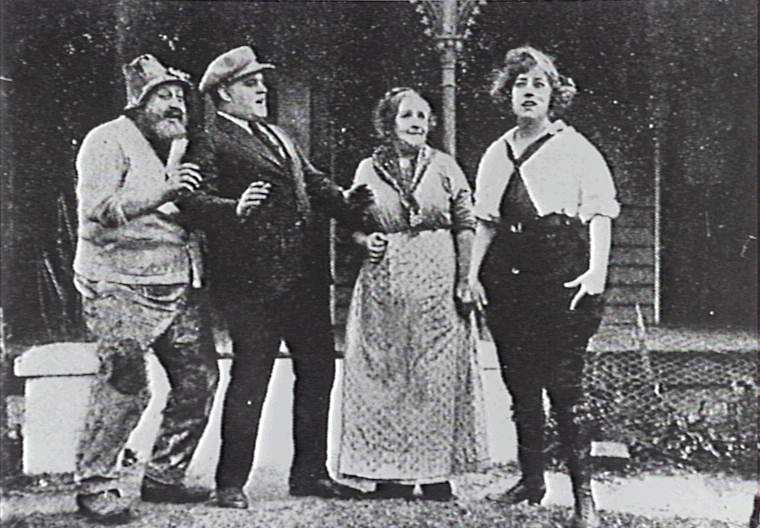 Catherine Clarissa Jones was born in England and migrated to New Zealand as a child. She married William Henry de Saxe in 1884, and their only child, Florence Adrienne, was born at Christchurch on December 5, 1884. William de Saxe died in 1899, and she died in 1939 as Catherine Clarissa Black, but there is no Australian record of her second marriage to vaudevillian Elton Black.

Only so much can be gleaned from the official records. A rather different story emerges from media reports about theatrical entrepreneur Kate Howarde—her professional name throughout a long career. These records note her commanding physical presence, charming manner, and soft speech, as well as her formidable organizational talents, fierce independence, and pluck. They also demonstrate her acute publicity skills and her nose for a good story. For instance, on January 15, 1929, the Australian Woman’s Mirror gave her year of birth as 1869, making her talent appear precocious—her stories published in the Wellington Post at age nine, her children’s pantomime publicly performed at age ten, and her own theatrical company by age seventeen (12).

By the late 1890s the Kate Howarde Company was based in Australia and reported to be touring extensively through New Zealand and all Australian states, performing mainly in country town halls and tents according to Harold Love (120). As well as managing the tours, including controlling finances, she directed the performances, performed herself, and wrote much of their material, including sketches, songs, and pantomimes. She also copyrighted several serious plays, although it is not always clear which of her plays were entirely original and which were Australian adaptations of mostly American works.

The Kate Howarde Company included her two younger brothers, Louis and Albert Howarde, and her sister Billie, who later married Harry Craig, also of the company. It was Billie and Harry Craig who kept the Kate Howarde Company touring in Australia during Howarde’s first extended trip overseas. She traveled to San Francisco in 1906, where she was reported by the Australian Woman’s Mirror to have lost all her playscripts in the earthquake (12). She then moved to New York, where she had a play pirated by an American theatrical agent. However, Howarde was able to support herself in New York for some time writing theatre reviews for newspapers then going on to London. It may have been during this trip that she married her second husband, Elton Black, who had been with the company from about 1904 and returned to Australia with Howarde in 1909. From 1914 to late 1917, at a time when suburban theatrical companies were not common, the Kate Howarde Company successfully presented weekly-change repertory at the National Theatre in Balmain, Sydney. The fare included Howarde’s own melodramas in 1914, “The White Slave Traffic” and “Why Girls Leave Home.”

Kate Howarde separated from Elton Black around 1918 or 1919, just before her greatest theatrical success—the bucolic comedy “Possum Paddock,” which she wrote, produced, and presented. This toured country areas before opening in Sydney at the Theatre Royal on September 6, 1919. The huge success of the play, focusing on the money and romantic problems of a bush family, mixing sentiment with farce, encouraged Howarde to turn it into a motion picture. This she produced and, with Charles Villiers, cowrote and codirected. Many of the original cast returned, including Howarde herself as the widow Nella Carsley. Her daughter, using the stage name Leslie Adrien, took the female romantic lead, originally played on stage by Rose Rooney. The New South Wales censor required the excision of a scene in which an unmarried mother imagines drowning her baby, but the film was released successfully at the Lyric Theatre in Sydney on January 29, 1921, and was exhibited throughout Australia and New Zealand (Pike 137). Howarde later explained that because she was not familiar with the methods of picture manipulators, she had not benefited financially from the film, which we learn from Andrée Wright, in a book called Brilliant Careers (107). The difficulties of film financing may explain why she never made another film. Perhaps none of her other plays were successful enough to warrant the risk.

Possum Paddock (1921), however, as both play and film, was far from being a failure. According to the publication Everyone’s from May 1922, the work had been sufficiently successful to finance a ten-month tour for the whole company to South Africa, the United States, and Great Britain (21). On their return, the company continued to tour country areas with occasional city seasons, presenting revivals of Possum Paddock as well as imported plays and others written or adapted by Howarde herself. Her second bucolic comedy “Gum Tree Gully” was only a moderate success in 1924, but by then she had also moved on to writing more dramatic works. She presented “The Judgment of Jean Calvert” in Sydney in 1935, only four years before her death.

Although most of her career was on the stage, Kate Howarde has been cited as the first woman to direct a feature film in Australia. The play and screenplay of Possum Paddock survive in the National Archive of Australia, and part of the film itself also survives in the National Film and Sound Archive although in a form that does not match either script and does not make particularly good sense.