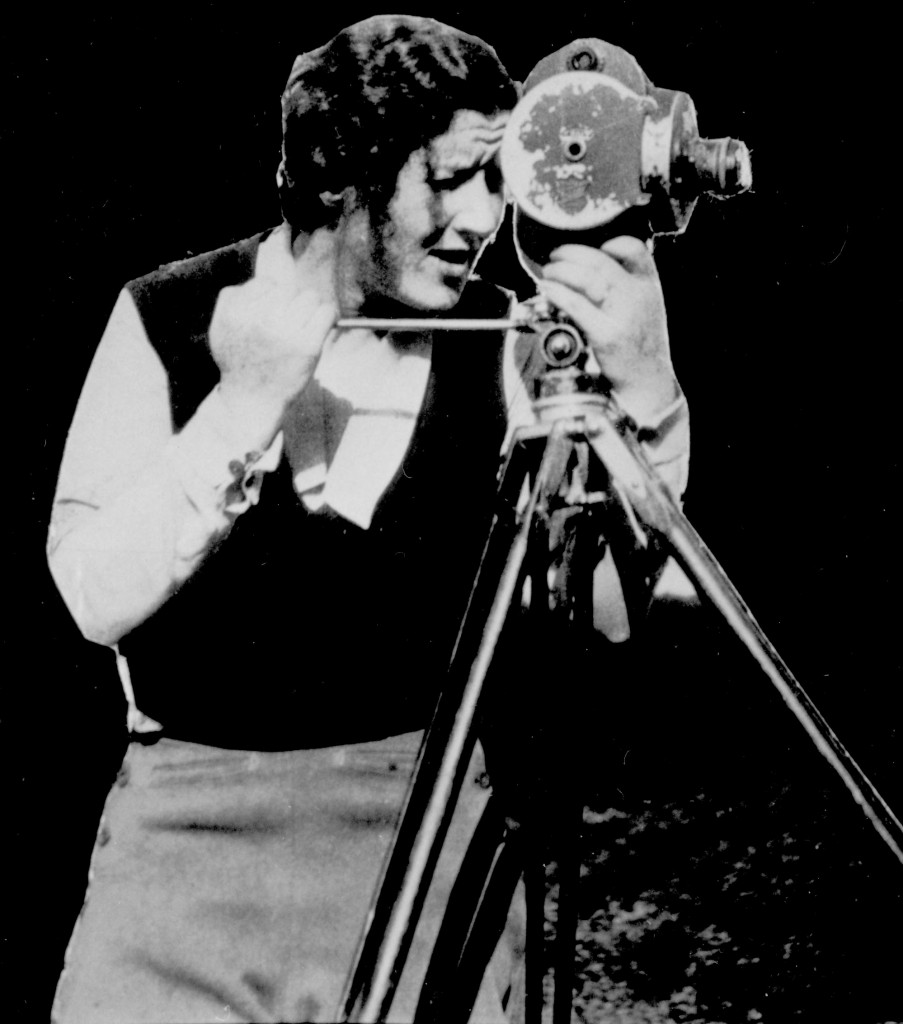 Growing up in Glasgow in the early part of the 20th century, Jenny Brown should have had a conventional upper-middle-class future, attending parties and balls, marrying a man from a “suitable” family, and living an easy life as a respectable Glaswegian society matron. But this was not at all the life Jenny Brown, later Jenny Gilbertson, was to carve out for herself. Her mother wanted her, Gilbertson told Ann Black, to “stay home, drive the car, play golf and dust the legs of the dining room table” (2010). Against her family’s wishes, she attended the University of Glasgow, where she received her MA, followed by training as a teacher. Wanting to expand her horizons, she traveled to London to study journalism, and while she was there, an event occurred that would change her life. She attended a screening of an amateur film about Loch Lomond and, with a typical burst of enthusiasm, decided that filmmaking was to be the career for her. Acquiring a 16mm Cine-Kodak camera, she taught herself the fundamentals of cinematography while shooting footage of scampering squirrels in Kensington Gardens and barges on the River Thames.

As a schoolgirl, Jenny Brown had accompanied her parents on holidays in Europe and in the remote Shetland Isles, the most northerly area of Great Britain, where her parents rented a house in Hillswick near the dramatically rugged sea cliffs that would feature so prominently in her later motion picture work. Enamored with the area and energized by her spirit of adventure, she returned in 1931, this time bringing her camera with her, determined to record the landscape and people to which she was so irresistibly drawn. The first film she made there was the 56-minute documentary A Crofter’s Life in Shetland (1931), a cyclical film portraying a year in the life of the island people, which she wrote, shot, and single-handedly edited. The film reveals Brown’s keen interest in the daily lives of the inhabitants and her ability to establish an intimate rapport with her subject matter. 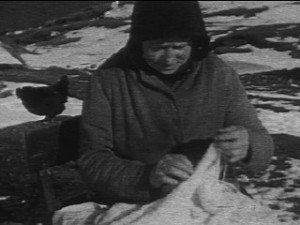 A Crofter’s Life in Shetland (1931). Courtesy of the National Library of Scotland.

The life of the country people she found on Shetland was historically and geographically far removed from the life she had led in Glasgow, but, although she arrived as an outsider, Brown quickly won the hearts of the islanders. Working as a one-women film crew, she covered events from one end of the islands to the other, from the isolated landscapes of the crofts to the relatively bustling center of the capital town of Lerwick, from the south at Sunburgh to Britain’s most northerly lighthouse, Muckle Flugga. The islanders seemed hardly aware of her presence, and her unobtrusive, early observational style allowed them to carry out their daily activities in a natural and unselfconscious way, whether digging peat, rooing sheep and knitting their wool, planting potatoes, or fishing at sea.

On February 5, 1931, Jenny Brown noted in her diary that she had seen John Grierson’s film Drifters (1929) about the herring fishing industry and was somewhat scornful of what she deemed the manipulative nature of the filming and editing of the storm at sea, although she noted in the diary that it appealed to people’s fondness for a “good story.” She was determined to present a more truthful, less spectacular version of events. 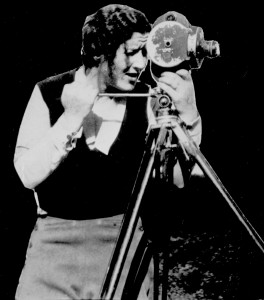 Throughout A Crofter’s Life in Shetland, women’s work is given equal status to that of the men. After shots of men fishing at sea, the film cuts to a title card announcing: “Meanwhile his wife is preparing the potato.” Women’s contributions to the household economy are emphasized. “Every woman in Shetland knits,” the caption tells us, “for it is one of the few ways they can make money.” Women are filmed with busy needles flying as they go about their daily chores, contributing to the household economy at all times of night and day. We see women doing the backbreaking work of planting potatoes, stooping along behind a horse-drawn plow as it cuts a deep furrow into the earth. Men may dig the peat, but it is the women who stack it ready for burning. Shots of fishermen unloading their boats are followed by scenes of women cheerfully gutting and packing fish into barrels.

When A Crofter’s Life in Shetland premiered in Edinburgh, John Grierson, the founder of the British Documentary Movement was thrilled, and is quoted in the 1999 Gilbertson commemorative program as saying: “For a solo effort it is an extraordinary job of work. It not only gives you very beautiful pictures of Shetland but it gets down to the life of the crofters and the fishermen, and brings the naturalness of it… Miss Brown has already broken through the curse of artificiality and is on her way to becoming a real filmmaker, an illuminator of life and movement” (n.p.). According to that program, he recommended that she upgrade her camera to a more professional model and, enthused by his encouragement, she purchased a 35mm Eyemo camera to continue her filmmaking career. Grierson offered her editing space at the renowned General Post Office (GPO) Film Unit in London for her next films and ultimately purchased the complete series for the GPO library for forty pounds. These short films attracted the attention of the Royal Geographical Society and show the development of Brown’s ability to tell a story through careful selection of shots and editing. 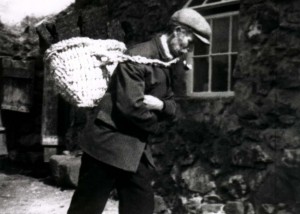 Da Makkin o’ a Keshi (1933). Courtesy of the National Library of Scotland.

One of the short films in the series, Da Makkin o’ a Keshie (1932) (a basket used for carrying peat) has been eloquently described thus: “Old Gideon accepts the eye of the camera without a glance or a word. Young director Jenny Brown soberly films his calloused hands at work, alternating the shots like for a teaching lesson. According to the Europa Film Treasures website, this close and sustained attention to ancestral practices is what made the Shetland islanders adopt ‘Jenny Broon’ from Glasgow as one of their own.” [Europa Film Treasures website now seems to no longer exist, as of Fall 2015. Eds.]

Brown next undertook her most ambitious film to that point, a 56-minute dramatized documentary, Rugged Island: A Shetland Lyric (1933), again a one-woman production that she wrote, directed, filmed, and edited herself. Starring the crofters who had appeared in her previous documentaries, along with a professional actor, Enga Stout, Brown crafted a narrative revealing not only the beauty and pleasures, but also the hardships and conflicts of life on the islands. Through dramatic sequences and remarkable compositions, Rugged Island tells the story of a young couple torn between the yearning to escape Shetland’s declining economy and the ingrained sense of moral duty to remain on the islands to care for aging parents.

While filming her earlier documentaries of Shetland life, Brown had met a young crofter, John Gilbertson, whom she cast as the leading man in Rugged Island,and romance soon blossomed between them. We learn from a 1980 program on Scottish television that Gilbertson had left school at fourteen to apprentice as a blacksmith. Although their backgrounds were dramatically different, she recalled that “there wasn’t an intellectual difference… He was a man of great dignity, great kindness, all of the things that really matter.”

Shot silent, Rugged Island (1933), also had a sound version made by London distributors Zenifilms, who added a soundtrack including commentary and music. Comparing the silent and the sound versions, we see striking differences, beginning with a male voice-over that now carries the narrative that had been told through title cards. The focus is no longer the betrothed couple strolling hand-in-hand along the cliffs, but rather Andrew, the young man, and his battle to earn a living from the sea. Enga, the voice-over tells us, is merely “Andrew’s sweetheart.” While still a poetic documentation of life on Shetland, the film undergoes a subtle shift in focus. Released in 1934, the sound version played in British cinemas for several years, although Zenifilms collapsed and Gilbertson, in undated and unpublished notes, says that she never received a penny.

To provide a living, the Gilbertsons took Rugged Island on a lecture tour throughout Britain and Canada. During the tour, Brown met Canadian Evelyn Spice, the first woman filmmaker to join the Grierson unit. They codirected Prairie Winter (1934), a dramatized documentary about the harsh conditions of the winter months on the Canadian prairies. Gilbertson commented in her unpublished notes on the way that men were engaged in eminently cinematic outdoor activities that only required existing light and that it was impossible, without artificial light, to film women’s indoor work, an observation that may help us understand the lack of shots representing women’s household work in early documentary films. The directors had to content themselves with filming a sampling of women’s outdoor chores, carrying in the frozen laundry from the line, or sweeping snow out of the yard. Although the film was shot without sound, on their return to London, the women added the sound effects they had recorded on location in Canada. The finished sound film was distributed in cinemas throughout Britain, but unfortunately only the silent version exists today. Later, after the birth of their first child, Jenny and John continued touring the film around Britain, but now with a new baby as well as the reels of film packed into the back of the car.

Jenny Gilbertson was to make three more films before the outbreak of World War II. Now, with two daughters and John in the Royal Army Service Corps, family responsibilities required her full-time attention. When her husband was invalided out of the army, she initially ran a small woolen shop on Shetland, but, realizing that business was not her calling, she accepted an offer to teach in the local school, where she stayed for the next twenty years. It was not until the 1960s that she was able to resume her filmmaking career, which, with her unique blend of passion and commitment, she carried on into her early eighties.

With additional research by Cameron Howard.

In Sheep’s Clothing (1933) via the National Library of Scotland

Da Makkin o’ a Keshie, In Sheep’s Clothing, Scenes from a Shetland Croft Life, Seabirds in the Shetland Islands, and A Young Gannet were produced and funded independently by Gilbertson. John Grierson bought them for the GPO Film Library. The sound version of Rugged Island: A Shetland Lyric was also released in 1934. According to the Scottish Screen Archive, the silent version of Rugged Island “has all the material the sound version has in roughly the same order, however there are some differences most notably in [the third reel] of the sound version where the letter/newspaper scene at the beginning differs from the same scenes in the silent version.” The sound version of Prairie Winter is not extant.